The new cocoa bean harvest kicks off in West Africa this month, and Ivory Coast, the world’s largest producer, is poised for another strong crop. In addition, global supply and demand for cocoa are decently balanced. Nevertheless, new government policies and emerging disease pressures in major producing countries present uncertainties that could boost the price cocoa buyers are forced to pay for beans.

Cocoa beans may prove to be a model case of the price and supply risks associated with concentrating crop production in a small agricultural area. Nearly half of the world’s cocoa bean production comes from Ivory Coast. Together with neighboring Ghana, Cameroon, and Nigeria, the four countries account for three-quarters of all cocoa beans.

Cacao farmers have long been paid too little of the revenue their crop generates. As a result, Ivory Coast and Ghana introduced a new $400 per tonne premium on cocoa purchases beginning next year in an effort to improve growers’ living conditions. Meanwhile, in Ghana, cacao swollen shoot virus (CSSV) is driving a large decline in that country’s cocoa production. The disease, which is also beginning to show up in Ivory Coast, is endemic to West Africa and could potentially reduce yields across the region.

Global cocoa consumption has grown an average of 3% per year for the past decade. Any supply disruptions in the principal producing areas of West Africa could be a shock to cocoa bean markets. In this Featured Insight, we model the outlook for this season’s cocoa crop using data in the Gro platform. We also assess the risks to the global cocoa supply chain from concentrating the production of such a major agricultural crop in a single region. 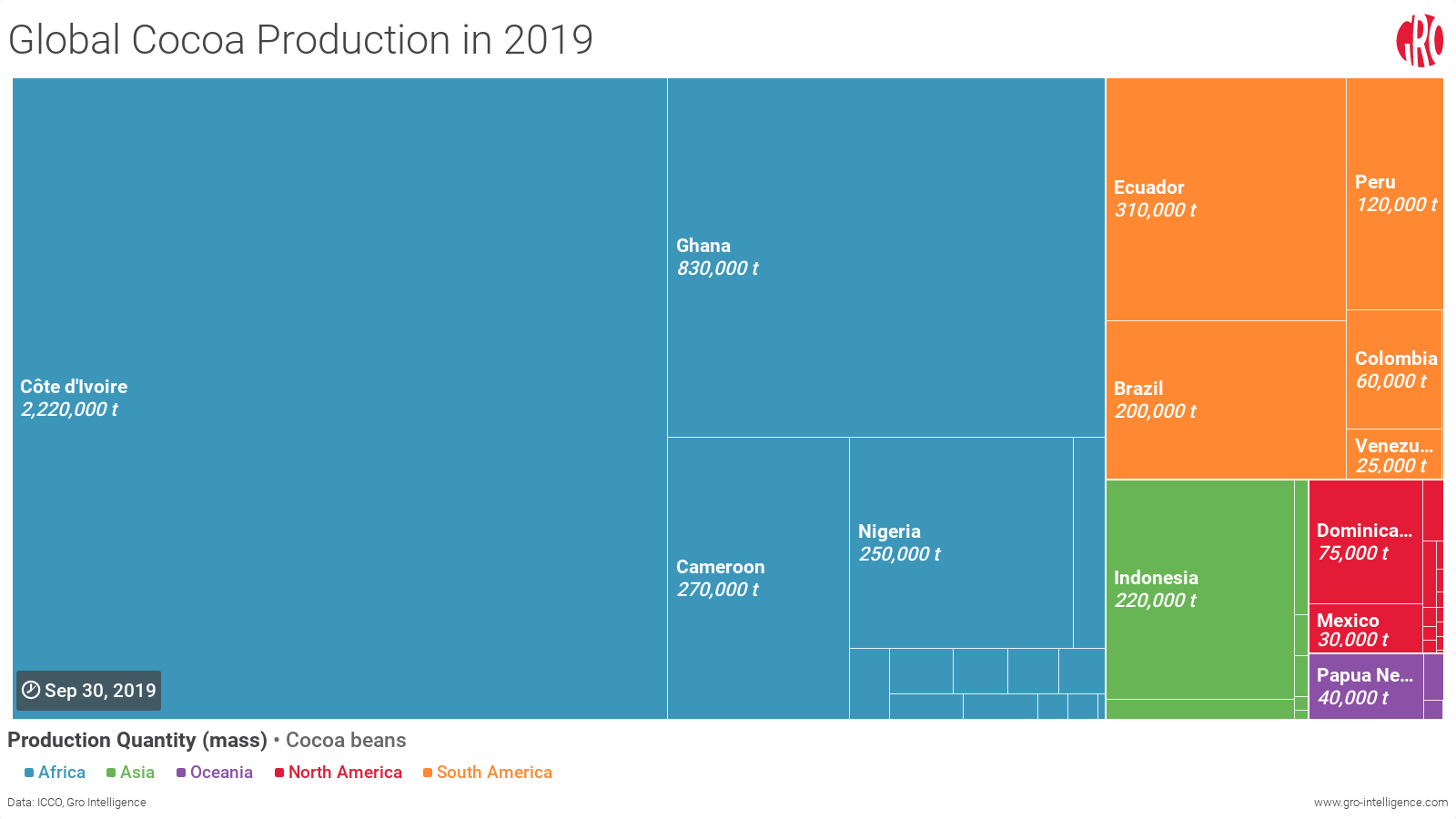 This tree map shows cocoa production levels by continent and country. Africa (in blue) dominates the global cocoa market. Four West African countries produce 74% of the world’s supply. Click on the image to go to an interactive display on the Gro web app.

Cocoa production was once more globally diversified. Brazil produced a quarter of the world’s cocoa beans as recently as the 1980s, until the fungus witches’ broom disease wiped out 70% of the country’s cacao trees. Brazil’s market share today is about 6%. Indonesia, too, was a significant producer a decade ago, but its share has since dropped from 15% to about 5%, due to aging trees and a lack of financial resources to plant new ones. Ecuador, with 6% of the world’s cocoa output, is one of the few countries outside of West Africa that has steadily increased production. The Central American country touts its role as supplying more than half of the world’s highest-quality cocoa. 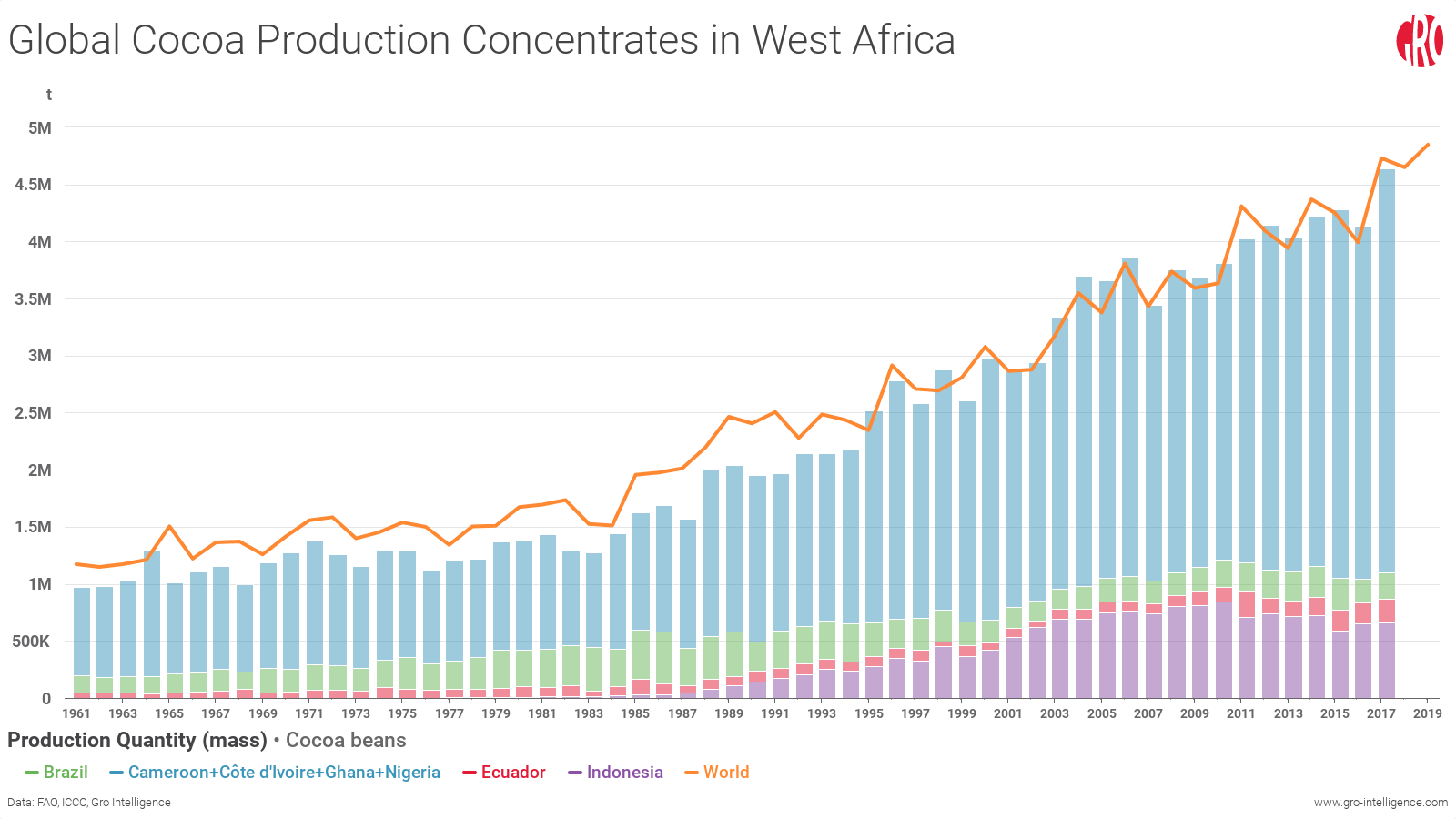 In the early 1980s, when Brazil produced a quarter of the world’s supply, cocoa bean production was spread around the globe. Since then, production in four West African countries (blue bars) has eclipsed that of all other producers. Brazilian production (green bars) has diminished, and while Indonesian production (purple bars) expanded into the early 2000s, it has since dropped off. Ecuador (red bars) is growing in the fine cocoa market. Total world production is shown as an orange line. Click on the image to go to an interactive display on the Gro web app.

Consumption patterns also have shifted. Europe and North America once accounted for some 85% of cocoa processing. Today, about a quarter of the world’s beans are processed in Asia to satisfy that continent’s growing demand for chocolate. In the first three quarters of 2019, Asian cocoa grinding grew 14% from a year earlier, while remaining flat in Europe and North America. West African cocoa bean producers have also begun grinding beans within their own countries to capture a greater share of the value chain. In Ivory Coast, for instance, the cocoa industry provides income for two-thirds of the country’s workers. Today, Africa grinds more than a quarter of its own beans. 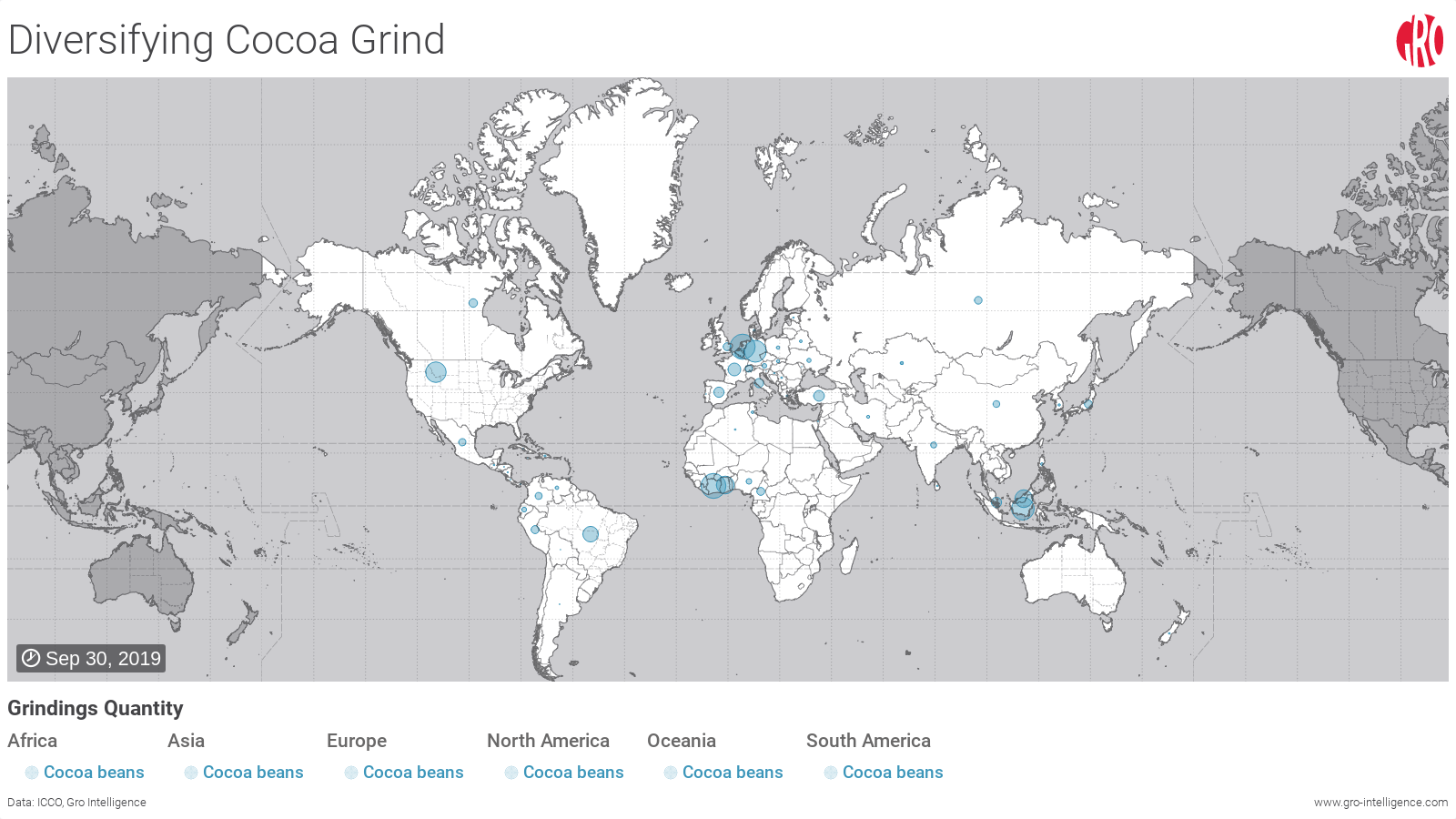 While Europe and North America once ground 85% of the world’s cocoa beans, the demand for cocoa has spread and, with it, the location of processing operations. Africa and Asia now process 45% of global cocoa. The map above shows cocoa grind levels for the 2018/19 marketing year by country. Click on the image to go to an interactive display on the Gro web app.

Cocoa’s concentrated area of production in West Africa means that localized weather has an outsize impact on the global crop size. The region’s long growing season, however, helps offset the impact when short-term weather conditions deteriorate. Ivory Coast and Ghana harvest cocoa throughout the year, producing two crops. The larger, main crop is harvested from October to March while the less productive midcrop harvest goes from April to September. A weak main crop harvest is often followed by an above-average midcrop harvest, which can result in relatively stable annual production growth.

Longer-term climatological events such as El Nino have a dampening effect on cocoa production. A strong positive El Nino Southern Oscillation (ENSO) signal has been linked to dry weather in West Africa and weak cocoa bean yields. Likewise, strong harmattan winds, which rise from the Sahara Desert between November and March, can cause mid-crop cocoa production to fall. 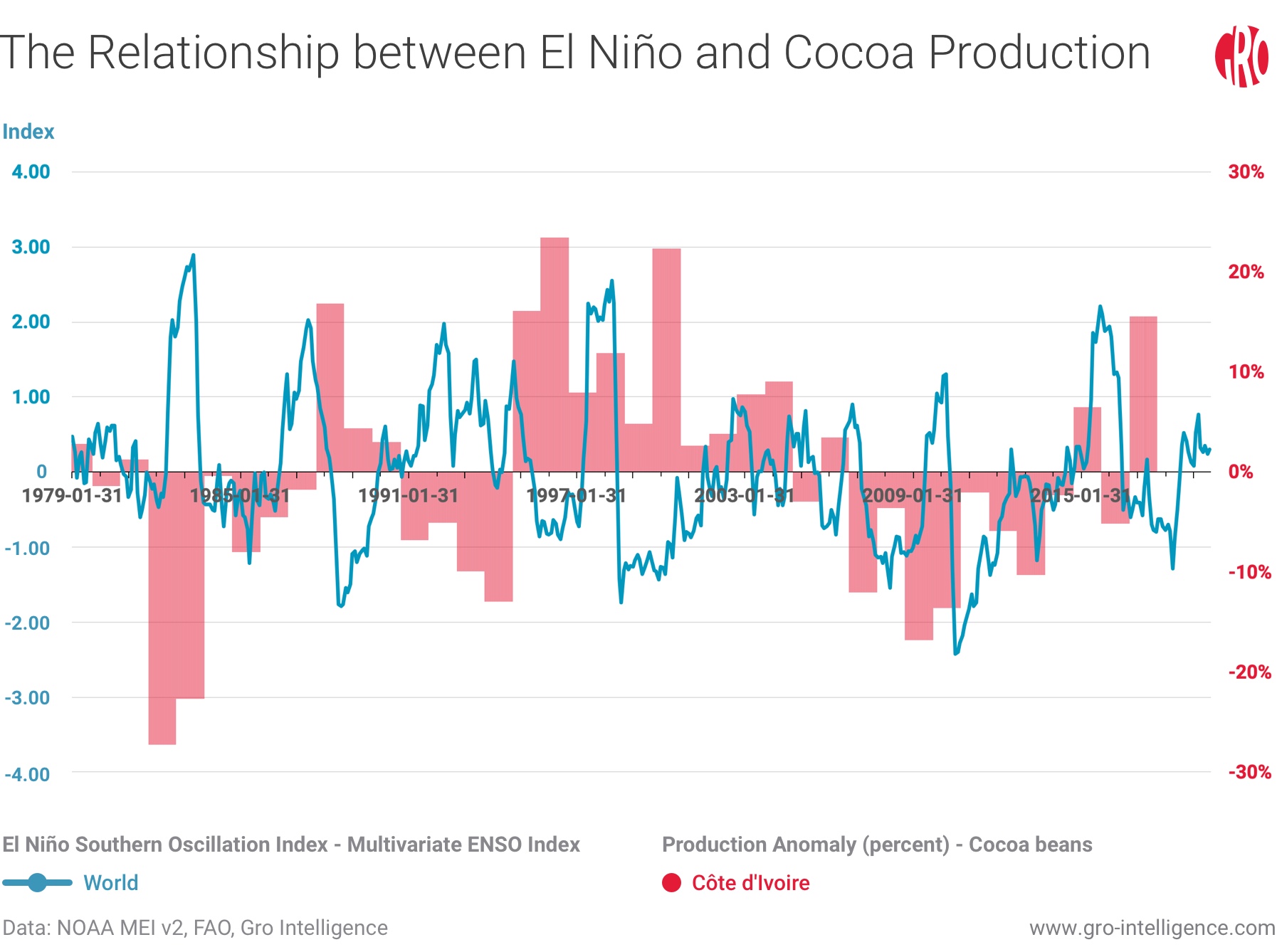 Numerous climate data sets available in Gro’s platform can be used to predict cocoa production. Since it is a tree crop, NDVI, an indicator of vegetative health, and evapotranspiration are not as predictive as precipitation, soil moisture, and temperature. A simple comparison between accumulated precipitation and production anomalies shows a strong 83% correlation between production strength and rainfall in the three months leading up to the main crop harvest. Last year, precipitation totals for the July through September period were more than 4 inches above normal, and Ivory Coast production at 2.2 million tonnes was more than 9% above trend. In 2012 and 2015, however, rainfall accumulations from July through September were 3.5 inches below normal, and production was 7% and 13%, respectively, below trend.

This year has brought some concerns related to heavy October precipitation. However, the flow of cocoa beans to Ivorian ports is so far running 14% above year-ago levels. In fact, Gro’s precipitation-based estimate implies another strong crop for Ivory Coast in 2019. While it's still early in the season, July through September precipitation totals were 2.5 inches above normal this year. Based on the historical relationship between precipitation and production, cocoa bean production in Ivory Coast looks to be about 7% above trend over the next year. Adding ENSO data to the analysis supports the outlook for a strong cocoa harvest in Ivory Coast. The Multivariate ENSO Index (MEI) currently sits at a neutral reading of positive 0.30. 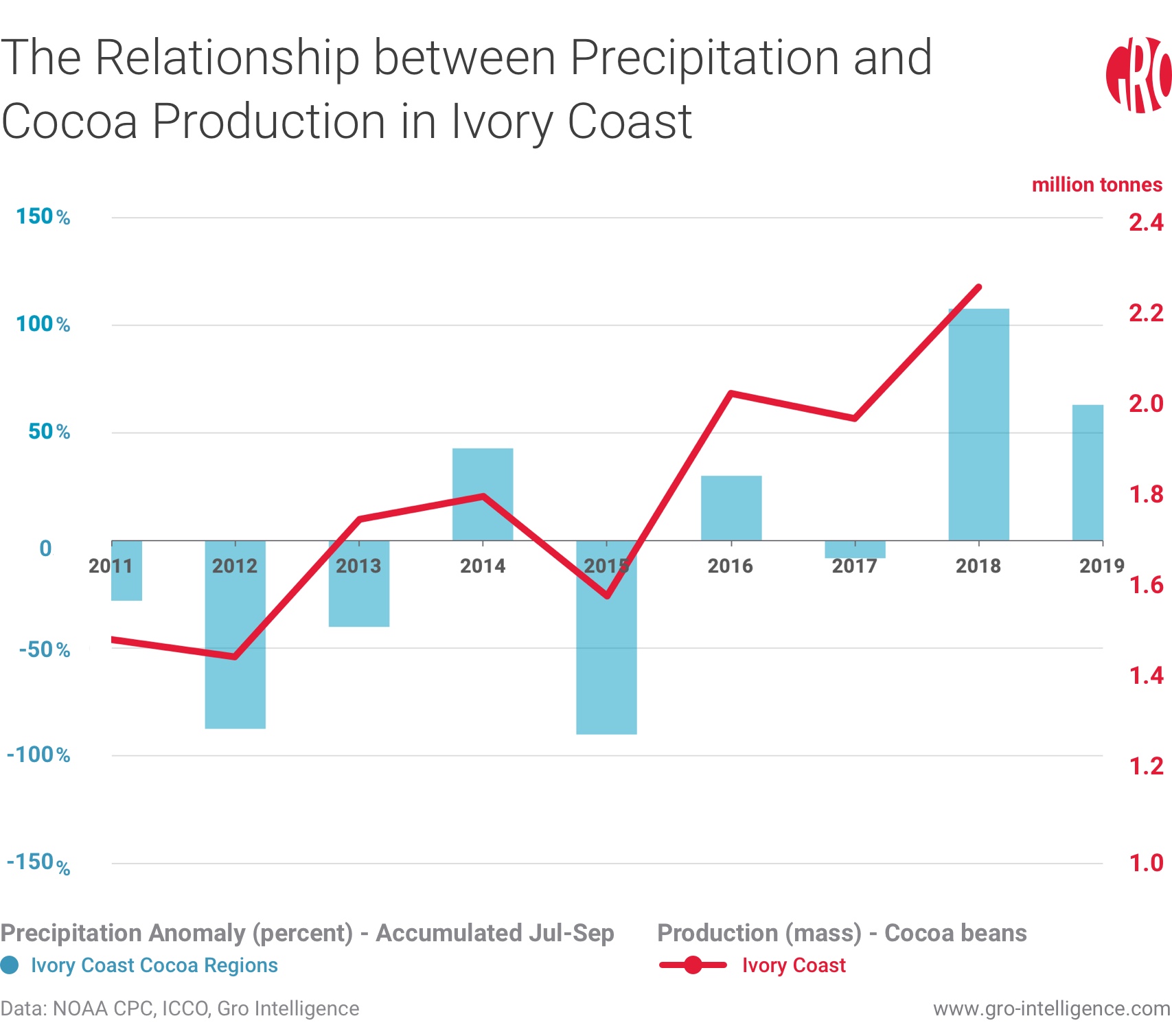 Accumulated precipitation in Ivory Coast’s cocoa producing regions (blue bars) during the three months leading up to the main cocoa harvest prove to be well correlated with Ivory Coast cocoa production anomaly (divergence from the historic trend). Historic Ivory coast cocoa production can be seen in the red line. Strong rainfall totals from July through September this year imply another strong cocoa crop in the world’s largest producer.

Risks to World Supplies and Prices

Ivory Coast and Ghana’s joint price-control decision, announced in July, seeks to boost how much cacao farmers receive by requiring buyers to pay a $400 per tonne premium on their cocoa bean purchases from the two countries. The funds will be used to ensure farmers receive a so-called living wage of at least 70% of a $2,600/tonne price target. Exactly how the new fee, which takes effect October 2020, will be assessed is still unclear, but the impact is already being felt. It introduced a great deal of uncertainty and has prevented large cocoa buyers from hedging their demand.

Since the new fee was announced, cocoa stocks at Intercontinental Exchange (ICE) warehouses in the United States have been depleted. The ICE delivery mechanism serves to ensure convergence between spot prices on the cash and futures market. Traders deliver excess supplies to the exchange when prices are higher than they can obtain elsewhere, and buyers can choose to take delivery of warehouse stocks when futures prices are weaker than those otherwise obtained in the cash market. Between the end of August and early October, stocks in ICE warehouses fell 44%. Many see the demand for warehouse stocks as an indication that end users are unable to contract their future bean supplies from West Africa due to the uncertainty introduced by the planned price controls. 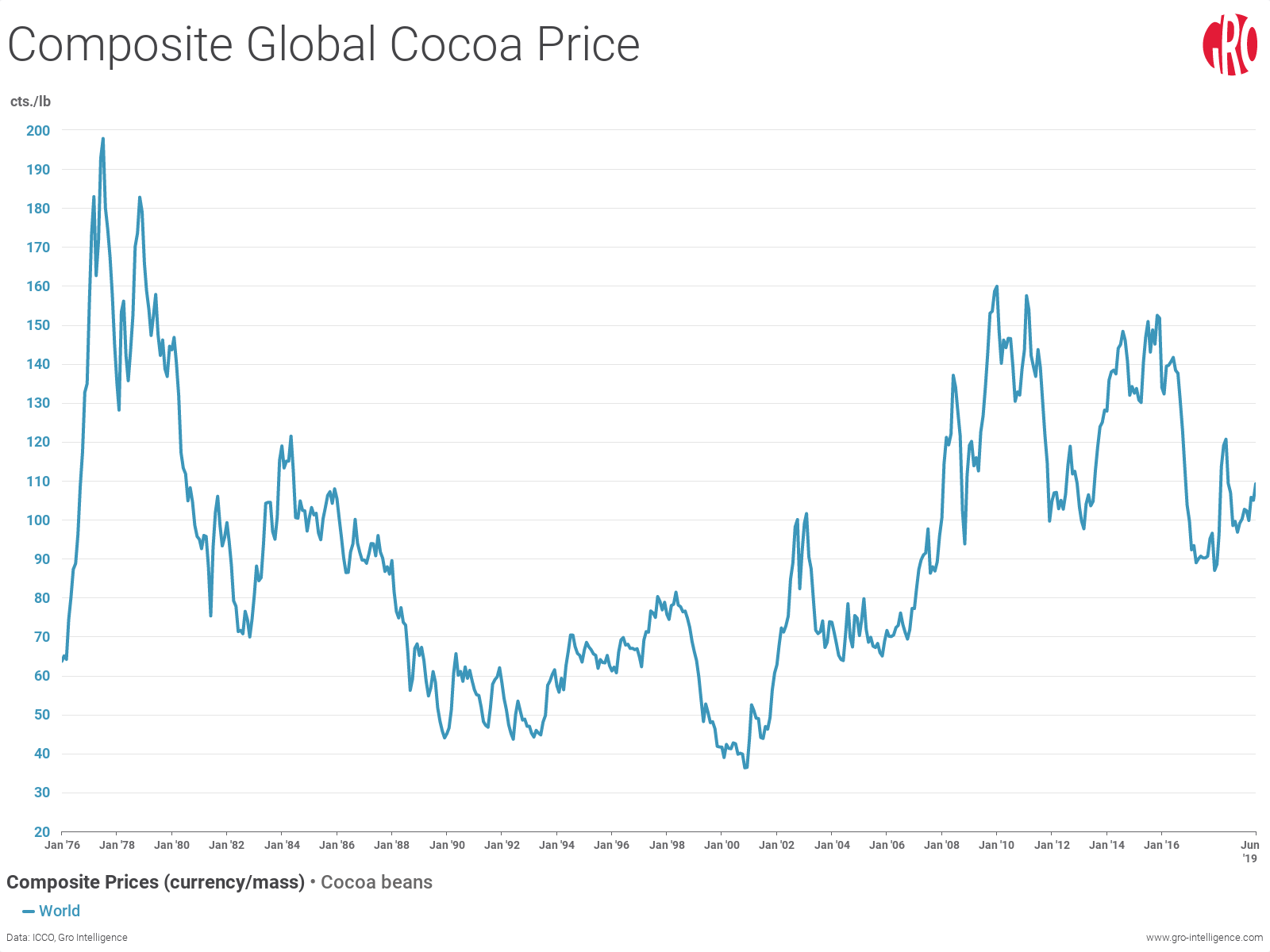 This chart shows the International Cocoa Organization’s composite cocoa price over the past 43 years. The composite represents origin-level prices. Prices have been on the rise since Ivory Coast and Ghana recently announced a new $400/tonne charge on cocoa bean prices. Click on the image to go to an interactive display on the Gro web app.

According to supply and demand data from the International Cocoa Organization (ICCO), production exceeded supply in the 2018/19 marketing year, which ended on Sept. 30. The ICCO estimates stockpiles rose by 66,000 tonnes. Ivory Coast produced a bumper crop in 2018/19, 13% above the prior year, which offset a second year of declines in Ghana. Ghanaian production fell 8% to 830,000 tonnes, following a similar-size drop in the previous year. Ghana’s production declines have been driven by cacao swollen shoot virus (CSSV), which has led the industry to replant 400,000 hectares of cocoa plants.

CSSV, which is spread by insects, causes productivity declines in the first year of infection and then typically kills the tree within four years. The recommended response is to remove infected trees and create a buffer zone around newly planted trees. Cocoa trees take three to five years before they’re mature enough to produce pods.

So far, Ivory Coast has managed to avoid major CSSV-related damage. Although the country has been dealing with the disease for many years, its impact was limited to central regions. Losses have been offset by gains in other parts of Ivory Coast. Now, the disease is starting to show up in southern and western areas of the country where 60% of cocoa production is sourced.

Ghana has lost 14% of its cocoa production largely to CSSV over the past two years. A similar cut to Ivory Coast production would trim 320,000 tonnes of cocoa from world supplies. That’s almost 20% of global 2018/19 ending stocks.

Near-complete global reliance on such a small microregion to produce cocoa beans makes the commodity particularly susceptible to supply shocks. It also gives the Ivorian and Ghanaian governments confidence that they can join forces to impose new price controls starting next year. While there’s still uncertainty about how the new rules will be implemented, global markets are already feeling the impact. Global cocoa buyers have very limited ability to shift to other origins to avoid higher costs. Add to this an increasing risk associated with disease pressures in the region, and there’s a significant incentive for cocoa expansion in once-productive cocoa growing areas such as Brazil and Indonesia, as well as in Ecuador. Years of strong growth in Ivory Coast have so far masked the risks of geographic concentration of cocoa production and kept global prices in check. However, it won’t take much to shift the story. 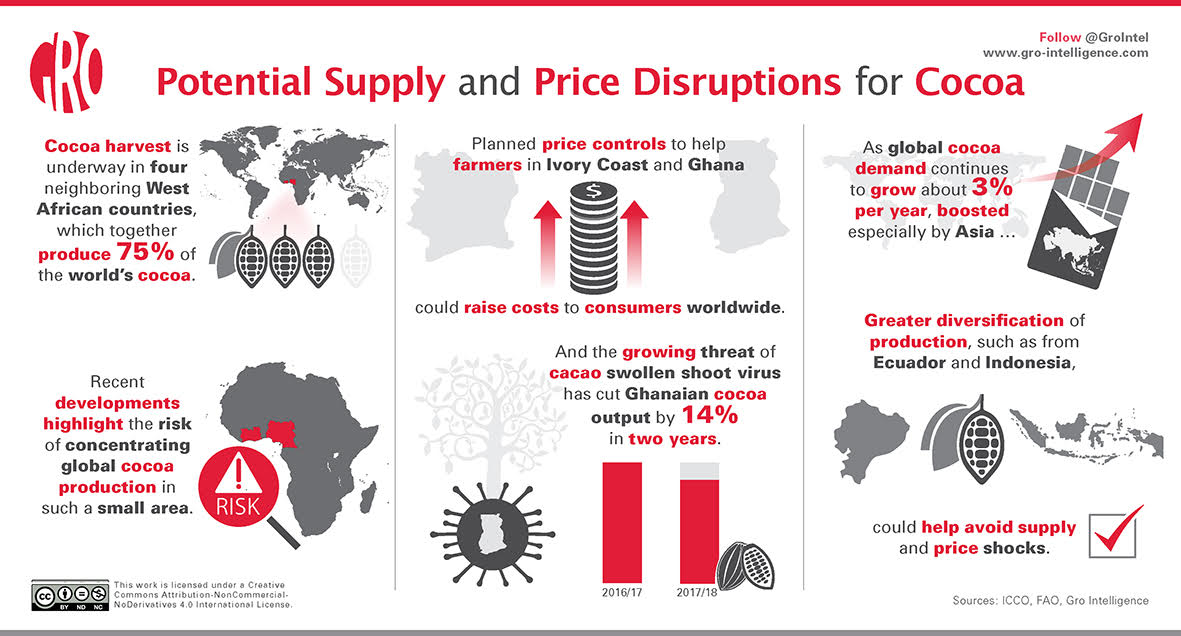 Ivory Coast Cocoa Could be Hurt by Changing Weather Patterns