Brazil has taken advantage of the US-China trade war to continue its drive for soybean expansion, even as US farmers retrench. The South American country has added 65% to its soybean planted area in the past decade, with 3% growth expected this year. Crop yields are also forecast to move higher, following gains totaling 23% in the past 10 years. And Brazil is giving high priority to internal logistics, such as improving key transportation routes and expanding port capacity, to smooth the path of getting its soybeans to world markets.

This year, Brazil’s crop size is expected to best the US by a stunning 27%. By contrast, US output topped Brazil’s by 10% as recently as 2015. To be sure, China has played a big role in those countries’ reversed positions. Beijing has levied tariffs on US soybeans as part of the trade war and has proposed a billion-dollar investment in Brazilian infrastructure to secure long-term supply of the soybeans it needs.

In this Featured Insight, we examine conditions for this year’s soybean crop at the start of Brazil’s new growing season, including rainfall amounts and evapotranspiration rates around the country. We also assess Brazil’s continuing efforts to expand both its soybean production and exports. 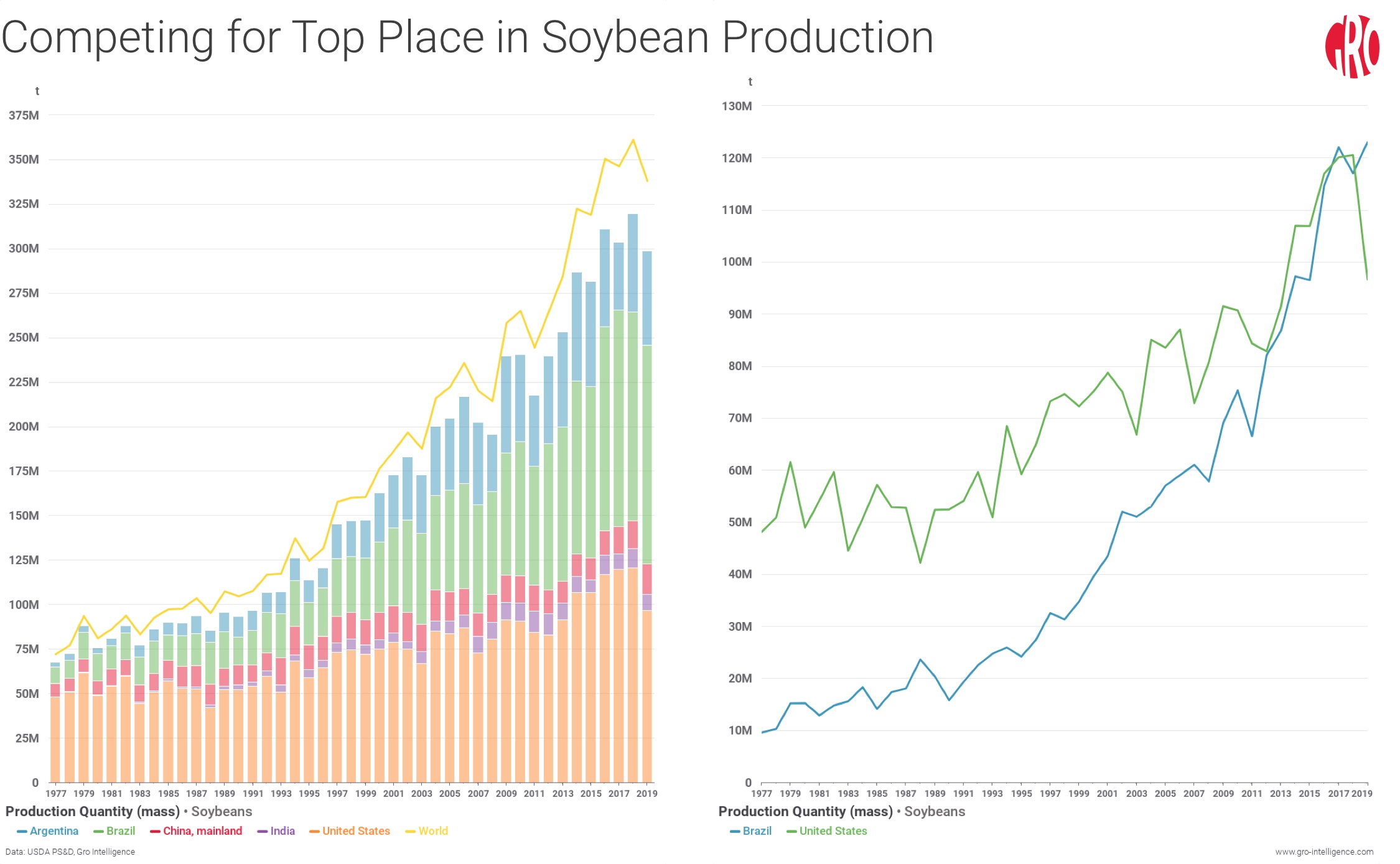 Brazilian soybean planting got off to a slow start this year, as growing areas in Mato Grosso, the main producing state, saw little to no rain for the first half of September. Gro’s satellite-derived rainfall total for the state registered just 4 millimeters in that period, less than one-fourth of the normal amount. Rains picked up in Mato Grosso by the end of September, while Paraná, Brazil’s second-largest soybean producing state, didn’t receive adequate rainfall until November.

Nationwide planting was just 1% complete at the start of October, but farmers have managed to catch up. Soybean planting was 70% complete at the end of last week, in line with the five-year average planting rate. Still, Gro’s evapotranspiration data shows generally dry conditions persist in parts of Mato Grosso and much of Mato Grosso do Sul, the fifth-biggest producing state. 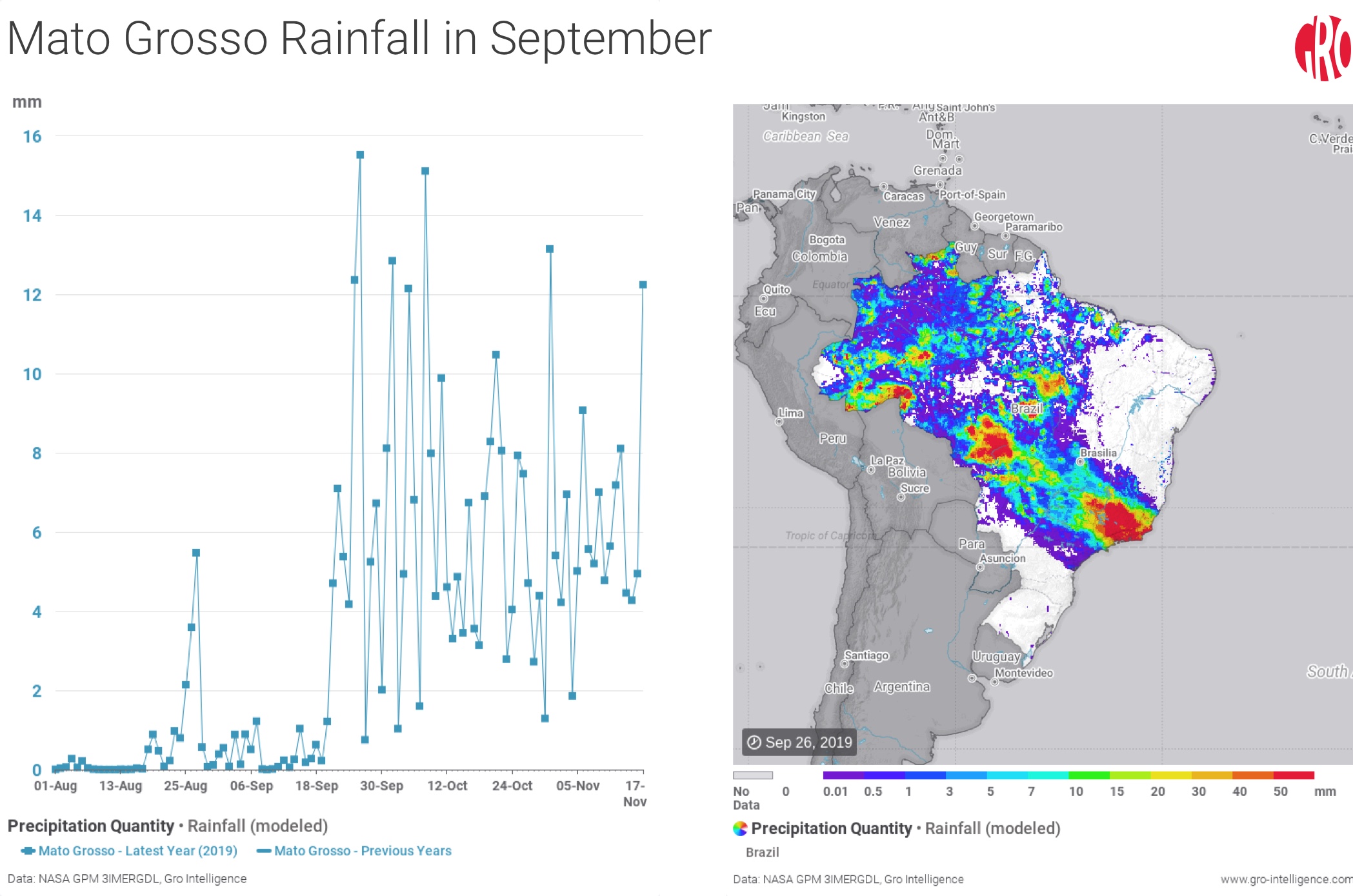 While soybean planting in Brazil was initially delayed this year, late September rains allowed quick gains in planting progress. The chart on the left, using NASA GPM satellite data, shows daily rainfall in Mato Grosso, the biggest producing state. On the right, a map shows rains crossing Brazil’s key growing areas on Sept. 26. Click on the image to go to an interactive display on the Gro web app.

For the current growing season, the USDA projects that soybean harvested area in Brazil will increase by 3% from last year. Production will rise to a record 123 million tonnes, based on greater planted area and rising yields. This past year, 117 million tonnes were produced, and the previous record was set in 2018 at 122 million tonnes.

By comparison, US soybean production is expected to fall to 97 million tonnes this year, from 121 million tonnes in 2018, as yields decline and farmers have shifted toward planting more corn. While the sharply widened gap between Brazilian and US soybean production this year is largely driven by the US-China trade war, the rapid pace of the move is nevertheless historic.

Despite the delayed start to planting, Brazilian farmers are expected to begin harvesting in January, which is early in historical terms. Soybean harvest dates have generally been moving earlier in Brazil as farmers adopt new agronomic practices and planted area expands to warmer climates in the north. Last year was a record for early harvesting. Early planting, especially in Mato Grosso, meant some crops were ready as soon as December, which boosted Brazil’s soybean exports in January and February. That also allowed an earlier start for Brazil’s so-called safrinha corn crop. Brazil’s climate permits much of the country to produce two crops per season, if the first crop isn’t delayed.

Narrowing the US Trade Advantage

Just a few years ago, a January start to Brazil’s soybean harvest was seen as remarkable. Traditionally, the United States has been the dominant global soybean supplier from October through February, when new crop soybean supplies began to arrive at Brazilian ports. Brazilian shipments ramped up in March, and the country supplied most of the world’s importers until the next US harvest.

Earlier Brazilian harvests have allowed the country’s farmers to narrow the window when the US is the exclusive supplier. They have a clear incentive for doing so, as farmers who are able to supply the global market early can capture a higher price for their product before markets become flooded with new crop supply. An earlier harvest also allows Brazilian soybeans to capture a greater share of world demand at the expense of the United States.

In 2018, a record early Brazilian harvest cut the US export window from five months to three months. Chinese crushers, restricted from sourcing soybeans from the US because of the trade war, had an alternative source of supply, in Brazil. In the first two months of 2019, when the US would normally have market dominance, Brazilian soybean exports were up 65% while US soybean exports dropped to their lowest levels since 2013, a year in which crops suffered because of drought. 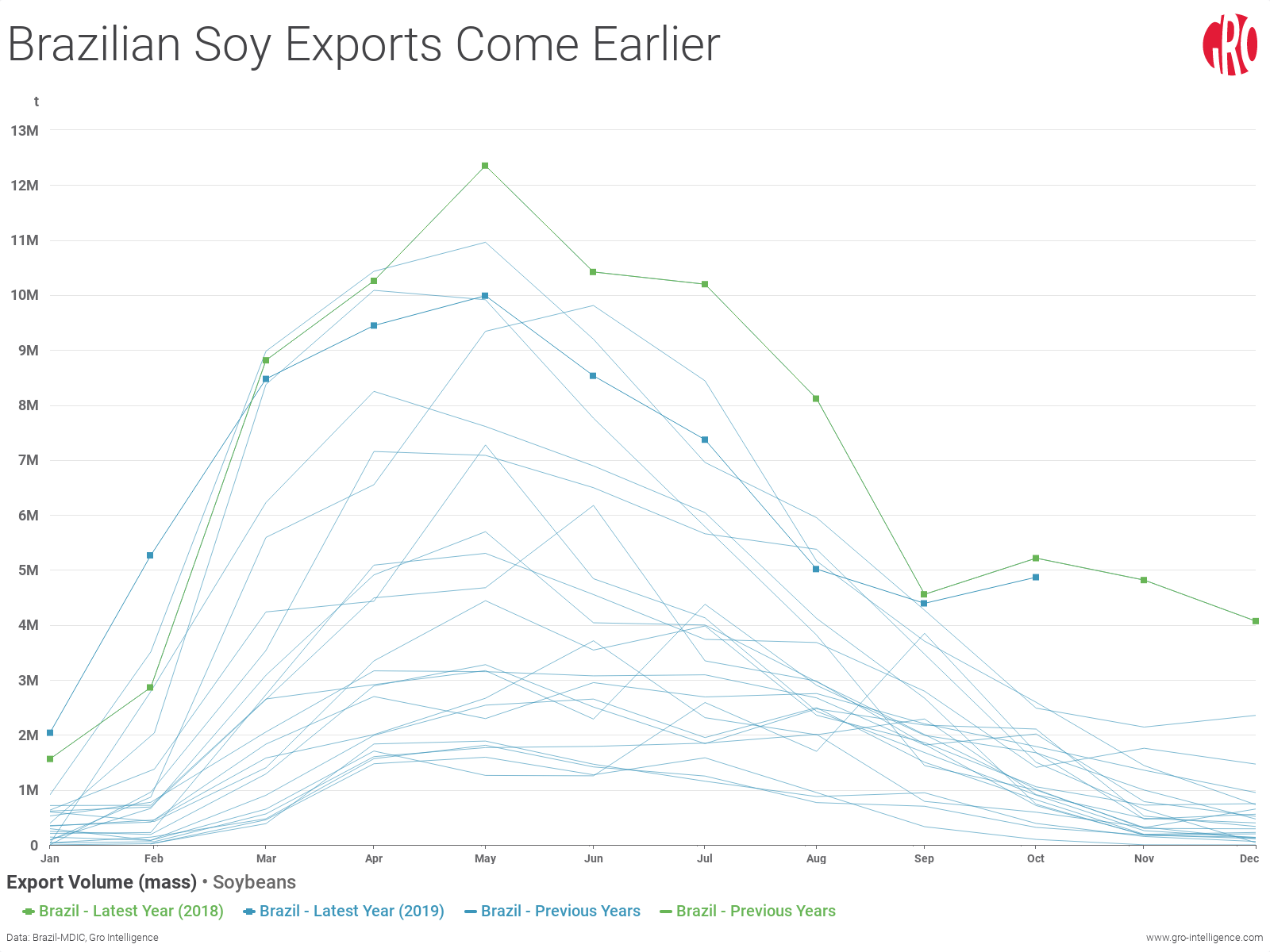 Last year’s exceptionally early harvest in Brazil triggered unusually large soybean exports from December 2018 through the following February. This chart, using data from Brazil’s MDIC, shows the historical seasonality of Brazil’s soybean exports, which typically slowed from October through February as supplies from the US flooded the market. Calendar year 2018 is shown as a marked green line and 2019 as a marked blue line. Other lines show earlier years for comparison. Click on the image to go to an interactive display on the Gro web app.

Brazil overtook the US as the world’s largest soybean supplier just two years ago (the US still dominates in world corn production). It’s been an exceptional rise for Brazil, which saw its soybean production more than double in just 10 years. Soybean planted area has expanded by 65% and yields have grown by 23%. However, Brazilian farmers’ ability to expand production hasn’t been matched by infrastructure improvements.

In the US the Mississippi River runs through the center of the soybean belt, providing efficient access to the world via US Gulf shipping facilities. In Brazil, many soybean exporters are reliant on truck transportation, and the trip from the center of Mato Grosso to the port of Santos is over 1,200 miles. The US-based Soy Transportation Coalition, citing USDA data, reported that at the end of 2018 the cost to ship a tonne of soybeans from northern Mato Grosso to Shanghai was $109. In the US, by contrast, it cost just $84 to get a tonne of soybeans to Shanghai from Davenport, Iowa. The transportation cost differential directly affects Brazilian farmers, as higher costs mean farmers receive a lower price for their soybeans. 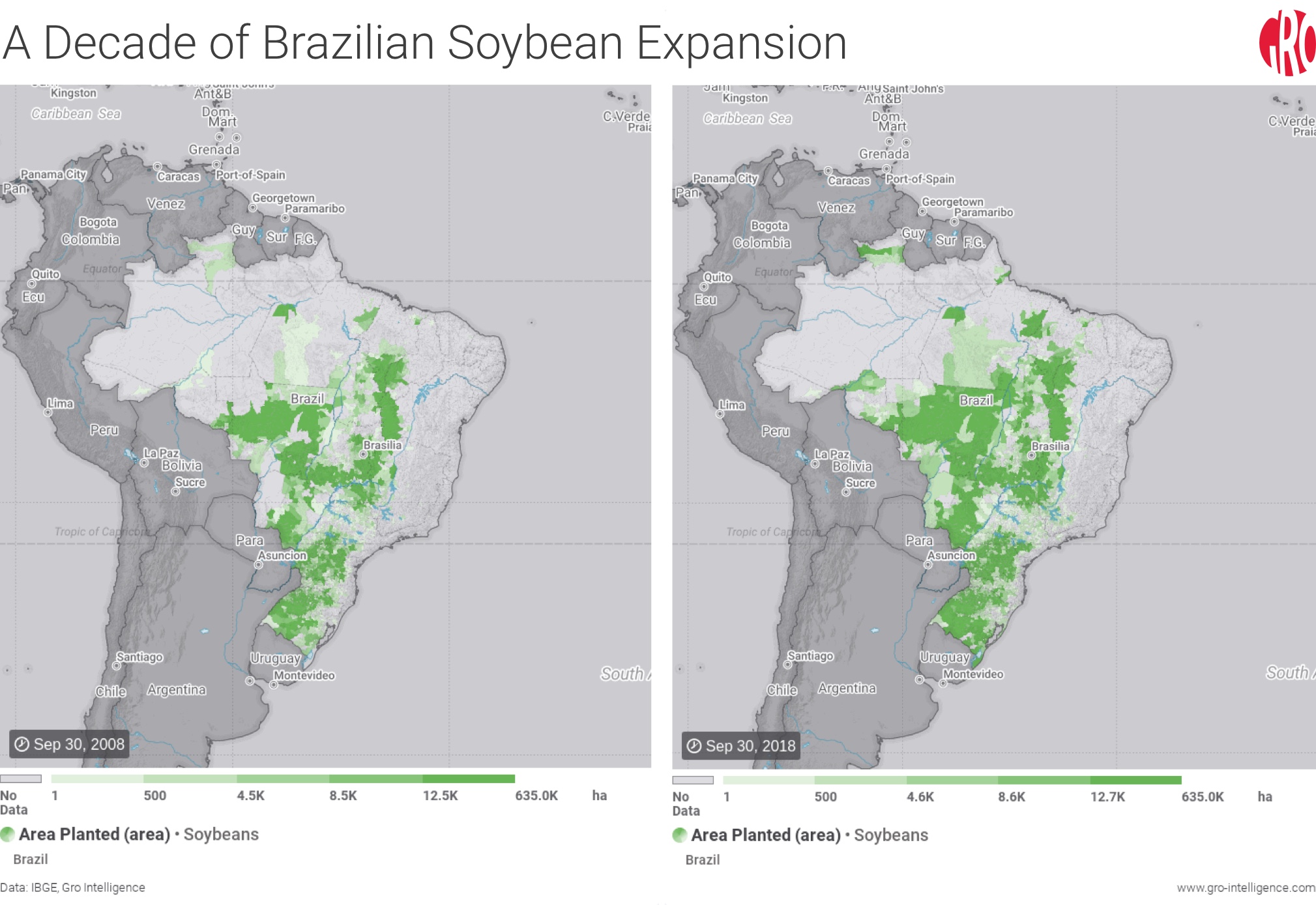 Over the past decade soybean area in Brazil has expanded northward to take advantage of increasing export flow from northern ports. The MaToPiBa region and Pará state in the far north have seen significant area gains, in addition to continued expansion in the traditional growing area of Mato Grosso state. These maps, created with data from IBGE, show the area planted for soybeans in the country in 2008 (left) and 2018 (right). Click on the image to go to an interactive display on the Gro web app.

To help reduce transportation costs, Brazil over the past 10 years has expanded access to ports in the northern half of the country. Exports from those ports doubled between 2011 and 2018, and Brazil is making additional investments to further increase access and shipping capacity from its northern ports.

President Jair Bolsanaro has made infrastructure improvements an important focus of his administration. Among a number of planned projects that could get a boost: linking northern and southern rail lines to connect the Itaqui/São Luís port in Maranhão state to the port of Santos in Sao Paulo state, and constructing a new rail line connecting northern Mato Grosso to the Amazon River, from where shipments could be barged to the coast.

An important infrastructure project targeted for completion within the next year is to finish paving BR-163, the primary highway connecting Mato Grosso to the northern port of Santarem along the Amazon River in Pará state. About 60 miles of the road had remained unpaved, limiting transportation during the rainy season just when soybeans are being harvested. Industry analysts have estimated that improved travel along BR-163 could trim transportation costs for soybeans and corn by between 20% and 30%.

Meanwhile, China and Brazil are in discussions regarding a billion-dollar Chinese investment in the northern São Luís port and the rail lines linked to the port. Brazil’s infrastructure expansion also benefits China, by cutting costs and ensuring predictable supply.

Growing demand at Brazil’s northern ports has spurred a northward expansion of the country’s soybean growing area. For much of the past quarter century, most new farmland in Brazil was created in key growing states such as Mato Grosso. In recent years, however, farmland expansion in the north has accounted for a quarter of national acreage growth.

Planted area in the newly important northeastern MaToPiBa region (made up of Maranhão, Tocantins, Piauí, and Bahia states) has doubled over the past decade, while soybean area in the state of Pará has grown nearly eightfold. Together, the five states now comprise 14% of Brazil’s total soybean planted area. Producers in those states have easier access to world markets through Brazil’s northern ports than do their counterparts deep in Mato Grosso, and have therefore benefited from higher farm-gate prices. 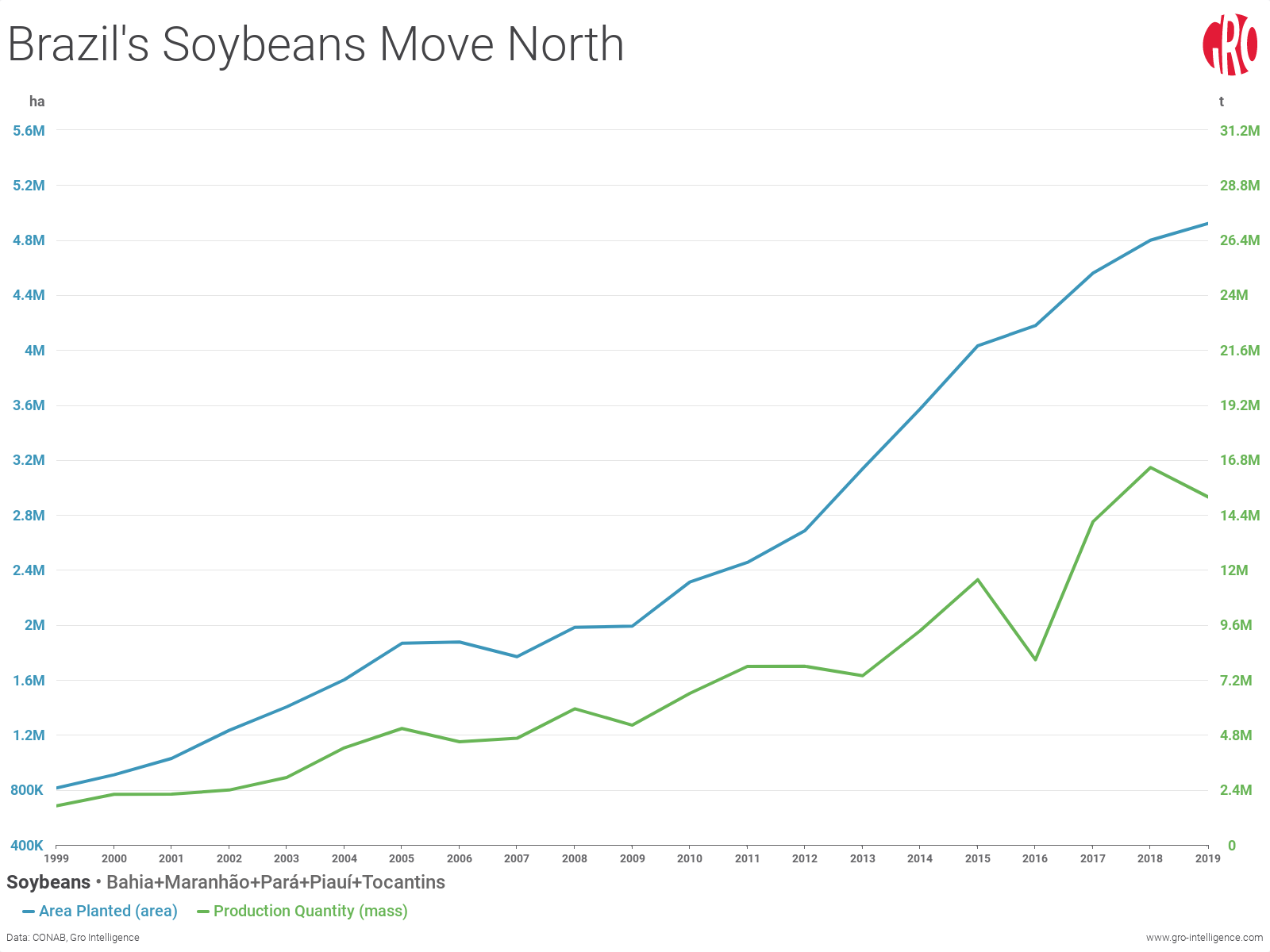 Soybean production area in Brazil’s northern states has more than doubled over the past decade and now accounts for 14% of the total soybean growing area. This chart, using data from CONAB, shows growth in planted area (blue line) and production (green line) in the MaToPiBa region and Pará state. Click on the image to go to an interactive display on the Gro web app.

The acreage growth has come at a steep price to Brazil’s rainforest, and recent high demand for the country’s soybeans in world markets has incentivized farmland expansion. Indeed, clearing of rainforests has accelerated this year, and recent wide-ranging fires in forested regions have sparked international concern about the Bolsonaro administration’s environmental priorities. Some EU member states threatened to oppose a newly struck EU-Brazil trade deal, and Bolsonaro sent Brazil’s army to combat the fires.

Growing Brazilian soybean production shows no signs of stopping, with yields trending higher and deforestation continuing to allow farmland expansion. As Brazil resolves long-standing logistic bottlenecks, it lowers transportation costs and boosts the value of farmers’ crops. China’s ongoing trade war with the US has placed previously unseen demands on Brazil’s system, and the country has proved a capable supplier—it managed to export more than 4 million tonnes of soybeans in 19 of the past 20 months, a signal achievement.

Although the US-China trade war will eventually end, Brazil appears to have cemented its place in the top ranks of world soybean producers. China, meanwhile, is working to secure a foothold in the country via investment in Brazil’s ports and other infrastructure. So, as China rebuilds its hog herd after an unprecedented outbreak of African swine fever, Brazil is well positioned to supply the resulting increase in Chinese soybean demand. 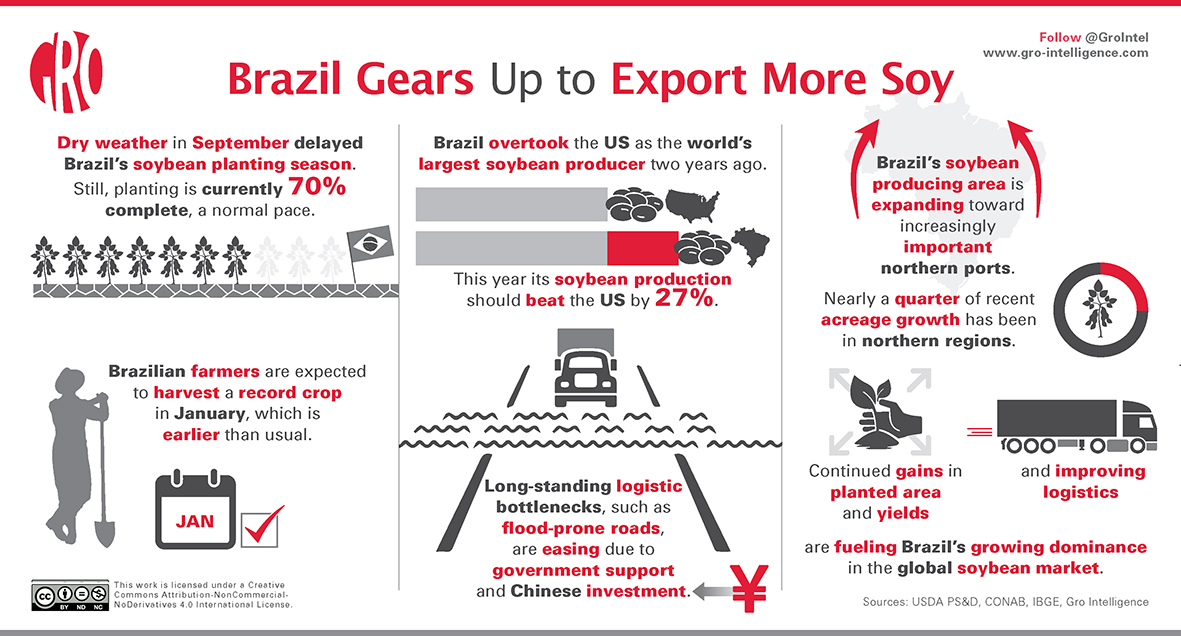 What a China/US Trade Peace Could Mean for Soybean Stocks, Prices

Tracking the Nexus of US, Brazil, Argentina, and China Soybean Trade

Surprised by the Abundance of Corn Acres? Blame Soybeans

With Soybean Yields a Mystery to Many, Here’s What Gro Predicts