Brazil May Have 71M Tonnes and 1M Hectares of Unneeded Sugarcane

Brazil’s long-ailing sugarcane processing industry is taking another hit as the COVID-19 pandemic slashes fuel use worldwide. In Brazil ethanol made from sugarcane and gasoline compete directly at filling stations. Brazilian sugar industry group UNICA reports ethanol sales in the key center-south region dropped 20% in late March. And in recent weeks, vehicle movement on Brazil’s roads has been further restricted.

Cane that is not crushed now could be processed later in the season if travel restrictions ease and economic activity picks up, causing demand, price, and sugarcane crush rates to adjust. With normal seasonal patterns disrupted by COVID-19, it will be important to monitor harvest and processing rates along with growing conditions.

UNICA’s first semimonthly crush report of the season was just released. In the first two weeks of the season, mills sharply cut the amount of cane used to produce ethanol. 60% of sugarcane was processed into ethanol in the period compared to 77% in the same period last year. Mills haven’t reduced sugarcane crush rates, however. Cane crush was up 61% year-over-year in the first half of April to 22 million tonnes. Both crush rates and the amount of cane used to produce sugar were at their highest levels since 2016.

Gro users can monitor Brazilian sugarcane crush rates and ethanol and sugar production, and compare these with historical figures. Gro’s numerous climate and geospatial data sets, such as NDVI which measures crop abundance and health, are also available. 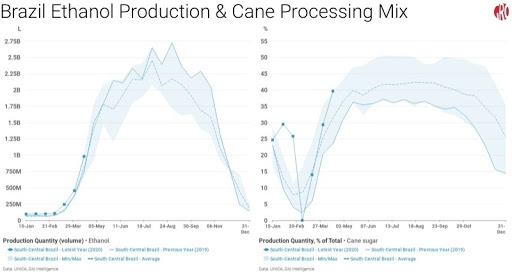 Other relevant Brazil sugarcane displays on Gro can be found in the links below:

Agriculture and Climate Markets in 2021 and Beyond