Global sugar prices may finally be about to break out from their yearslong slump.

Ballooning world supplies pushed sugar prices to a 10-year low last fall of 9.83 cents per pound on the ICE US futures exchange, and prices have languished since then. The International Sugar Organization (ISO) predicts a second straight year of surplus sugar production for 2018/19, lifting global stocks to yet another record. The USDA, for its part, estimates a small deficit this year that will reduce world sugar stocks by 1 million tonnes to 51 million tonnes.

Looking ahead to 2019/20, there are burgeoning signs of optimism for sugar prices. Brazil, the top producer, continues to divert most of its sugarcane to ethanol, limiting sugar supplies. No. 2 producer India, coming off a huge crop last year, will see losses from lower sugarcane acreage and reduced yields due to a poor monsoon. And in Western Europe record high temperatures this summer have stressed the region’s sugar beet crop.

In early June, the ISO released its initial estimate for a 3 million-tonne deficit in 2019/20 sugar balances. But developments since that forecast was made indicate that the coming year’s production deficit, and the resultant cut in world stocks, could be much greater.

In this Featured Insight, we examine the recent drop in prospects for sugar crops around the world, and what that means for global supplies and prices. Our analysis of sugar growing conditions relies on satellite-based data sources on the Gro Intelligence platform that include SMOS soil moisture readings, TRMM measurements of precipitation, and evapotranspiration. 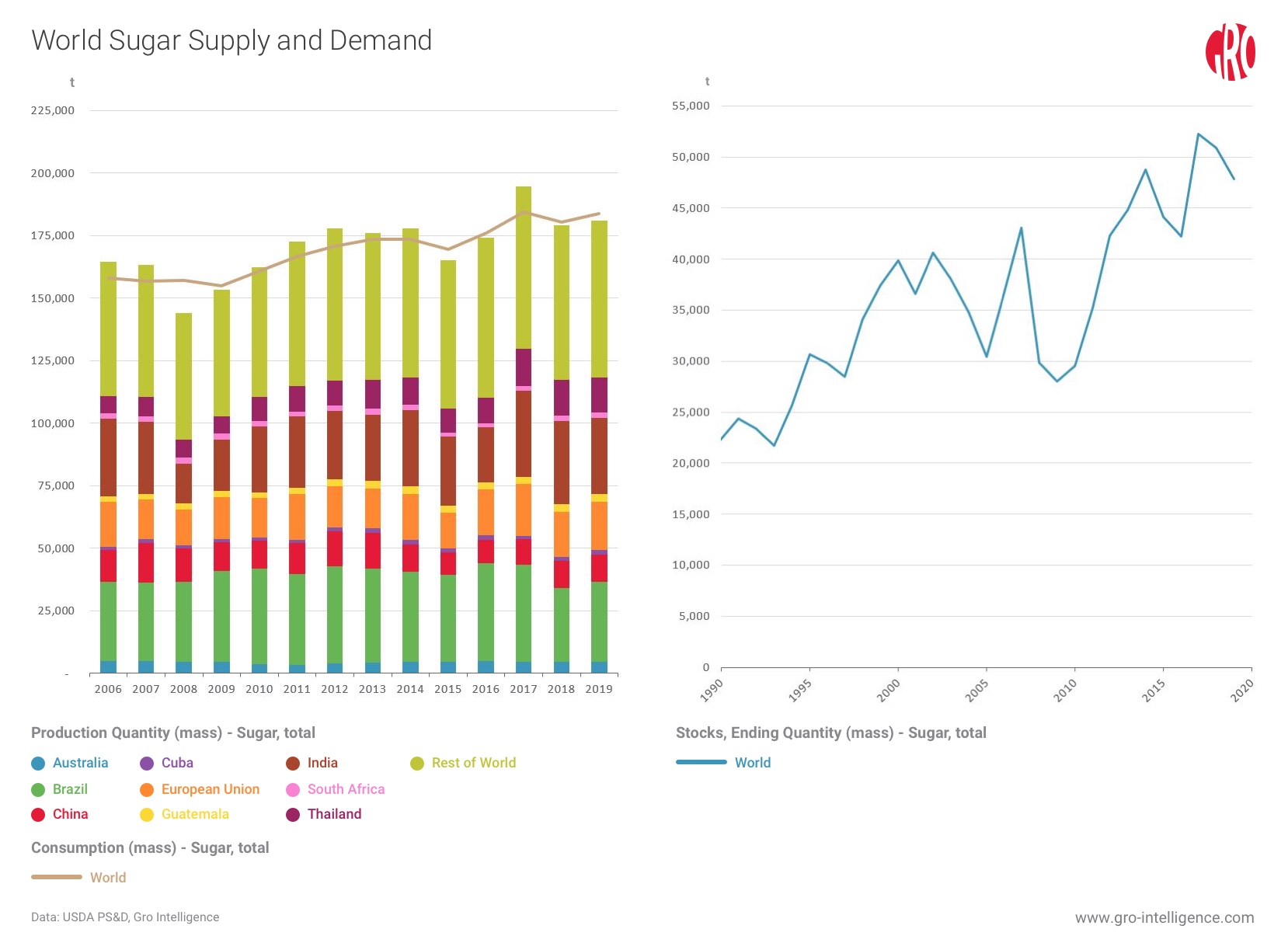 The charts above show historical production, demand, and stockpiles of sugar across the globe. On the left, USDA estimates of world production are shown by country (stacked bars) and are compared to world consumption (tan line). 2017’s global surplus can be seen as production rose 10 million tonnes above demand. On the right are the USDA’s annual stockpile estimates. In the current 2018/19 marketing year, the USDA projects a small decline in stocks while the ISO expects a nearly 2 million-tonne increase. For 2019/20 a 3 million-tonne deficit is projected by both the ISO and the USDA.

In 2017/18 Indian sugar production jumped an astonishing 55% to 34 million tonnes as the adoption of higher-yielding cane varieties surged. A year later, India surprised the world sugar market again by maintaining strong production at 33 million tonnes. To support its domestic sugar prices, India has provided subsidies to encourage sugar exports and will increase sugar stockpiling. Now, it looks like a correction is coming.

Poor rain levels last fall in India limited the amount of sugarcane sown in the country. Unlike Brazil, which harvests six or more sugarcane ratoons, India plants its sugarcane every couple of years. This means the area devoted to sugarcane can fluctuate on an annual basis depending on weather conditions or shifts in crop profitability. It also means that extended dry conditions can have an outsize impact by affecting both planted area and yield.

The Indian Sugar Mills Association (ISMA) in early July estimated a 10% year-over-year decline in Indian cane area in 2019/20, with reductions ranging as high as 30% in Maharashtra state. Those estimates, which were based on satellite imagery, led ISMA to a preliminary forecast for sugar production of 28.2 million tonnes for next season, down nearly 15% from a year earlier. ISMA said its estimate is based on “normal rainfall and other optimum conditions” and assumes good yields.

Now, even that expected decline looks to be overly optimistic. Monsoonal rains that India relies on heavily have been disappointing so far this season. While Uttar Pradesh, the largest sugar-producing state, is less susceptible to monsoonal rain variability, sugarcane in Maharashtra is highly correlated to accumulated rainfall in the period from June to mid-September. Rainfall in Maharashtra has picked up over the past week, but accumulated rainfall since June 1 is at its lowest level since 2015, when sugarcane production in the state fell 24%.

Adding the impact of poor rains to the acreage declines suggests India’s production cut at the national level could be closer to 20% in 2019/20.

Current evapotranspiration and sugarcane-production area in India are shown above. On the left, Indian Department of Agriculture data shows the concentration of sugarcane plantings across the country at the district level. This can be used to discern relevant areas in the evapotranspiration map on the right. Evapotranspiration provides a measure of the amount of water available to crops. Click on the image to go to an interactive map on the Gro web app.

Brazil is the world’s biggest sugarcane producer, but a big biofuel industry gives processors the option to turn excess sugar into ethanol. The strong uptick in global sugar supplies pushed the value of sugar below the so-called “ethanol parity” level in Brazil and it has become more profitable for processors to divert their cane to producing ethanol over sugar.

How far they could shift to ethanol was widely debated. In anticipation of the 2018 harvest season, most analysts estimated that capacity constraints at processing facilities in Brazil’s main producing Center-South region limited to 55% the amount of sugarcane that could be diverted. By the end of the crushing season, however, 65% of the cane had been used to produce ethanol. The shift drove Brazil’s sugar production down 10 million tonnes in the local 2018/19 crop year, or 24%.

Despite the decline, world sugar production remained in surplus this past year because of strong crops in India and Thailand. In response to continued price weakness, Brazilian sugar producers have cut their export volumes and are holding their sugar supplies in storage to avoid locking in weak prices. In mid-July, the lineup of ships waiting to load sugar for export is at its lowest level for this time in years, according to shipping agency Williams.

This year, nearly four months into the Center-South crushing season, processors continue to send 65% of their sugarcane to ethanol, a rate expected to continue for the rest of the season. On top of this, in the first three and a half months of the new season, the amount of sugar recoverable from cane (total recoverable sucrose, or TRS) is running 4% below last year, and the amount of cane crushed is down 4%. It's still early, and some still expect more cane will be crushed this season than last by the time the season wraps up. Still, Brazil looks set to see production in line with last year’s subdued levels. (Read more about Gro's model predicting total recoverable sugar in Brazilian cane here.)

The countries that make up the European Union together are the world’s third-largest sugar producer. Unlike Brazil and India where sugar is extracted from sugarcane, the EU grows sugar beets as a row crop. The annual planting allows faster reaction to price influences, and early season estimates this year indicate that EU sugar beet planted area is down between 5% and 8%. Now, abnormally hot weather has been stressing the areas that were planted.

While a late-June heat wave likely had limited impact on Western Europe’s sugar beet crop, a second, even hotter event in late July has been damaging. Paris, near France’s largest sugar beet producing region of Picardie, hit its highest temperature on record. Soil-moisture levels in the region were at the high end of their 10-year range in mid-June, but have now fallen to the low end of the range. Heat waves in 2003 and 2015 pushed Picardie sugar beet yields 5% and 3% below trend, respectively.

The combined impact of a reduction in planted area and a decline in yield could cut EU sugar production by more than 2 million tonnes in 2019/20.

Crop area maps and soil moisture can help assess the potential risk the Western European heat waves have had on the region’s sugar beet crop. On the left, MapSPAM land cover data shows the areas in France and Germany where sugar beet cultivation is concentrated. On the right, historical soil moisture levels in the main French producing region of Picardie are stacked by time over the calendar year. This year’s levels are highlighted in bold (with markers). Before the first heat wave hit in June soil moisture levels were on the high end of the historical range. Now, as a second heat wave has crossed the region, soil moisture is at the low end of the range. Click on the image to go to an interactive map on the Gro web app.

Huge sugar crops in India and Thailand in 2017/18 shocked the market, sending global stocks soaring and prices tumbling. Then, those producers surprised the markets again by maintaining strong production this past year.

In 2019/20, though, worldwide supply is expected to shift to deficit. The combined impact of low sugar prices and adverse weather will trim production in India and Thailand, the world’s second- and third-largest producers, while production in Brazil, the world’s top producer, will remain constrained.

When the International Sugar Organization released its initial 2019/20 estimate for a deficit of 3 million tonnes in early June, India’s monsoon had barely begun and hot temperatures had not yet hit Europe’s largest sugar-beet-producing region. Those factors, striking in multiple parts of the world, indicate that a far larger production deficit is very much in the cards. That, in turn, could give a boost to depressed prices. 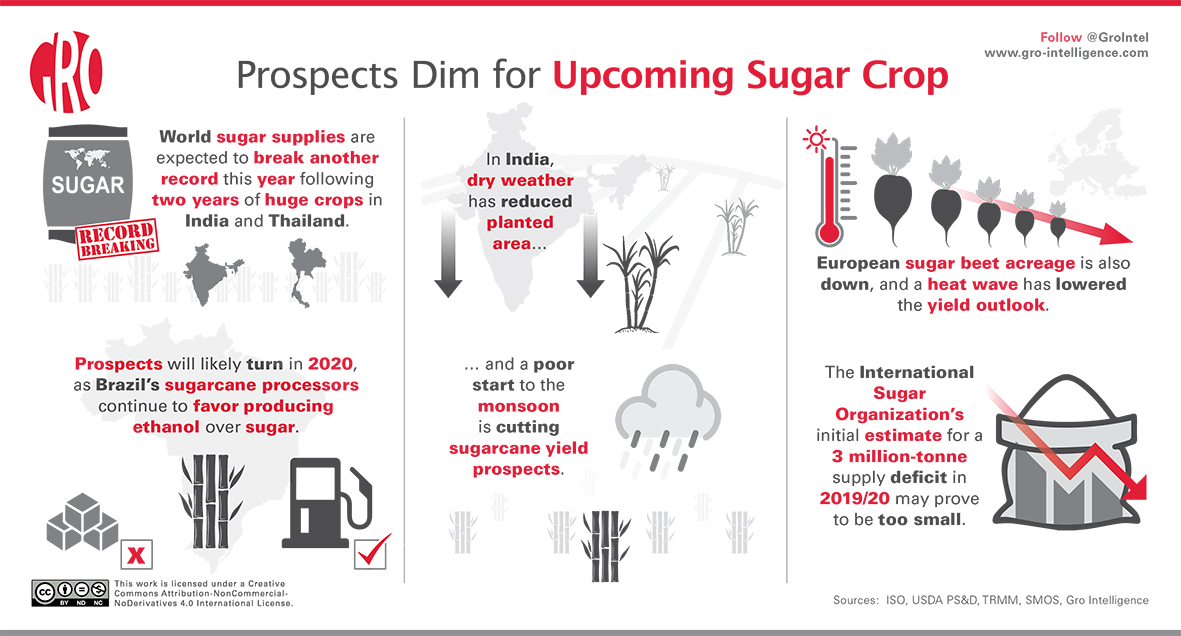