Europe is hardly known for consumer-focused, light manufacturing anymore. Other than the automobile and medical equipment industries, most export-focused industry left Europe for economies with lower labor costs decades, if not centuries, ago. Yet, there are still a few exceptions: notably, chocolate.

Europe has dominated the production, consumption, and exportation of chocolate since the advent of reliable statistics. Within the European Union (EU), just Germany, France, and the United Kingdom (UK) together consume more cocoa per year than the entire United States (US)—the next largest consumer. Chocolate production is so large within Europe that the continent accounts for 70 percent of global exports, a number which has gone nearly unchanged since the United Nations’ Food and Agriculture Organization (FAO) first started gathering data in 1961.

As chocolate consumption is heavily concentrated in Europe, world cocoa bean production and exportation is concentrated in Africa. Africa produces over two-thirds of global cocoa and an even higher proportion of global exports, the majority of which are sourced from a relatively small area of land spanning several countries in West Africa. The epicenter, Côte d'Ivoire, produces a third of the world’s cocoa alone. 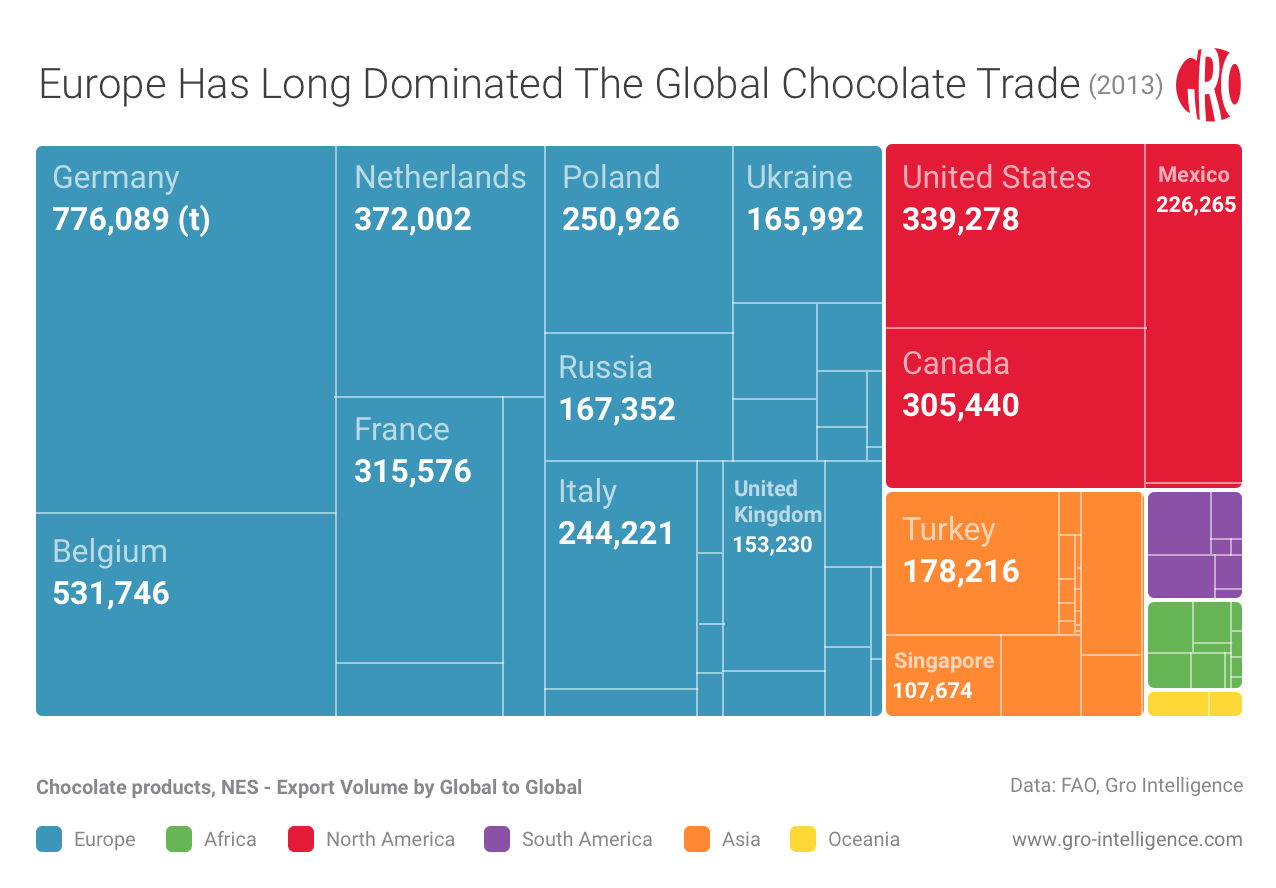 Maybe more than for any other globally-consumed commodity, chocolate production relies on a diffuse supply chain that spans multiple continents. In an age where centralization and vertical integration are increasingly vital to the survival of an industry, how then has the world’s chocolate supply chain remained such an exception? And how exactly might it be beginning to change?

The answer partly lies in the temperament of the crop itself, and cocoa is notoriously finicky. Native to the warm and humid Amazon basin, cocoa trees can only thrive within roughly ten latitudinal degrees of the Equator where consistent temperatures above 21 degrees centigrade and rainfall between 1,000 and 2,500 millimeters are present. Notably, drought and excessively hot or dry winds, such as the notorious Harmattan winds in West Africa, can quickly slash yields across wide areas. Moreover, cocoa still requires manual harvesting, and high labor costs in a given country can quickly make cultivation fiscally infeasible. 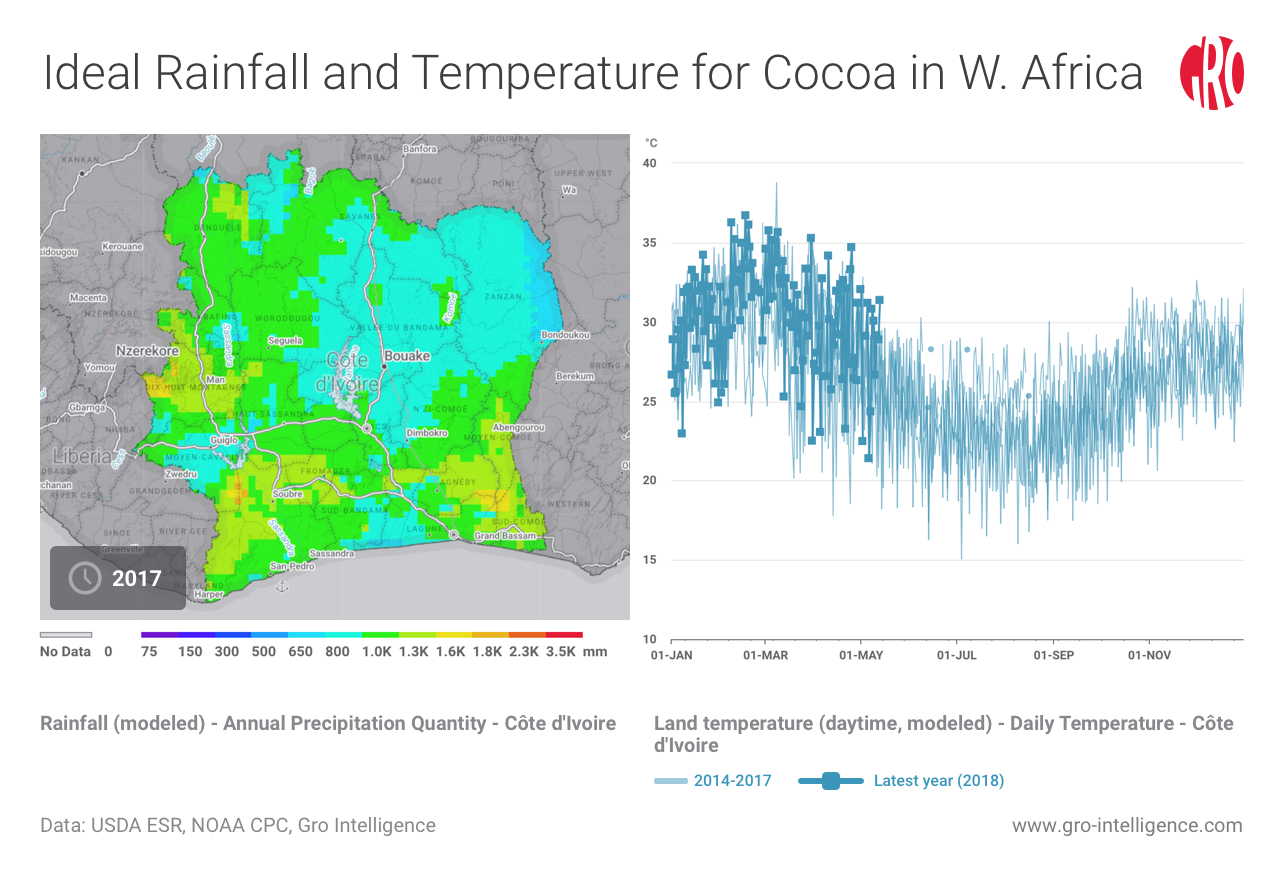 Historically, chocolate had been prepared as a drink. Chocolate drinks became popular in Europe shortly after the Columbian Exchange, but the commodity would only achieve true ubiquity during Europe's Industrial Revolution. Between 1815 and 1879, innovations associated with names such as Nestlé, Lindt, and Cadbury quickly transformed chocolate from a bitter, millenia-old drink into the sweet, cheap, and convenient chocolate bars that are pervasive today.

Europe has remained the epicenter of chocolate ever since, despite the nearest cocoa plantations being thousands of miles away. Six of the top ten cocoa-consuming countries in the world are all in Europe. In per capita terms, the world's ten largest cocoa-consuming countries are all in Europe. At the top of the list, Estonians consumed 6.8 kilograms of cocoa products per person in the 2015/16 marketing year. Chocolate is of significant economic value to Europe, too. 'Chocolate products' was Europe's second most valuable processed food export ($19.2 billion), behind only 'Prepared food, not elsewhere specified' ($27.6 billion), according to most recent data from the FAO. 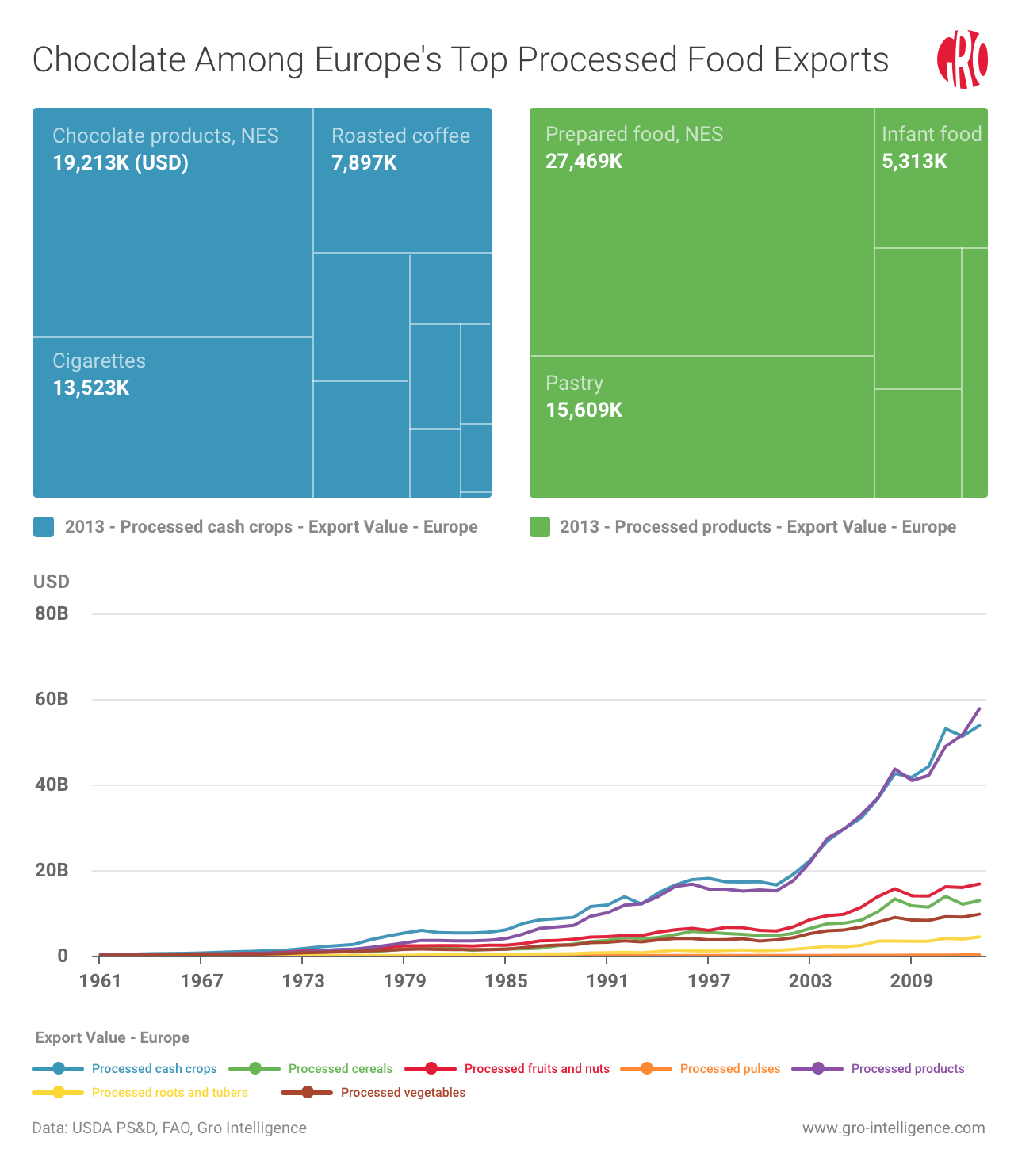 That said, there are other regions producing mass amounts of chocolate for export. North America is the world's second largest chocolate-exporting region, led by Canada and the US who exported 359.5 thousand and 323.1 thousand tonnes in 2016, respectively. Asia both produces its own cocoa beans (almost exclusively in Indonesia) and increasingly produces and exports its own chocolate, too.

Europe's position within the global chocolate market nevertheless remains strong. Competitive advantage within the industry is ultimately dictated by efficient production and economies of scale, which in turn encourage global market access and standardized product offerings. There were over 200 mergers and acquisitions within the chocolate industry between 1970 and 1990, and roughly 50 percent of the global market is supplied by just 17 companies—the majority of them European. Ferrero Group ($12 billion), Nestlé SA ($8.8 billion), Lindt & Sprüngli AG ($4.1 billion), and Pladis ($2.8 billion) each brought in over a billion US dollars in net sales in 2017 and are among the world's ten largest chocolate companies by that measure.

Lastly, there has been and continues to be significant debate between major polities about what exactly constitutes chocolate in the first place—such as how much vegetable fat can be included in chocolate—which has often been used to stifle foreign competition in the past.

Conditions in many parts of Southeast Asia are optimal for cocoa production. Historically, it has only been the region's unfamiliarity with the delicacy that has impeded large-scale growth of the sector. As globalization continues to transform the economies of the region, however, the chocolate landscape is quickly beginning to change.

Domestic chocolate demand generally reflects the size of a country's middle class, and Japan, being the first industrialized nation in East Asia, was the first in the region to truly embrace chocolate. Japanese companies Meiji Co Ltd and Ezaki Glico Co Ltd were the fourth and seventh largest chocolate companies in the world in 2017, bringing in $9.6 and $3.2 billion in net sales, respectively. Japan consumed 176.3 million tonnes of cocoa products in 2015/16—the seventh most of any country in the world—but a declining population and saturated market are not likely to be attractive targets for global chocolate producers. 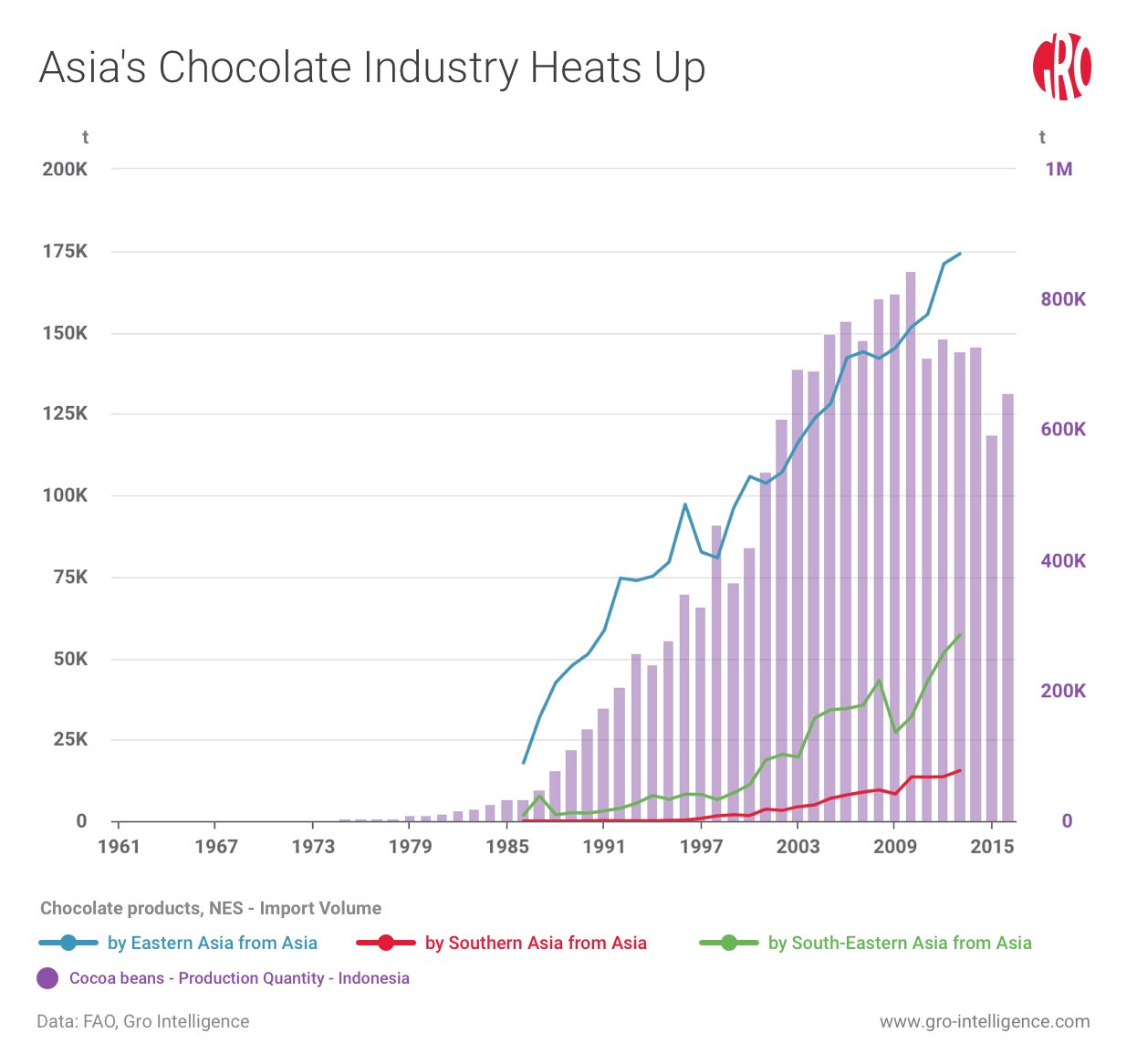 Rather, as the world's economy continues to shift toward other parts of East Asia and disposable incomes steadily rise throughout the region, several new countries have acquired the taste for chocolate. The industry's largest prospect, China, has been relatively slow to catch on so far. Of course, in China, “slow” means it is already the world's eleventh largest consumer of cocoa products, the total amount of which has more than doubled since just 2009/10.

Certain countries, such as Indonesia, even possess chocolate-appreciating cultures and the ability to produce and process cocoa domestically—a big threat to the current structure of the industry. In fact, Indonesia is by far the largest producer of cocoa beans outside of West Africa. While growing conditions are optimal among Indonesia's many tropical islands, cocoa faces strong competition and significant impediments to further expansion in that country. Cocoa beans are one of the most labor-intensive crops to cultivate, and a large pool of cheap labor is necessary to keep production costs low. Chocolate demand in China and other parts of East Asia continues to rise, but it might not be fast enough to outpace a significant increase in price as wages in Indonesia rise.

Africa's population is set to double by 2050, at which point the continent will be the only region still experiencing “substantial population growth.” Moreover, studies generally agree that Africa's middle class will only continue to grow, and some studies even suggest that by 2050, only one low income country will be left on the continent. Given chocolate's role as a reliably cheap luxury, there's a chance that the majority of cocoa beans produced in Africa each year will remain to be processed on the continent by 2050. While Africa's share of the globe's total chocolate exports has only increased by about 0.9% between 1961 and 2016, the region's total chocolate exports have doubled in volume during the same period. Several new brands of African-produced chocolate have been launched since then, and the region's growth potential is clearly far from exhausted. Land and labor in Indonesia and other Southeast Asian countries already faces stiff competition from other cash crops (such as palm oil plantations) and other manufacturing industries. Compared with Southeast Asia, West Africa possesses both in abundance. 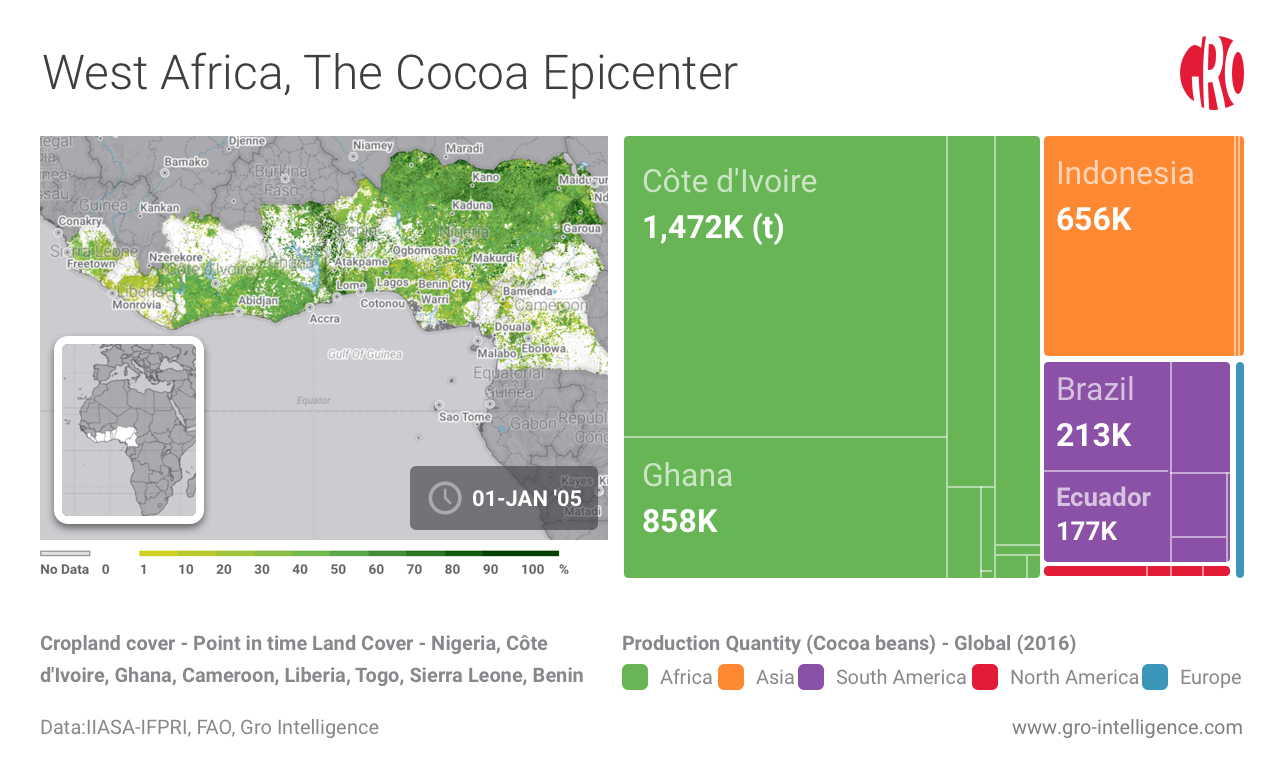 Europe has been responsible for countless innovations in chocolate production over the past few centuries, and most people would agree that the region has earned its chocolate crown. While the macroeconomic trends of European chocolate will remain strong for the immediate future, there have been signs that its dominance has already begun to erode slightly.

The world's largest consumer base, by total and per capita consumption, has helped insulate Europe and its chocolate industry from foreign competition. Intense consolidation among the continent's major producers has kept production costs low, too, allowing European companies to compete well with new competitors in emerging markets.

Effective marketing and consumer preference for Europe's historic chocolatiers will continue to buoy the industry as well. Brands and country-of-origin maintain a positive correlation, and European chocolatiers will surely benefit from their perceived quality, especially among their higher-end chocolates. US food giant Kraft Foods Inc. (now Mondelez International) purchased the nearly 200-year old British confectionery company Cadbury in 2010 partially with the intent of leveraging its reputation overseas. Lastly, a new generation of high-end craft chocolates is gaining favor among consumers, and European standards and experience makes its chocolatiers well-positioned to grab significant market share.

European chocolate companies' main concern in the near term will be East Asia. Indonesia is already the world's third largest producer of cocoa beans, and as the entire region's middle class continues to swell, local chocolate producers are well-positioned to both leverage domestic cocoa production and subsequently capture a significant share of the growing chocolate market. Similar to Mondelez, well-heeled Asian conglomerates are likely eyeing acquisitions of famous European brands, too.

In the longer term, Africa has the most growth potential. West African nations unsurprisingly prioritized the region's petroleum industry over cocoa during previous decades. The sustained collapse in global oil prices may therefore reignite interest among governments looking to diversify manufacturing by building out other raw material processing industries, such as cocoa. If African governments are serious about diversifying their economies and providing higher-paying manufacturing jobs to their people, chocolate production is an obvious industry to pursue. Especially in West Africa, where nearly all of the cocoa is produced and many of the continent's most populous and most rapidly developing economies are located, the perfect conditions exist for chocolate producers to take root.

This is not to say that Europe's reign over global chocolate is over. European chocolate companies and Gro subscribers alike can continue to use our unique mix of geospatial, price, and supply and demand data to stay ahead of any global shifts.