Webinar: A Quantitative Look at Farmer Protests in India

The last few months have seen Egyptian cotton cropping up in the news. Fraudulent agricultural products are becoming all too common these days, and Egyptian cotton, valued for its strong fibers and extra soft texture, is the latest victim. Major retailers, like Walmart and Bed Bath & Beyond, are putting their Egyptian cotton products under renewed scrutiny after allegations that these products were in fact made with lower quality cottons. Target, a popular US retailer, has even suspended all products sourced from its main supplier of Egyptian cotton products, Welspun.

In part due to misguided government intervention and elusive market share, rapidly declining supplies of authentic long-staple quality Egyptian cotton have made way for an influx of fraudulent varieties. In the 1960s and ‘70s, Egypt regularly produced over half a million tonnes of cotton annually; yet since reaching its peak in 1969, production has slid by an average of over 5 percent a year. This decline has only picked up steam in the last two decades, dropping by an average of over 10 percent a year to a record low of 38,102 tonnes in 2016. With few consistent political or marketing efforts being made to reverse the alarming trend, it may be fair to ask if the fate of Egyptian cotton has already been sealed. 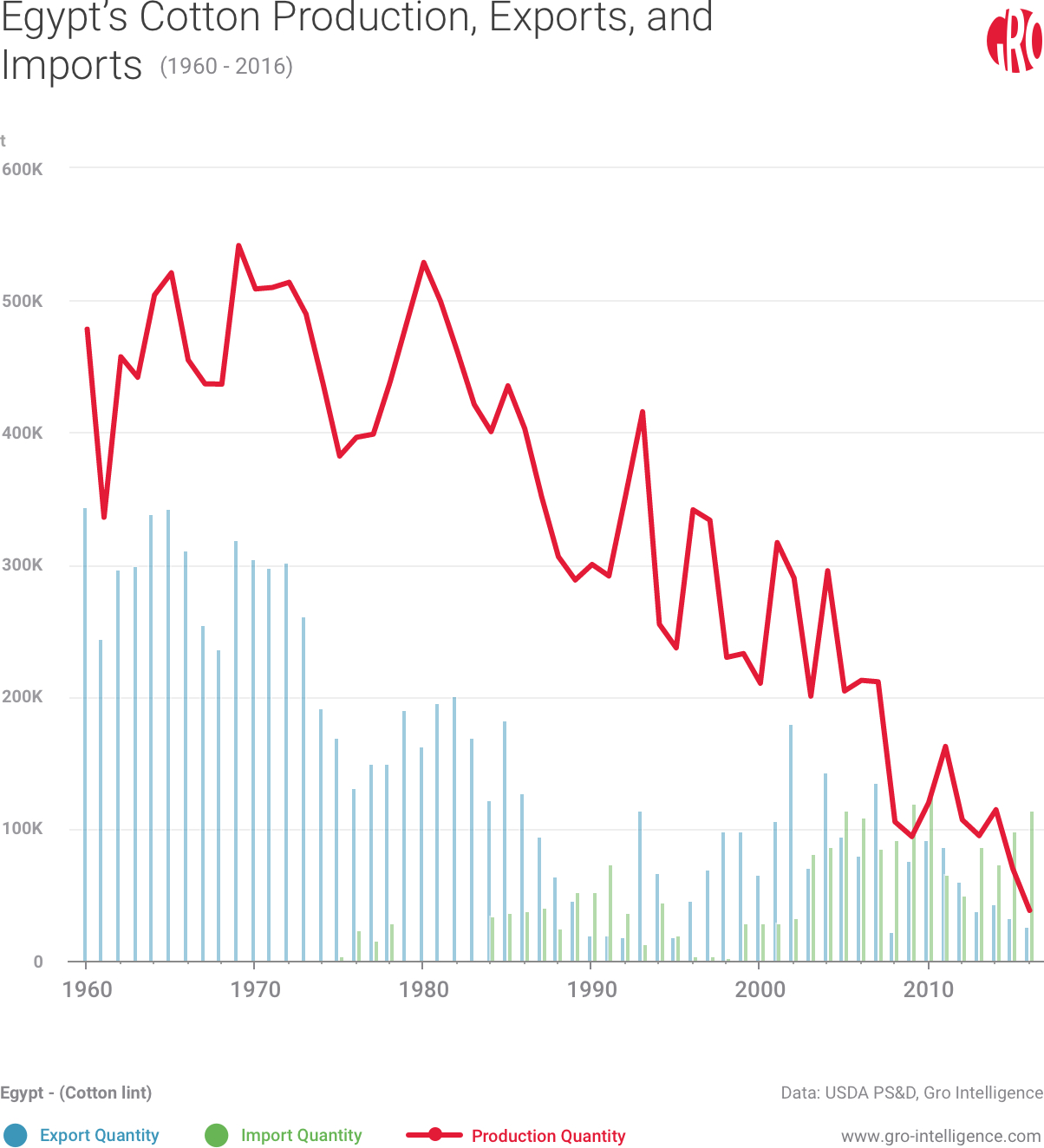 What Makes Egyptian Cotton so Popular?

Egyptian cotton first rose to prominence at the beginning of the 19th century under the reign of Muhammed Ali. A visiting Frenchman, L.A. Jumel, who was employed by the Egyptian ruler to assist in developing the nation’s textile industry, took particular notice of a variety of cotton. This variety produced longer and finer fibers than other popular varieties of the time, making it an instant hit around the world. By the early 1960s, Egyptian cotton accounted for roughly 10 percent of global exports, and throughout the ‘70s and ‘80s, Egypt regularly produced more than half a million tonnes of cotton a year.

Yet over the last several decades, Egyptian agriculture has struggled, and the cotton industry is no exception. Beginning in the 1970s, Egypt began liberalizing its agricultural policy and introducing more privatization. After phasing out programs which supported smallholder farmers, Egypt became a net importer of agricultural commodities for the first time in 1974.

Disruptive governmental policies continued to plague smallholder farmers. Under President Hosni Mubarak, in the 1990s, agricultural consolidation in Egypt became increasingly common, oftentimes forcibly. While investment in agriculture was robust, it was focused on high-value export crops such as fruits, vegetables, and flowers rather than traditional cotton and cereal crops, setting the stage for an import dependency that continues to this day. Whether intentional or not, these policies have tended to fuel resentment among small farmers who face a lopsided domestic economy. Various political parties in Egypt have proven themselves adept in fomenting these perceived grievances, be they real or not, into political opposition among the laboring classes.

Egypt’s recent political instability has precipitated an extended period of economic uncertainty and urban migration. Post-revolution, the country has largely failed to make agriculture a priority and to manage this sector effectively. Between 2011 and 2015, the country had 10 different agricultural ministers. Furthermore, their policies and subsidy programs remain volatile, changing from year to year, which further undermines incentives for farmers to remain in their fields.

At one point, Egypt supplied nearly one-tenth of the world’s cotton exports, but today, less than 0.5 percent of the world’s cotton is produced in Egypt. Of that cotton production, approximately 90 percent of it is of long or extra-long varieties. Nowadays, these specialty varieties of cotton are actually grown in a number of places outside of Egypt—such as Peru, India, Australia, and the US—and because Egyptian cotton is not a copyright term, these other suppliers are legally entitled to market it as such. In countries such as the US and Australia, for example, a hybrid variety of extra long staple (ELS) cotton, known as Pima cotton, has been cultivated with increasing popularity and is marketed with strict regulation as Supima cotton. Pima cotton is exclusively of the ELS variety, while quality Egyptian cotton encompasses both long staple and extra long staple. 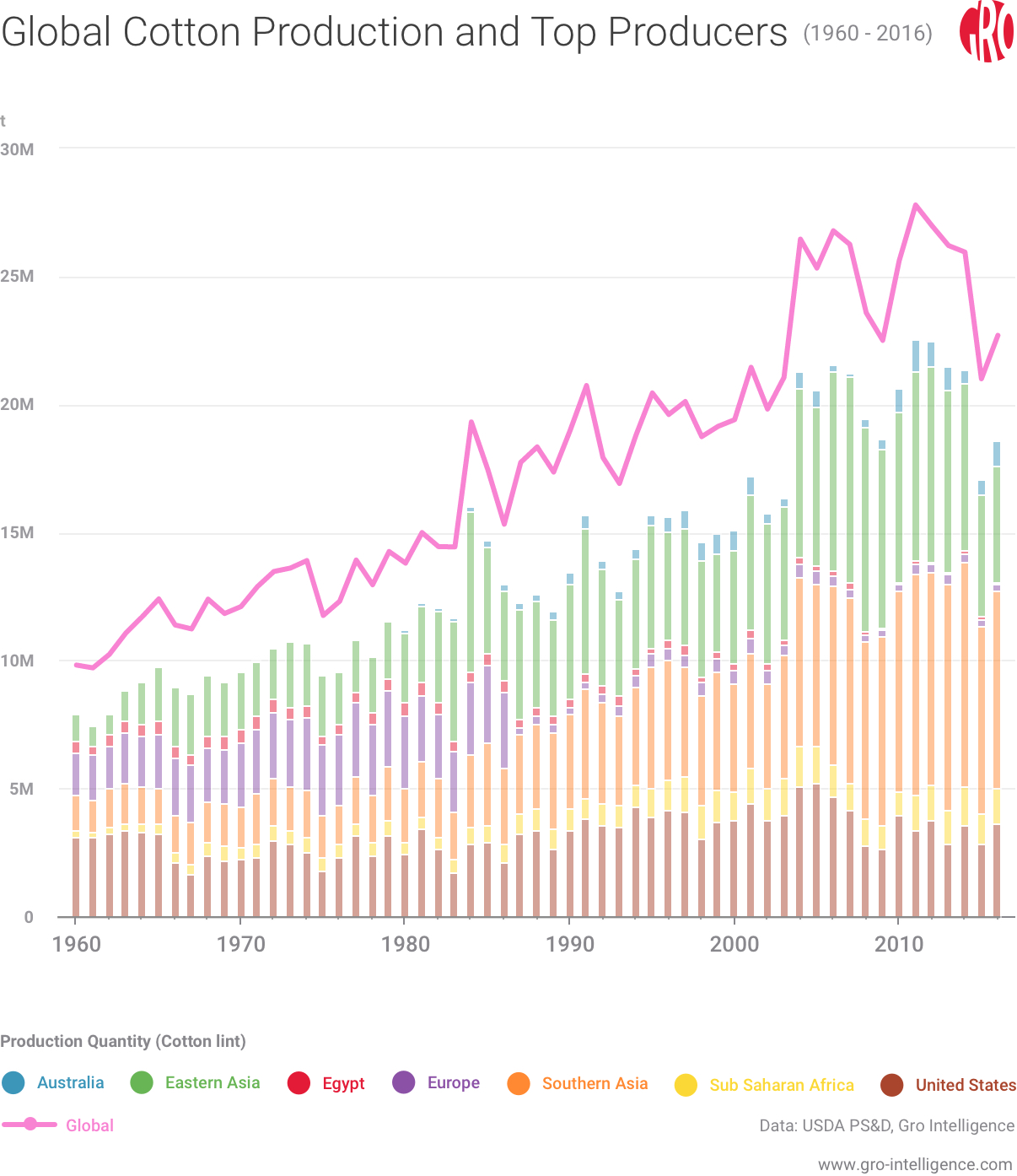 Delving into the Decline

As the fast-fashion industry began to blossom around the turn of the century, global textile producers started to favor cheaper, lower quality fibers. Egyptian cotton mills were no exception, shifting their focus to shorter cotton fibres that are easier to work with, better regulated, and cheaper. So for years, in an effort to buoy floundering demand and production, the Egyptian government subsidized artificially high prices for cotton through guaranteed purchases. Although higher prices helped Egyptian farmers in the short-term, the inconsistent implementation of these programs, paired with protectionist trade policies that restricted access to cheap cotton imports, undermined any chances the domestic cotton and textile markets had to compete on a global scale—especially with countries in southern Asia who had access to better textile machinery and cheaper inputs. 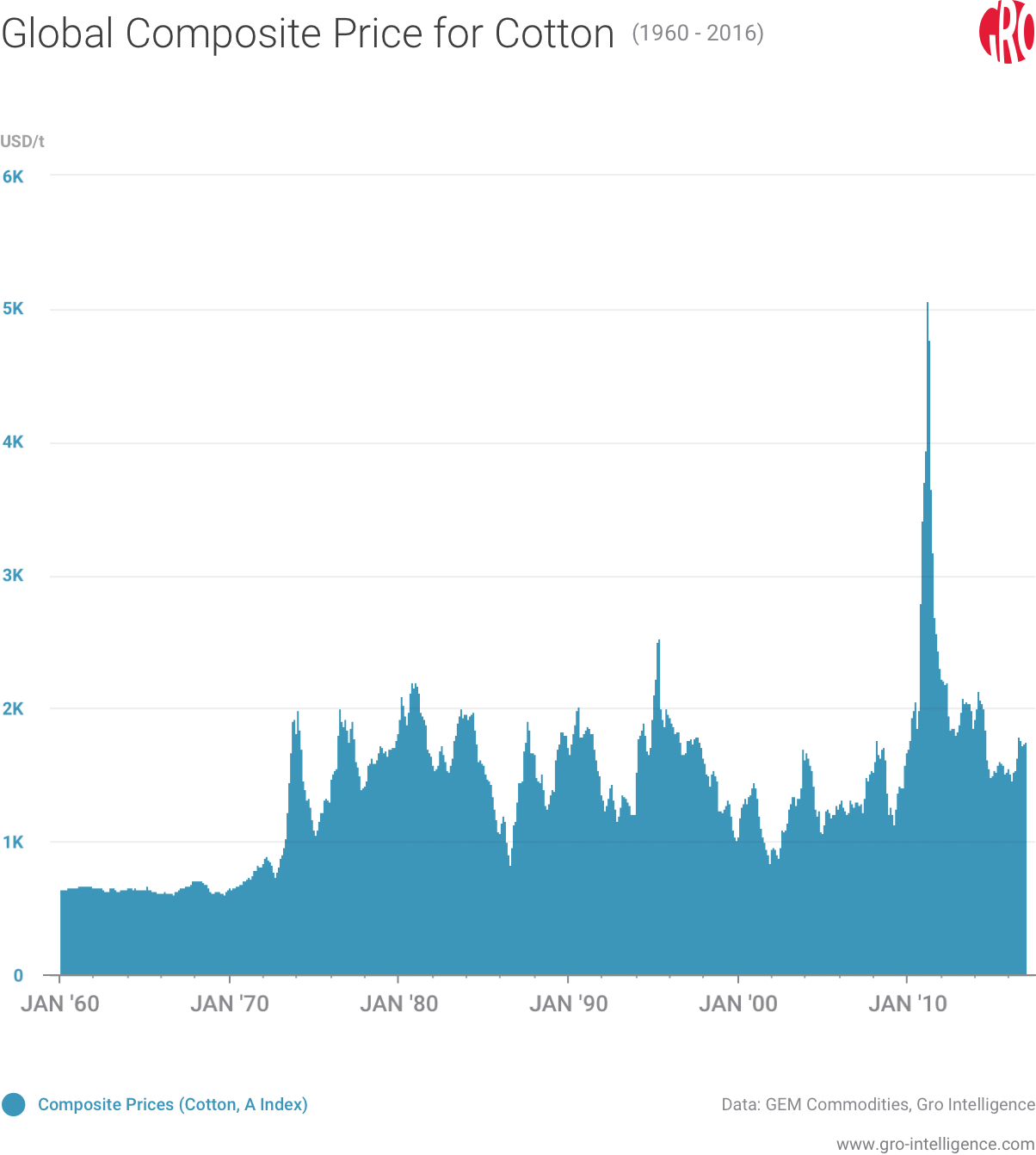 Furthermore, the Egyptian government has invested few resources into agricultural research and development, meaning improved seeds and specialized growing practices have gone underdeveloped for Egyptian cotton. As a result, yields have stagnated over the years, making the crop increasingly costly for farmers. From an ecological perspective, cotton is also an incredibly water intensive crop; climate change compounds this problem by creating uncertainty around achieving sustainable harvests. In light of these risks, many Egyptian farmers have since planted their fields with other, more profitable crops, such as sugar beets or rice and wheat, which grow efficiently in rotation. 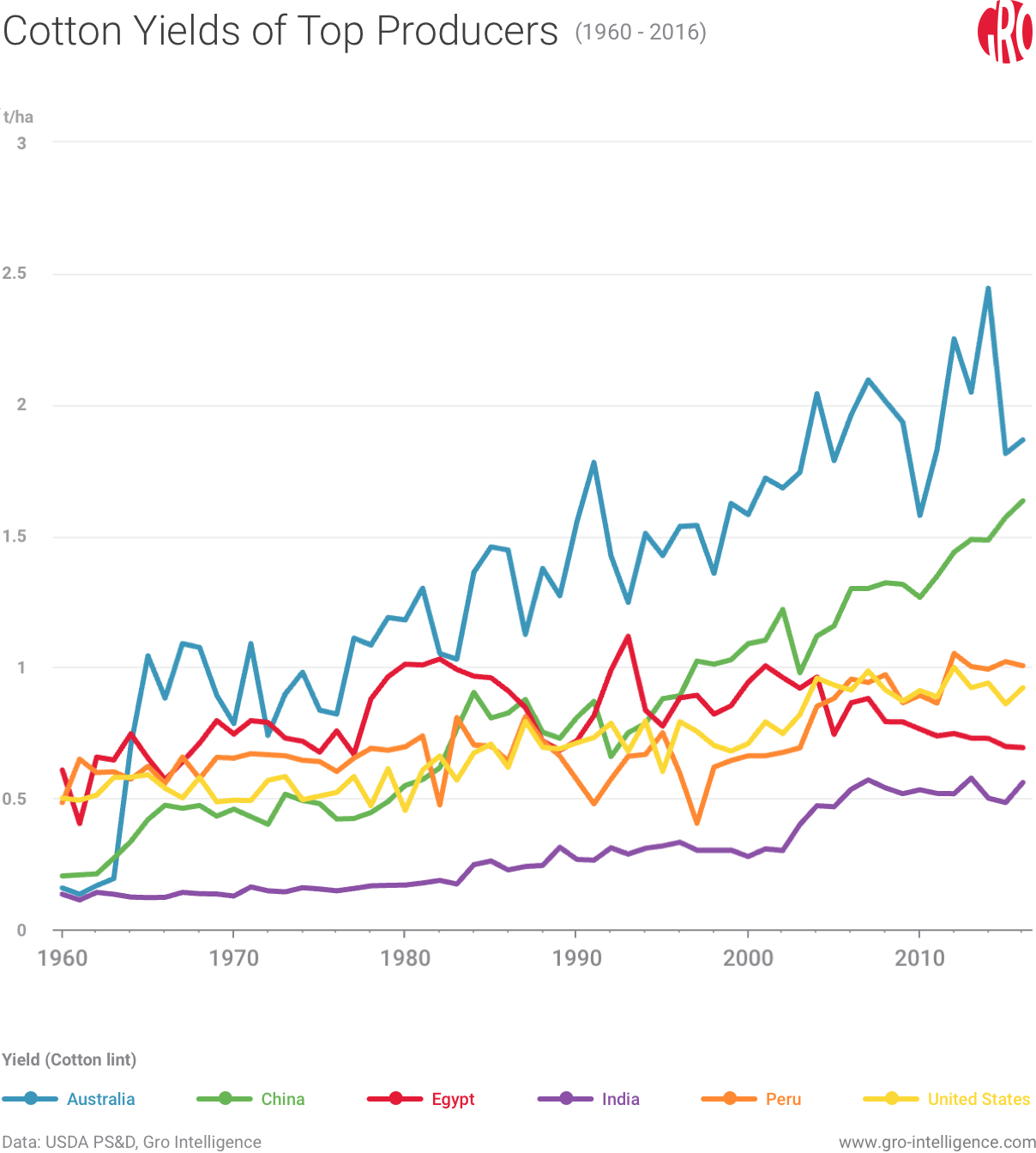 Poor quality control has also plagued the industry over the last half decade. A once heavily regulated industry, Egyptian cotton and its many varieties were planted in distinct regions and designated to specific ginning facilities to prevent cross-contamination. In order to simultaneously receive higher prices and cut costs, however, some farmers and middlemen have been blending their harvests with lower grades of cotton in order to deceive regulators and buyers. With genetically impure seeds being extracted during the ginning process, the quality and value of subsequent harvests have been noticeably diluted in some cases. Minimal government oversight has further exacerbated the issue, leaving seed distribution responsibilities to the poorly regulated private sector.

To make matters worse, the Egyptian government continues to vacillate on policy. Despite cancelling subsidies just the year before, authorities recently reinstated subsidies for the 2015/2016 market year. The reversal in decision represents a failure on behalf of the government to prepare Egypt’s remaining cotton farmers for the harsh realities of the free market; predominantly small-scale farmers, Egyptian cotton producers faced immense obstacles in securing contracts for their harvests—as the government strongly encouraged—among other issues.

When the government announced prices late in 2016—and made no firm commitment to purchase cotton through its Holding Company for Textile, Weaving and Spinning (HCTWS)—the uncertainty led farmers to further abandon cotton production. In other words, the future of Egyptian cotton looks bleak: Egypt’s Ministry of Agriculture and Land Reclamation (MALR) estimated a further 47% drop in area planted this year compared to last.

Fortunately for producers, the diminished value of the country’s currency means exports of Egyptian cotton remain fiscally attractive. Yet to increase yields and reverse the nearly fifty year trend of declining production, farmers will need help from government regulation in both optimizing seed distribution and researching improved seed varieties (the last time a new variety of cotton was introduced, was in 1996). Experts have even suggested that yields can be increased by 25 percent through the use of high-yield, weather-resistant varieties.

Although WTO agreements should, in theory, favor exports of raw cotton, investment into producing downstream products domestically, like high-quality textiles, would bring more of the value of the industry to the country directly. Furthermore, bringing these markets closer to producers will make them more accessible and provide farmers with the security of a sale. The government could also help farmers improve their market access and farm-gate price by encouraging the formation of local co-ops or other smallholder farmer networks.

Unfortunately, given the government's track record, consistent execution of these policies seems unlikely. However, in light of the publicity that the Welspun scandal has created, certified Egyptian cotton products are likely to receive a boost in popularity, which could attract private investors looking to reinvigorate the historic industry through independent funding. On the other hand, consumers may now be wary of any product branded Egyptian cotton and may instead opt for other, more regulated brands of long staple and extra long staple cotton, like Supima. Regardless, if the Egyptian cotton industry does not move quickly, countries that have already capitalized on its misfortune—such as Peru, the US, and Australia, all of which have also begun to grow long-staple varieties—will be more than happy to grab what’s left.

US Cotton Vies for Acreage Amid Tight Supplies