Competing interests in the European Union (EU)’s dairy market have led to unintended consequences beyond agricultural policy and corporate strategy. Europe has a long history of structuring rural development policy aimed at benefiting farmers. Farmers from major EU dairy producing member-states like Germany, France, the Netherlands, and the United Kingdom (UK) have been dealt a hard hand over the last few years. The repeal of milk quotas, the Russian ban on dairy imports, and rock-bottom oil prices have led to massive gluts and suppressed prices. In response to the plight of Europe’s dairy farmers, both industry and government are making moves by expanding into emerging markets while attempting to quell overproduction domestically.

The EU’s Common Agricultural Policy (CAP) is a series of measures aimed at helping farmers through income support and market interventions for sustainable rural development. The CAP program included dairy milk production quotas, a response to a price-crushing over supply. European skim milk powder (SMP) production was 2.64 million tonnes in 1982 when the milk quotas were implemented. After the repeal of the milk quotas in 2015, production of SMP increased to 1.96 million tonnes compared to just 1.78 million tonnes a year earlier.

As a counterweight to repealing the milk quotas, the EU imposed a system of buying dairy products from member-states at a fixed price in order to artificially reduce supply and to buoy dairy prices. However, in 2015 farmers were hit hard again by a Russian import ban on dairy products. 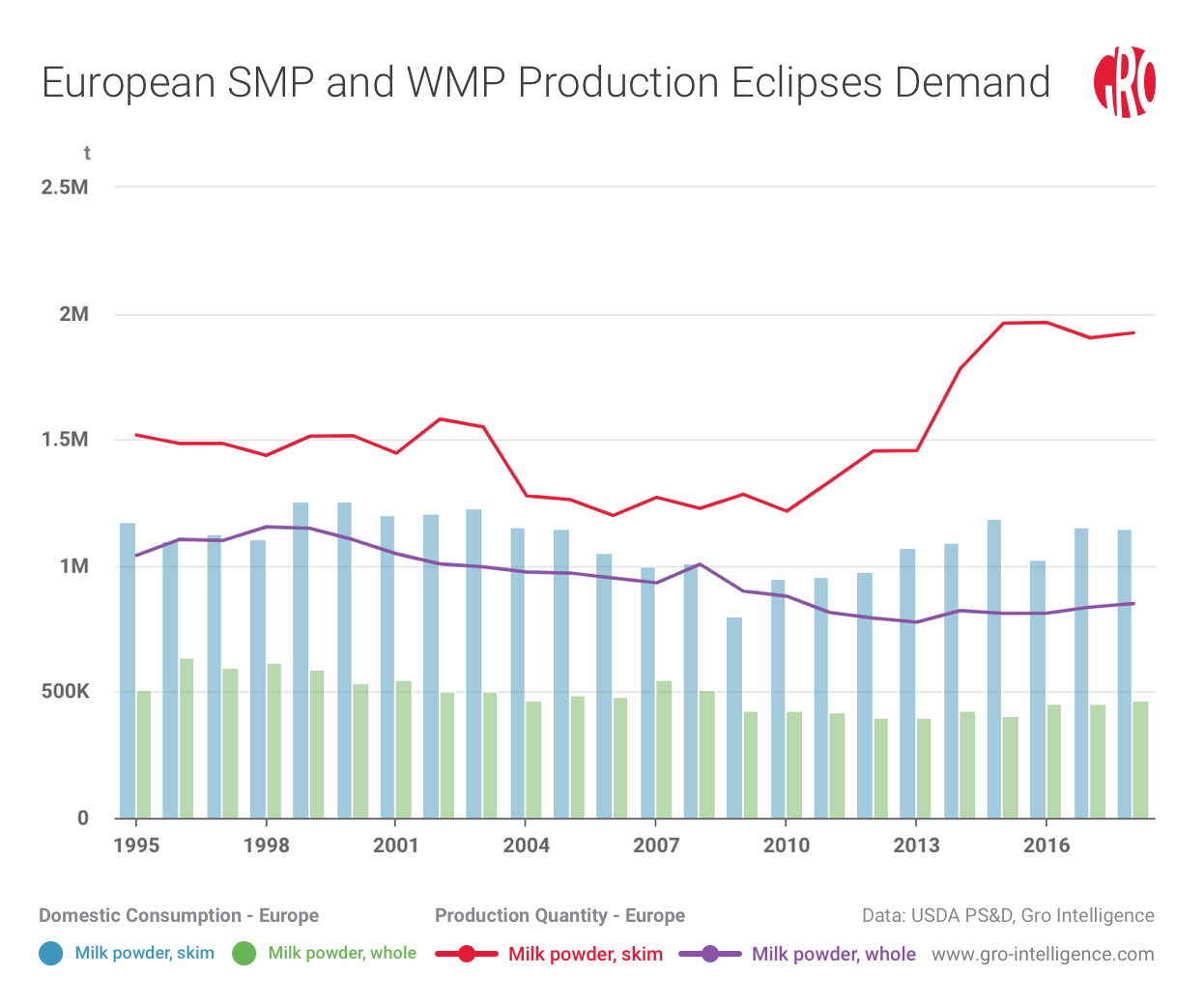 The EU spent 640 million euros on these SMP intervention stocks with the intent to sell into the global marketplace after prices had stabilized. But as of March 2018, the EU has sold back only 0.52 percent of SMP stocks. Despite the implementation of this strategy, production value of SMP dropped from 3,240 euros per tonne in January 2014 to 1,720 euros per tonne in 2016. And in 2017, intervention stocks ballooned to 375,000 tonnes from only 40,280 tonnes in 2015.

The Population Reference Bureau expects sub-Saharan Africa to increase its population by 50 percent by 2050. Concurrently incomes in this region are expected to rise. The annual per capita milk consumption in Africa is 37 liters compared to the global average of 104 liters. Clearly there’s great opportunity in the region. Algeria, for example, has the highest demand for SMP on the continent averaging 1.3 million tonnes annually yet domestic production of SMP pales in comparison. 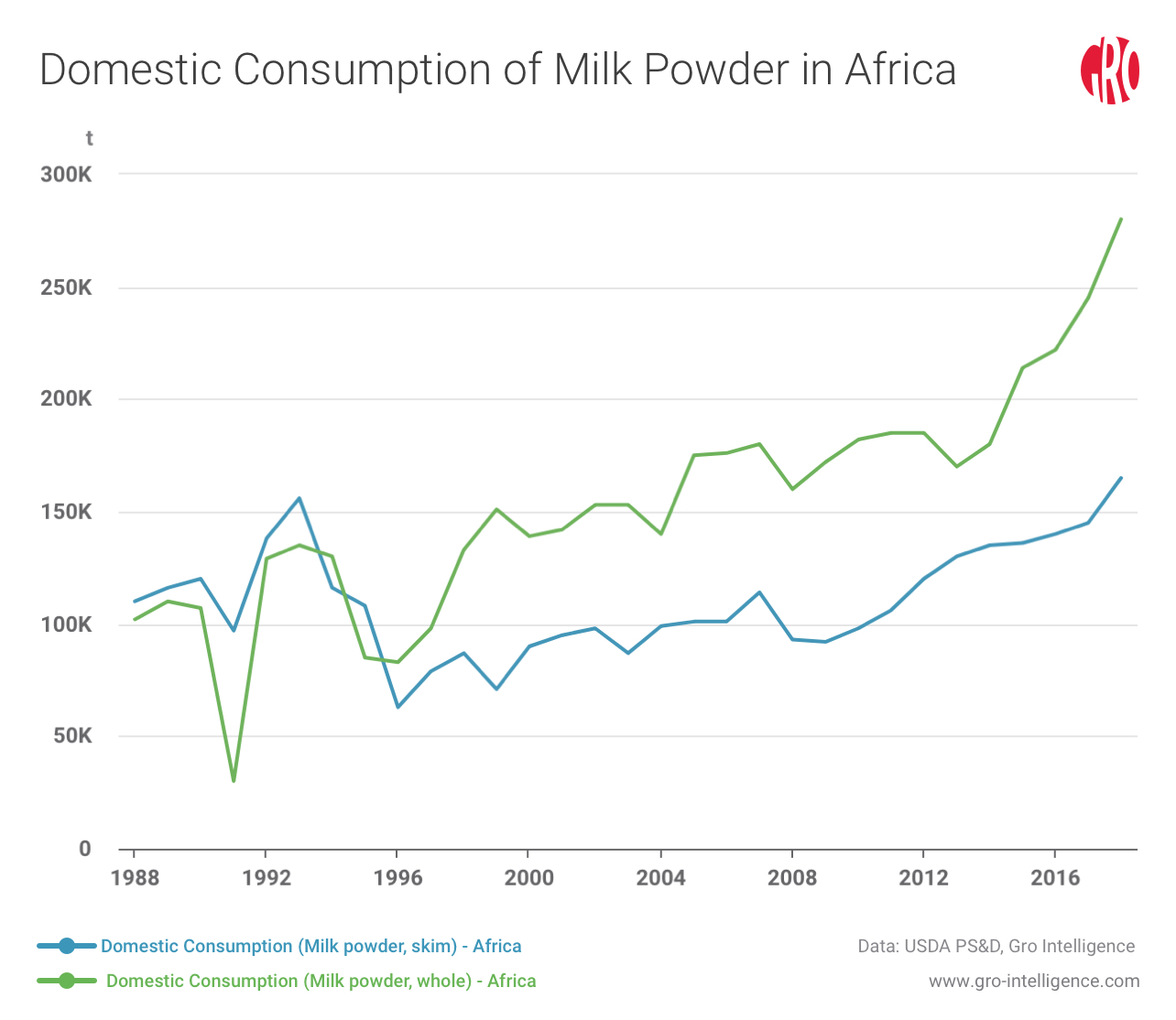 Danone, a global leader in dairy, was the first company to recognize Africa’s growth potential when they partnered with Moroccan company Centrale Laitière in 1953 to vastly expand their distribution network. In 2016, Danone became the majority stakeholder in West African based Fan Milk. The company also bought Halayeb, Egypt’s largest cheese producer.

Arla Foods, a major dairy co-operative, aims to increase revenues five-fold through 2020, an increase that would equal 460 million euros by that year. It has developed joint ventures in Senegal and Nigeria in hopes of expanding the company's distribution network. In 2014, Nestlé and FrieslandCampina attempted to get ahead of the looming end of milk quotas when they invested in SMP processing plants in Côte d'Ivoire and Ghana, respectively. All over the continent the same dynamic takes place. As Europe’s subsidized dairy industry gains a growing foothold in Africa’s market, farmers struggle to compete. 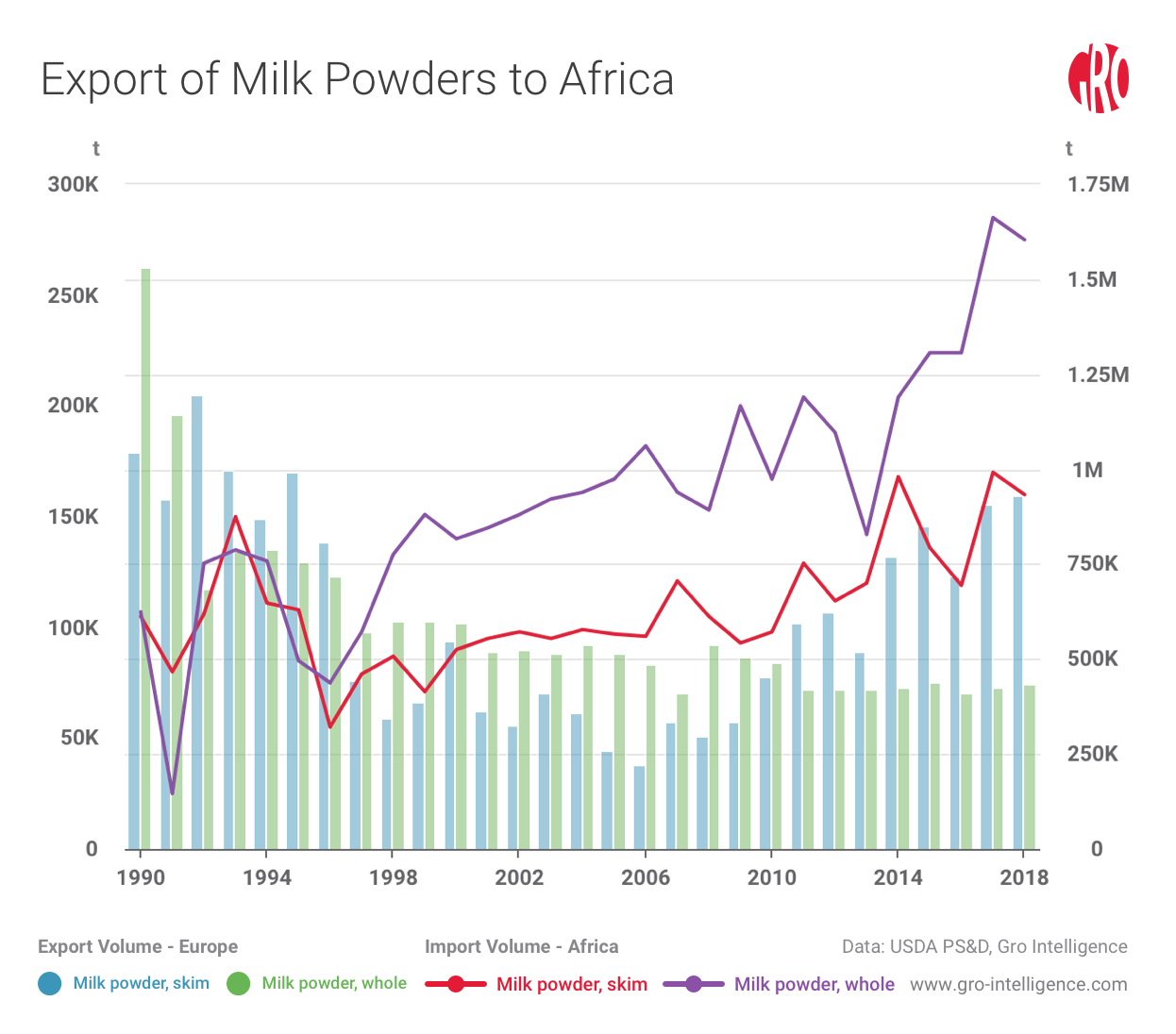 The expansion of Europe’s dairy agribusiness into Africa has had profound impacts on the local dairy sector, as Africa’s weak tariffs on dairy imports are not enough to stem the deluge of SMP and whole milk powder (WMP) into the continent.

This issue has been addressed by the European Commissioner for Agriculture, Phil Hogan, who has assembled a task force on rural policy in Africa charged with helping the continent’s governments strengthen agricultural policy and to urge European companies to invest more responsibly.

So far, African import tariffs have not been sufficient to stem the tide of the European dairy influx. In Nigeria the import tariffs have not been imposed consistently, and they have never exceeded 40 percent of the import value. Furthermore, revenues generated by the tariff were insignificant, amounting to just 0.1 percent of total government revenues in 1987. The Food and Agriculture Organization (FAO) has also pointed to western Africa’s external tax of five percent as weak compared with similar incentive structures in the EU.

African countries are stuck between prioritizing the protection of their dairy farmers or bolstering their food security. According to the FAO, milk and dairy products are rich in dietary carbohydrates, proteins, and fats while also providing a host of micronutrients necessary for optimal human performance. Protein availability in West Africa is relatively low at an average 52 grams per capita per day. In comparison, Germany’s protein availability is on average 141 grams per capita per day. Africans can boost their protein intake through the regular consumption of milk, and its consumers benefit from the influx of cheap supply. A study conducted by the FAO in 2017 found that in Senegal, the cost for locally produced milk is $1 per liter while the cost of foreign imports is just $0.50 per liter. 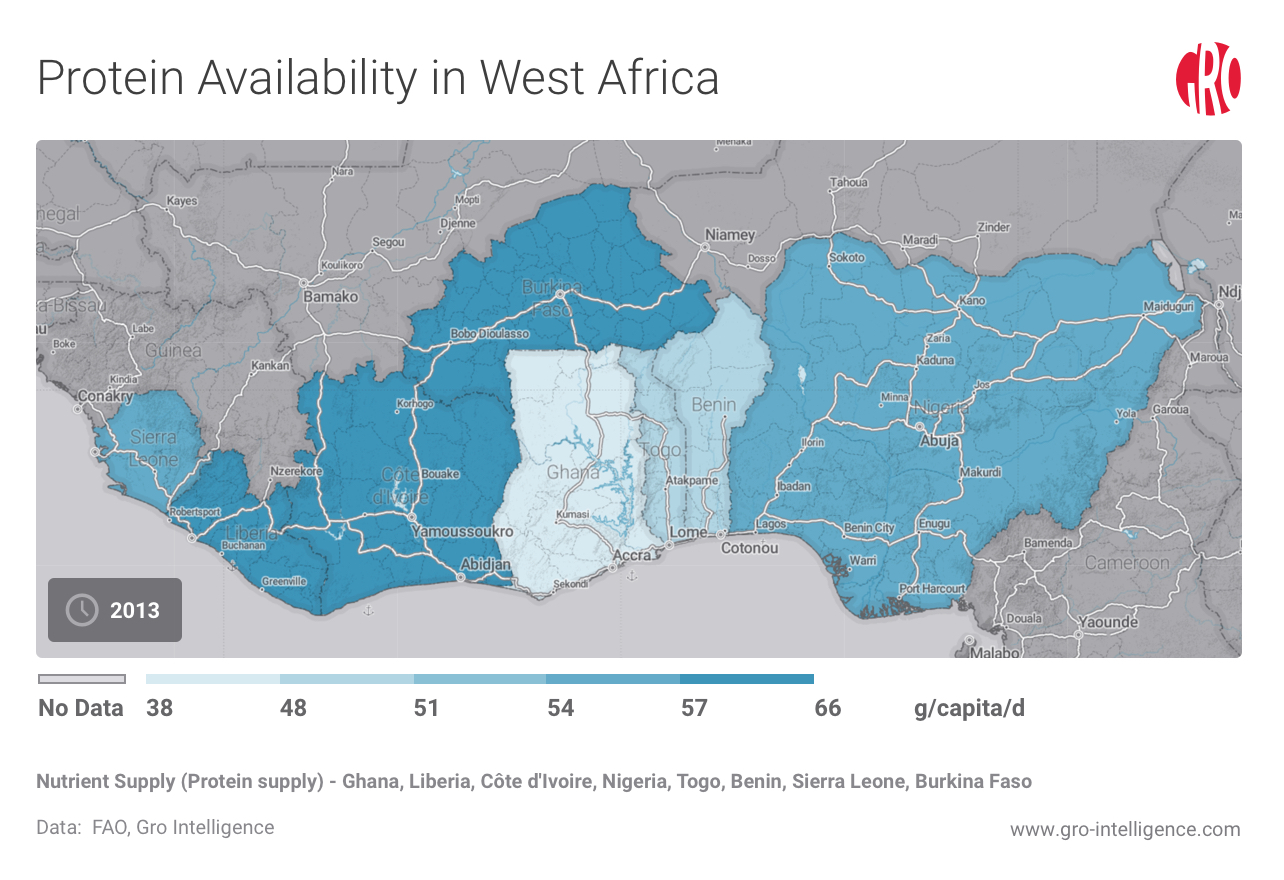 The 2015 removal of the production quotas on European milk products forced both government and industry to try to adapt to overproduction of dairy. The EU government’s approach is to continue buying in hopes of preventing further price downturns. The dairy industry took an entirely different approach by expanding into emerging markets.

It expanded into markets like China where supply falls vastly below demand; however, China’s agriculture is not the center of its economy as is the case for most African countries. While applying the same emerging market strategy to African countries seemed like a profitable tactic, it hurt dairy farmers struggling to compete with cheap high quality European volume. Adama Ibrahim Diallo, the head of Burkina Faso’s milk producers and mini-processors union, has sounded an even more dire alarm. He states farmers struggling to find work in the cities are increasingly being recruited by extremists, leading to national security issues.

The question remains, does the European dairy industry have a responsibility to protect local communities where it markets its products? Or rather, is the EU—not just the dairy industry—beholden to these smaller markets and obligated to regulate the pace of expansion to balance benefits for Europe’s producers with external repercussions? As the prospect of EU dairy expansion blooms in the minds of European dairy producers, industry and government should use data and analytics to guide responsible investment into African markets.