Apple production is down sharply in Europe this season, while the United States is weighed down by excess supply. This turn of events could provide opportunities for US apple exporters to expand to markets traditionally served by Europe.

Weather took a toll on Europe’s apples. Late spring frosts, drought, excessive heat, and hail damage were all cited by the USDA attaché in Berlin as drivers of a 24% year-over-year decline in European Union apple production. The downturn comes as EU farmers continue to grapple with the loss of a key export market in Russia due to tit-for-tat trade tariffs.

Poland, the EU’s largest apple producer, has been hardest hit this year with dry weather and two damaging frosts driving production down 43% from 2018 levels, according to USDA estimates. Germany, Hungary, and Romania have also taken large hits to their apple production this year. France and Spain, on the other hand, emerged seemingly unscathed and are expected to see year-over-year gains in apple output of 7% and 13%, respectively.

Pears and grapes in the EU were also impacted, with declines of 13% and 14%, respectively, in the bloc’s production of those fruits.

Meanwhile, the US is dealing with trade battles of its own. India and China have imposed tariffs of 70% and 60%, respectively, on American apples. India was the second largest export market for US apples in 2018, but in the first eight months of this year, exports are down by two-thirds. The resulting excess supply has driven prices lower for all US apple producers, not just those who traditionally export their fruit. In mid-September, retail prices for US golden delicious apples dropped to 87 cents per pound on average, their lowest level since the USDA’s AMS Retail series began in 2010. 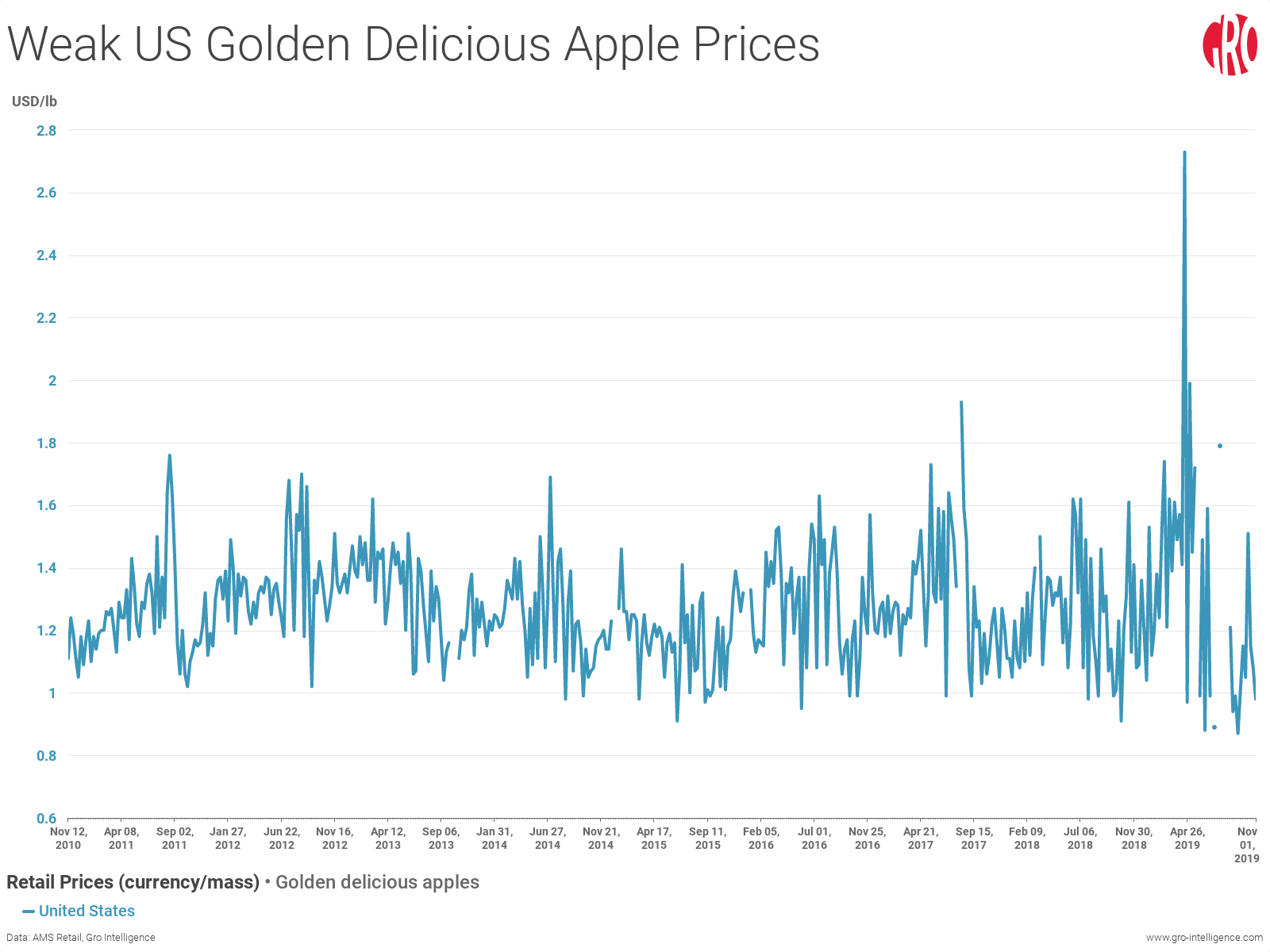 Trade tiffs have blocked US apple exports to India and China, increasing US domestic supplies of the fruit and hurting prices. This chart shows average weekly retail prices from USDA AMS for golden delicious apples. The price set a new low of 87 cents per pound in mid-September. Click on the image to go to an interactive display on the Gro Intelligence web app.

Global apple trade flows shift with the season as Northern and Southern Hemisphere countries each provide global supply for half of the year. The EU is the world’s largest apple exporter—over the past five years, the bloc has provided nearly a quarter of the apples demanded by global importers.

Asia is the largest importer of apples globally, and the Middle East and India are dominant buyers. In recent years, the US has provided only a small fraction of the apples shipped to Middle Eastern countries like Egypt and Saudi Arabia, compared with the EU. Now, the opportunity for expansion into those markets could boost the price US apple producers receive for their crop. 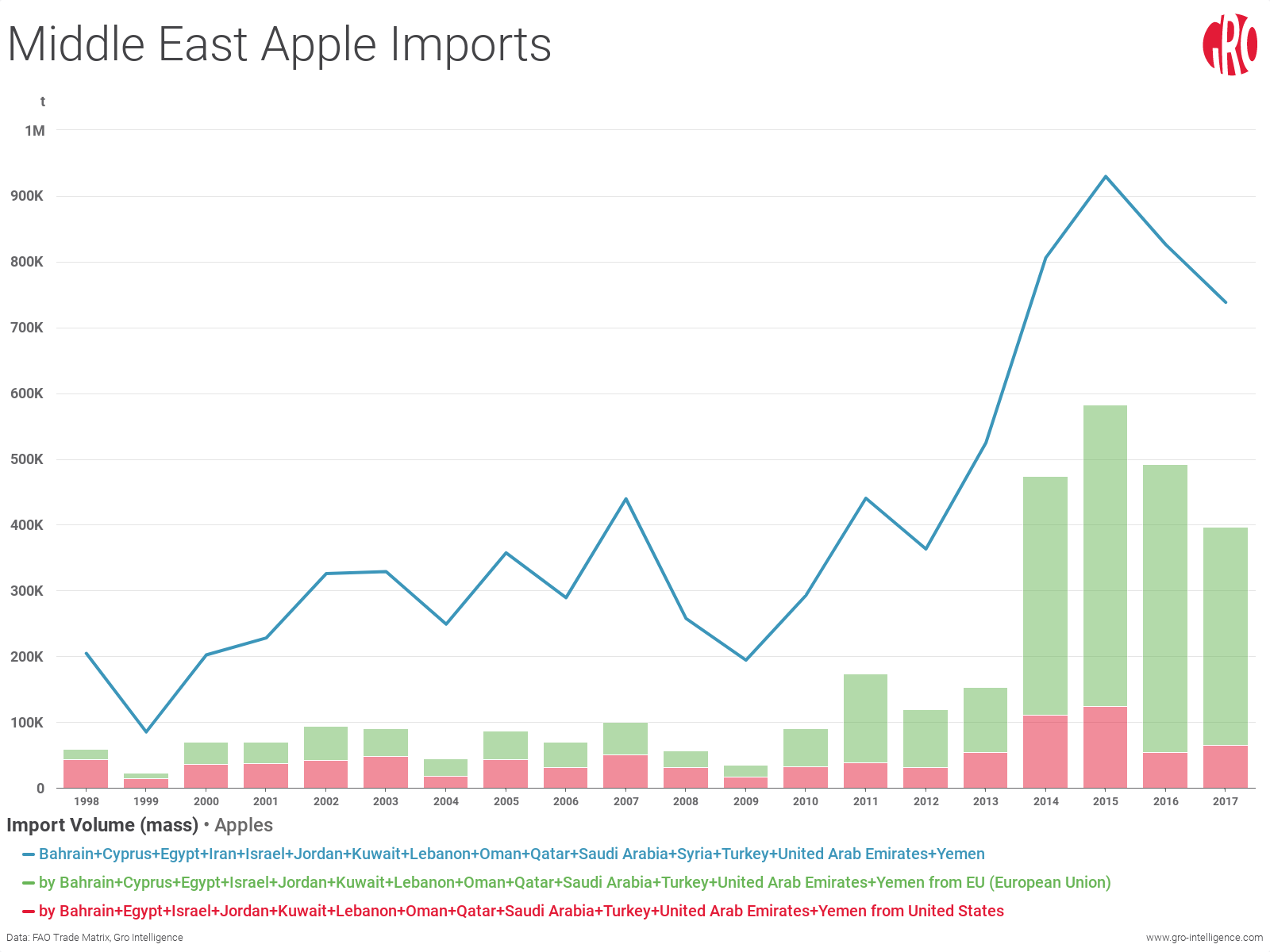 The EU has provided the majority of Middle Eastern countries' apples in recent years, but a sharp drop in European apple production this year could provide an opportunity for US apple producers to expand their reach to the region. This chart shows historical apple imports to the Middle East (blue line). The portions provided by the EU are shown as green bars and by US as red bars. Click on the image to go to an interactive display on the Gro Intelligence web app.
Link copied!
⌘ + C to copy
RELATED GRO ANALYSES