US planting weather is currently the principal focus for people across the agricultural value chain. The inability of Midwest farmers to plant millions of acres of corn due to unprecedented amounts of precipitation has rippled throughout the industry. Now, soybean acres are also under threat, as even that crop’s later planting deadlines loom. As farmers face complicated decisions about how and what to plant, a host of players from seed companies to financial traders are trying to predict what farmers will do.

The year didn’t start out this way. From a supply-and-demand balance sheet perspective, this season was looking very well supplied. Initial forecasts by the USDA for 2019/20 corn ending stocks were the highest since 1987, and soybean stocks were already at record levels due to the trade dispute with China. Now the unknown extent of so-called prevent-plant acreage, and the expected hit to yield from late planting in wet soil, have flipped the corn market on its head. The latest WASDE report from the USDA now forecasts corn ending stocks at a six-year low after a historic cut to forecast yield and reduction in planted area. The USDA’s Farm Service Agency (FSA) won’t release the first official estimates of prevented area until August. In the meantime, industry players have offered widely varying guesses for this crucial piece of data, with projections ranging from as low as 3 million acres to as high as 10 million acres.

Using machine learning and a combination of sources including satellite data, Gro Intelligence has developed a predictive model to forecast prevent-plant area for both corn and soybeans at the county level that can help guide clients to make better business decisions in real time. The model also can serve as a base for Gro clients to add their own proprietary data to further refine their estimates for their specific business segment. In this Insight, we describe the framework of Gro’s prevent-plant model, which is only available to Gro API clients. We also describe the extent of the challenge in the Corn Belt and what’s at stake for the agricultural industry. 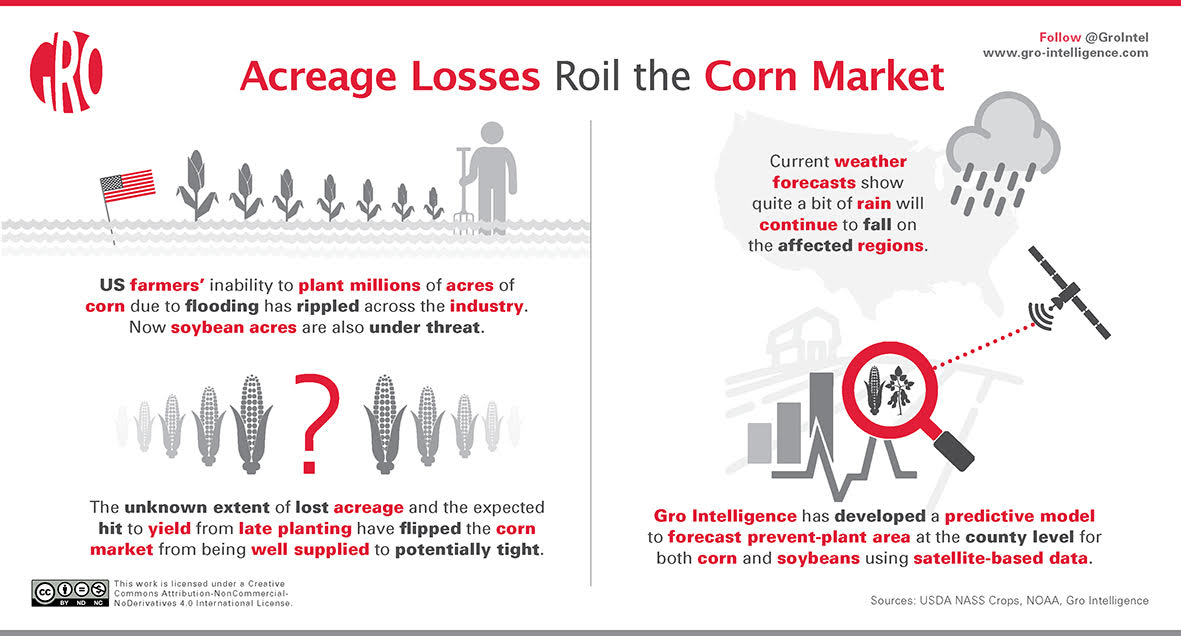 The US corn crop is currently at 92% of anticipated plantings; by comparison, the crop was fully planted in each of the last five years as of last week’s date, according to the USDA’s weekly crop progress report. Soybeans are 77% planted, versus a five-year average of 93% at this point in the season. The hardest hit areas for late planting are the eastern Corn Belt, through eastern Iowa, central Illinois, Indiana, and Ohio, and the region around the Missouri River in South Dakota, down through Nebraska, and into northern Missouri. These areas have experienced the wettest 12-month period through May, based on records going back to 1895. Record snowfall was followed by heavy rains, high river levels, and extensive flooding. (In a previous Insight article, we outlined the various options farmers face in trying to make the best financial decisions for their land.) 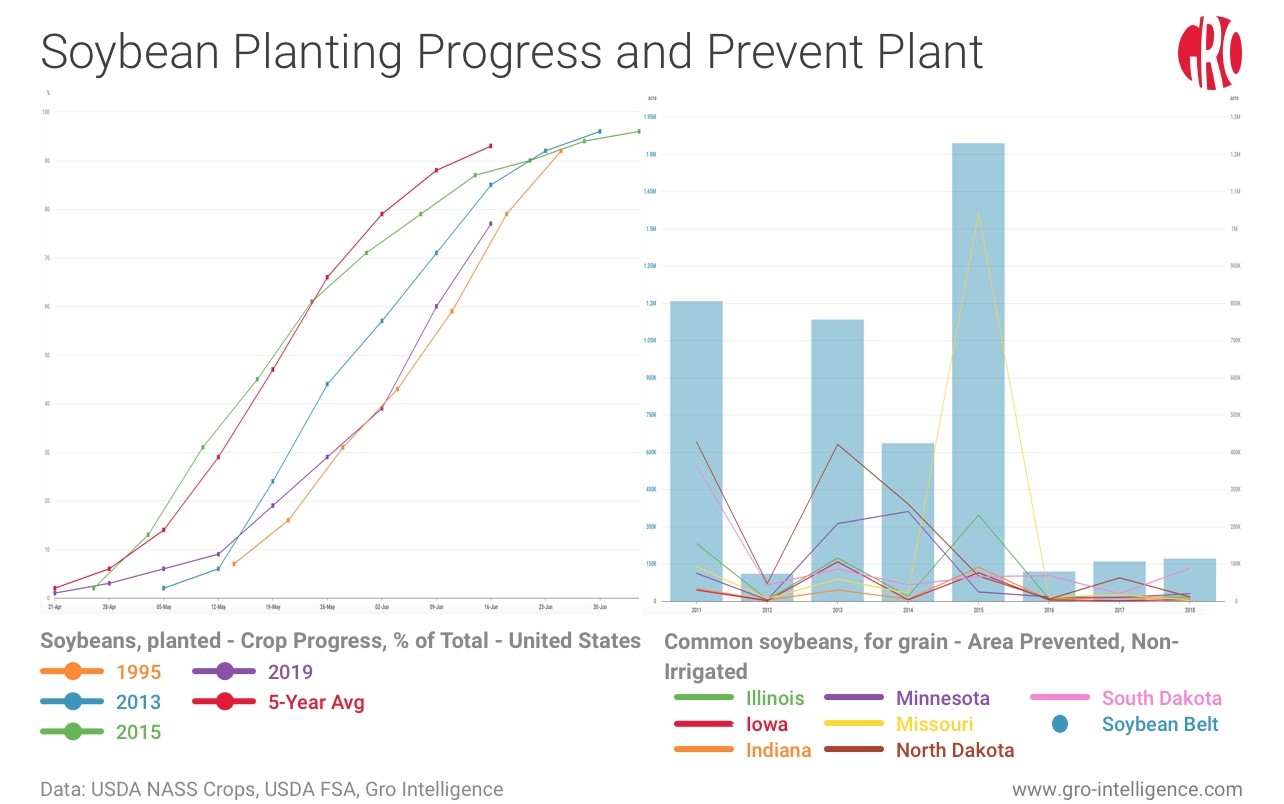 The chart on the left above shows planting progress for soybeans in excessively wet years. 2019 (purple line) is the slowest planting since 1995 (orange line). The five-year average planting rate is shown with the red line. The chart on the right shows prevent-plant acreage for soybeans in key states (colored lines) and the total across the soybean belt (blue bars). The past three years were very favorable with low levels of prevented area.

Final corn planting dates for insurance purposes have already passed, and studies show yield declines for corn planted after June 1. Soybean final planting dates run from June 15 to June 30, depending on the region. Current precipitation forecasts from NOAA show quite a bit of rain continuing to fall on the affected regions. Although corn acreage is already compromised, there had been a chance that soybean area could be stable or increase a bit from initial planting intentions, as some farmers considered switching to the faster-maturing soybeans. As time passes, however, a serious threat now also looms for soybeans, which could result in a massive combined acreage loss. 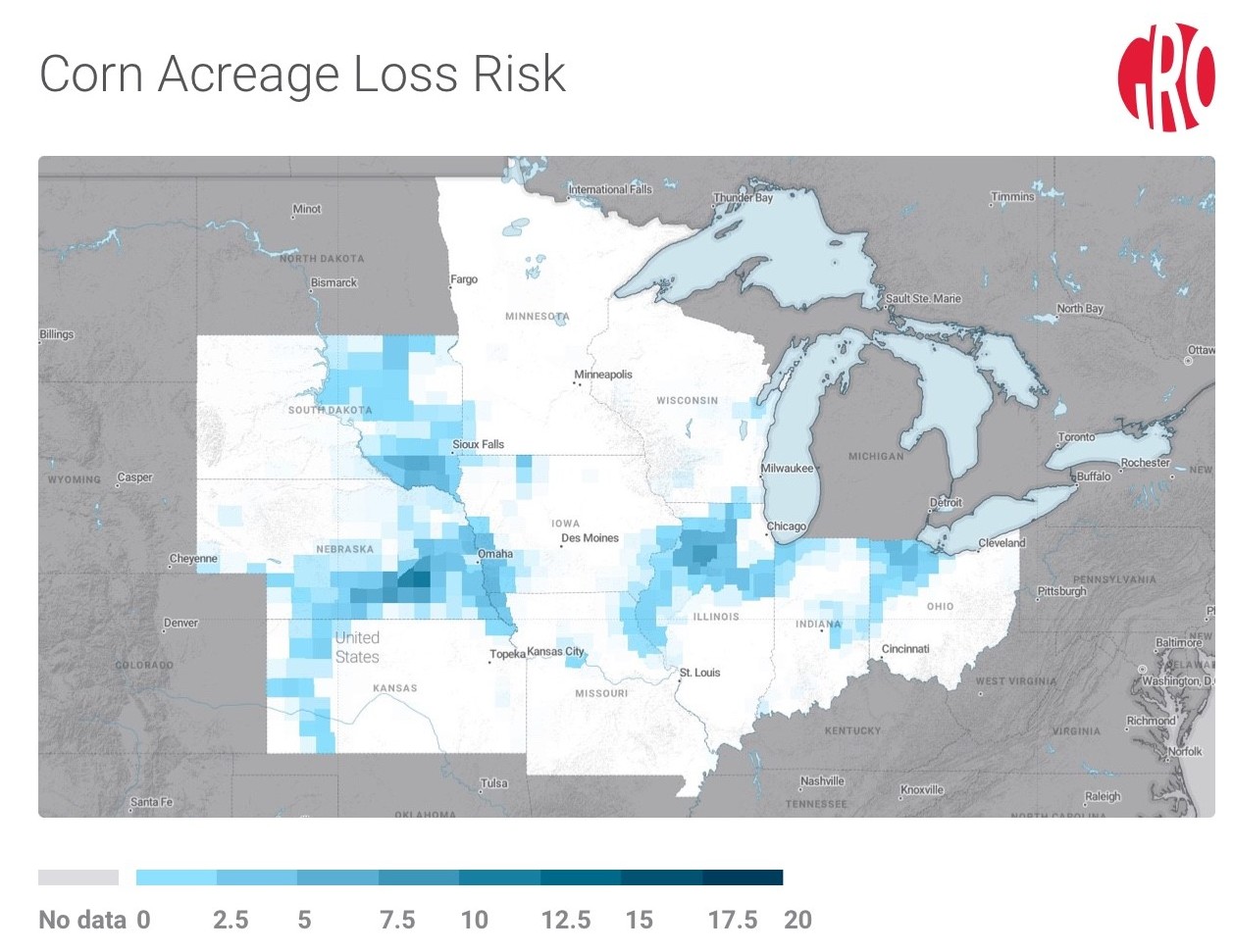 Values on the chart above represent the Gro risk score for prevent-plant corn acreage loss, based on factors such as how much precipitation has deviated from its 10-year average. The higher the score, the higher the risk. Areas with zero risk represent those with moderate levels of precipitation, or those where corn isn’t grown. This risk factor is one of the variables we include in our prevent-plant acreage prediction model.

The USDA made its first adjustment in recognition of the ongoing distress when it revised its forecasts for corn planted acreage and yield sharply lower in the latest WASDE report issued on June 11. This adjustment is model-based and related mostly to planting progress. The first government reported results for both prevent-plant area and yield will be released in early August.

The USDA also releases an acreage report on June 30, based on farmer surveys collected in early June, that is normally an important update to the planting-intentions report, which was issued in late March. However, given the extremely late planting, those farmer surveys will be incomplete or speculative, and a resurvey of several areas will likely be necessary. In 2015, the last year there was significant prevent-plant area, soybean farmers in Arkansas, Missouri, and Kansas were asked to resubmit planting surveys. As a result, soybean planted area was reduced by 0.8 million acres in the August 2015 WASDE. Planted acreage was reduced again by 1.1 million acres in the October WASDE after inclusion of data from FSA on planted and prevent-plant area. This season, the flood-affected area is far larger and uncertainty will beset the USDA’s forecast for planted area for both corn and soybeans for several months. 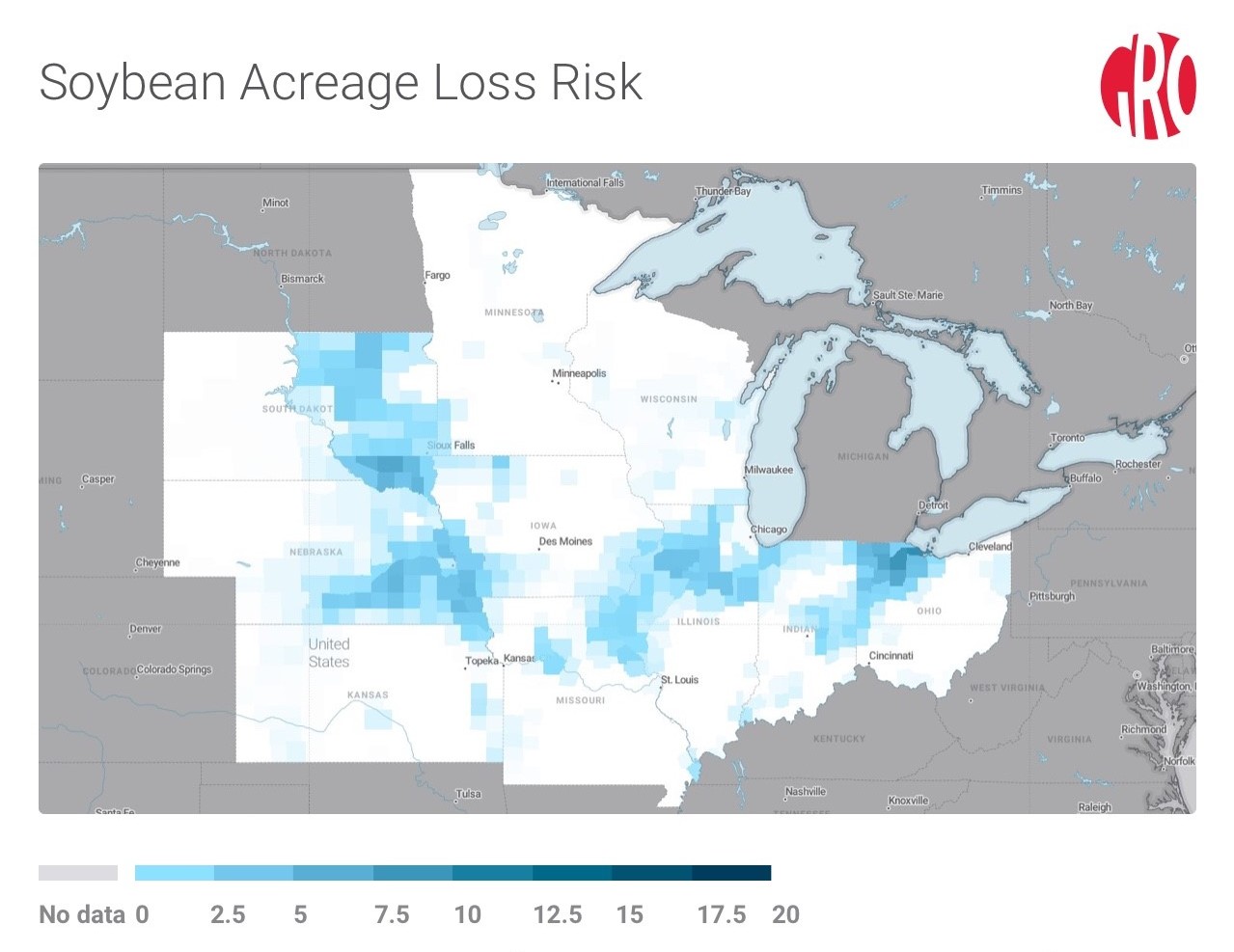 Similar to the chart for corn above, values on this chart represent the Gro risk score for soybean acreage loss due to prevent plant. The higher the score, the higher the risk. The most impacted counties with significant risk for soybean acreage loss are in two main areas: the eastern Corn Belt, through eastern Iowa, central Illinois, Indiana and Ohio, and the region around the Missouri River in South Dakota, down through Nebraska, and into northern Missouri.

Forecasting the magnitude of corn and soybean acreage lost to prevent plant would be valuable to many players in the agricultural industry. Gro approached the challenge using satellite-based, pixel-level data combined with other relevant factors described in the Python notebook in the Gro API. We then aggregated that data up to the county level across the Corn Belt, and incorporated state-level planting progress reports from the USDA. Forecasts for the current year’s prevented area were calculated for each county and then aggregated across the Corn Belt.

Gro continues to work to enhance its prevent-plant acreage model by adding new data sets that will allow the model to make predictions further into the future.

Gro API users can make additional, proprietary enhancements to suit their business needs. For example, nonweather-based data such as farmer cost and returns, or physical price data, can also be tested with the Gro model to enhance precision and decision-making at a local or regional level. Underlying data inputs to the model are updated weekly, providing Gro API clients with the most recent prevent-plant estimates. Clients also can make use of the environmental data in the model to identify acreage at risk in other countries where production might be affected.

Prevent-plant area affects every aspect of the agriculture industry, from farmers’ income and insurance coverage, to market prices and supplies. Ground truth reports from the USDA’s FSA and NASS are still months away, yet many industry decisions need to be made now. Gro’s model can be used to inform decisions or as a base to be modified for the needs of a specific business segment. All the underlying data for modeling prevent-plant acreage is available on Gro’s platform, and the full Python notebook and output are available through the Gro API.