American consumers can expect to pay more for their Thanksgiving turkey this year, as the industry finally draws down excess supplies that have kept prices low in recent years.

A Gro analysis of the turkey supply chain, from eggs to frozen stocks, points to an increase of 24% in producer prices to 66 cents a pound for November 2019, compared with 53 cents in the same month last year. Although retail prices are normally higher than producer prices, the two tend to mirror each other’s percentage changes. 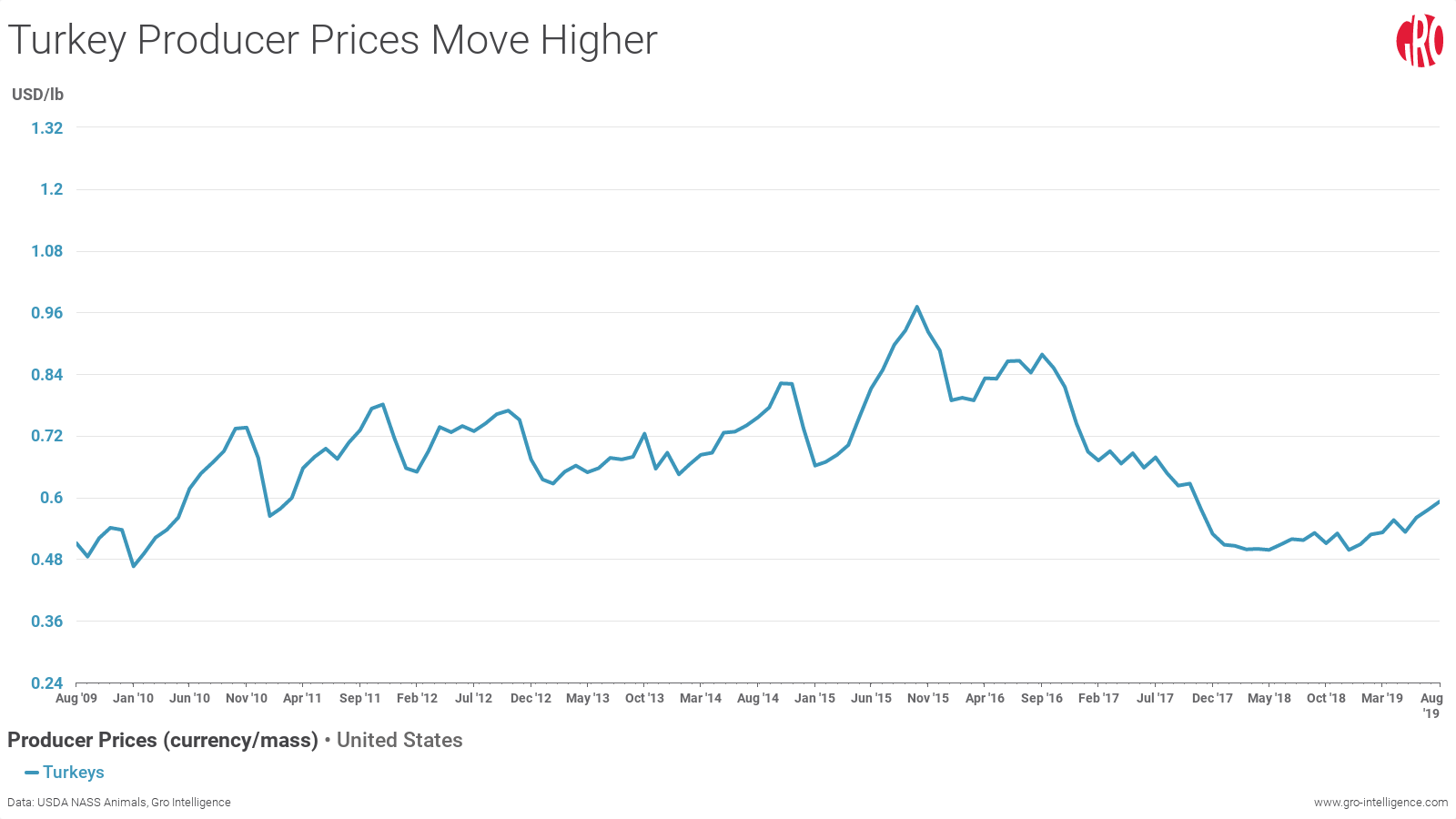 After two years of the lowest levels in a decade, producer turkey prices are beginning to turn around. A Gro analysis of upcoming supplies suggests the price recovery will continue. Click on the image to go to an interactive display on the Gro web app.

Grocers and restaurants that either have purchasing windows inside of one month or have delayed purchases during the steady rise in turkey prices this summer may find themselves pinched by the pre-holiday scramble. Businesses typically contract their Thanksgiving orders one to three months in advance from warehouses that have spent the year slowly building their turkey stockpiles. As shown in the chart at the bottom of this article, Thanksgiving dominates the turkey market; cold-storage stocks are reliably built then exhausted according to the holiday schedule. The final months ahead of Thanksgiving are when producers capture the premium associated with fresh turkey, which over the past 10 years has tended to fetch a 16% (17 cent-per-pound) premium to frozen turkey.

In a report released last week, the USDA warned that producers underperformed expected turkey production volumes in the third quarter of 2019. As a result, the USDA reduced its Q3 projection released in September by 1.4% to 1.43 billion pounds. The department also said it expects prices will rise as a result.

The Gro analysis took a deeper dive into turkey production figures to estimate how much prices will go up. The analysis, which analyzed 10 years worth of data, used the number of turkey eggs in incubators 14 to 20 weeks prior to the holiday season. Eggs incubated in August will be raised to slaughter weight between early November and mid-January—hens require 14 to 17 weeks to mature while toms require 17 to 20 weeks. In order to account for differences in overall production across years, the number of eggs in incubation in August was scaled by the number of turkeys produced each year, creating a ratio of eggs to turkeys. A regression model determined the relationship between these ratios and November producer prices. Applying this year’s ratio, we came up with the November estimate of 66 cents per pound, or 24% above last year’s producer prices.

In addition, other turkey supply data suggest a recent uptick in turkey prices, as shown in the chart above, is indicative of a larger market-cycle turnaround. Freezer stocks of turkey, released Wednesday, were down year over year by 6% to 528 million pounds as of Sept. 30. Included in this is 314 million pounds of the Thanksgiving centerpiece whole birds, down 5% from last year.

USDA NASS forecasts that the number of birds produced in 2019 will decline by 1.9% to 240 million head. This decline has been partly offset in 2019 by strong gains in bird weights. But bird weights have a stronger tendency to regress toward the mean than do the number of birds slaughtered, so overall meat-production growth may slow next year as bird-weight gains subside.

The number of poults placed in feeding facilities during September was down 13% from August, and was the lowest since September 2015. In the past decade, only 2015 and 2013 had a month with lower placements. And those years suffered, respectively, from the worst avian influenza outbreak in US history and the highest feed prices on record. 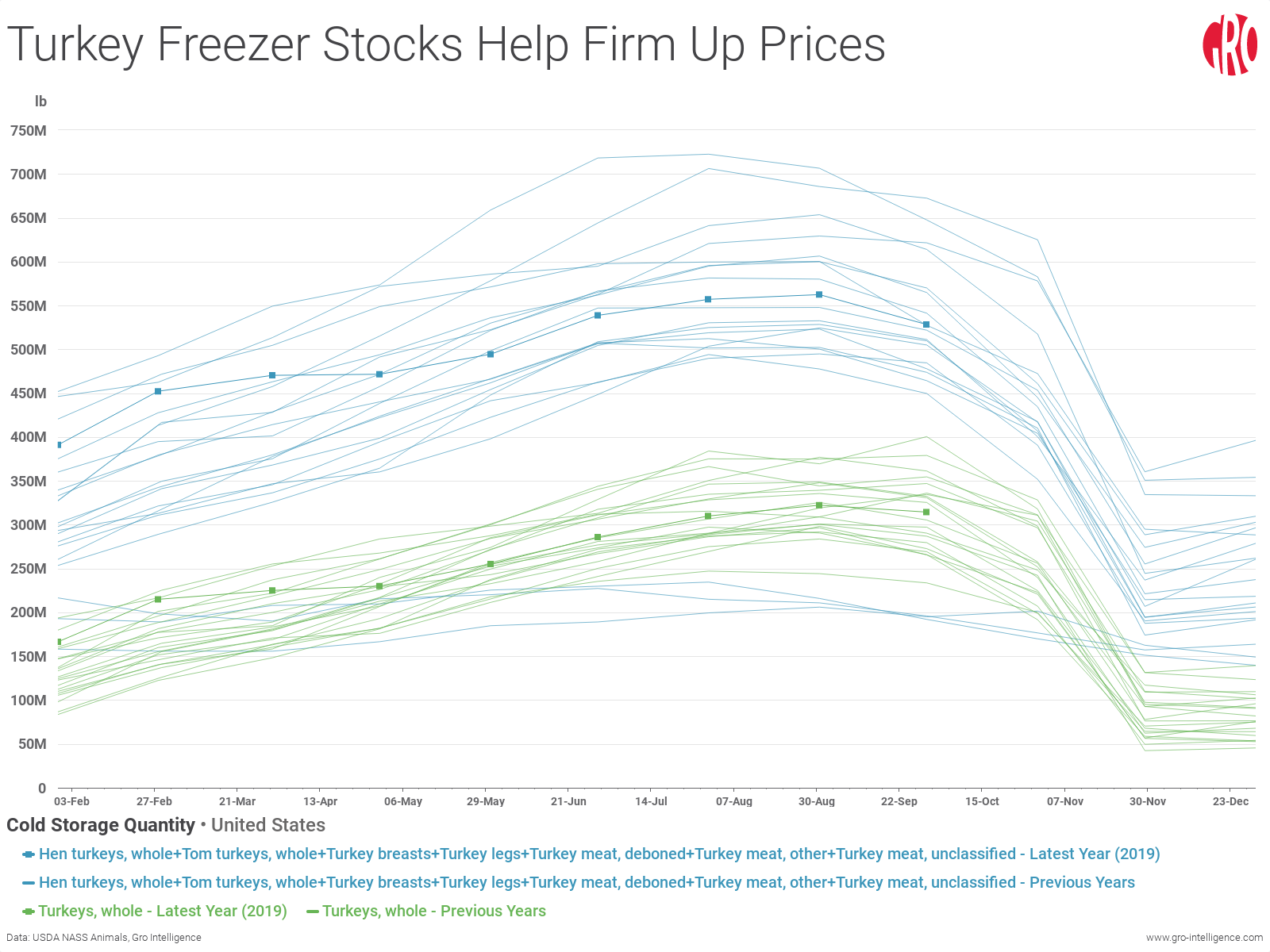 Thanksgiving is the most important day of the year for the turkey market, and stocks of whole turkeys (green lines) and total turkey meat (blue lines) build each year to satisfy the holiday surge in consumer demand. Stocks heading into Thanksgiving 2019 are falling below those of 2018, helping to support prices this year. (Latest year figures are shown as lines with markers, compared with previous years.) Click on the image to go to an interactive display on the Gro web app.
Link copied!
⌘ + C to copy
RELATED GRO ANALYSES

Will the US Produce Enough Soybeans to Meet Demand This Year?