Worldwide sugar stocks swelled this year, and the outlook is for more of the same in 2019, a trend that is expected to keep a lid on sugar prices for months to come.

Building the global stockpile, in part, was No. 2 exporter Thailand, where excellent weather and expanded acreage resulted in record production. In India, the introduction of new cane varieties brought about strong gains in yield. The European Union, not normally a big player in global sugar markets, added to the oversupply as deregulation of Europe’s sugar beet industry led to greater production and exports. Even a disappointing sugarcane harvest in industry-leader Brazil wasn’t enough to halt a dramatic rise in supplies.

Global stocks stood at 51.5 million tonnes, up 9.3 million tonnes, or 22 percent, for the 2017/18 crop year compared with a year earlier, according to the US Department of Agriculture. The market should remain well supplied for months to come. Expectations are for another year of robust production in Thailand and India. And new export subsidies in India should ensure more of its crop ends up on world markets.

In this Insight article, we utilize Gro Intelligence data to analyze key factors in the three main sugar producing countries and their impact on world sugar markets in 2019. Harvests in Thailand and India run from November through April, and in Brazil from April through December. 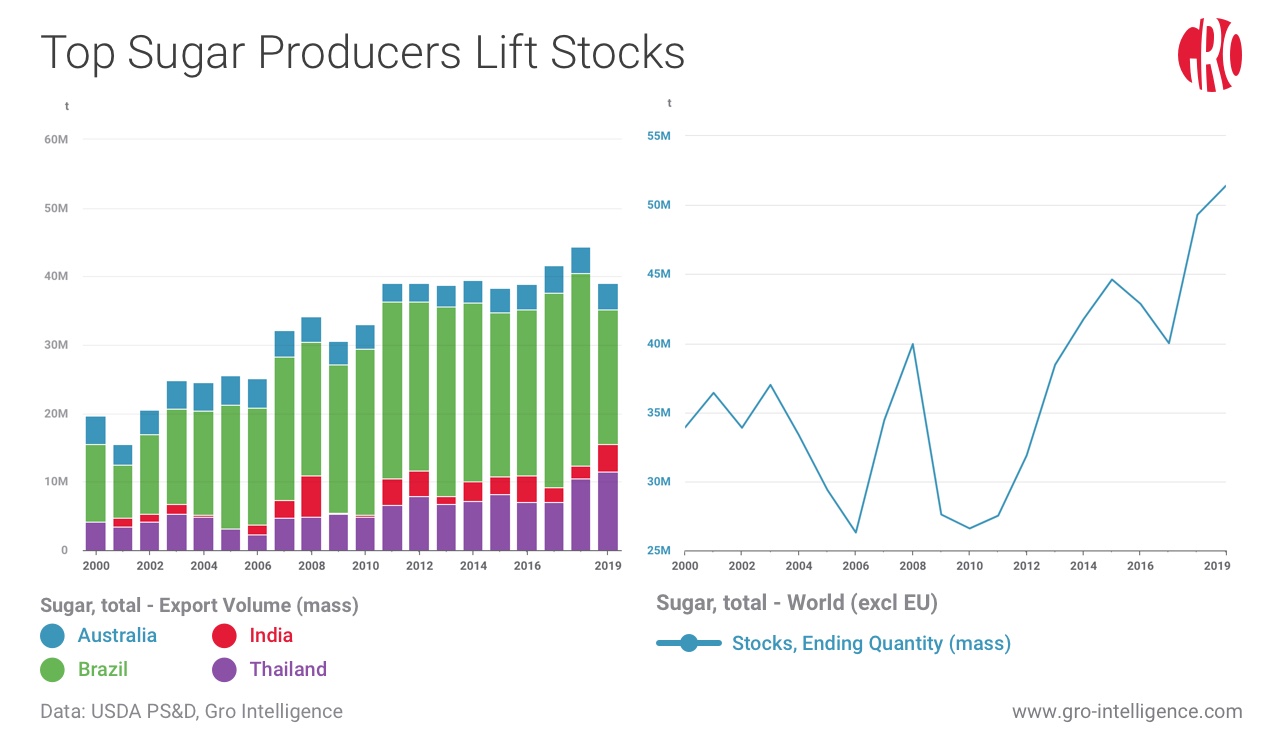 Exports of the four main sugar-producing countries are shown in the bar chart. Industry-leader Brazil’s exports are expected to drop to 19.6 million tonnes in the current crop year from 28.2 million tonnes last year because of a weak harvest. But record production elsewhere gave a big boost to global sugar stocks, shown in the line chart.

Weather played a big part in Thailand’s bumper sugar crop for 2017/18. Cumulative precipitation during the 2017 main growing season of May-October was 7 percent above the 10-year average, and significantly higher in key growing regions. Combined with significant planted area expansion—up 18 percent year-over-year—cane production exploded to a record 136 million tonnes. This year, the weather was not as good, but planted area remained large and the crop, which is just beginning to be harvested, is expected to be the second highest ever, at around 130 million tonnes. At the same time, domestic consumption of sugar is expected to fall about 2 percent from last year due to the Thai government implementing for health reasons an excise tax on beverages containing sugar. The result will be record export shipments, about evenly split between white and raw sugar, of over 11.5 million tonnes of raw-sugar value equivalent. 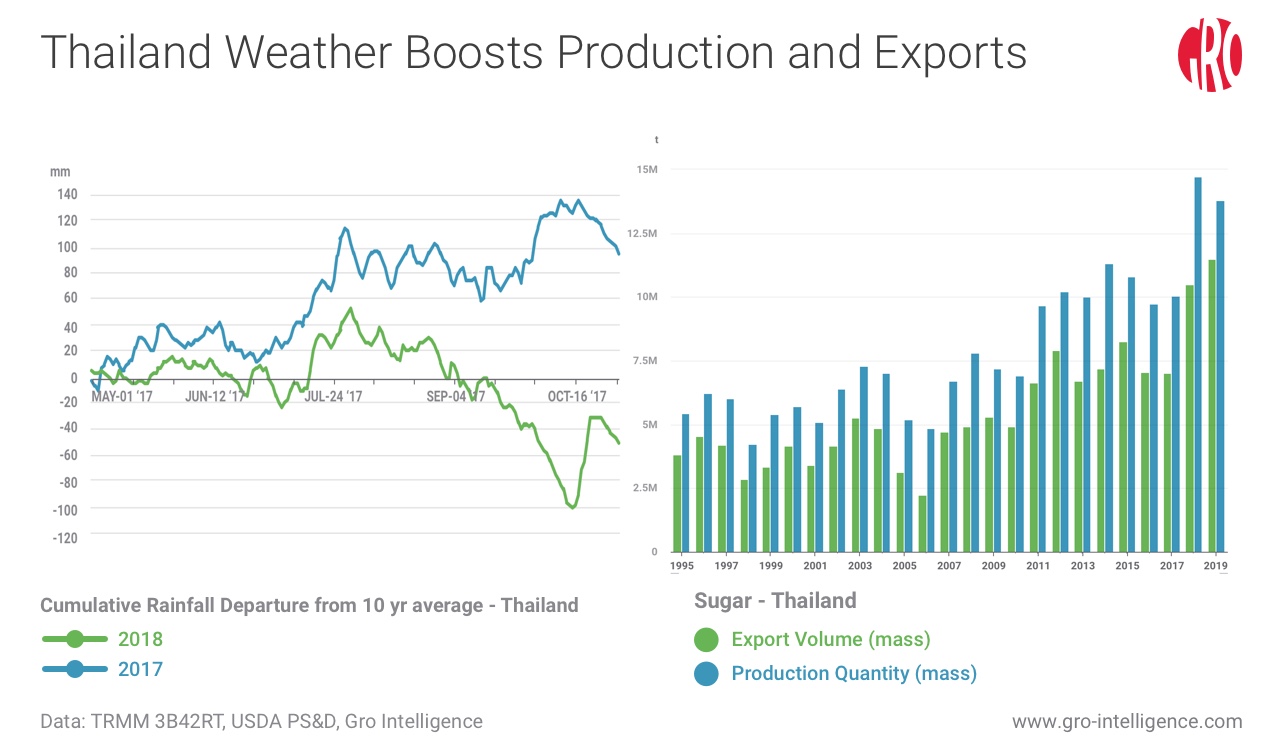 2017 was an exceptional year for rainfall in Thailand (line chart on left), leading to a record cane crop. 2018 was above average for most of the growing season, but fell below normal late in the season, so the crop will be lower year over year, but still very large. Consecutive large crops and declining domestic consumption will lead to record exports this season (bar chart on right).

The introduction of higher yielding cane varieties in Uttar Pradesh, the largest of India’s producing regions, led to production well above expectations in the 2017/18 season. Record production from the region is expected again for the harvest just getting underway. As a result, India’s domestic stocks have built substantially. In a bid to support domestic prices, the government issued a production and transportation based subsidy for exports of 5 million tonnes under the Minimum Indicative Export Quota (MIEQ) for the 2018/19 marketing year. A recent bump in world prices, which followed Brazil’s election of a pro-business president, made India competitive and exports are already flowing. India is only a periodic net exporter to the world market so these flows are significant to the global trade balance. It’s unclear how much sugar will eventually be exported, but any gains in the world market price relative to the Indian domestic market would increase the likelihood that the quota is filled. 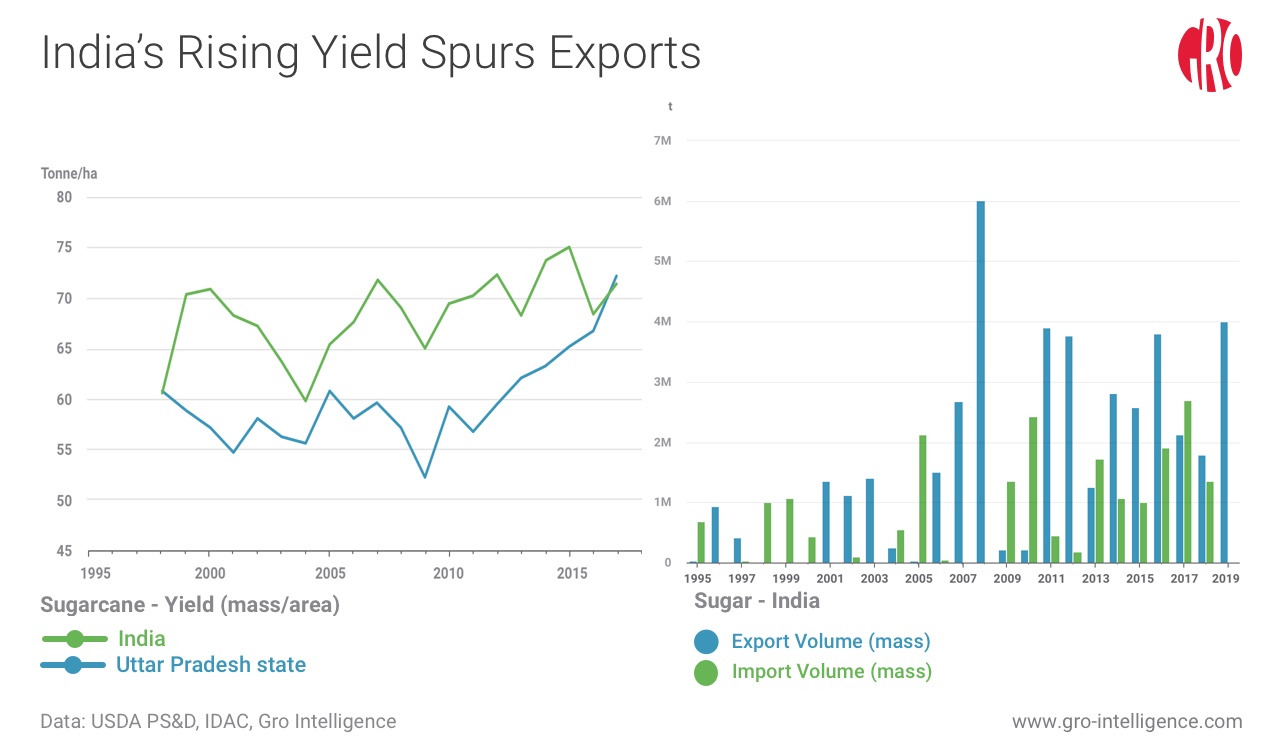 India’s Uttar Pradesh region saw a big gain in sugarcane yield (line chart at left) due to the introduction of a new plant variety. Yield is expected to be excellent again for the harvest that is about to start. The combined large domestic surplus from last season and the current one will allow net exports from India to be the largest since at least 2012 (bar chart at right).

The most recent Brazil harvest that is currently winding down has been disappointing, mainly because of dry weather. Cane production was lower than expected. More significantly, millers proved to have greater capacity for ethanol production than the market had thought possible, meaning less cane was allocated to sugar production. Most analysts had assumed the minimum amount of cane directed to sugar would be around 40 percent. As it turned out, the percentage as of Nov. 1, 2018, was 35.9 percent, according to the Brazilian Sugarcane Industry Association, or UNICA. That is well below the 46.5 percent of cane allocated to sugar in 2017, and below the previous record low of 39.7 percent in 2008. (Brazil’s market for ethanol is able to soak up the additional supplies in part because the country mandates biofuel content of a relatively high 27 percent, and most new cars are able to run on all ethanol.)

In most years, a combination of a poor Brazilian cane harvest and record allocation of cane to ethanol would cause concern about sugar shortages on global markets. But this year, the significant rebuild in global stocks in the 2017/18 season and ample availability of exports from Thailand, India, and the EU in the upcoming 2018/19 season are offsetting any concerns about Brazil. 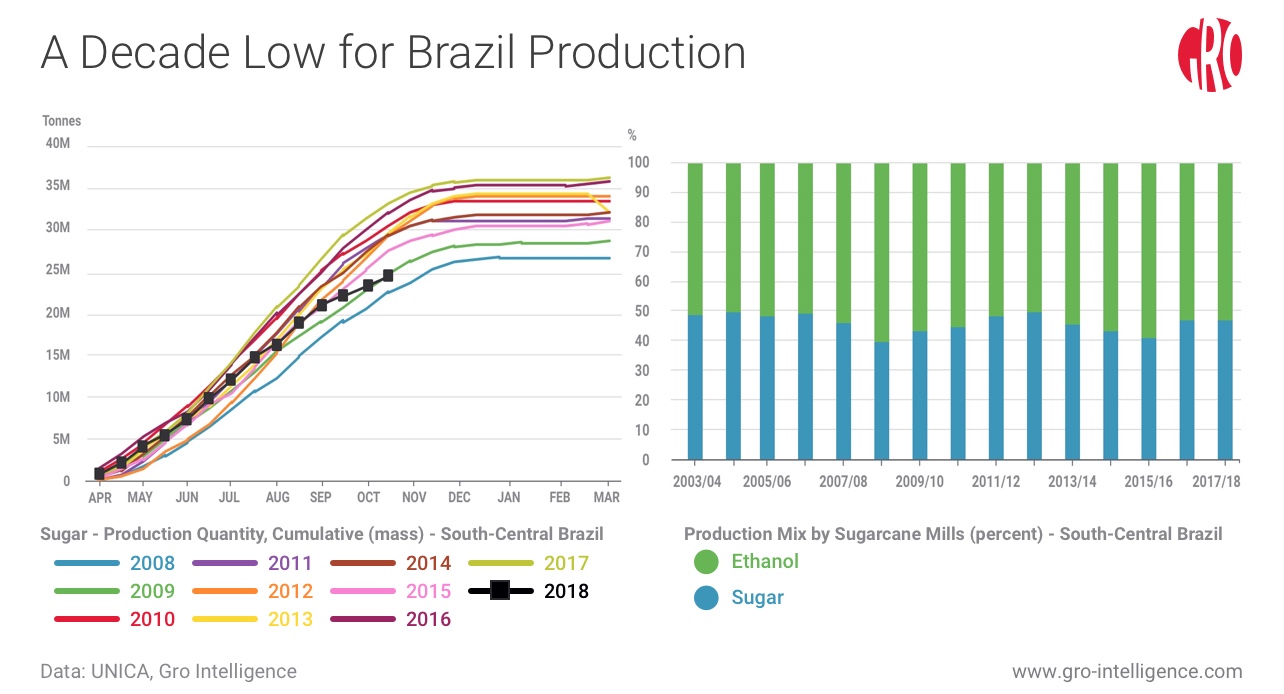 Cumulative sugar production as of Nov. 1, 2018, is the lowest since 2008 (line chart at left). In the latest season, Brazil’s millers allocated just 35.9 percent of cane to making sugar and the rest to making ethanol. The sugar allocation was far below that of recent years (bar chart at right).

Global trade flows are forecast to be in surplus through the traditionally tight period between Brazil crops due to record Thai exports and the largest exports from India in several years. Market prices will be hemmed in on the upside, as any rally in world sugar prices compared with India’s domestic market would increase that country’s exports, and Brazilian millers would be able to shift more cane away from ethanol and into sugar if the relative price became attractive. On the downside, low prices could lead to fewer planted acres, most likely from sugar beet producers who can make more significant year-to-year changes, although that outcome would affect the 2019/20 season. Assuming normal weather in the big exporting countries of Brazil, Thailand, and India, the market may have to wait until after the next Brazil crop in late 2019 for a draw down of global sugar stocks.