Gro Intelligence’s newest model is forecasting Brazilian soybean yields and production, outcomes that will have big implications for global trade flows in 2020 and especially for the new China-US trade deal.

Currently, Brazil is on track to yield 3.22 tonnes of soybeans per hectare, according to the Gro model. While that’s comparable to last year’s yield, soybean production is expected to rise 3.2% to a near-record 118.8 million tonnes because of greater area planted, based on Gro’s area model estimate. 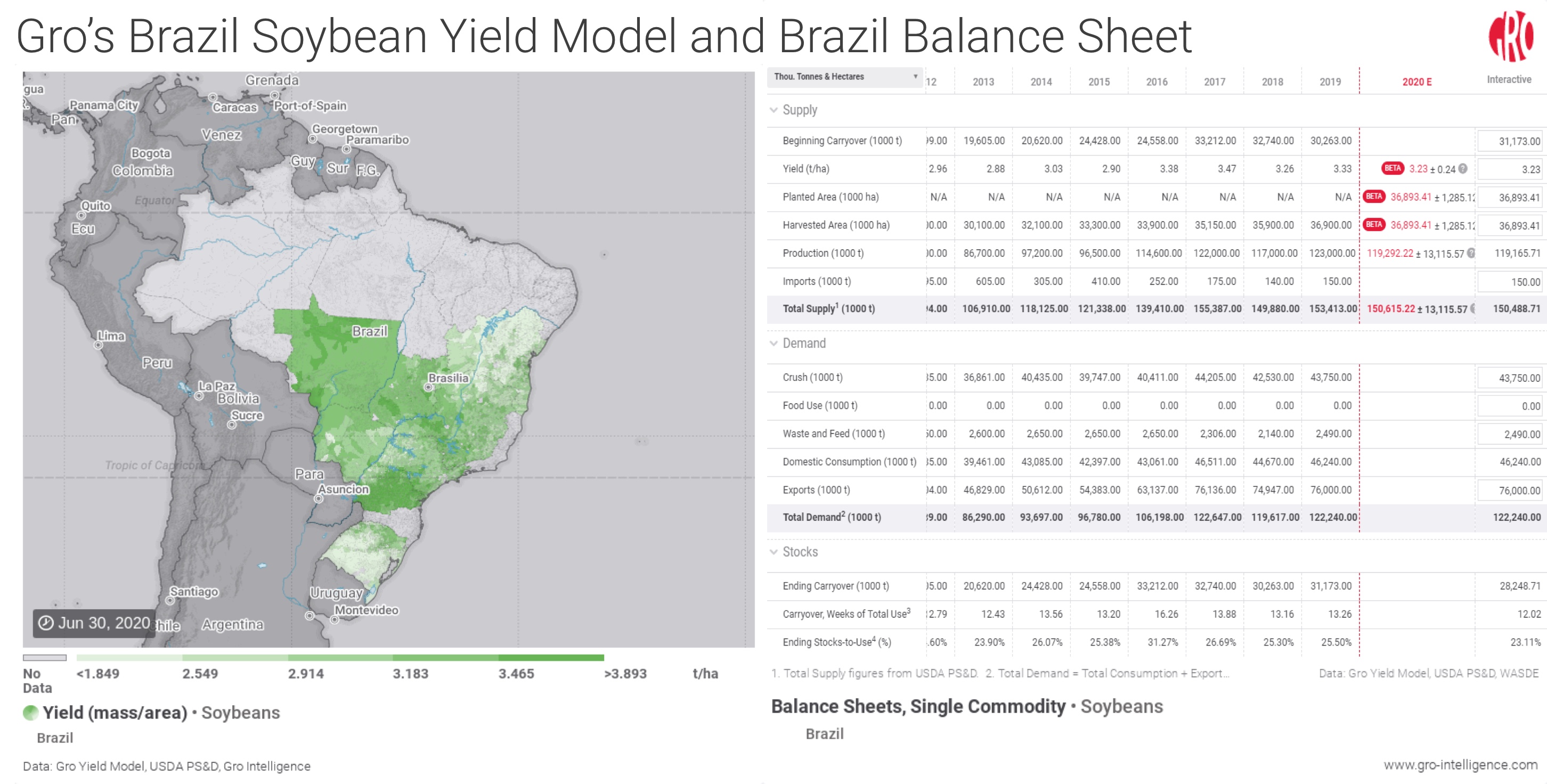 The map on the left shows Gro’s Brazilian soybean yield model broken down by district. The model currently indicates poor yields (light green) in the southernmost state of Rio Grande do Sul, whereas yields in Parana just to the north are far better (dark green). Bahia in the northeast is also forecast for relatively poor yields, while Mato Grosso in the middle west is predicted to have record yields. The table on the right shows the current Gro yield model output and area model forecast (both shown in red) in the context of Brazil’s soybean supply and demand balance sheet. USDA PS&D historical data and estimates are there for comparison. Click on the image to go to an interactive display in the Gro web app. In the balance sheet, users can make their own adjustments by clicking figures on the far right column labeled Interactive.

China has pledged to purchase over two years at least $32 billion more in agricultural goods from the US than it did in 2017, before the trade war began. The biggest share of that is likely to be soybeans. Another stipulation, however, allows China to base its purchases on market conditions, which raises questions about both the timing of China’s purchases and the possibility of not hitting the pledged amounts.

Brazil is the largest soybean producer and exporter in the world and the size of its crop is crucial for predicting global trade flows. Over the last several years, Brazil has increased market share of global soybean exports to 50%. Meanwhile, the US share fell to 32% in 2018/19 from more than 40% on average during the previous 10 years.

Gro’s forecast yield for Brazilian soybeans can still change significantly, as January is the key pod-filling period for the majority of the crop. Average yield in Rio Grande do Sul state is forecast to be down 20% from last year due to a drought in November and December. According to forecasts from NOAA’s GFS, a data set on the Gro platform, the state is in for another 10 days of dry weather. Gro’s model updates daily, which is an important feature for tracking the crop.

In Brazil, CONAB, an industry organization, and IBGE, a government data provider, provide monthly updates on crops based on surveys and crop tours. In its latest bulletin on Jan. 8, CONAB acknowledged the dryness in Rio Grande do Sul, but didn’t adjust its yield forecast for the state. CONAB is currently forecasting total Brazilian national production of 122.3 million tonnes.

IBGE won’t be releasing its first 2020 crop forecast until next month. IBGE and CONAB data are both available on the Gro platform for users to perform historical analyses and comparisons. The two Brazilian sources tend to be closely aligned on national production figures, with an average annual difference of just 1.2%.

Other soybean growing areas in Brazil are doing quite well. Parana state yields are forecast to increase 24% from 2019, a year when drought and high temperatures damaged the crop. Mato Grosso, the largest producing state, is predicted to have record yields.

As Brazil’s crop forecast size increases or declines, so will global supply available for export. Any decrease in tonnage from Brazil will likely have to be made up for by exports from the US. On the other hand, if Brazil ends up producing a bumper crop (the USDA’s current Brazil forecast is for 123 million tonnes, which would be a record), that will compete with US exports for the rest of 2020 and influence US planting decisions in the spring.

Gro will be regularly adjusting our balance sheet forecasts to take into account yield updates from Gro’s model and the latest reports on export data from Brazil’s MDIC, a government department, and the USDA. 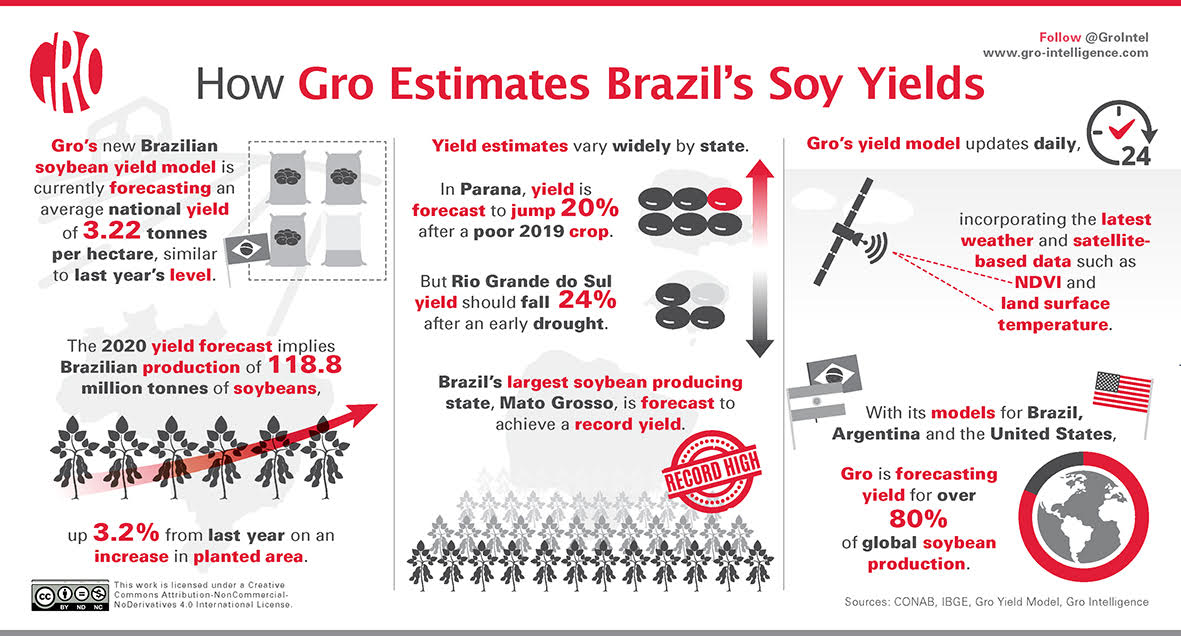