Indonesia has faced stiff worldwide criticism for the rapid expansion of its oil palm plantations at the expense of deforestation. The European Union recently enacted laws to curtail its use of biofuels made from the Southeast Asian country’s palm oil, sparking an unusual trade war fought over sustainable agricultural practices.

Indonesian acreage devoted to oil palm cultivation has nearly tripled since 2000 to 12 million hectares. Much of that growth has come amid illegal clearing and burning of native tropical forests. This year, forest fires are the worst they’ve been in years, sending heavy smoke drifting over populated areas of Indonesia, Malaysia, and Singapore.

The EU imports large quantities of palm oil and palm-based biodiesel, which is mixed with diesel fuel. Under recent regulations, biodiesel imports and its use will be restricted until 2030 and then stopped altogether.

Deforestation directly impacts greenhouse gas emissions, making palm oil “the most damaging biofuel for the planet,” declared a parliamentary group in France when that country recently enacted restrictions on the use of the biofuel stricter than the EU’s.

Indonesia has shot back with its own trade measures, proposing import taxes of 20%-25% on European dairy products. Government officials have also hinted that the dispute could weaken Europe-based Airbus’ chances of winning a piece of Indonesia’s big planned purchase of airplanes.

European countries may find they have limited leverage to influence Indonesia’s palm oil industry practices. The EU accounts for just 10% of world palm oil demand, and other big international buyers are likely to absorb any excess supply. In particular, China is expecting this year to increase by one-third its imports of edible vegetable oils, including palm, to offset declines in domestic soy oil production. 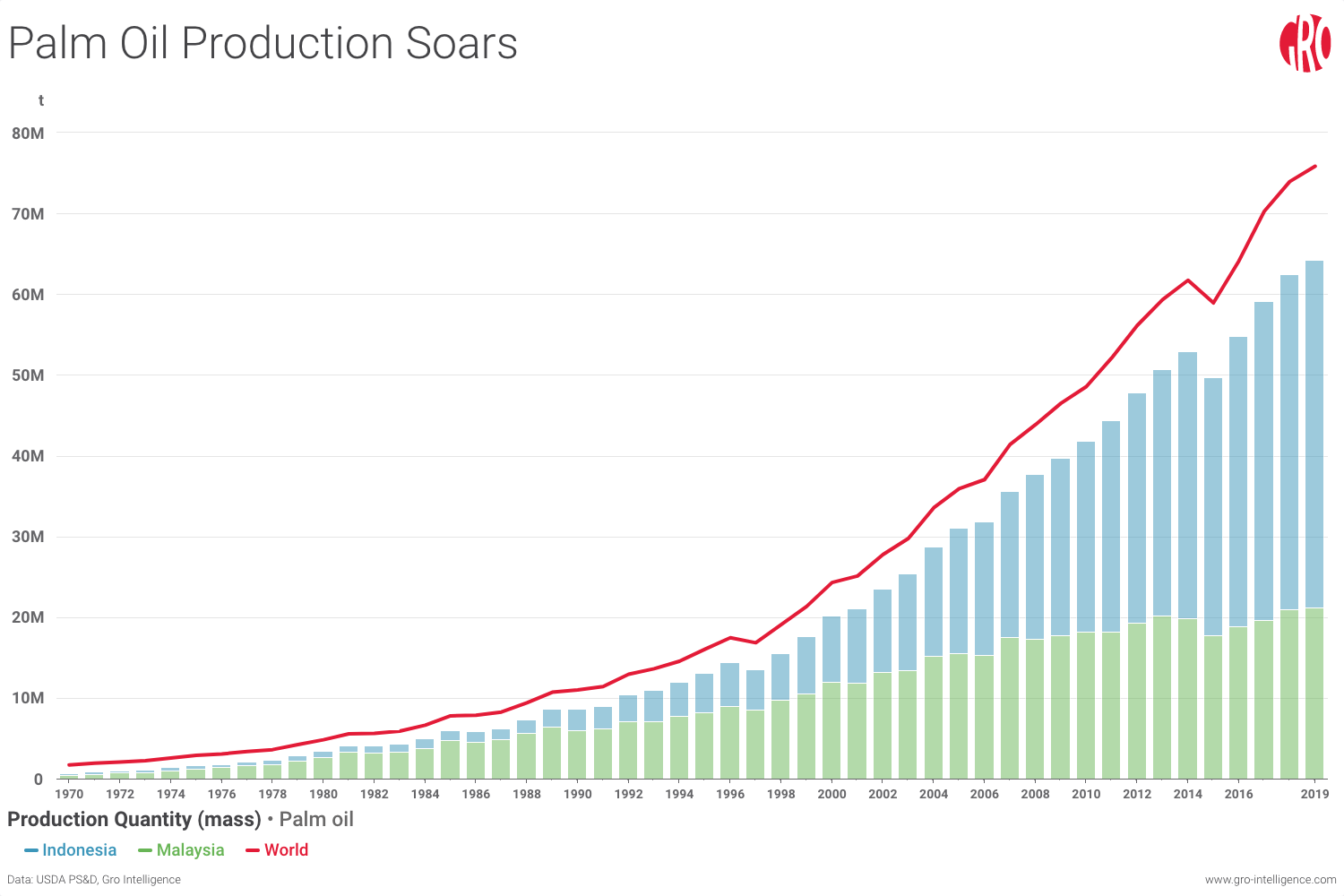 The chart above shows some 85% of the world’s palm oil comes from two Southeast Asian countries. Malaysia (green bars), the lead producer for many years, was overtaken by Indonesia (blue bars), which now produces 57% of global palm oil supplies (shown with the red line). Click on the image to go to an interactive chart on the Gro web app.

Indonesia produces 57% of the world’s palm oil, far above No. 2 Malaysia’s 28%. It’s a key industry in Indonesia, employing some 3 million people and contributing 4.5% to the country’s GDP, according to the United Nations Development Programme. Globally, most palm oil is used in cooking and prepared foods. The rest is made into biodiesel, which is created from the esterification of palm oil to form a palm methyl ester (PME). The USDA estimates Indonesia will produce 43 million tonnes of palm oil this year, up fourfold from 10 million tonnes in 2001.

This year, through August, nearly 330,000 hectares of Indonesian land was burned, and in mid-September there were 2,719 so-called hotspots burning across the island nation, according to Indonesia’s National Disaster Mitigation Agency. Political leaders in neighboring Malaysia have called the migrating smoke “ecological warfare.” Indonesia has filed charges against more than 130 companies and farmers for illegal burning this year, and it has cut off access to plantations operated by 29 different companies. 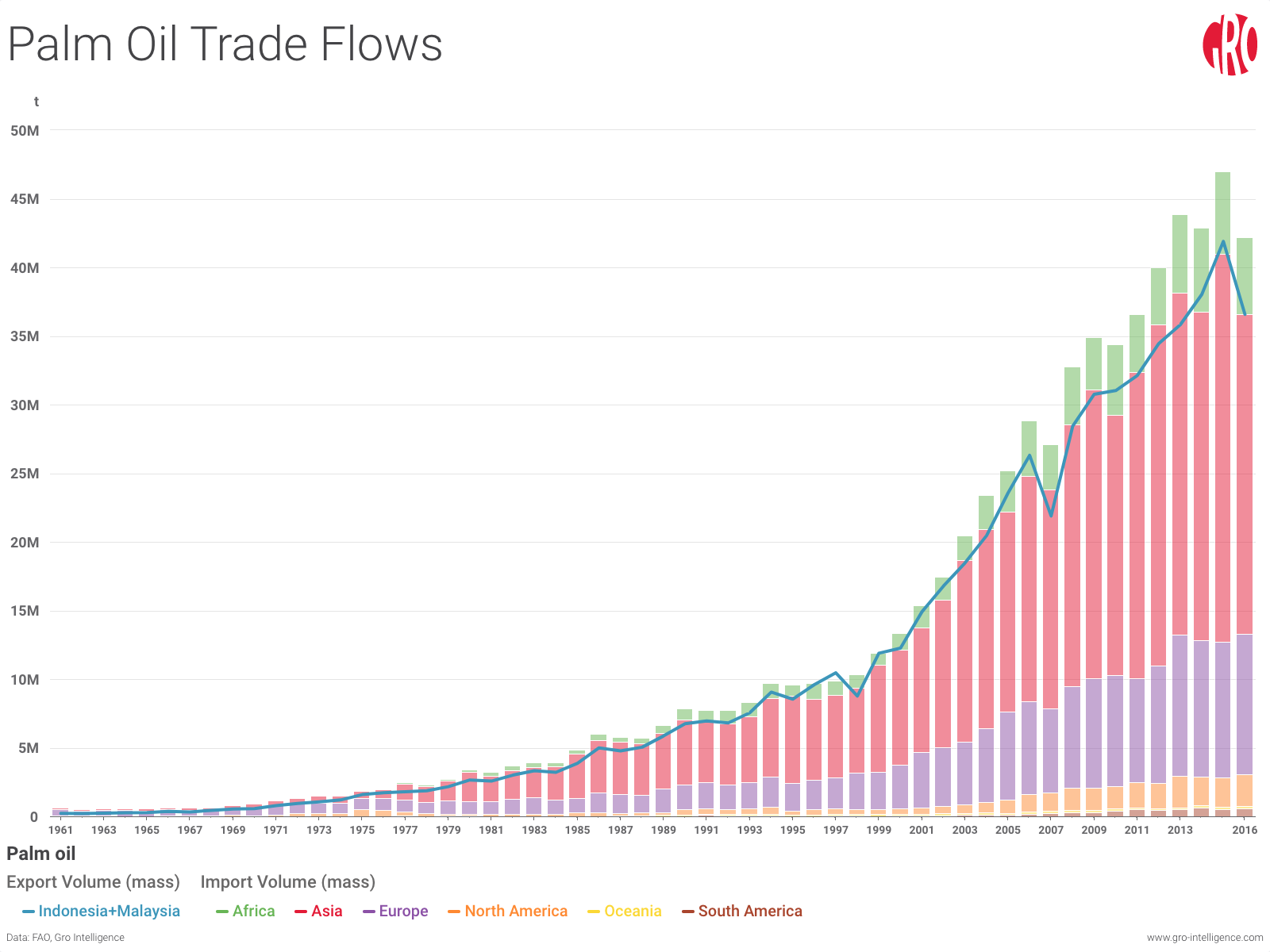 The chart above shows combined palm oil exports from Indonesia and Malaysia (blue line) versus the distribution of palm oil importers by region. Other Asian countries (red bars) are by far the largest buyers of palm oil. Europe (purple bars) comes in second. Click on the image to go to an interactive chart on the Gro web app.

The growth of the palm industry in Southeast Asia has come amid incentives around the world to use biofuels derived from food crops in order to reduce demand for fossil fuels and curb greenhouse gas emissions. But greater use of biofuels, especially from palm oil, has had its own adverse environmental effects. Early this year, Malaysia announced plans to halt expansion of its oil palm plantations to improve its reputation and prevent potential EU duties. The EU is Malaysia’s second-largest customer for palm oil, behind India, taking around 12% of the nation’s palm oil exports and nearly a third of its PME exports.

The EU tried unsuccessfully in the past to limit imports of biofuels from Indonesia and other countries, but those actions were aimed mainly at protecting domestic industry. In 2016, anti-dumping duties imposed by the EU were shot down by the World Trade Organization (WTO), permitting biofuel imports into the EU to resume. European industry officials complained that palm-oil-derived biodiesel and palm methyl esters could be imported for $50-$60 less per tonne than the cost European biodiesel producers were paying for their feedstock.

In recent months, the EU took new action against palm-based-biodiesel use on the basis of supporting sustainable agriculture. The EU implemented new policies to reduce and eventually eliminate the use of palm oil as a biofuel in the bloc, while leaving the door open for imports and domestic production of biofuel from other sources. The European Commission, the EU’s executive branch, justified its move based on calculations of the relative impact various biofuel feedstocks have on the environment.

The commission found that between 2008 and 2015, increased production of biofuels worldwide accompanied an increase of nearly 100 million hectares of cultivated crops, some of this through deforestation. In the case of corn, sugarcane, and soybeans—which have all seen significant expansion as biofuel feedstocks—the amount of associated deforestation was 5% or less of the growth in area under cultivation, according to the commission.

Oil palm, on the other hand, has seen both the fastest expansion in area planted and the greatest level of associated deforestation. The commission estimated that 70% of the expanded palm plantation area was linked to deforestation. Furthermore, 18% of the deforested area was associated with the destruction of peat-rich lands, which release particularly large amounts of carbon when burned. 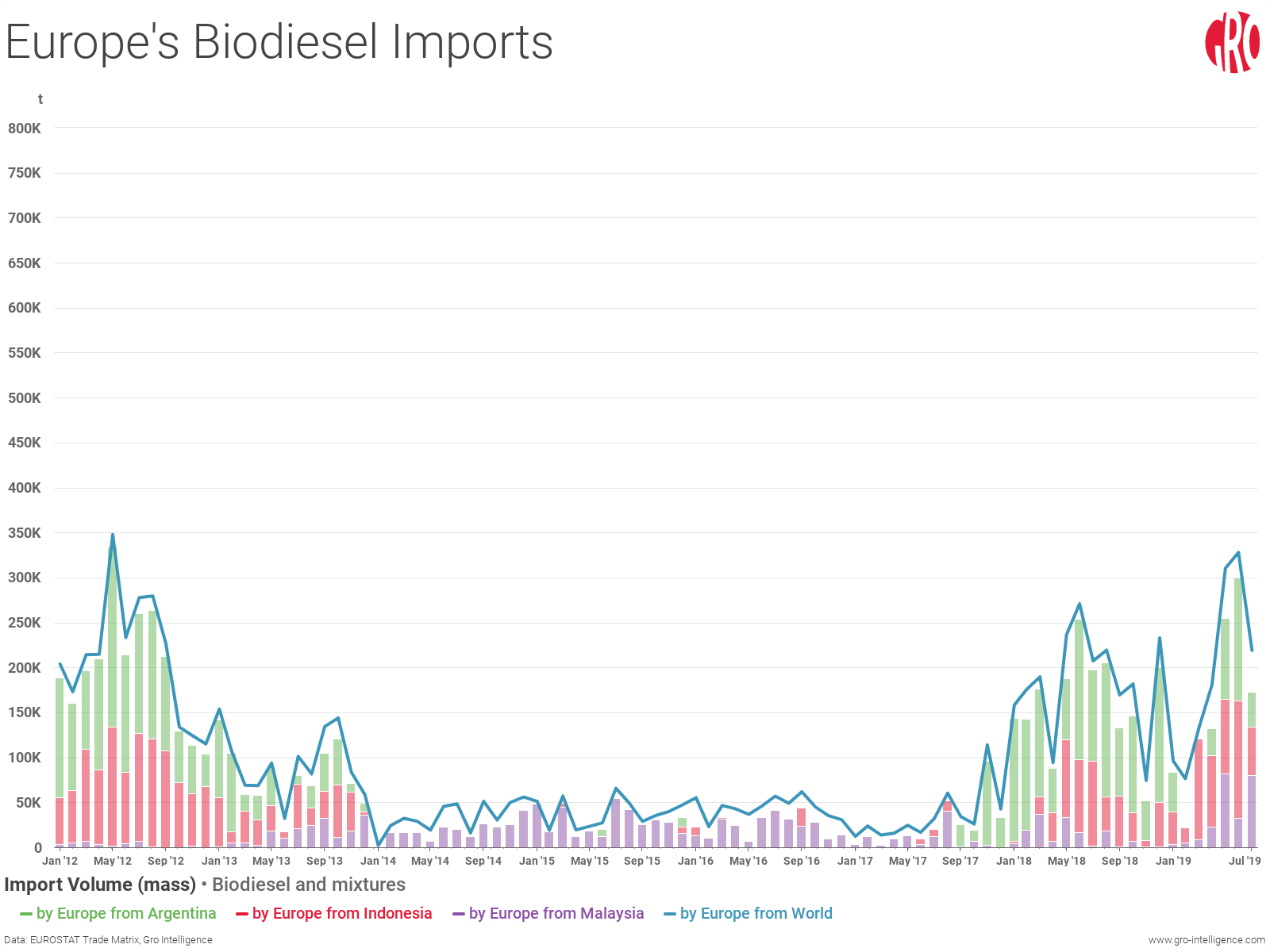 European imports of biodiesel rebounded in late 2017 after the EU was forced to rescind anti-dumping duties put in place in 2013. The chart above shows Europe’s total biodiesel imports (blue line) and major origin countries. Imports from Argentina (green bars) resumed in late 2017 while Indonesian biodiesel (red bars) began flowing again to Europe early last year. Imports from Malaysia (purple bars) have remained relatively steady over the past six years. Click on the image to go to an interactive chart on the Gro web app.

The EU policy, enacted in May, phases out by 2030 use of biofuel feedstocks that have a high indirect impact on land use, effectively singling out palm oil. The use of such biofuels will be capped at 2019 levels until 2023, and then will be gradually eliminated through 2029. The EU defined feedstocks with high indirect impact on land use as those whose share of expansion into land with high carbon stock increased beyond 10% since 2008 and whose annual expansion was greater than 1%. The policy is part of the EU’s new Renewable Energy Directive, or RED II, which sets binding renewable energy targets for member states.

The EU ban affects all countries producing palm oil and palm-based biodiesel. However, the EU in August also imposed preliminary anti-dumping duties of 8%-18% on biodiesel imports specifically from Indonesia. Under the new tariffs, PME imports from Indonesia are taxed, but palm oil imports aren’t, allowing potentially profitable production of PME within the EU. The EU restrictions don’t affect the use of palm oil for human consumption, which accounts for less than half the EU’s palm oil imports.

No Shortage of Buyers

Indonesia has said it will appeal the new EU policies to the WTO. The Southeast Asian country also has proposed a tit-for-tat increase in import taxes on European dairy products at a 20%-25% level. Indonesia’s total dairy and egg imports amount to $1 billion per year, according to government figures. The country’s trade minister has asked importers to look to Australia, New Zealand, and the United States to meet their dairy needs.

In addition, China is positioned to take advantage of any excess supplies of palm oil. The country’s outbreak of African swine fever has not only cut Chinese hog production, it's also limited China’s demand for soybeans and soybean meal. As a result, as China’s soybean crushers produce less meal, they also produce less edible soybean oil. The USDA estimates that China’s soybean meal consumption will fall this year for the first time since 2006 to 66 million tonnes--a drop of 5.3%, which is the largest percentage point decline since 1990/91. China will produce 6% less soybean oil this year, the USDA estimates. 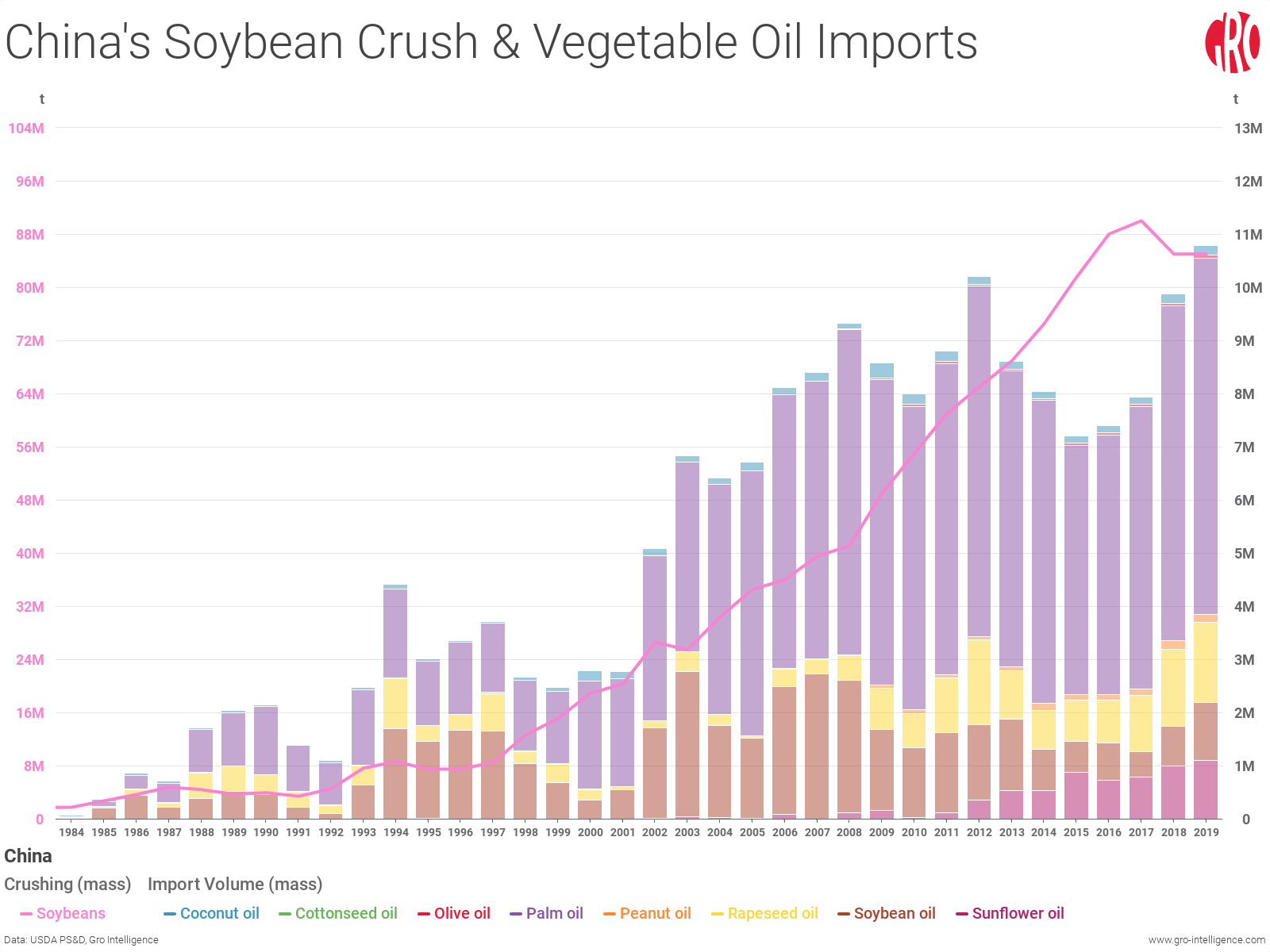 The bars in the chart above show the ebb and flow of Chinese vegetable oil imports, broken down by oil varieties. The outbreak of African swine fever has reduced China’s soybean crush rate (pink line), resulting in lower production of soybean meal and soy oil. Beijing expects vegetable oil imports this year will increase by 33%. Click on the image to go to an interactive chart on the Gro web app.

China National Grain and Oils Information Center (CNGOIC) estimates that China will import 10 millions tonnes of vegetable oil this year, 33% more than last year. Vegetable oils are highly substitutable, meaning China can make up for its lost soybean oil by importing, for example, soybean oil from South America, or canola oil from Canada, or palm oil from Southeast Asia. China and India in particular, routinely switch between soybean oil and palm oil for their import needs based on price. This year, the price spread between soybean oil and palm oil on China’s Dalian Commodity Exchange has widened significantly, making palm oil a good option for end users. China’s palm oil imports in the first eight months of this year are up almost 60% from the same period a year earlier. 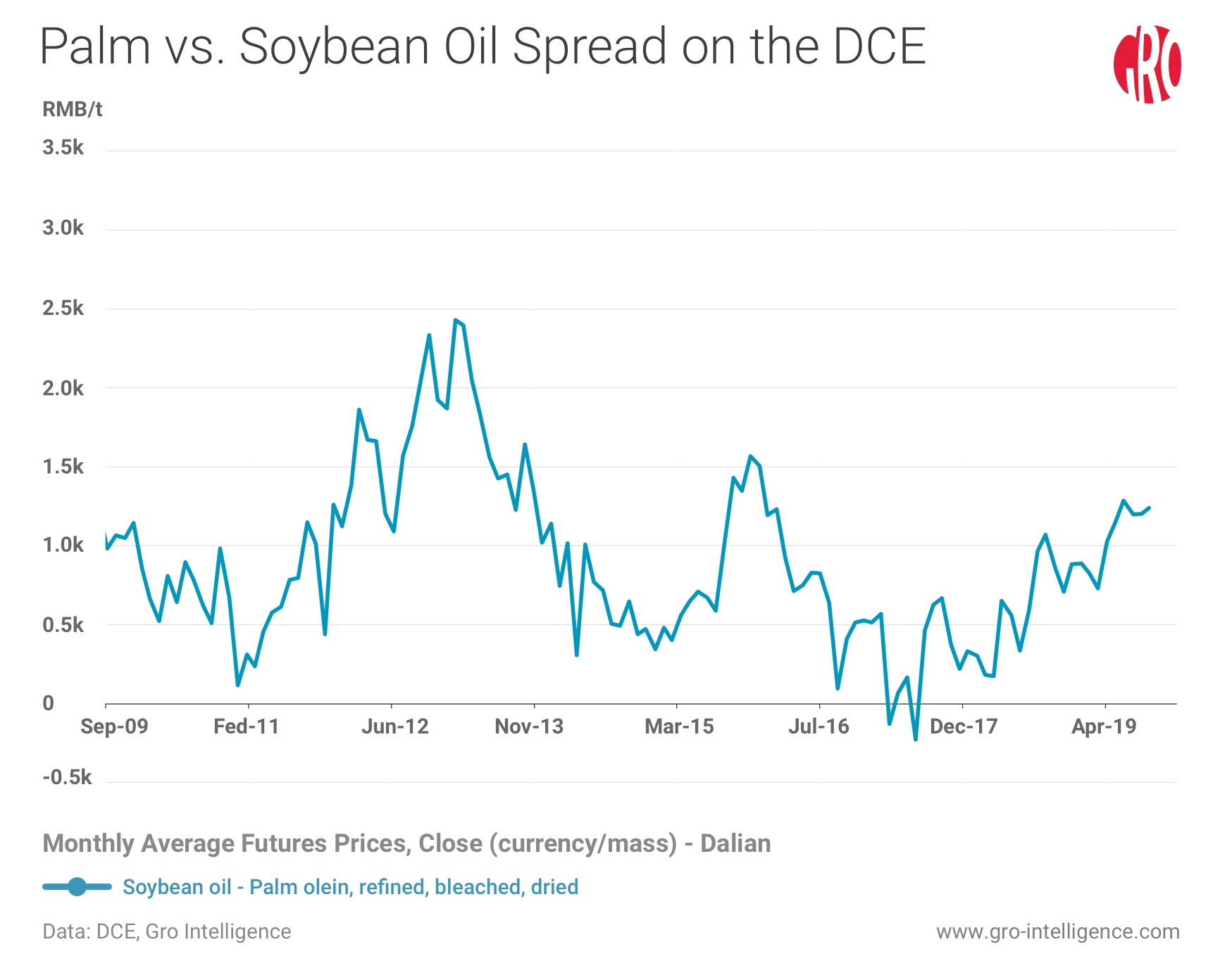 The futures price spread between soybean oil and palm oil on China’s Dalian Commodity Exchange shows soy oil requiring an increasing price premium to palm. Palm oil’s discount relative to soy is the widest its been since late 2015 and is incentivizing strong Chinese demand for imported palm oil.

The EU’s new policies to limit consumption of palm-based biofuels reflect an effort to combat climate change. EU data shows that as developed markets have worked to shift toward renewable biofuels, the amount of land used to cultivate crops has expanded. Forests have been cleared to make way for increased food crop use highlighting the unintended effects of biofuel legislation. Palm oil has been disproportionately linked to deforestation, compared with other biofuel feedstocks such as corn, soybeans, and sugarcane, the EU found.

However, Europe’s ability to effectively limit palm oil production in Southeast Asia is questionable. Global population growth will bring increased vegetable oil demand. And China and India are particularly well positioned to benefit from a drop in palm oil demand from Europe. As a result, the new EU policies may end up serving a mostly symbolic purpose. 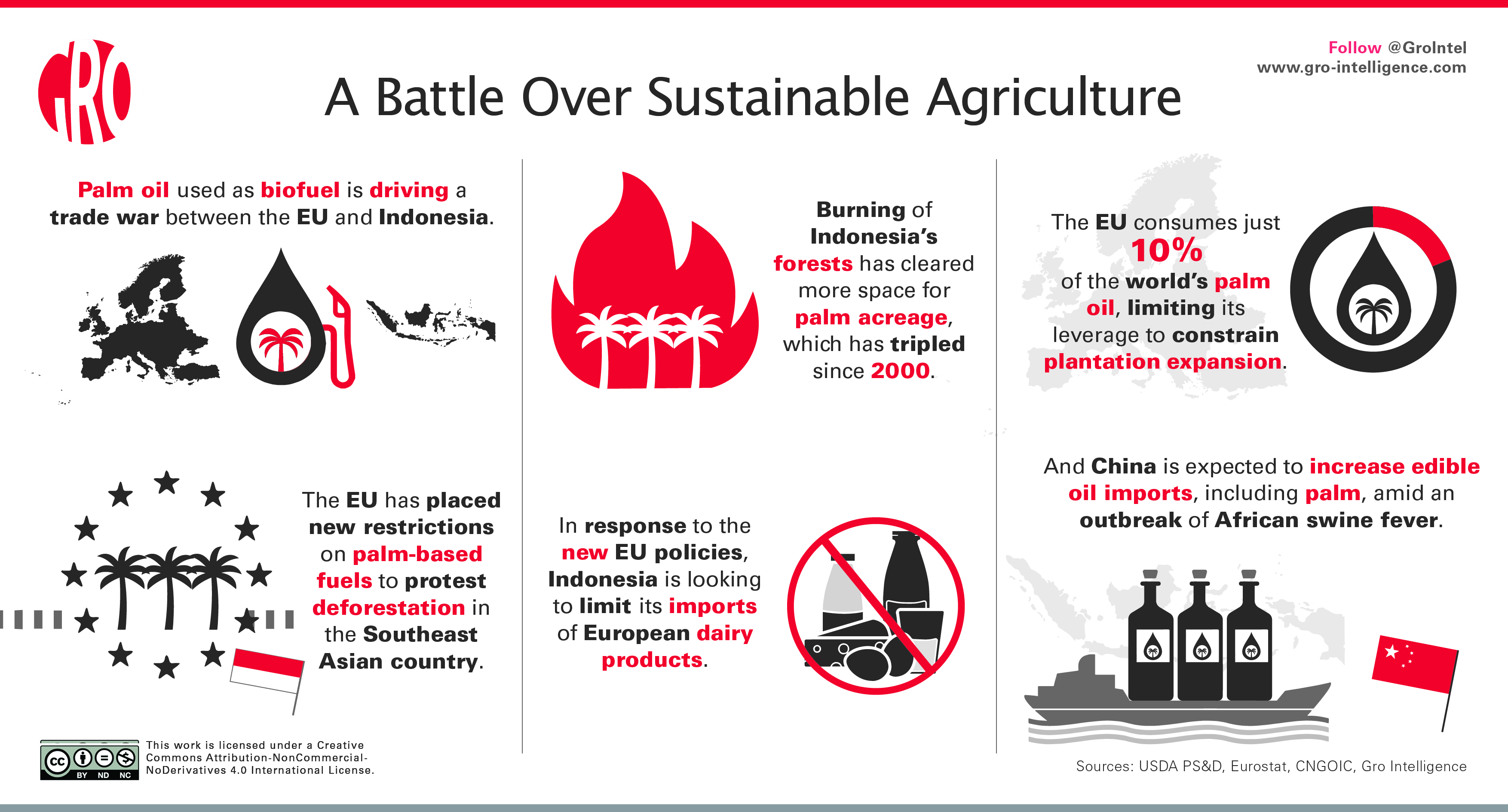