In a year of exceptional uncertainty for the US corn crop, industry crop tours and satellite-based models are taking on added significance as markets chase after reliable yield predictions.

Last week the grain industry watched as Pro Farmer, an agricultural news organization, conducted its annual crop tour, and 125 scouts made their way across nearly the entire US Corn Belt. Results from the Pro Farmer tour provide markets with important objective crop data. They also serve as a reality check for Gro’s machine-learning-based yield model that relies heavily on remotely sensed satellite and ground-based inputs.

Farmers, traders and agribusinesses all need to know how the current crop is progressing to make business and investment decisions. Earlier this month, the USDA shocked markets when it published estimates for 2019 corn production that were well above market expectations. The USDA’s decision to omit objective yield survey data in its August WASDE report heightened the markets’ skepticism about the department’s forecasts.

In this Featured Insight, we review the results of the Pro Farmer tour, on which Gro representatives participated, and we compare those results to current forecasts from the Gro yield model. By identifying areas where the two sets of results largely agree, and analyzing the reasons where they don’t agree, we aim to shed even greater light on the prospects for this year’s troubled crop. 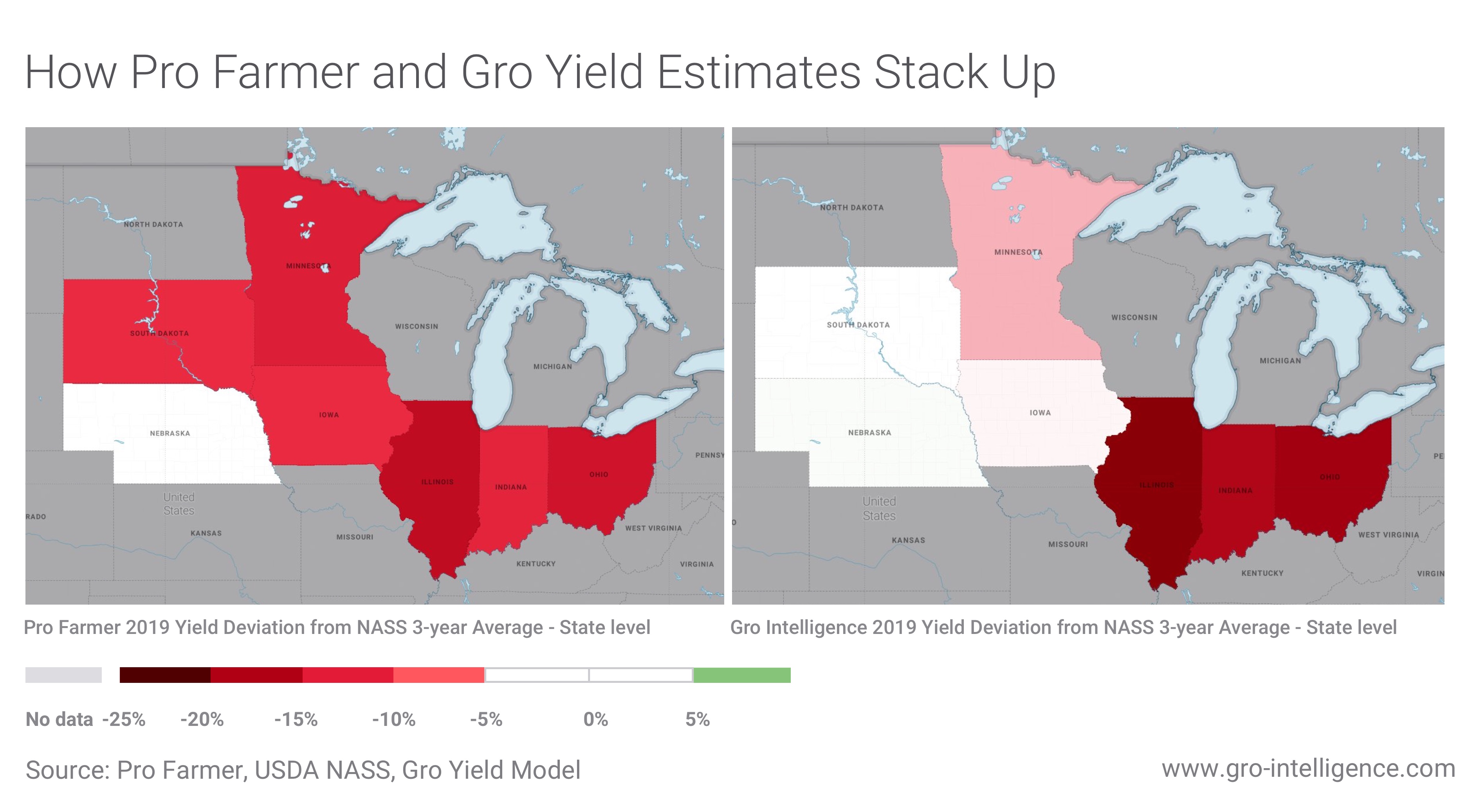 The charts above show how the Pro Farmer (left) and Gro Intelligence (right) state corn yield estimates for 2019 compare with USDA NASS average final yields for the previous three years. Compared with Pro Farmer, Gro’s corn yield model points to greater declines in the eastern Corn Belt and has a more optimistic outlook for the west.

Earlier this month, in its World Agricultural Supply and Demand Estimates (WASDE) report, the USDA boosted its national corn yield forecast to 169.5 bushels per acre from its previous projection of 166 bushels per acre. (Last year’s average yield was 176.4 bushels per acre.) With an estimated 90 million acres planted to corn, production was projected to reach 13.9 billion bushels, more than 5% above market expectations.

Ahead of the August report, record planting delays and wet conditions convinced the markets that yields would fall to their lowest levels since 2013. Gro’s robust satellite-data-based model called for a national yield of 162 bushels per acre on the day of the USDA report.

Weeks later, skepticism about the USDA forecast still runs high. The percentage of the US corn crop rated in the good-to-excellent range sits at its lowest level since 2012, according to USDA NASS surveys. Crop maturity nationally is running nearly two weeks behind its normal, or five-year-average, pace. In addition, the USDA NASS announced in March that it would delay collecting objective yield data until September, a month later than it has in the past. Instead, the August WASDE estimates were based on farmer survey and satellite data. 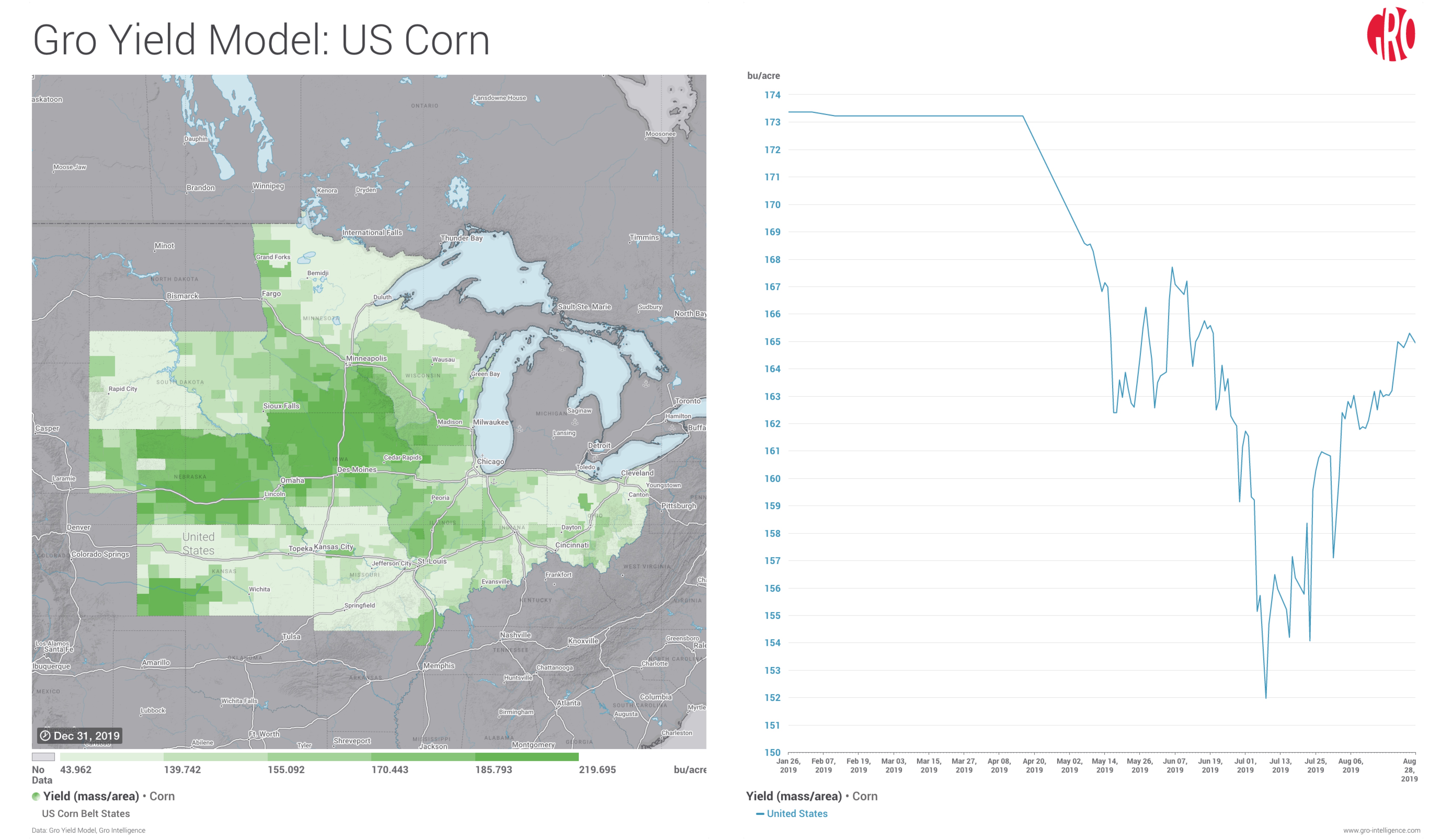 The charts above show Gro’s current US corn yield model estimates. On the left are county-level yield estimates, with the strongest yields expected in Iowa and Nebraska in 2019. The right-hand chart shows the progression of Gro’s US national yield estimate since the beginning of the season. Click on the image to go to an interactive map on the Gro web app.

The Pro Farmer Midwest Crop Tour, now in its 27th year, is well respected for its extensive data gathering. The tour’s consistent methodology and its long history of data collection make it an important focus every year. Tour scouts gather field-level data similar to that provided in the USDA’s objective yield survey, including measuring plant population, the length of ears, and the numbers of kernels around each ear to arrive at a yield estimate. Pro Farmer also adjusts its estimates to take account of soil moisture availability, which affects a plant’s ability to fill kernels, and delays in crop maturity, which can limit the amount of time a plant has to reach maximum ear weight before temperatures drop.

At the end of the tour, on Aug. 23, Pro Farmer announced its official national and state-level yield estimates. Nationally, Pro Farmer projects average corn yield of 163 bushels per acre. That’s nearly 4% below the USDA’s current projection and would trim more than 500 million bushels of corn off the US balance sheet, taking ending stocks down by nearly a third from last year.

By contrast, Gro Intelligence’s US Corn Yield Model currently forecasts 165 bushels per acre, which would lead to a smaller, 20% cut in US corn ending stocks year over year. Gro’s machine-learning-based model, which has successfully anticipated USDA final results in previous years, compares historical yield information with factors such as satellite-derived climate and crop health data, along with crop condition and soil property data. Unlike the objective yield survey used by Pro Farmer and others, the Gro model automatically captures deviations in kernel fill and ear weight.

The Pro Farmer and Gro yield estimates showed some differences by geography, which could in part be explained by the different ways of accounting for ear weight. Compared with the Pro Farmer estimates, Gro holds a more negative outlook for yields in the eastern Corn Belt, including Illinois, Ohio, and Indiana, and a more optimistic outlook for Iowa, Minnesota, and Nebraska in the west. 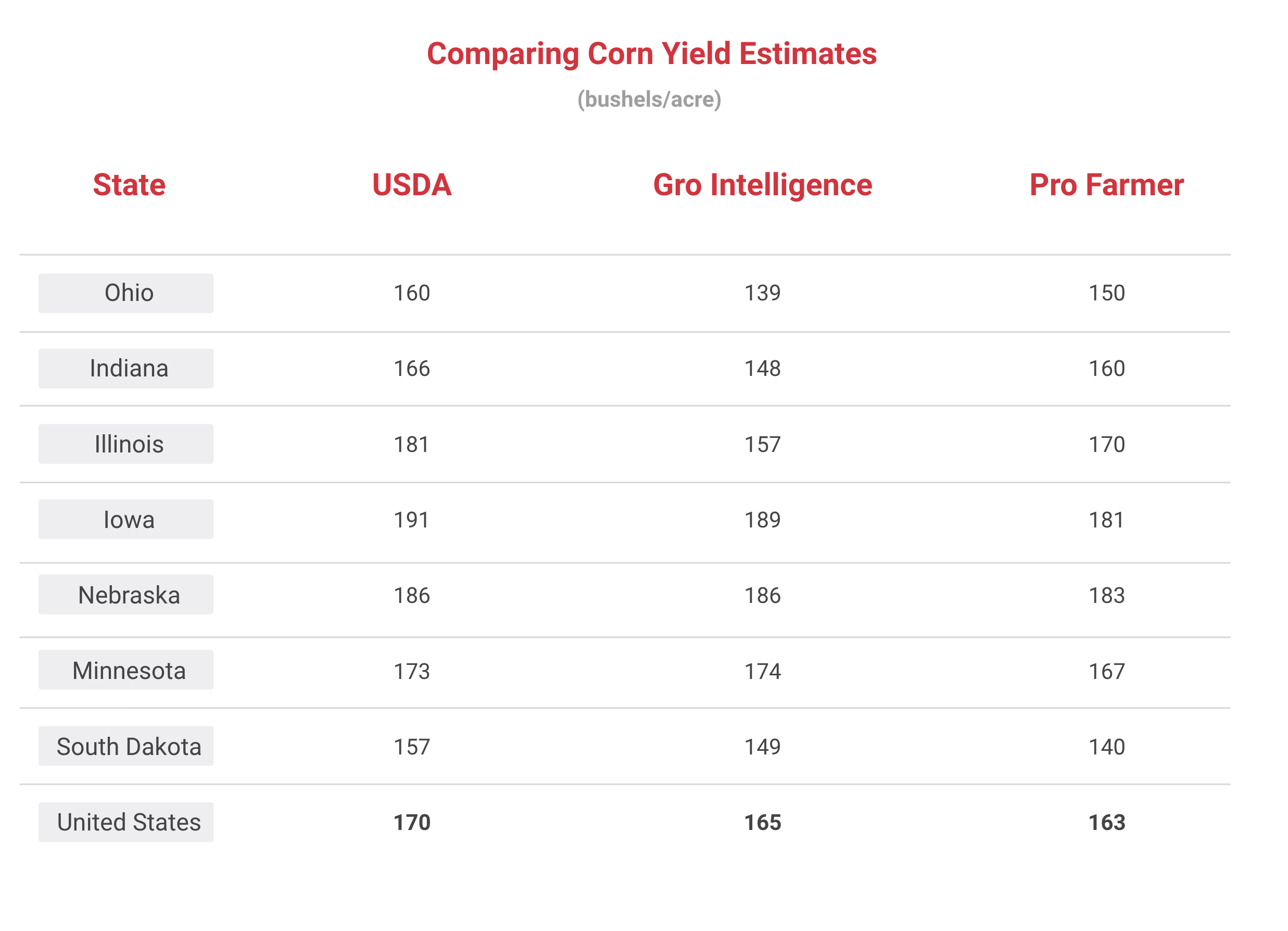 Ohio: Endless rains severely delayed planting in the eastern Corn Belt this spring, and plant development in Ohio is currently two weeks behind normal, according to the USDA’s weekly Crop Progress report. Immaturity was a strong theme of the Pro Farmer surveys in the state. That, coupled with weak plant population, depressed Pro Farmer’s Ohio yield estimate to 150 bushels per acre, or 14% below NASS’ three-year average. By comparison, Gro’s current estimate for Ohio is 139 bushels per acre. The USDA’s estimate is much higher at 160 bushels per acre.

The biggest difference between the Gro and Pro Farmer estimates for Ohio was in agricultural district 1 in the state’s northwest. Gro’s model points to an average county-level yield of 120 bushels per acre, which is 30% below the NASS three-year average for the district. By contrast, Pro Farmer forecast an average district yield that is 3% above the tour’s three-year average, as the length of grain on the ears offset a weak plant population count.

Indiana: Moving westward to Indiana, conditions were very similar. Crop development was delayed, and ear counts were light. But good soil moisture levels made Pro Farmer more optimistic about the crop’s potential. Pro Farmer estimates the state’s yield at 160 bushels per acre, or 11% below NASS’ three-year average. Gro’s estimate based on conditions up to now is even lower, at 148 bushels per acre. Both figures suggest the USDA’s estimate at 166 bushels per acre is too high.

Pro Farmer’s survey showed the greatest yield weakness in agricultural districts 4, 5, and 6 in the center of the state, the same areas where Gro predicts the biggest yield declines. However, Gro’s yield decline estimates are of an even greater magnitude, and the difference between the two can likely be explained by light ear weights. The biggest difference in estimates for Indiana was in agricultural district 3 in the state’s northeast, where average grain length propped up Pro Farmer’s forecast. But Gro’s model shows particular weakness in the northern part of that district, an area that may not have been well sampled on the Pro Farmer crop tour.

Illinois: Pro Farmer yield surveys saw their largest declines in Illinois, resulting mainly from unimpressive grain length. Estimates were fairly consistent, with nearly every district in the state having a similar percentage decline from the tour’s three-year average. Gro’s estimated declines in yield also are fairly consistent across the state. But, as in the rest of the eastern Corn Belt, Gro’s model points to greater declines than does Pro Farmer. 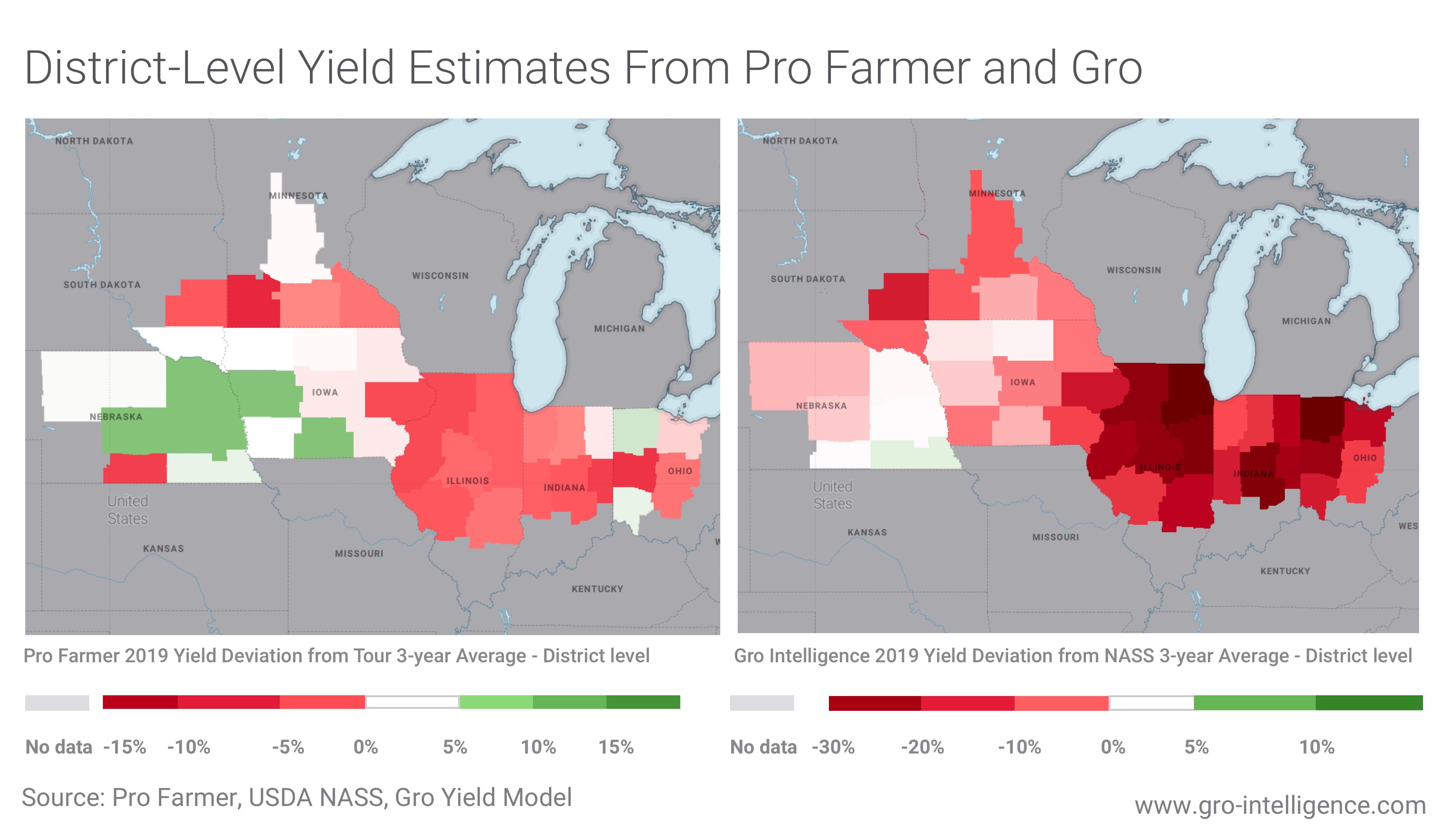 The charts above compare district-level yield estimates. The chart on the left shows how much Pro Farmer’s current calculations differ from the tour’s three-year average. On the right, the chart shows the differences between Gro’s current yield estimates and the three-year NASS district yields.

Iowa: Moving into the western Corn Belt, yield estimates improve significantly. Gro’s model estimates a yield of 189 bushels per acre in Iowa. That’s only slightly below the USDA’s projection of 191 bushels per acre. Similarly, Pro Farmer’s survey data was only modestly weaker in the state, but due to crop inconsistency, they estimate production will fall 10% below the NASS three-year average, at 181 bushels per acre.

A district-level comparison shows that both the Pro Farmer surveys and the Gro yield model find the largest yield declines in agricultural district 6 in the state’s center-east region bordering Illinois. There, Pro Farmer calculated a yield decline of 3% from their three-year tour average, with declines in both plant population and ear size. Gro estimates a 17% decline from the NASS three-year average in the district.

Nebraska: In Nebraska, yield estimates from Pro Farmer, Gro, and the USDA are all right in line with one another, perhaps due to the large number of irrigated acres in the state. The largest district-level difference between Pro Farmer’s survey data and Gro’s yield model came in district 8, where ProFarmer only captured 17 samples. Gro’s estimate calls for a district-level yield right in line with the NASS three-year average, while Pro Farmer’s data for the district points to a 12% decline.

Minnesota: Minnesota stands out as the only state where Gro’s yield estimate is higher than the USDA’s current projection, with Gro at 174 bushels per acre compared to the USDA’s 173 bushels per acre. Pro Farmer is less optimistic, at 167 bushels per acre, after seeing poor conditions and delayed maturity. The crop tour data showed an 8% decline in average ear counts in the state. The tour’s most heavily sampled areas—districts 7, 8, and 9 in the south of the state, bordering Iowa—saw calculated yield declines right in line with Gro’s yield model declines. That similarity may be linked to better crop maturity than in the eastern parts of the Corn Belt, since plant development in Minnesota is one week behind normal, according to the weekly USDA Crop Progress report.

With just one month remaining before harvest in the US Midwest typically ramps up, corn crops in the eastern Corn Belt are still two weeks behind their normal maturity level. An analysis of Gro’s machine-learning yield model and Pro Farmer’s on-the-ground surveys indicates there is significant risk that plants may be unable to meet their full potential. Current temperatures in the midwestern states are running 5 to 10 degrees Fahrenheit below normal, and forecasts indicate the unseasonably cool conditions will continue. The weak temperatures, coupled with shortening hours of daylight, can inhibit crops’ ability to reach optimal grain fill even if the growing season is extended because of a late frost. If temperatures improve and adequate soil moisture is available, there’s room for Gro’s real-time yield estimates to improve. But our model currently estimates yield declines in excess of 20% in the eastern Corn Belt and a national yield of 165 bushels per acre, down from 176.4 bushels per acre last year.

Gro will be jointly hosting a webinar with DTN on Sept. 9 to discuss the findings of the Gro Corn and Soybean Yield Models, which were featured prominently in the DTN 2019 Digital Crop Tour from Aug. 12-19. Interested participants can register here. Additional information about the DTN digital crop tour can be found here. 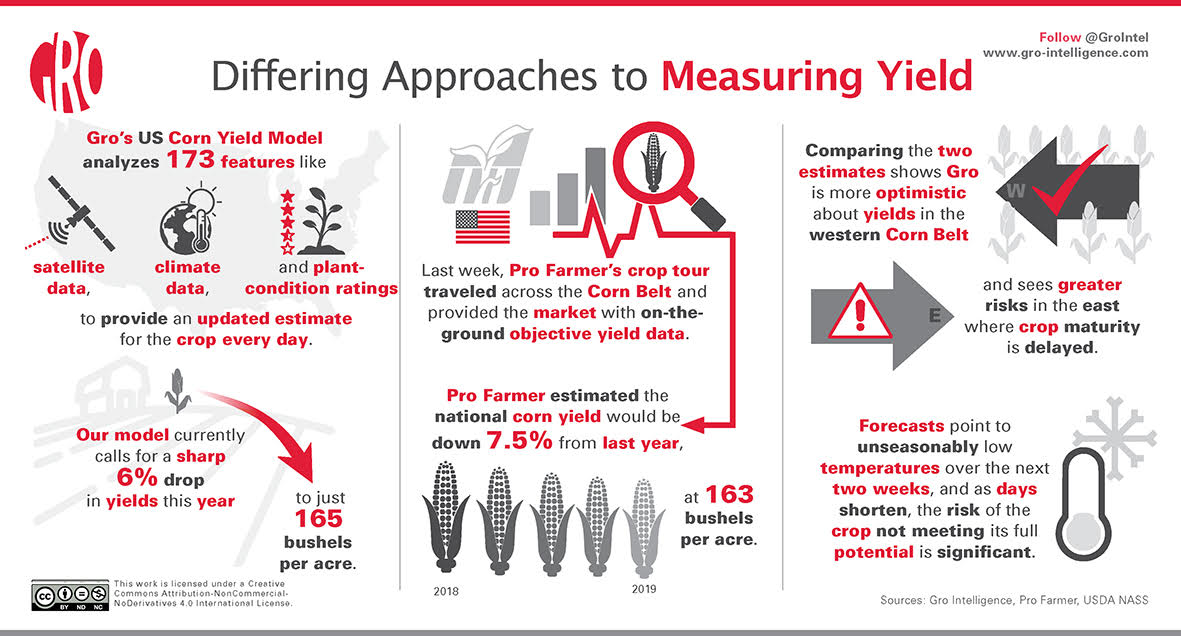 Decrease in US Hog Herd Could Support Prices in Coming Months

Argentina Strike Hits Soymeal Exports, Could Funnel Business to US