Ukraine’s Grain Association President Nikolay Gorbachov stood in front of an audience at the Australian Grains Industry conference in Melbourne last month, beaming with pride over the remarkable success story of his country’s wheat production. In the past decade, Ukraine’s wheat output has nearly doubled, and is estimated to reach 25.5 million tonnes this year.

Now, Ukraine, endowed with rich, fertile soil on the edge of the Black Sea, wants to emulate its achievement with wheat in other crops. Corn production already has risen dramatically. And the country is setting the groundwork for a major expansion in oilseeds, especially sunflowers, rapeseed, and soybeans. While export tariffs currently keep a lid on oilseed sales to other countries, Ukraine can be expected to become a major global player in these commodities if and when the tariffs are gradually reduced in coming years. 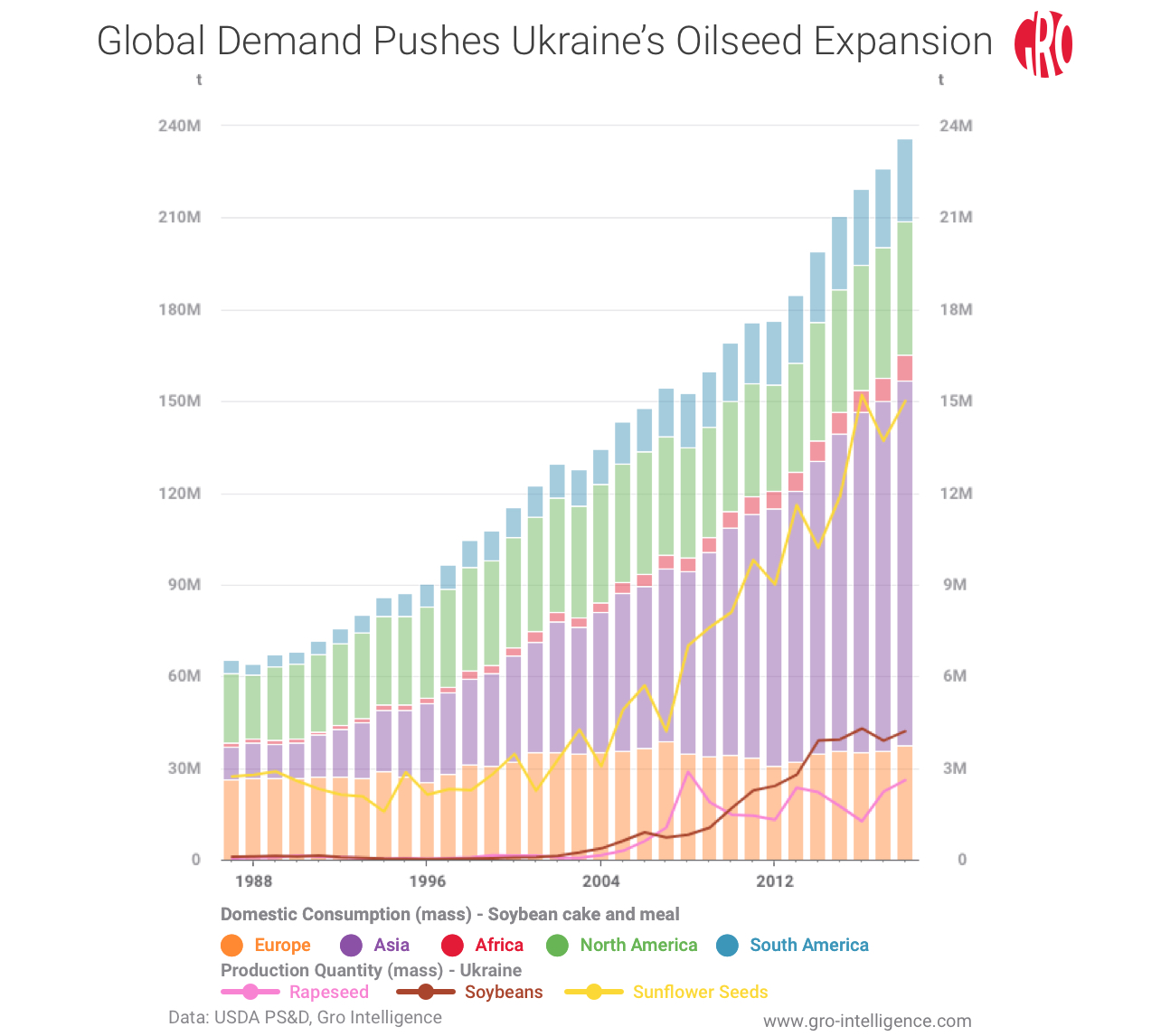 Oilseeds are the most profitable of all of Ukraine’s crops, according to the State Statistics Service of Ukraine, or UKRSTAT. That’s partly because new processing facilities that have been built, and which are capable of handling all three types of oilseed, compete with each other to secure feedstocks. Recent processing plant additions are estimated to boost capacity to 18.4 million tonnes, up from 18.1 million at the start of this year, according to UKRSTAT.

After a prolonged slump, Ukraine’s currency, the hryvnia, has stabilized in recent years, as has the country’s overall economy. That has given a boost to imports of agricultural chemicals, which in turn has helped to increase crop yields. In 2017, imports of insecticides, herbicides, and pesticides each more than doubled from the previous year. The greatest yield gains have been for rapeseed, which rose 52 percent to 2.59 tonnes per hectare in 2015 from 1.7 tonnes per hectare in 2010. Yields have also increased for soybeans and sunflowers, but to a lesser degree. Yields for soybeans in 2017 were 1.97 tonnes per hectare, and 2.02 tonnes per hectare sunflowers according to UKRSTAT. Gro’s crop-weighted evapotranspiration for the 2018/19 marketing years suggest that yields might have been relatively low if they hadn’t rebounded since June 2018. 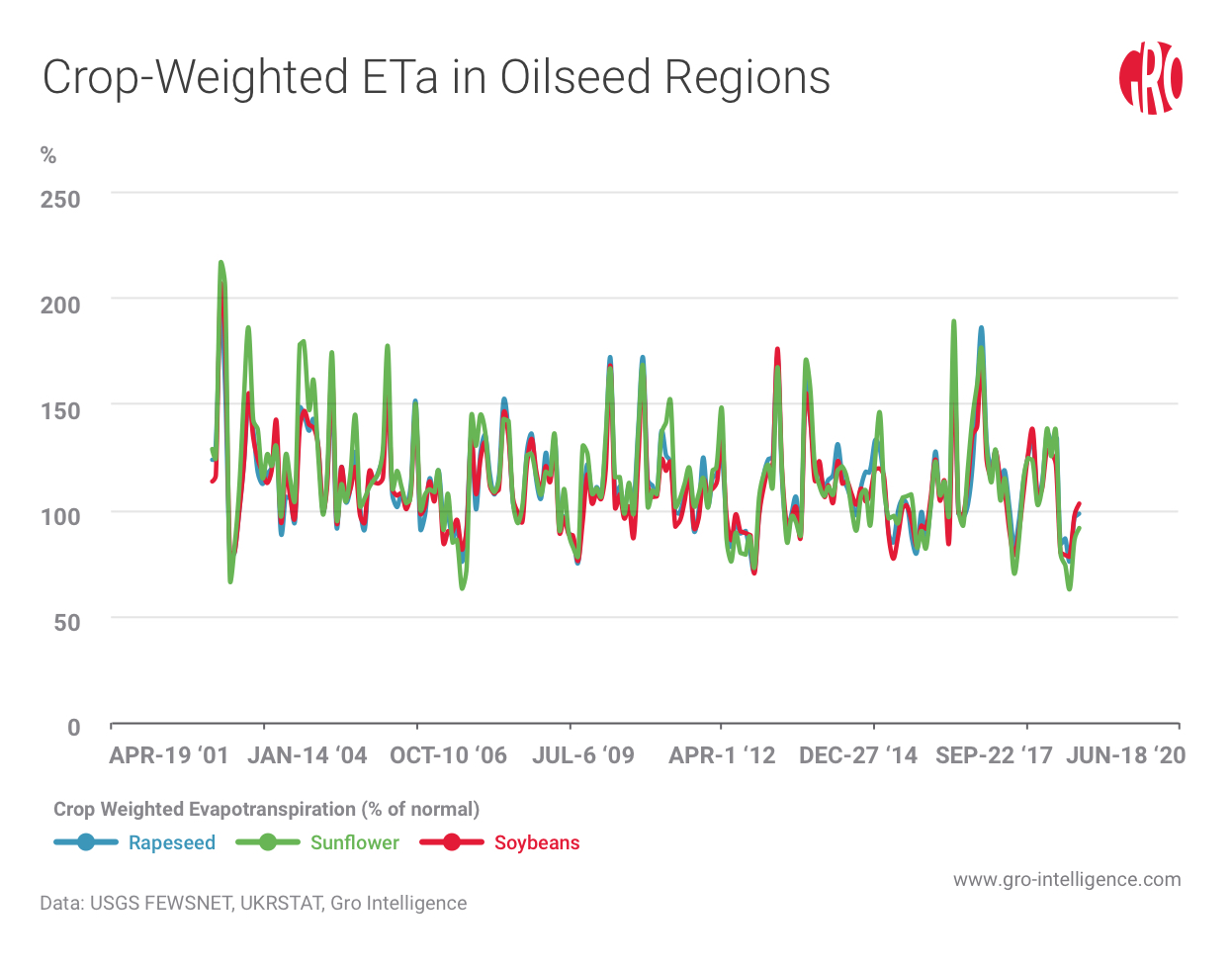 The above chart shows evapotranspiration as a percent of normal weighted against the subnational UKRSTAT data for rapeseed, sunflower, and soybeans. A drop in the percent for evapotranspiration which measures water loss through soil evaporation and plant transpiration, indicates growing conditions are deteriorating.

Although it is illegal to use genetically modified seeds in Ukraine, it is believed that some small and mid-size farmers surreptitiously use these products, which might also be contributing to yield gains.

Ukraine is a limited exporter of oilseeds because of a longstanding policy to impose export tariffs. Compared with estimated EU exports of 4.05 million tonnes of soybeans in 2018, Ukraine is expected to export 2.95 million tonnes, most of which goes to the EU. Going forward, soybean exports from Ukraine will likely decrease as a result of the recent cancellation of a subsidy to soybean producers, in the form of a VAT refund, which had helped to offset the export tariffs. Cancellation of the refund was largely done to turbocharge oilseed processing in the country, an agricultural protectionist measure.

The expanding livestock sector has expedited the growth of Ukraine’s oilseed market since 2000. Chicken production over the past decade (2008-2018) has increased by 82.5 percent. Pork production has increased by 8 percent over the same period. The new-found domestic demand for high-protein oil meals mirrors a surge in global demand. Furthermore, the rapid ramp up of oilseeds in Ukraine was expedited by major agronomic advances and processing expertise in the early 2000s. 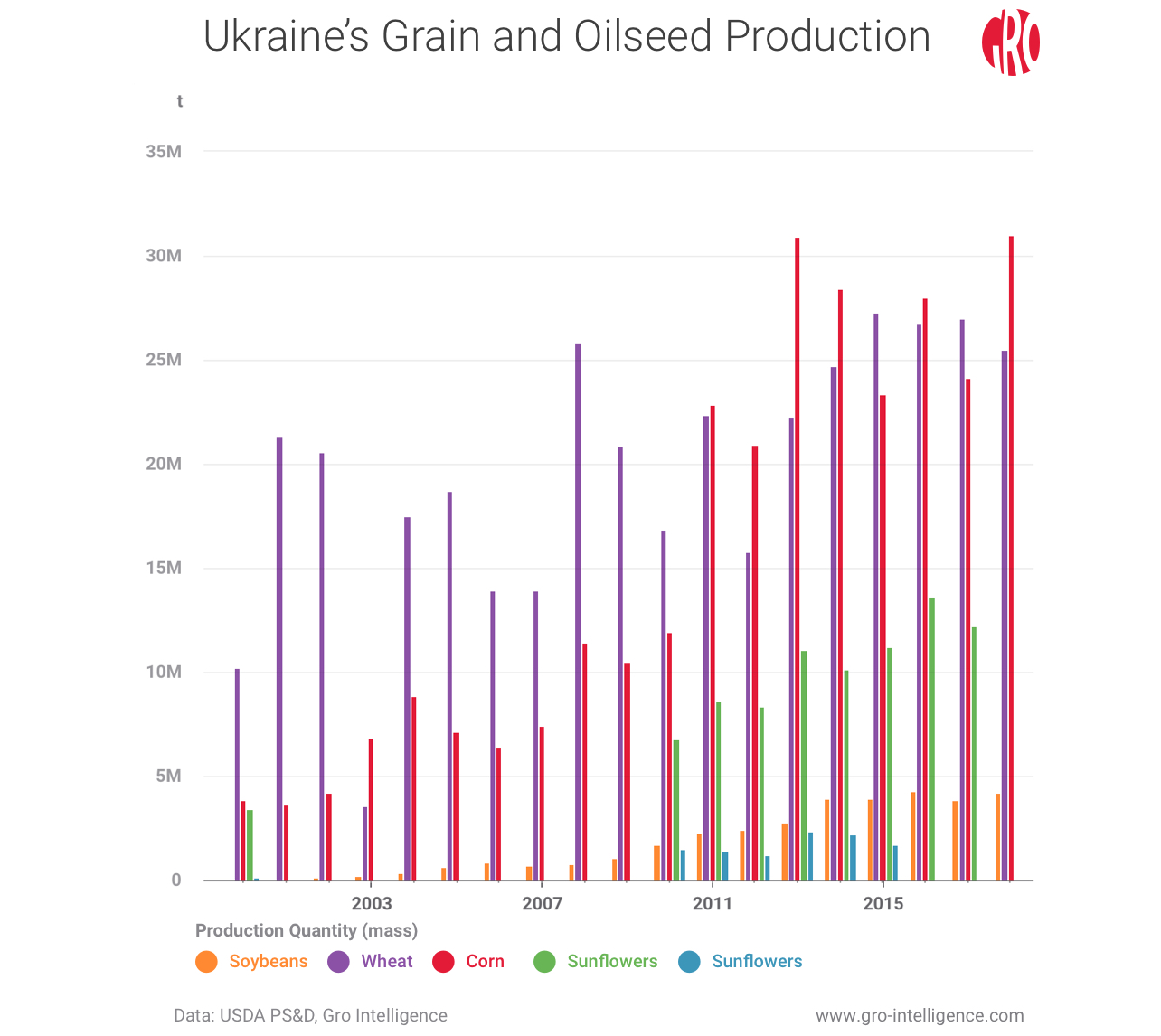 Ukraine’s wheat and corn crops have boomed. Production of oilseeds, including sunflowers, rapeseed, and soybeans, has begun rising sharply.

Several years ago, the government floated the idea of eliminating the export tariffs that have spurred expansion of domestic oilseed-processing facilities. If the government moves forward with that policy reversal, it could drastically shift the ratio of volume exported to volume domestically processed. Once the terms of the Deep and Comprehensive Trade Agreement, a free-trade pact between the EU and Ukraine, are met, Ukraine would have to reduce its export duty to zero by 2027 for oilseeds.

To replenish soil moisture levels in the often drought-stricken southeast part of Ukraine, farmers are required to follow minimum crop-rotation guidelines. For rapeseed farmers, 3 to 10 percent of total area must be set aside for crop rotation, and for sunflower seeds, it’s 5 to 15 percent.

Following are more details about the three principal oilseed crops:

In 2017, 6 million hectares of sunflower were planted, reaping 12.2 million tonnes, a 9 percent drop from 2016, according to UKRSTAT. Sunflower production, the most profitable of Ukraine’s oilseeds, is often used to buffer the impact of high winterkill rates of crops such as rapeseed. Between 2015 and 2017, planted area for sunflower seeds increased by 19.6 percent.

Rapeseed production was 2.2 million tonnes in 2017, a 90 percent increase from the previous year. For the most recent winter, farmers were expected to plant 1.01 million hectares of winter rapeseed, up 12 percent from the previous year. Because of favorable weather during autumn and winter of this year, low winterkill rates are expected for rapeseed plantings. Winterkills are common for rapeseed as the crop requires soil temperatures of approximately 50 degrees Fahrenheit for seeds to emerge. The rapeseed crush in Ukraine is forecast at 195,000 tonnes, a 30 percent increase from 2017/18. 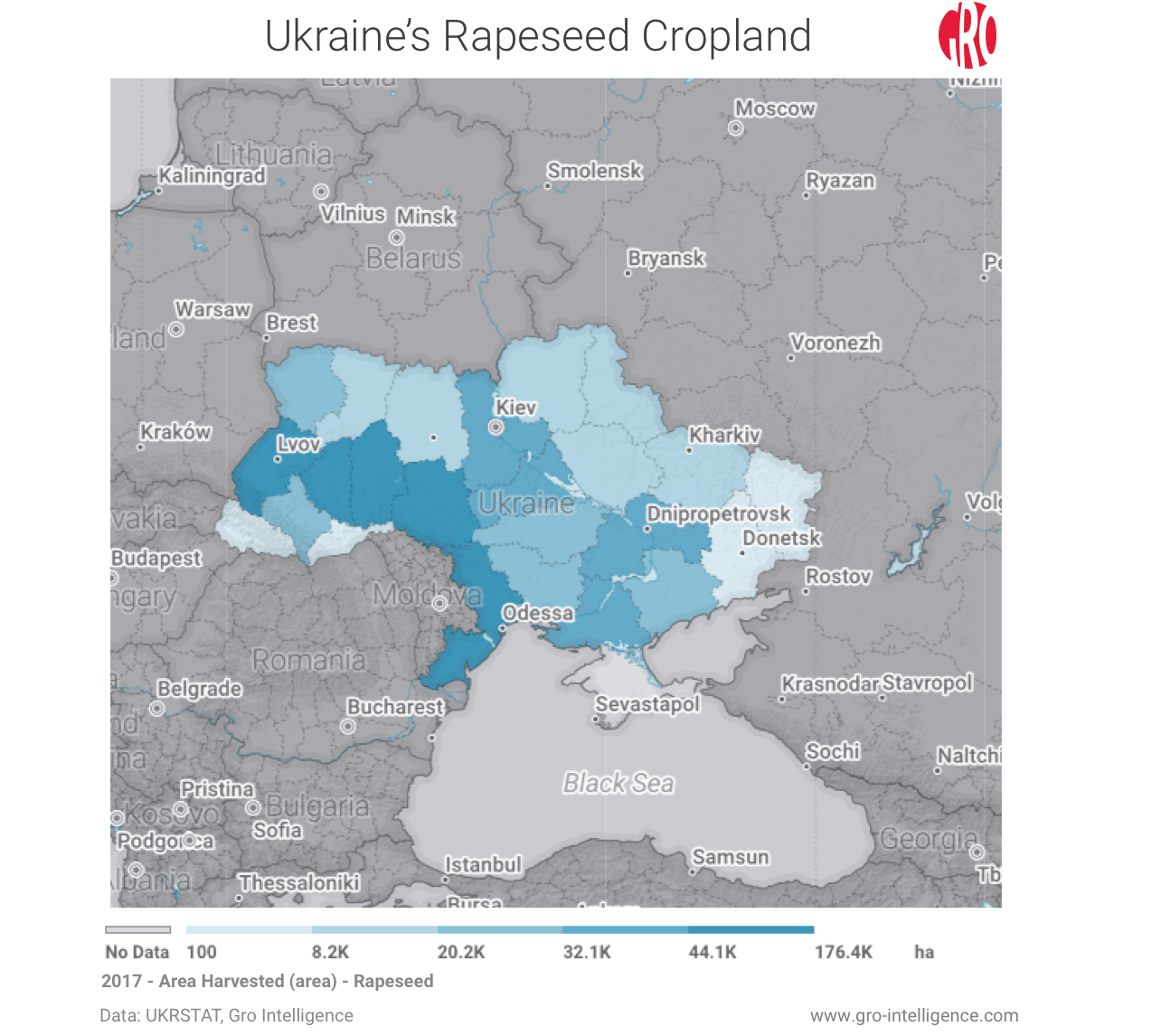 As rapeseed production expands across Ukraine, sub-national analysis of cropland coverage helps to monitor growth in this oilseed.

Soybean production is set to be 3.9 million tonnes for the 2018/19 marketing year. This is a 9 percent decrease from the previous marketing year. Soybeans have multiple sales channels in Ukraine as they can be sold raw, or for meal or oil. Soybean meal accounts for 80 percent of the output from processing facilities. Partly owing to the canceled VAT-refund subsidy for soybean exports, soybean planted area in 2018/19 is projected to decrease from 2017/2018 by 23 percent to 1.5 million hectares.

While Ukraine’s wheat production roars on, oilseeds are also on the rise and the country’s production of these commodities demands attention globally. Agriculture comprises a whopping 12 percent share of Ukraine’s GDP, compared with less than 3 percent in the EU-27 economy. For that reason, Ukrainian oilseeds are likely to be front of mind in the next wave of agricultural success stories coming out of the Black Sea region. Gro Intelligence provides data and analytics that can help users monitor subnational changes in Ukrainian oilseed production and demand. 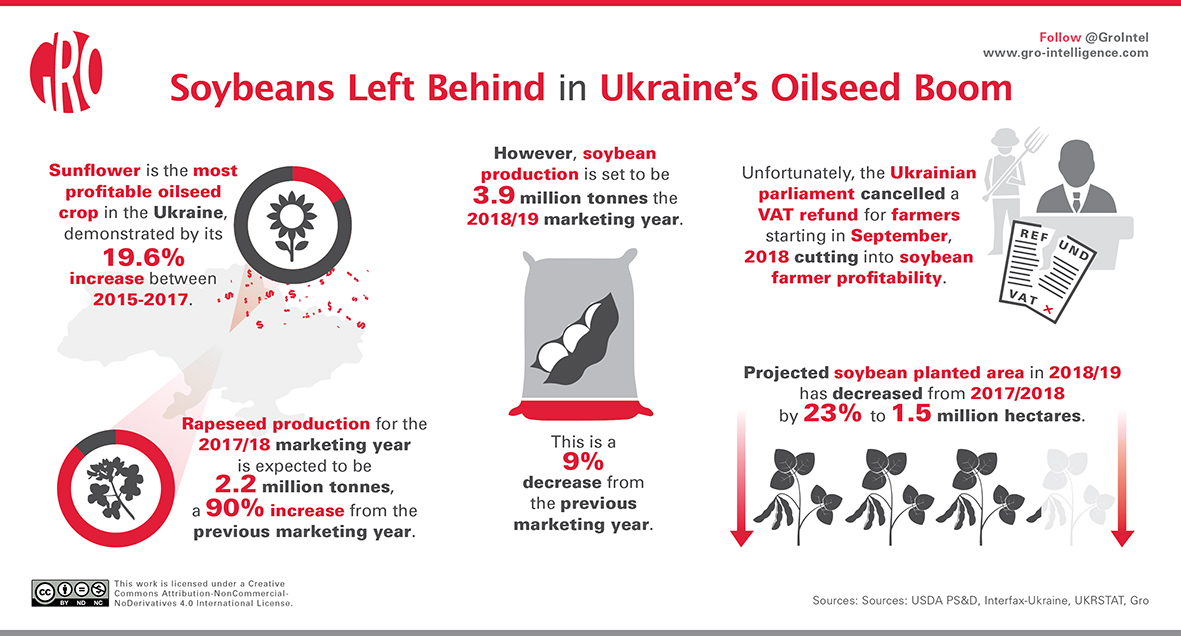