In the United States (US), cotton was deemed so central to the American identity that the crop played a key role in the American Civil War. First introduced in Florida in 1556, it quickly spread throughout the colonies. Over the following 300 years, cotton production eventually became ubiquitous in the American south. But fast forwarding to the present day, cotton production across the globe has caught up with landmark US innovations in cotton harvesting and ginning. As production expands across countries like China, India, Pakistan, and Brazil, the aging US cotton industry is increasingly forced to choose between slowly losing preeminence or innovating. However, critics of the industry argue that it has unfairly chosen a third option—government protection in the form of massive subsidies and price supports.

Technological advances in cotton production contributed to early yield increases during the mid-twentieth century. In 1949, mechanization was still in its infancy with less than one third of cotton farms using tractors. Mechanical harvesting of cotton rapidly ramped up in the 1950s, with half of the production of US cotton harvested mechanically by 1960. By 1970, almost all cotton in the US was harvested mechanically, mitigating high labor costs and widespread farm labor shortages.

The need for innovation was due to an outbreak of disease that hit the Texas High Plains and the Mississippi Delta between 1974 and 1978. During this period, yields fell by an average of 4.8 percent per year. Yields began to rebound in the 1980s as farmers employed better agricultural practices such as shorter season production systems, improved pest management, and suspension of production on marginal lands.

Today, cotton is produced in 17 states across the southern US. The largest growing areas are in the High Plains of Texas, the Mississippi Delta, and the Piedmont region of the southeast. Total harvested area of cotton has increased from 8.08 million acres in 2015 to 11.01 million acres in 2017. Yields have also increased to 0.45 tonnes per acre in 2017, up from 0.34 tonnes per acre in 1997. But as China and India begin unloading massive volumes of cotton into the global marketplace, critics argue that the US cotton subsidy framework allows producers to escape free market pressures, keeping production and farmer revenue artificially high. 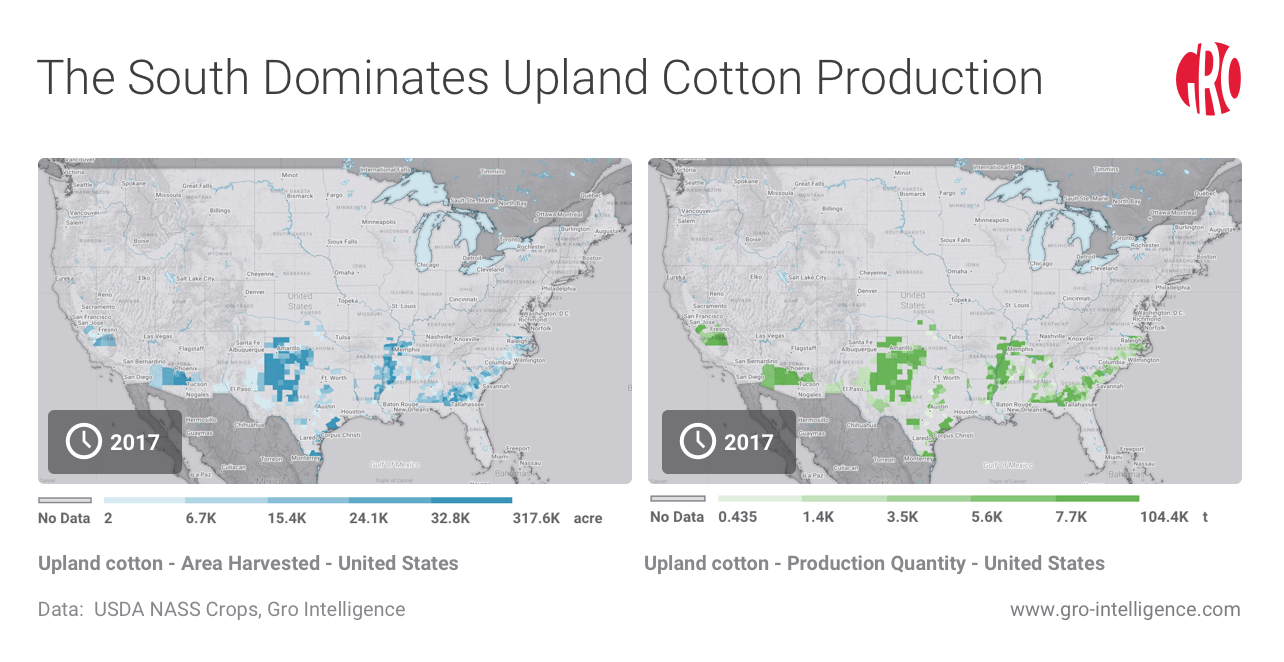 US government support for the cotton industry has been a source of controversy. Since 1995, producers have benefited from a host of subsidies averaging $2.1 billion annually. On average, these subsidies amount for 50 percent of the actual value of the crop. 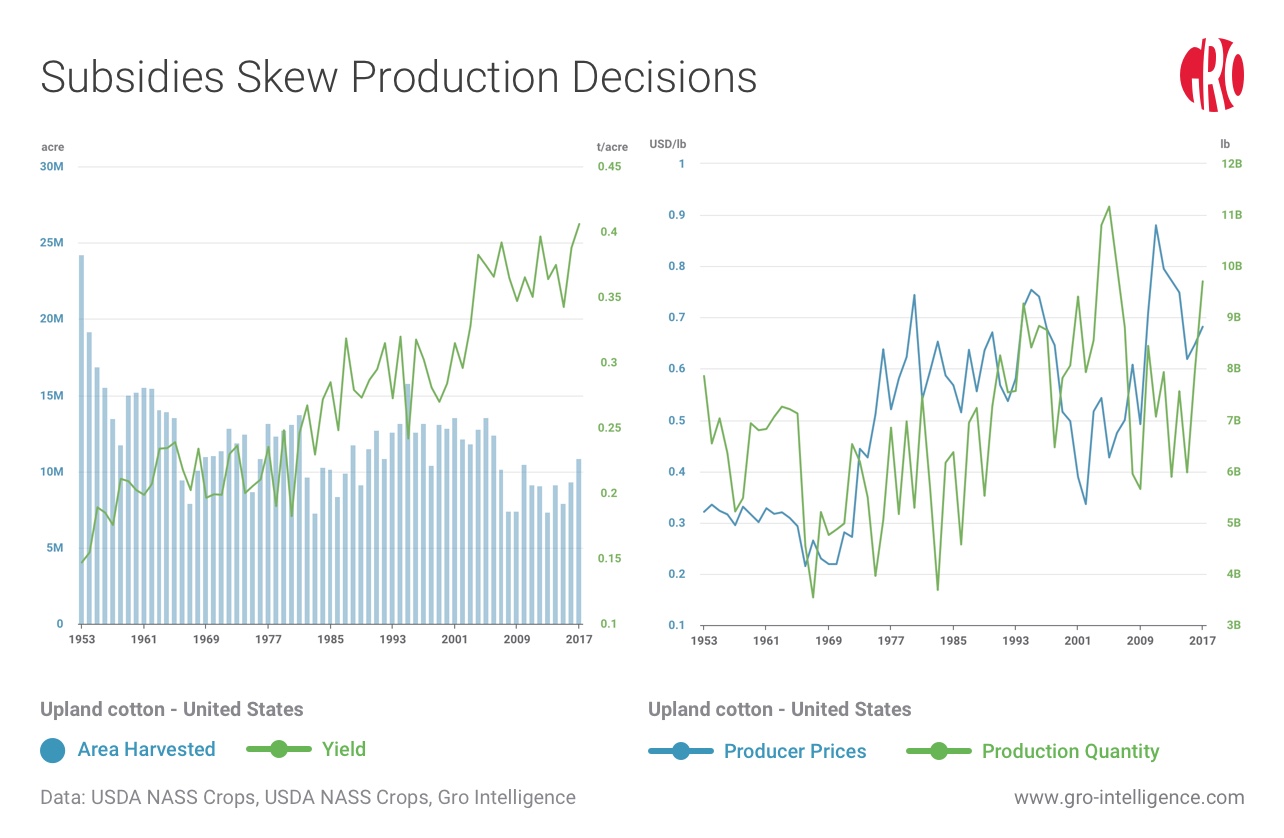 Countercyclical payments for cotton were established under the Direct and Counter-Cyclical Payment Program (DCP) approved with the passing of the 2002 Farm Bill. These payments are made to producers when the marketing year average price is less than the set target price for cotton. The payments are made on a per acre basis, and are determined by multiplying the difference between the annual target price and that marketing year’s average price. Because this form of government support is dependent on global market prices, payouts to producers vary annually. Before the DCP and during a period of high cotton prices in the mid-1990s, just $1 billion total were paid out to producers. After a price drop in the mid-2000s and heavy producer participation in the DCP, the total subsidy payment tripled to over $3.7 billion in 2005.

In addition to countercyclical payments, US cotton producers benefit from the federal crop insurance program. Between 2009 and 2018, the average per acre cotton subsidy doubled. Between 1995 and 2016, cotton indemnity subsidies, or those paid out to protect crop loss, averaged $365 million annually. In fact, both the average per acre cotton subsidy value and subsidy percentage of the cost of production have been larger than most competing row crops including peanuts, corn, and sorghum. 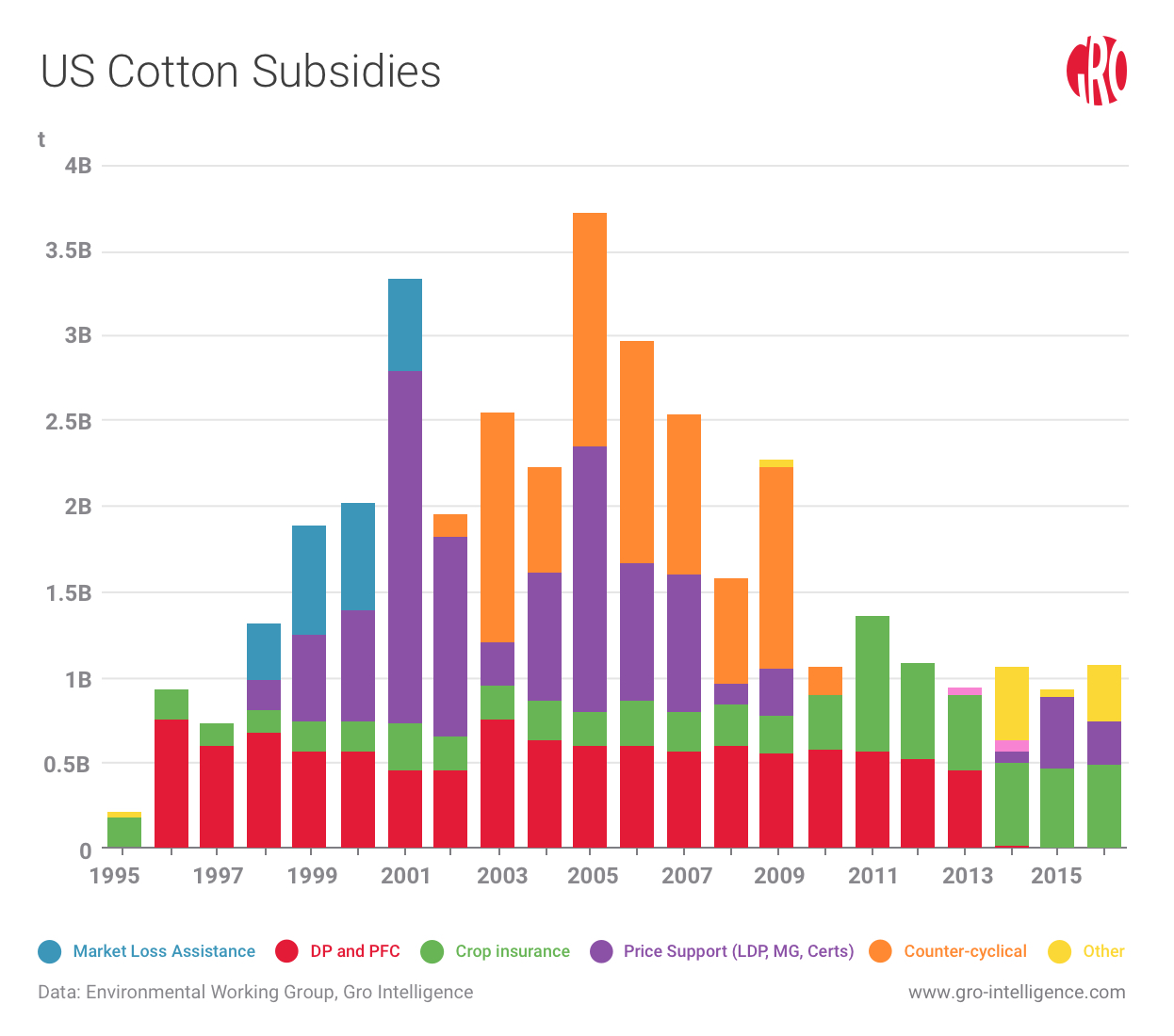 Several factors led to a drop in cotton prices in the late 1990s and early 2000s. During this period, the Asian financial crisis greatly reduced global demand for textiles. As a result, US cotton exports fell from 2.05 million tonnes in 1994 to 0.9 million tonnes in 1998. That combined with the strong US dollar, record high global cotton production, and a flood of Chinese reserve cotton into the market dragged the price of the crop to as low as $0.28 per pound in October 2001. These factors elicited massive US federal government spending in the form of subsidies. Total US support for cotton producers rose to $3.3 billion in 2001, up from $0.21 billion in 1995.

Brazil is the fifth largest producer of cotton worldwide with an expected production of 1.89 million tonnes in 2018. In 2002, Brazil filed a formal dispute settlement case against the US at the World Trade Organization (WTO) claiming that the US’s cotton subsidy structure lowers the world market price for cotton. The dispute cited that between 1995 and 2002 the US export market share nearly doubled—a near impossibility without price-contingent subsidies. Step 2 payments, established in the 1996 Farm Bill, created a certificate system rewarding exporters and domestic purchasers of upland cotton that explicitly favored US production over foreign product. While the WTO found that direct payments to producers and crop insurance payments were not price-contingent, the organization did recommend that the Step 2 payments be abolished. The US compiled by abolishing Step 2 payments in 2005, yet Brazil argued that this measure was insufficient. The WTO ultimately ruled in Brazil’s favor in 2009 when it permitted Brazil to charge countermeasures fees against the US amounting to $147.3 million annually. 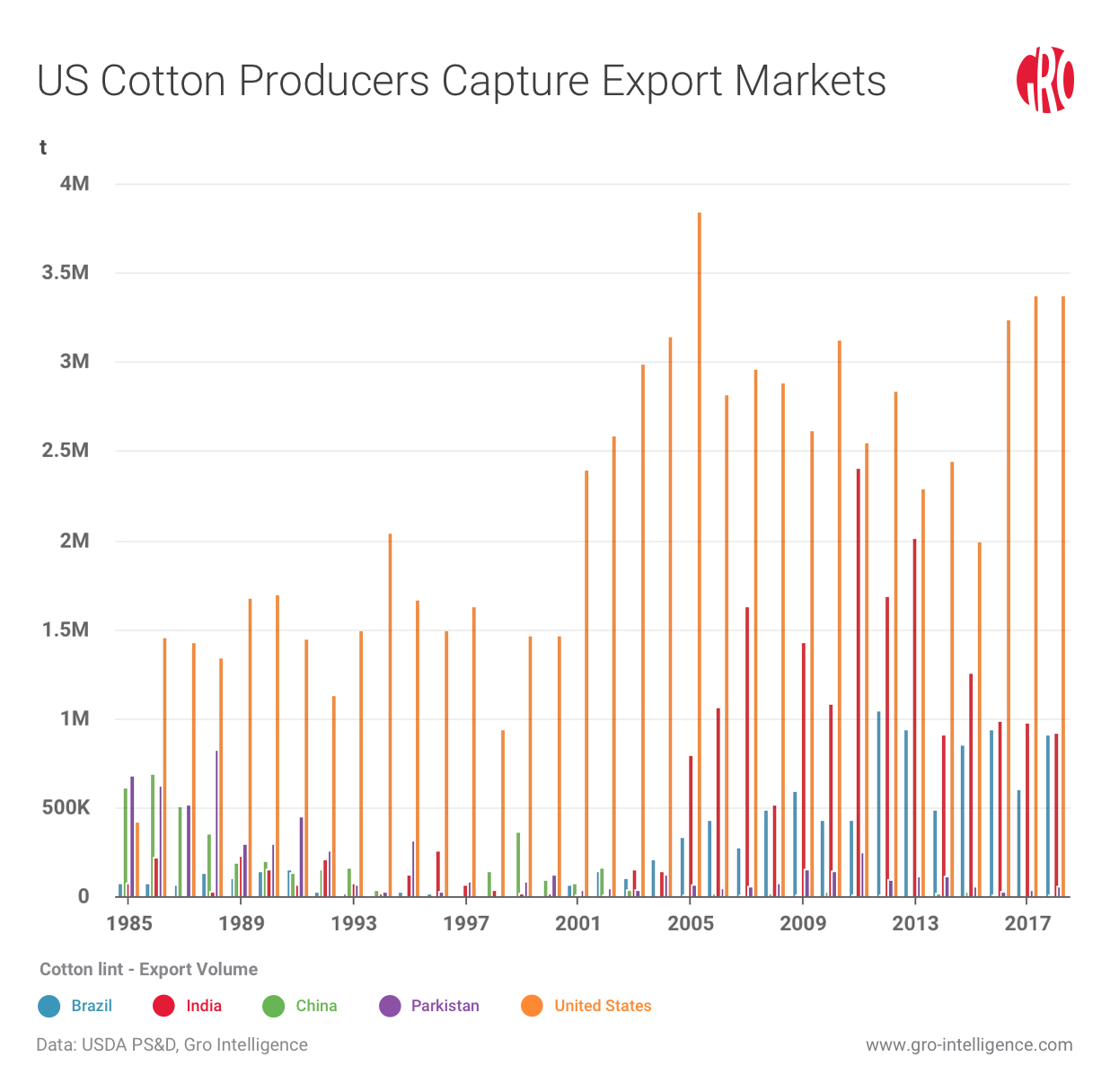 Due to international pressure and rising subsidy payouts, the 2014 Farm Bill eliminated the direct and countercyclical payments for upland cotton. These protections were replaced by the creation of the Stacked Income Protection Plan, otherwise known as the STAX program. This program provides coverage for a percentage of the expected area revenue for upland cotton. This farm bill also changed the way cotton marketing loans were calculated. It based the loan rate on the average adjusted world price over the two previous years, providing subsidy premiums ranging from $0.45 to $0.52 per pound of cotton.

Under the STAX program, US upland cotton farmers are provided protection against a loss of revenue on a per-acre basis. In 2014, the Congressional Budget Office estimated that the annual federal expenditure for the STAX program would be approximately $330 million.

Recent cotton prices have risen due to drought in northern Texas, but they will not likely have a lasting impact on the outlook for US cotton. In 1995, US government support for cotton producers amounted to less than $0.2 billion only to balloon to $3.7 billion in 2005. In 2017, total US government subsidies settled to $1.1 billion paid out through a patchwork of programs that allows cotton producers to dodge free market pressures. Subsidizing agricultural industries can be a powerful tool in propping up domestic markets that are crucial to economic development. Clearly, this is not the case for cotton in the US. American taxpayers who shoulder the financial burden of supporting cotton farmers must decide whether they believe that continued subsidy is in their interest.

Decrease in US Hog Herd Could Support Prices in Coming Months

Argentina Strike Hits Soymeal Exports, Could Funnel Business to US