US Gets Hooked on Vietnamese Catfish

In 1987, US President Ronald Reagan officially proclaimed June 25th to be “National Catfish Day,” lauding burgeoning US aquaculture industry as a means of creating “stable income for growers and an economical food product for consumers.” Fast forward three decades, and it looks like President Reagan’s prediction came true—but not for the US. Due to greater catfish imports from Vietnam, the United States’ farm-raised catfish industry has quickly begun to decline. Since the two former combatants resumed formal trade relations in December 2001, US catfish production has dropped by over half while imports from Vietnam have increased roughly tenfold.

Unsurprisingly, the contraction of what was once the United States’ largest aquaculture industry has not come without protest. In the past 15 years, both the American and Vietnamese catfish industries have lobbed a series of complaints and lawsuits against each other, ranging from disputes on food labeling and dumping to concerns over quality control, some of which have reached the World Trade Organization.

These trade issues have become especially salient during negotiations of the Trans-Pacific Partnership (TPP) trade agreement. The treaty—of which both the United States and Vietnam are signatories—would effectively eliminate the current barriers to the catfish trade between two countries. Passage of the TPP is uncertain, but even if it fails, the prospects for US catfish producers remain murky.

Background: US and Vietnamese catfish production

The most common species of American catfish is the channel catfish (or Ictalurus punctatus) and it has played an impressive role in the history of American cuisine, particularly in the South. Especially in areas far from the sea, such as Appalachia and parts of the Mississippi Delta, channel catfish have thrived in brackish ponds and streams, consuming most forms of biomass and providing Southerners with an affordable form of protein.

Catfish, a member of the Siluriformes family, is fairly ubiquitous, and many other countries revere it as a vital source of protein. Halfway across the globe, numerous species of catfish have also thrived in Vietnamese culture. In the ecologically-similar Mekong Delta of southern Vietnam, various species of catfish, especially shark catfish of the family Pangasius, have long supported the dietary needs of local populations.

Yet it was only after 1986, when Vietnam’s Sixth National Congress enacted a series historic economic reforms, that both countries’ catfish would be exposed to and compete within global markets. Known as Doi Moi, these reforms combined government planning with free-market incentives to propel the country towards global economic, agricultural, and aquacultural significance. Vietnam’s economy has largely continued to liberalize. Especially after Vietnam made notable efforts to resolve cases of unaccounted American soldiers, withdraw its forces from neighboring Cambodia, and resolve lingering emigration issues, the global community—led by the United States—embraced the former pariah.

These efforts first paid dividends for the relations between the two former combatants in 1994, when President Bill Clinton ended the US trade embargo. The following year, President Clinton ended a twenty year hiatus and reestablished diplomatic relations for the first time since the war. Vietnam’s desire for global economic integration did not end there; in 2001 it restored full economic relations with the US in a bilateral trade agreement; in 2007 it joined the WTO; and in 2008 was one of the first eight countries to begin formal negotiations of the TPP, a trade deal that stands to encompass 40 percent of the world’s GDP.

American producers respond: This pond ain’t big enough for the both of us

Given that catfish production is concentrated in a few states, American catfish producers have experienced considerable success in lobbying efforts. In response to a tenfold increase in imports, American catfish producers filed antidumping petitions with the Department of Commerce and the US International Trade Commission. In addition, they’ve lobbied for the name “catfish” to be reserved to fish of the family Ictaluridae—all of which are native only to North America, such as channel catfish. Catfish within the family Pangasius, which is the species more common in Vietnam, would thereafter be required to be sold as Basa or Swai fish and would need to be explicitly labeled as a product of Vietnam. However, the success of both lobbying efforts did little to stem the flow of Vietnamese catfish into the United States.

Furthermore, the US catfish industry successfully campaigned for the 2008 Farm Bill to require imported catfish to be inspected by the USDA. That move would require the government to inspect every container of catfish imports, compared to the 2 percent of imports inspected by the Food and Drug Administration. Along with other measures, the move has been criticized as thinly-veiled protectionist policy. Although it won’t be fully effective until March of 2017, the legislation has already been identified as a possible threat to global trade, both due to the likelihood of other countries imposing similarly restrictive inspections, as well as it being a possible infraction of both WTO and TPP procedure.

Total US catfish production has continued to decline

In spite of the controversial measures, exports of Vietnamese catfish, or basa fish, have continued to claw away at US market share. In 2009, basa joined the ranks of the ten most consumed seafoods per capita. Within five years, basa fish was the sixth most consumed form of seafood per capita in the United States. Notably, in the same period, catfish have fallen from sixth to eighth, which suggests that Ictaluridae and Pangasius are largely substitutable.

Although it took six years for the USDA to establish and implement the inspection guidelines mandated by the 2008 Farm Bill—and it will take until September 2017 for these guidelines to be phased in completely—concerns from US catfish farmers and food safety advocates have already been in part justified. Within the few months that the USDA has been responsible for inspection of imported catfish, the department’s Food Safety Inspection Service (FSIS) has already denied entry on two shipments of Vietnamese catfish for trace amounts of Malachite Green and Crystal Violet, both of which are carcinogens.

Regardless, critics of the added safety inspections continue to highlight the outsized attention that catfish has been receiving; after all, Americans consume only about 0.7 pounds of basa and swai per year—significantly less than most other forms of meat. (For perspective, Americans eat an average of 90 pounds of chicken a year.) Shrimp, which at 4.0 pounds annually per person is the most consumed seafood in the US, is inspected by the FDA, like every other type of seafood besides basa fish. Yet there have been few calls for greater USDA inspection, in spite of the fact that 90 percent of shrimp consumed in the US has been imported, compared to roughly 60 percent of catfish.

How much these safety revelations or USDA inspections will affect demand remains unclear. The heavier inspections, which started in March, and rejected shipments, which took place in June, have so far done little to slow the tide of imports. In July 2016, the US imported 10.6 million kilograms of catfish fillets from Vietnam, well above the 2015’s monthly average of 9 million kilograms. The Vietnamese industry has also continued to prove its determination to access the US market by creating programs intended to raise the quality and safety standards of its catfish. 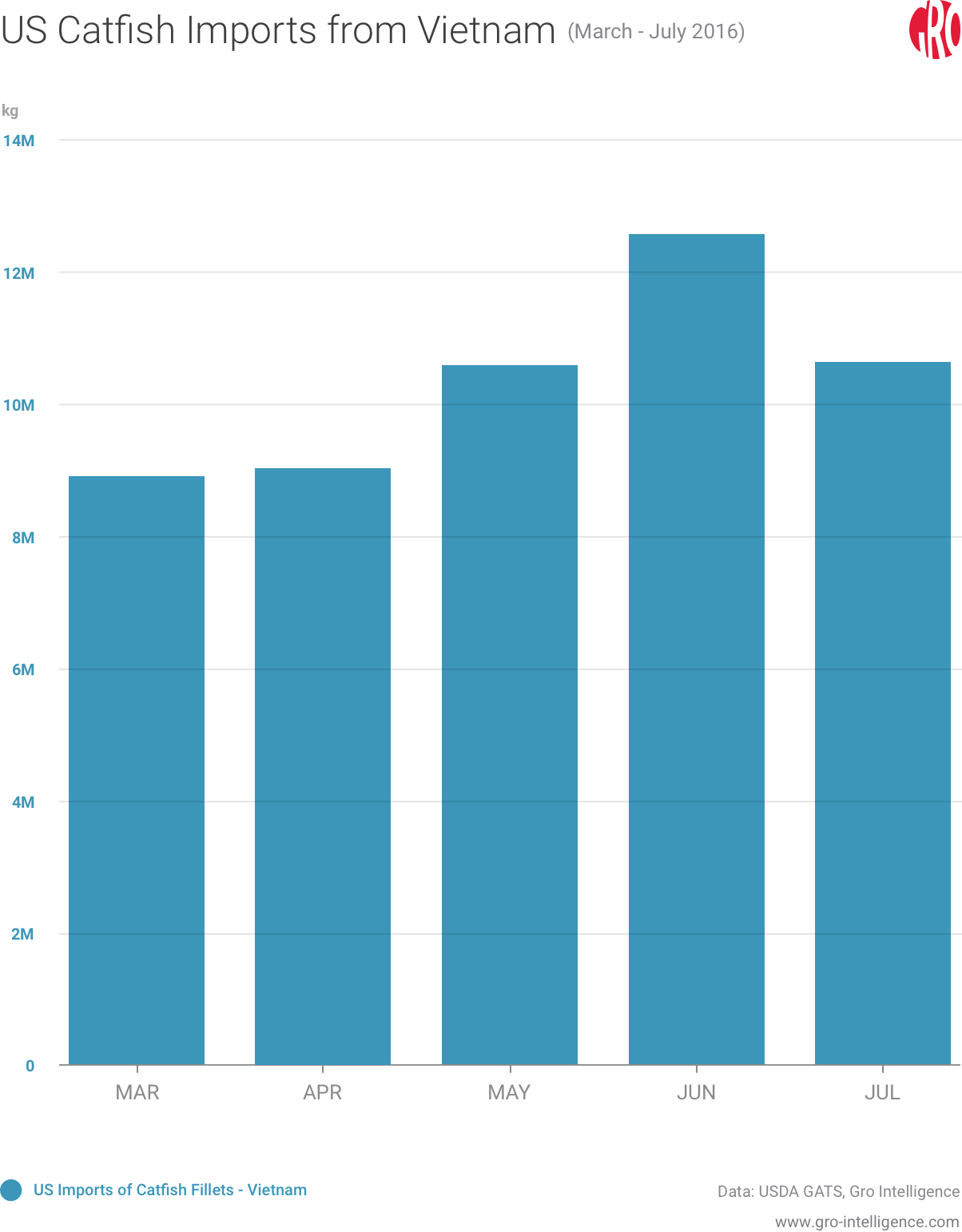 In Vietnam, catfish production costs average closer to 40 cents per pound, often allowing their exports to undercut US catfish by $2 a pound. Vietnam’s catfish exports have grown so quickly, in fact, that they now account for roughly 2 percent of the country’s GDP. That highlights the immense importance of the industry for Vietnam as well as the difficulty American producers will continue to have in competing with Vietnamese imports, as long as the country can meet phytosanitary standards.

While some US states are more efficient producers than others, none are as competitive as Vietnamese producers

How the TPP affects US catfish production

Vietnamese producers are hopeful that measures that reduce imports may be eliminated by the TPP. The trade pact would establish strict uniform phytosanitary regulations, and “investor-state dispute settlement” mechanisms may help to resolve trade claims.

US catfish production area has declined, largely hand in hand with production

Unfortunately for US producers, catfish isn’t highly prized for the quality of the meat, given that much of it is processed into fish sticks or other blended products. Another fact suggests that US consumers aren’t so discriminate on catfish taste: As imports of Vietnamese catfish surged, consumption of US catfish has declined, while US seafood consumption per capita has barely changed between 1992 and 2014.

Evidence suggests that catfish is a price-elastic good, and so the market favors lower-cost providers. During depths of the 2008 financial crisis, American catfish farmers were barely making 75 cents per pound on their produce. Even as the United States has continued to recover over the past five years, and farm-gate prices for catfish have risen to an average $1.04 per pound over the past five years, production costs repeatedly outpace revenues for most producers, making profitability ultimately dependent on highly volatile feed and fuel prices.

US catfish production has seen a remarkable rise, as well as a rapid decline. Farmers around the Arkansas area started to cultivate the fish commercially only starting in the 1960s. The sector grew quickly, at one point becoming the largest sector of the US aquaculture industry. No wonder that President Reagan had such positive hopes. In 2003, US domestic catfish production peaked at 130 million kilograms in sales, and that figure has steadily declined. No anti-dumping measure or regulatory scrutiny has yet been able to stop the imports of considerably cheaper catfish from Vietnam.

The TPP would dismantle many of the current import barriers of Vietnamese catfish. But US producers may not want to pin their hopes on the pact being scrapped. While TPP’s ratification remains uncertain, even if it were defeated and current barriers remain, Vietnamese catfish will likely find a way to American dinner tables. When President Reagan lauded the American farm-raised catfish industry for creating “thousands of permanent jobs,” he may have spoken prematurely, or predicted growth in the wrong country.