Which Countries Have a Protein Shortage in Their Future?

Most regions of the world produce enough protein in the form of plants to feed their populations. But when plant protein, such as grains and oilseeds, is converted into meat, dairy, and eggs—the foods people seem to prefer—the amount of protein ultimately available is sharply reduced. For some parts of the world, that can mean less protein than is needed for optimal nutrition.

A Gro Intelligence analysis of plant- and animal-protein production in four key geographical regions shows that Northern America and South America will continue to boast significant protein surpluses for years to come. In sub-Saharan Africa, an expanding livestock industry will reduce protein supplies, but still leave the region with a small surplus. But in China, a protein deficit, already alarming in size, seems likely to grow substantially.

Our projections used Gro Intelligence historical data and analysis, along with population and GDP forecasts from international agencies, to forecast supply-and-demand balances through 2036. In an article published in October, Gro Intelligence projected the amount of calories that will be available in different parts of the world. This Weekly Insight looks at the availability of protein, a major component of a nutritious diet, and the large role livestock plays in global agriculture and food security in four important world regions. 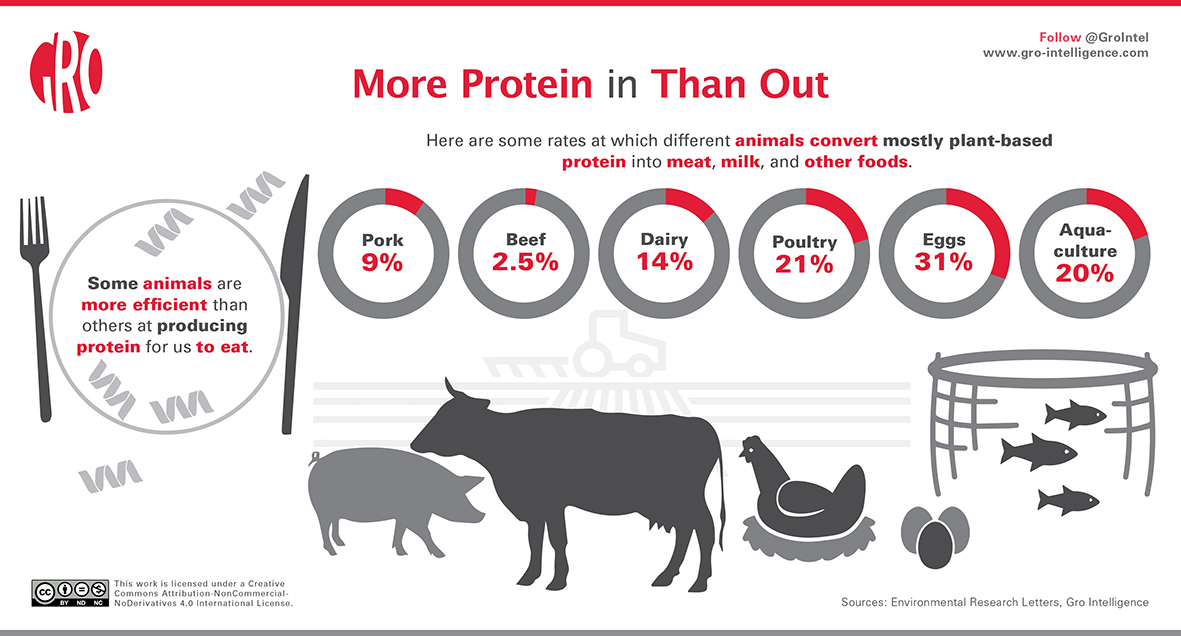 Cows, goats, sheep, donkeys, horses and similar animals make up the ruminant category of grazing and browsing mammals. Their ability to synthesize protein that humans can eat from grasses and other inedible plants has guaranteed them critical roles in the herds of animals kept for food production. That protein gets to the table in the forms of meat and dairy products. To the extent that ruminants feed on plant matter that people can’t or won’t eat, the food they produce boosts the overall protein supply. But in much of the world, cattle eat grain and oilseeds that could feed humans and therefore reduce the total protein and calories available.

Pigs do not have ruminants’ ability to convert inedible grasses to edible protein. Swine found their way onto the menu as victims of hunting at first. Once domesticated, people kept them partly as a way of using scraps of food that had been contaminated or allowed to decay. Now that humans have a taste for pork, we feed pigs mostly on grain and oilseeds that could be consumed by humans.

Chickens, ducks, and turkeys make up the bulk of the poultry industry, which supplies the market with both meat and eggs. Birds tend to convert feed into human-preferred protein with great efficiency. As with swine, some of their diet comes from sources that people would reject, like blood and bone meal.

People have relatively recently begun to cultivate fish, crustaceans, and mollusks at commercial scale, in an industry known as aquaculture. In aggregate, they produce protein for human consumption at high efficiency, second only to poultry. Furthermore, much of their feed is derived from very small fish caught in huge amounts and processed into fish meal. Although people could eat fish meal, they prefer not to, so much of this protein boosts the total available for human consumption.

In all cases of livestock agriculture, animals consume a suboptimal form of protein and convert it to a more desirable or palatable one. With cattle and other ruminants, the inputs (grasses) can be completely inedible for people and animals without four-chambered stomachs. In other cases, the inputs are distasteful, as in chicken, hog, or fish feed. In every situation, though, the livestock intermediary takes in more protein than it yields through eggs, dairy, or meat. Crop plants convert sun, air, water, and soil into food that humans and animals can eat. Livestock make those plants into the food that most humans seem to prefer. 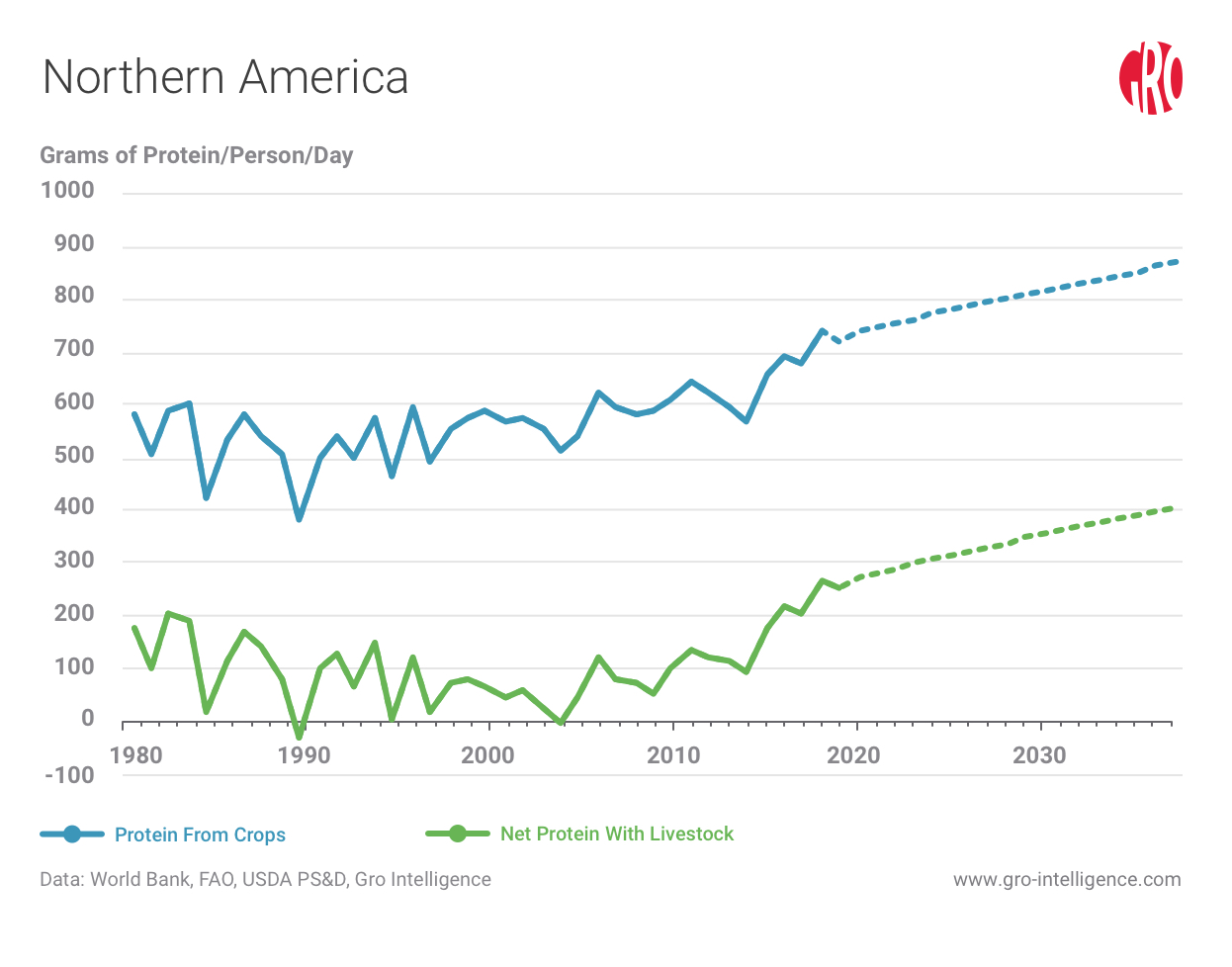 Two agricultural powerhouses—the US and Canada—make up the bulk of Northern America, a term that describes the area of North America excluding Mexico and Central America. Excellent crop productivity has led to huge protein surpluses in this region, about half of which get used up on animal products for domestic consumption and export. Despite some recent trade-war-related hiccups, the rest of the plant-based, mainly soybean, protein goes in ships to regions of the world that need additional supply to keep their people well-nourished. 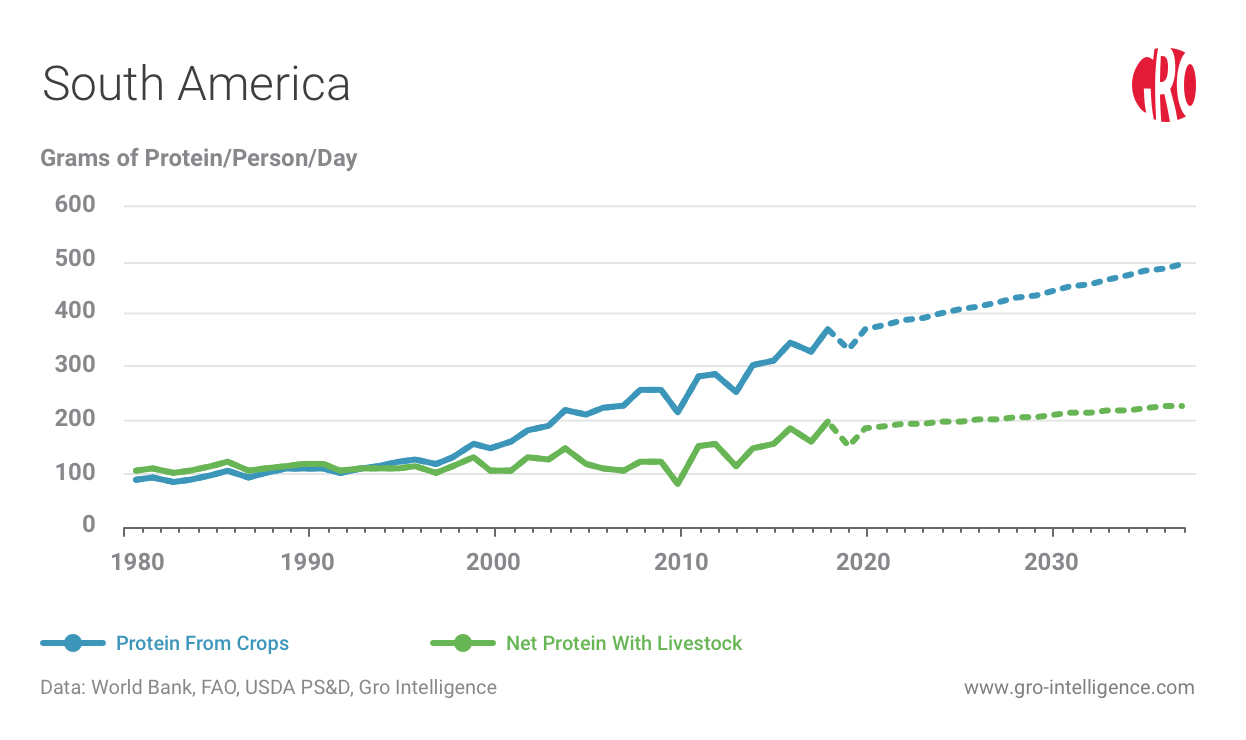 Prior to the advent of industrial agriculture, when cows ate grass and chickens and hogs ate yard waste, livestock added to the usable protein supply. South America in 1980 enjoyed that situation, with enormous herds of cattle grazing on the pampas to supply the famous steak-centric gaucho diet. As the continent’s agricultural industry has boomed over the past 40 years, the livestock sector has increasingly come to resemble that of Northern America. Livestock that formerly mostly fended for themselves now reside in modern facilities and consume feed rations made from field crops. As a result, despite huge gains in crop production, the net protein available to South America has grown about half as fast. As in Northern America, farmers and grain merchants load much of the remaining surplus into ships bound for deficit regions of the world. 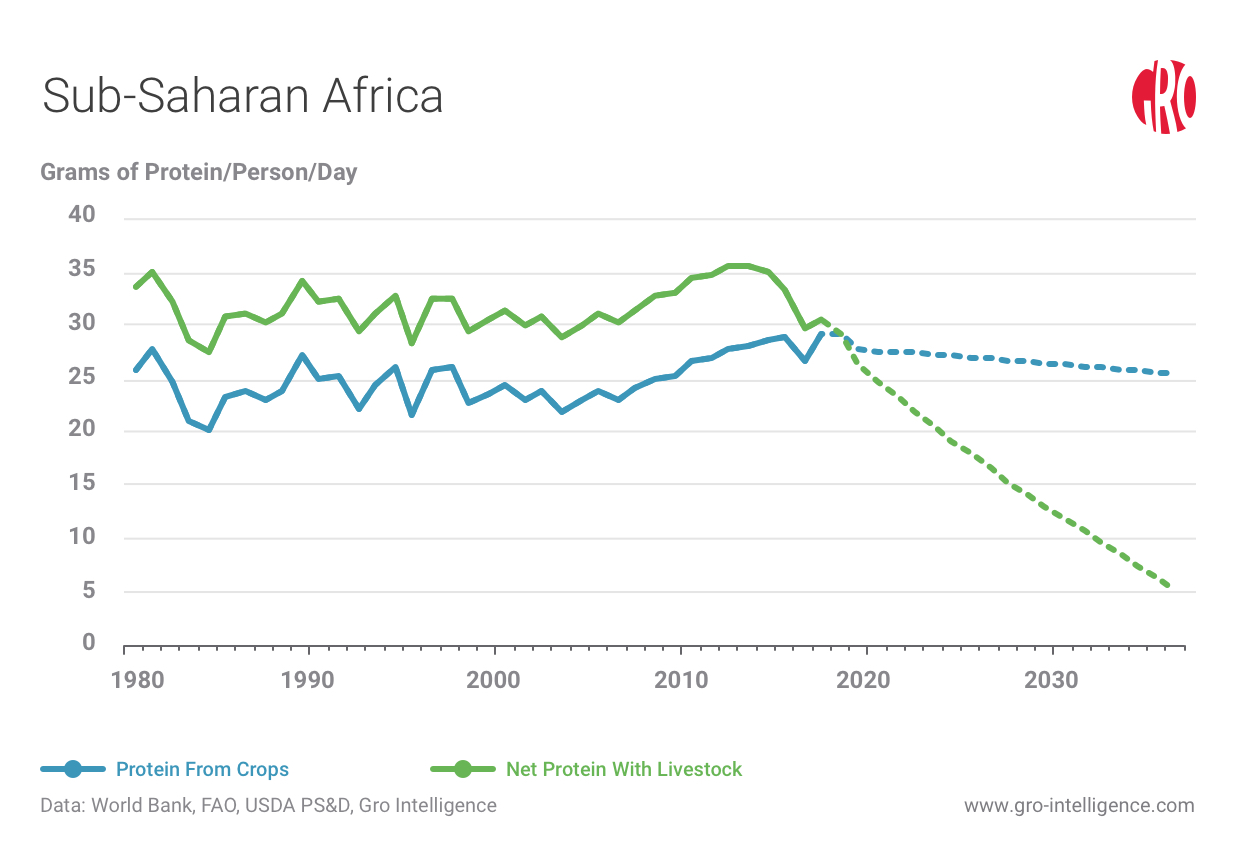 The sub-Saharan Africa chart looks alarming, as the region’s net protein availability sharply declines as its livestock industry grows. But net protein will remain in surplus, albeit only slightly, even with a booming population, through 2036. Also note that the scale is much smaller than charts for the other regions covered. Given that the minimum healthy daily adult intake is between 50 and 60 grams of protein, and the region is forecast to grow faster than anywhere else in the world, this lack of self-sufficiency should cause alarm. A slowdown in preference for meat over plant sources of protein could help the situation enormously. 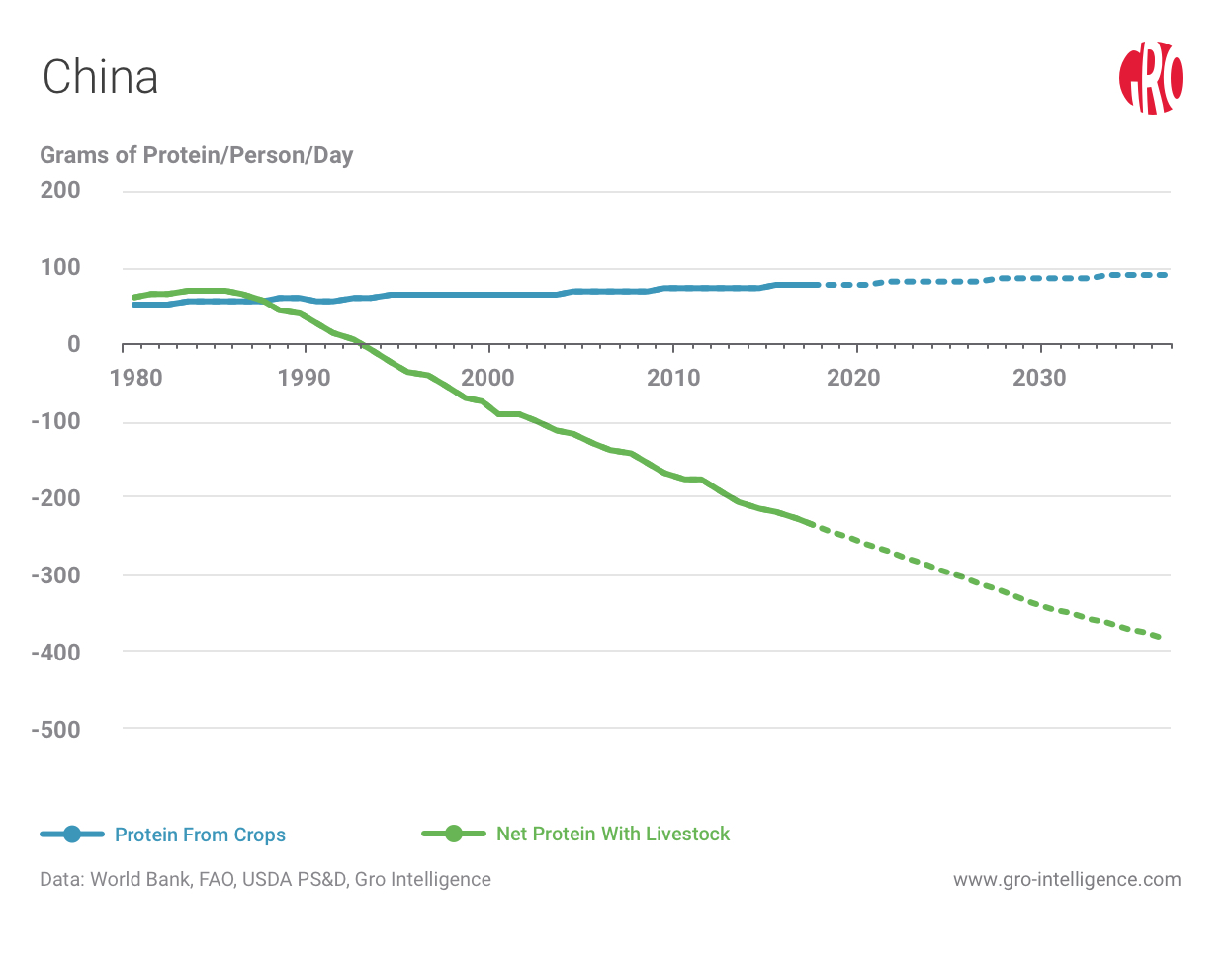 China faces a serious protein shortage. Agriculture has not kept up with the country’s unprecedented economic miracle of the last 30 years, which has seen GDP explode to almost 40 times its previous size. As Chinese farmers migrated to urban centers, the new industrial workers’ diets changed to resemble Western diets more closely. Unfortunately, their growing taste for meat outstripped the food industry’s ability to supply raw protein for livestock, resulting in imports of plant protein, mainly soybeans, beyond anything seen before.

China’s utter dependence on trade to fill a protein deficit poses a significant risk for China, and given the country’s importance, to the rest of the world as well. There are signs that consumer demand for meat may be leveling off, surprising Western observers who expected a convergence to Western consumption levels. But if China’s continued urbanization and GDP growth expected by analysts worldwide materializes, even with lower meat-demand growth, dependency on imports will grow to even more stunning levels. 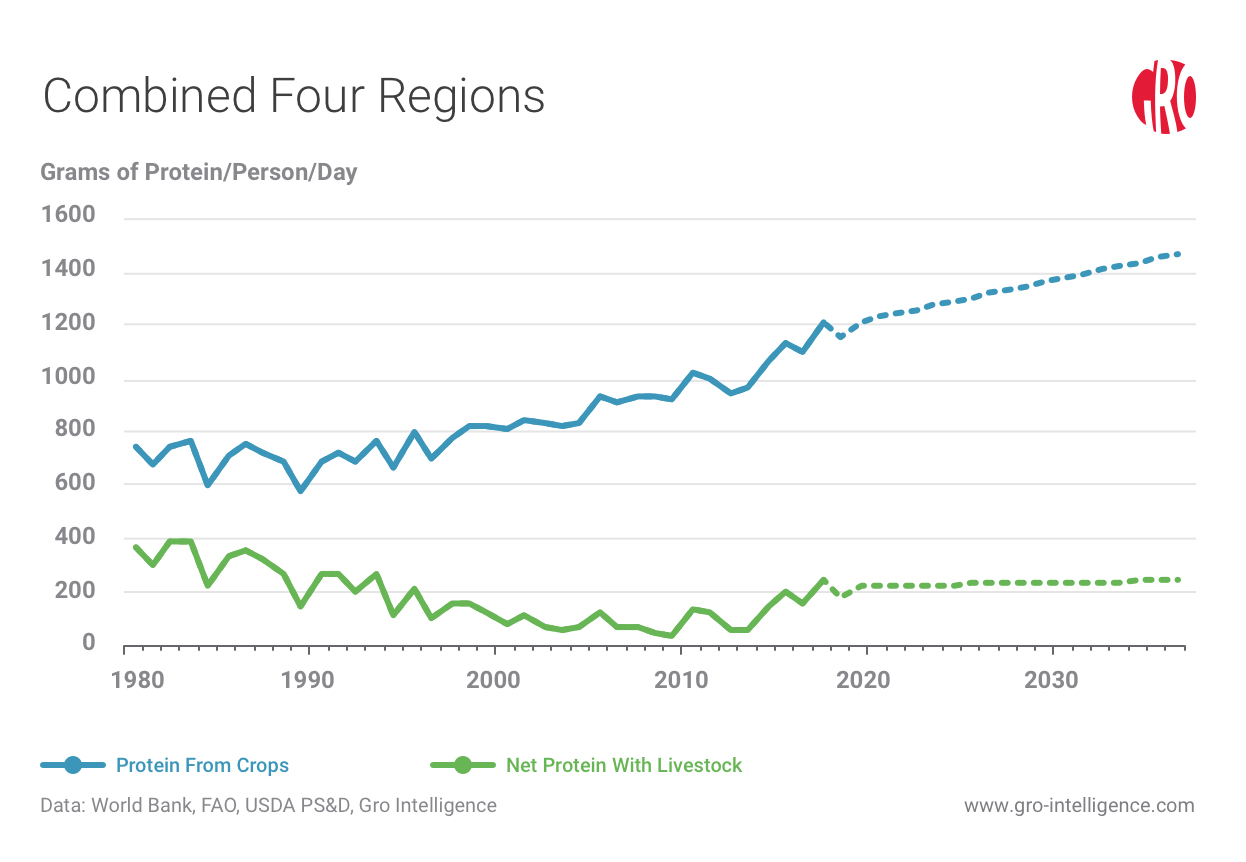 Taken as a whole, the protein picture looks positive, in a way. The material exists to feed everyone in the regions adequately, even with forecast population and GDP growth. Several cautions are in order:

Everyone involved in production or consumption of food should appreciate the issues around calorie and protein balances. For those on the front lines of the struggle to keep the world supplied, current, thorough, and accurate data flow enables quick reaction to developing problems and proactive anticipation of critical trends. Gro Intelligence’s agricultural data and analytical products provide the insights that our customers need to help the world gain and sustain a high level of food security.