The US agricultural industry’s attention has focused so far this season on record Corn Belt precipitation, late planting, and prevent-plant area. Now is the time to shift focus to growing conditions and crop yields.

Unlike in more normal years, the USDA hasn’t been especially helpful at providing important information. Critical data such as updated planted acreage and anticipated yields won’t be announced until the department issues its next monthly WASDE report on Aug. 12. The USDA’s FSA arm will separately announce the first estimate of acreage prevented from planting at a later date. Even with that new information, market uncertainty will prevail for several more months until the USDA collects more field data.

As markets await more detailed government data, Gro Intelligence users have access to a number of tools that can aid in making crop balance-sheet adjustments and important business decisions. A previous Insight article described Gro’s predictive capabilities for prevent-plant acreage. In addition, Gro’s US Corn Yield Model updates daily, and is currently forecasting significant declines in many Corn Belt counties, as well as in the average yield nationwide. A few regions are bucking the downward trend, and appear to be headed for corn yields that are equal to or higher than last year.

Gro’s yield models take account of a wide range of factors, from satellite-based vegetative health indicators to ground-measured environmental conditions and pixel-level crop masks. In this Featured Insight we dig deep into the Gro US Corn Yield Model to show which factors are principally driving predictions nationally and in several key producing counties. The USDA’s yield estimates are national and state averages; it only releases county-level yields in the spring for the previous year.

How We Got Here
Hard-Hit Counties
Bright Spots
Conclusion 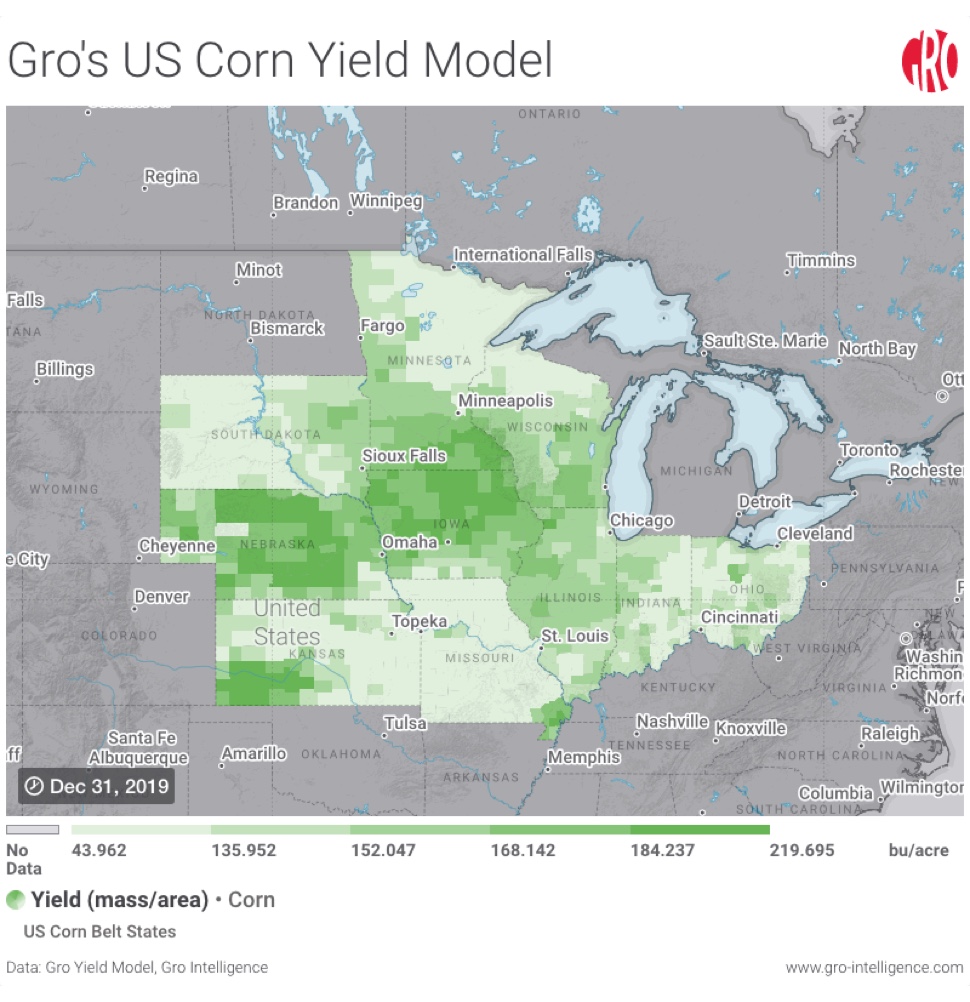 This map shows the county-level detail of Gro’s US Corn Yield Model. The eastern Corn Belt is showing poor yield forecasts, represented by paler green shadings, after suffering the worst of excess moisture and delayed planting this spring. Overall, average US yields are well below last year’s. Click on the image to go to an interactive map on the Gro web app.

The 12-month period through May was the wettest on record for the contiguous United States, according to the National Oceanic and Atmospheric Administration (NOAA). This included virtually all of the key corn- and soybean- growing states. As a result, planting progress for corn was the slowest on record from mid-May onward. This put farmers in a difficult position of deciding to take insurance payouts with the prevent-planting option or to plant late in the season in wetter than normal fields. Complicating matters was a sharp rise in the price of corn futures just ahead of insurance-policy final planting dates.

Above-average precipitation continued into June in several Corn Belt states, with Indiana and Ohio seeing the largest anomalies. Corn prices continued to rise in June both in absolute terms and also against soybean prices, which motivated some farmers to attempt to plant corn much later than normal. The USDA released its Acreage Report on June 30, but this was based on surveys from early in the month when many farmers hadn’t yet settheir intentions, let alone actually planted anything. As a result, the USDA said it would resurvey 14 key corn states, covering the bulk, or 84%, of planted area. All of this leaves planted acreage numbers as a big unknown as the crop transitions to key growing phases. 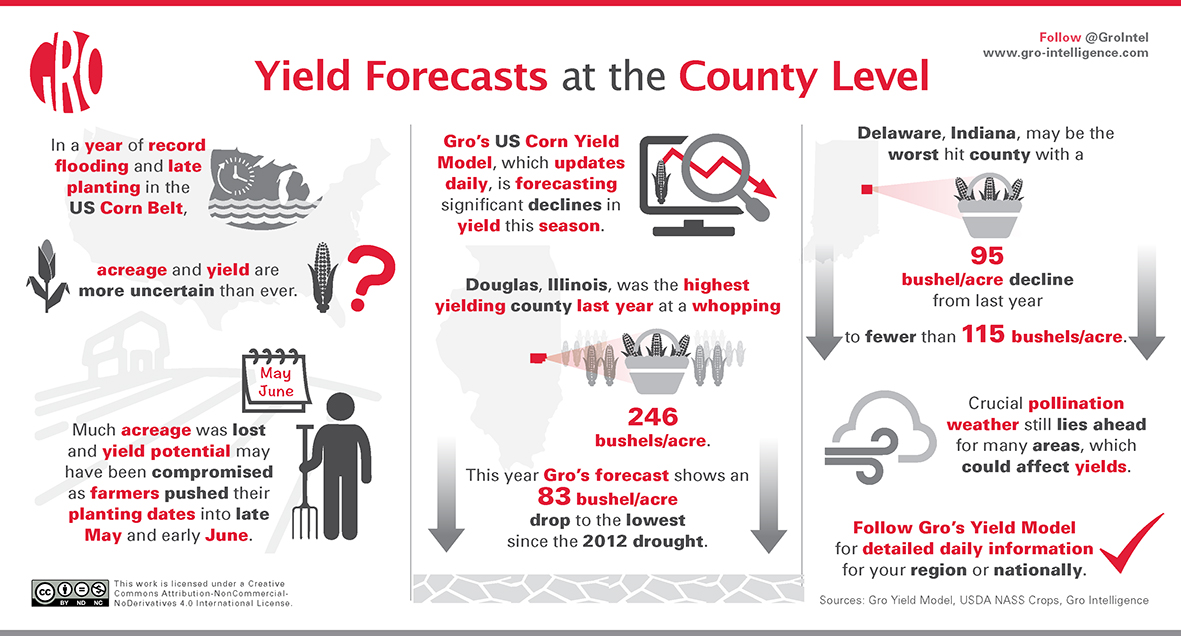 Beyond what is surely to be a large amount of lost acreage, yield potential may also have been compromised by timing. Previous years with significant planting delays and prevented area typically also suffered below-trend yields. Many studies have sought to quantify expected yield declines based on planting date. In general, the studies found, corn yields declined as the planting date extended into late May, and went down even more if planting was pushed into June.

Based on those delays, the USDA preemptively cut 10 bushels per acre, to 166 bushels/acre, from its corn yield estimate in the June WASDE report and stayed at this level in the July report. Gro’s Corn Yield Model as of July 24 is predicting an even lower yield of 159.6 bushels/acre. The Gro model updates daily.

The August WASDE report will give the market the first yield-estimate number based on NASS field surveys. The WASDE will also include revised planted acreage figures based on the farmer resurveys. In addition, the USDA’s balance sheet for corn could change quite a bit in the report. All that information, due out on Aug. 12 will only begin to shed light on this year’s crop prospects, until more extensive field data can be collected closer to the end of the season.

Gro’s US Corn Yield Model can be a valuable source of information while crops are still maturing. Not surprisingly, the counties forecast to have significant yield declines also had very delayed planting and are expected to have considerable prevented area. Although the ultimate yield will depend to a large extent on growing conditions in coming weeks, and some areas could recover, the current yield prediction is well below trend.

2018 was an exceptional year for corn yield. There were 180 counties that topped 200 bushels per acre, with some of the best performers in Illinois. For this year, Gro’s yield model is forecasting that fewer than 10 counties will reach 200 bushels/acre.

Douglas, Illinois, was the highest yielding county last year at a whopping 246 bushels/acre. This year, Gro’s forecast shows an 83 bushel/acre drop in Douglas County to its lowest yield since the 2012 drought. Illinois overall had historic output last season, but yields look to drop more than 25% from that peak following this season’s record moisture and delayed planting.

Several other counties across Indiana and Ohio are also forecast to decline by more than 80 bushels/acre. Delaware, Indiana, appears to be the Corn Belt’s worst hit county with a 95 bushel/acre decline year over year to below 115 bushels/acre.

The chart on the left shows the yield history of select counties in Illinois, Indiana, and Ohio as colored lines, while the bars show the current Gro Corn Yield Model forecast for those counties. These are some of the biggest year-over-year declines in yield in the country. The chart on the right shows the daily prediction of the Gro Yield Model for Illinois for 2018 (green line) and 2019 (blue line). The forecast fell slowly in June and then dropped sharply over the first half of July before stabilizing a bit. Click on the image to go to an interactive map on the Gro web app.

Among the main factors in the Gro yield model driving the expected yield declines is vegetative health, which is poor in the eastern Corn Belt due to late planting and delayed plant development. NDVI, the key measure of vegetative health, is at its lowest reading for this time of year for Illinois, Indiana, and Ohio.

Also weighing on estimated yields for the eastern Corn Belt is the percentage of crops rated by farmers to be in “very poor condition” for this point in the season. It’s atypical for a poor crop condition to emerge this early in a season, giving this factor unusual weight in the Gro yield model’s current yield forecast.

The land-surface temperature component in the Gro yield model is actually giving a positive bump to forecast yields, mainly for Ohio, as recent hot weather is making up for overly cool temperatures during the earlier periods of heavy precipitation.

These charts show NDVI readings for Illinois and Indiana for every year from 2000, stacked on the same calendar day of the year. 2019 (blue lines with markers) is the lowest on record for this time of year for both states. Illinois and Indiana are the second- and fifth-largest corn producers in the US. Click on the image to go to an interactive map on the Gro web app.

Corn yields in southwestern Kansas are for now on track to top last year’s outcome, according to the Gro yield model. That area avoided the heavy spring rains that affected the eastern part of the state, allowing for a more normal planting schedule. Beneficial rainfall in June and early July, combined with better farmer ratings for crop condition, gave a boost to the model’s forecast. However, a heat wave across the Midwest this past week pulled down the yield estimate somewhat.

In three Kansas counties—Grant, Haskell, and Meade—yield is expected to exceed 200 bushels/acre, above last year’s result, Gro’s yield model is forecasting. Many Kansas counties benefit from several static variables in the Gro model, including soil characteristics and percentage of area irrigated.

Nebraska and Iowa are leading the country in estimated yields, of 178.2 bushels/acre and 178.6 bushels/acre, respectively, according to the latest output of the Gro Corn Yield Model.

For Nebraska, the estimate is down from the record 191 bushels/acre last year, but is close to the five-year average. Vegetative growth was slow like in other states, but NDVI readings accelerated for most of June and the first week of July to briefly match last year’s level. Counties in eastern Nebraska along the Missouri River are suffering a bit more from the excessive moisture and high river levels experienced during planting. As a result, NDVI is a bigger drag on yield forecasts for that part of the state.

Record precipitation, delayed planting, and unknown acreage numbers upended preseason expectations of a comfortable US corn supply-and-demand balance sheet. Now the market is watching the always-unpredictable weather amid greater than normal production uncertainty. Highly variable planting dates in different parts of the Corn Belt make 2019 difficult to compare to other years for any yield model. Therefore, it is especially important this season to understand what factors are driving a model’s predictions and how those factors’ weightings evolve over time. Yield models inherently have a sizable standard error, which should always be kept in mind when considering a snapshot forecast. Gro endeavors to be transparent with its models and encourages users to build their own using the extensive data on the Gro platform. Gro API users also can combine Gro data with their own proprietary data to create customized models.

For Cinco de Mayo, US Avocado Import Volumes Jump as Much as 48%