Year in Review: Gro’s Five Most Popular Insights of 2019

2019 was a momentous year for agriculture worldwide. Through it all, Gro Intelligence users took advantage of Gro’s huge data platform to more closely and astutely follow the big stories of the year.

As Gro continues to rapidly add new data sets and build predictive models, users increasingly will be able to benefit from the Gro platform in 2020.

2019 began with the USDA scrambling to restore its flow of data following a five-week government shutdown. That was followed by heavy winter snows and spring flooding across much of the US Corn Belt, which delayed planting and prevented a record number of acres from being planted. The US government stepped in with subsidies that boosted farm income, but some growers benefited much more than others. Meanwhile, on the other side of the world, the severity of China’s battle with African swine fever was coming into focus.

Read on to see how Gro data helped users derive deeper insights on these and many other major agricultural developments this year.

The outbreak of African swine fever in China is one of the biggest agricultural stories of 2019. The world’s largest pig herd was cut in size by some 40%—that’s 130 million animals lost! China’s resulting pork shortage, and soaring pork prices, sent Beijing hunting far and wide for meat imports. From Brazil and Canada, to the US and France, China forged new trade ties and patched up problematic old ones to secure supplies of pork, beef, and poultry. The spread of African swine fever, including to other Asian countries and parts of Europe, has shown little signs of abating. That promises to disrupt global trade flows for years to come.

Brazil in particular is leveraging China’s woes to ramp up its beef exports. The South American country also is gunning for global dominance in soybeans—an important feedstock for pigs—taking advantage of the US export handicap amid the US-China trade war.

Gro Intelligence users are able to track these continuing dynamics with a host of data sets on the Gro platform, including Brazilian sources MDIC and CEPEA, and trade flow and production statistics from the USDA’s GATS and PS&D arms. Data from China include NBS and CASDE, and will soon also include JCI China and Cofeed. 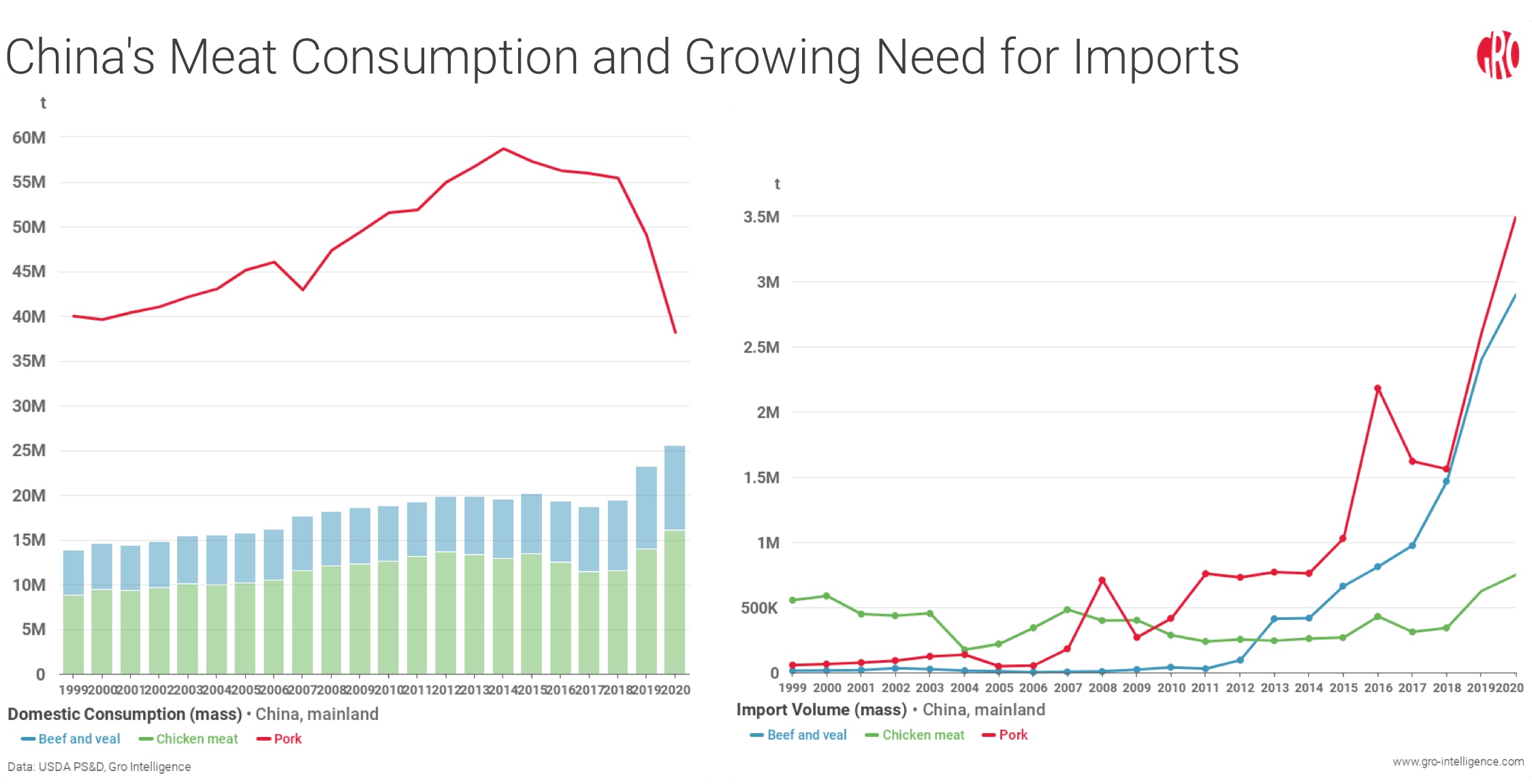 Pork traditionally dominates meat consumption in China, but African swine fever is forcing some big changes. Pork consumption is forecast to drop 22% in 2020, while chicken demand should increase 15%. Beef consumption is expected to grow a robust 17% in 2019 before leveling off to 3% growth in 2020, according to the USDA. The chart on the right shows the USDA’s forecast for imports taking a huge jump in 2019 and 2020 for beef (blue line) and pork (red line). Chicken, most of which is produced domestically in China, is also set to have significant growth in imports (green line).

There was no shortage of drama to the main US planting season in 2019. Late storms followed by widespread flooding meant weeks of delay to getting seeds in the ground, and forced many farmers to abandon their fields altogether. It was a time of hard decisions for growers. Prevent-plant insurance offered some compensation, but not nearly enough.

Commodities markets were hungry for information about acreage planted and the impact delays would have on yields. Gro’s team of research analysts sprang into action, employing satellite feeds, river gauge levels, crop-weighted maps, and other data to determine where the floods were having the greatest impact. Gro also developed a unique model using machine learning to estimate the extent and location of prevent-plant acreage. When the USDA eventually released its own prevent-plant-acreage estimates in mid-August, the data underscored the validity of the Gro model forecast, which was available to Gro users weeks earlier.

The late season bred market mistrust of USDA reporting, even after a second round of farmer surveys to confirm its acreage data. Meanwhile, Gro’s yield models for US corn and soybeans continued to update daily, based on factors ranging from satellite-derived vegetative health indicators and ground-measured environmental conditions to pixel-level crop masks. Gro’s soybean yield model ended the season with a forecast of 46.65 bushels per acre, compared with the current USDA forecast of 46.9 bushels/acre. For corn, the Gro yield model projection of 170.0 bushels/acre compares with the USDA’s 167.0 bushels/acre. The USDA will release its final yield estimates for the year on Jan. 10, 2020. 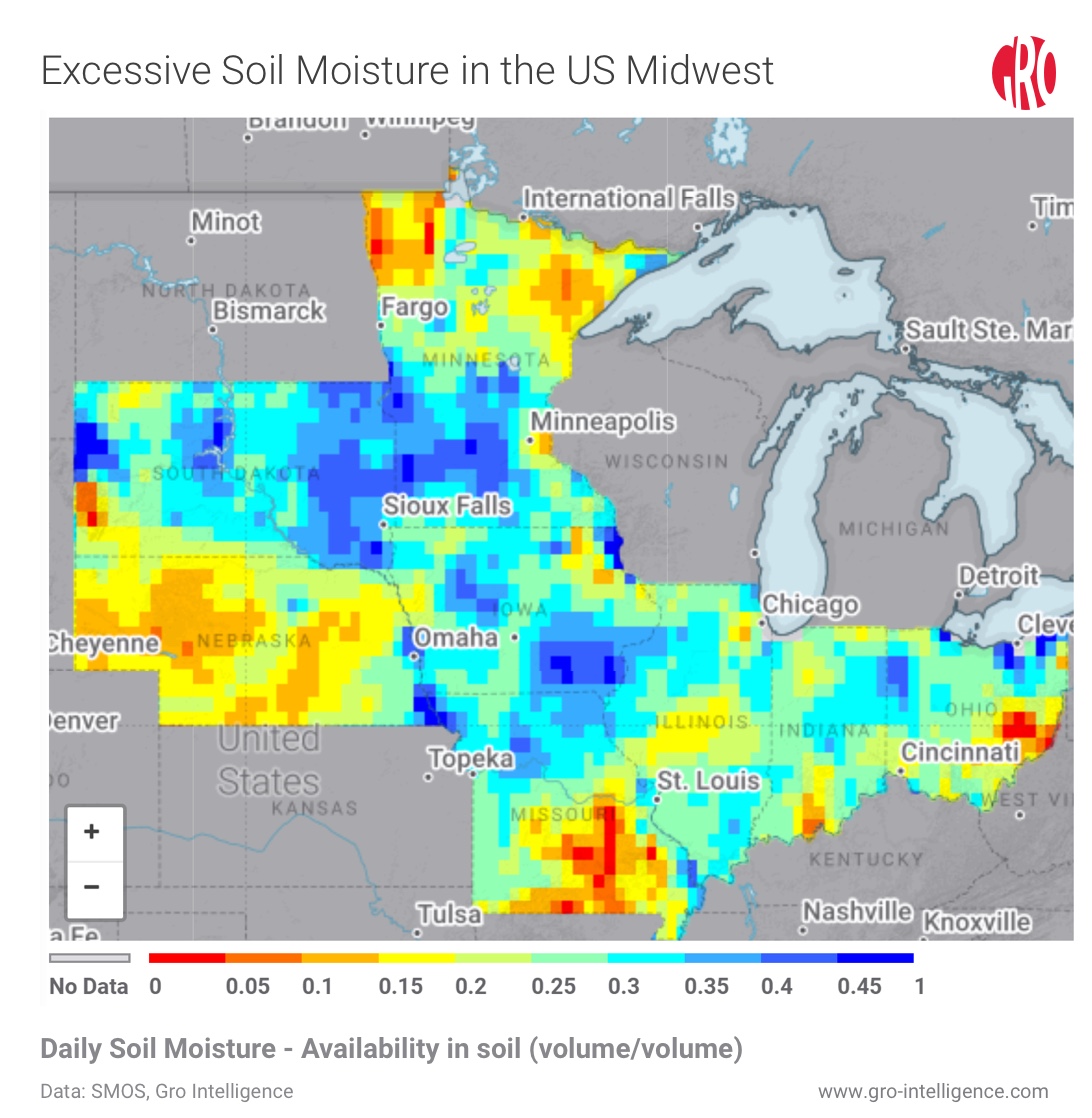 The map above shows relative saturation levels across the US Midwest, with excessive soil moisture shaded dark blue. The Missouri River basin, around South Dakota, is one area that has been especially inundated.

Gro Analysis Shows How Much Relief US Bailout Will Bring

After one-and-a-half years, the US-China trade war is finally showing signs of a possible resolution. Farmers are still reeling from the tariff fallout, however, especially after a dramatic shrinkage of export markets and slumping grain prices. The diverging fortunes of different crops also helped cause a substantial shift into corn acreage in the spring, reversing five years of increasing soybean planting.

US government payments, through the so-called Market Facilitation Program (MFP), went some way to ease the pain and secure farmers’ buy-in as Washington continued to pressure Beijing on trade issues. Under the MFP, $14.5 billion was distributed to growers in 2019. But, as usual, the devil was in the details, and government formulas for who gets paid and how much ensured the funds would not be distributed evenly across the Corn Belt. Gro analyzed these government formulas and combined them with Gro yield model estimates, current market cash prices, and USDA NASS data to determine the winners and losers of the bailout program down to the county and state levels.

On a national level, the MFP played a big part in boosting net cash farm income in 2019. But, again, incomes vary widely by state and agricultural sector. Gro broke down the disparities in an analysis that combined current national-level forecasts for product sectors and historical state-specific data from USDA ERS.

These maps compare US state-level corn yields in 2018 and 2019. On the left is 2018 final yield according to USDA’s NASS. On the right is the latest reading from Gro’s corn yield model for the 2019 crop. Most key producing states are expected to see a substantial fall in corn yields this year.

The five-week US government shutdown that ended Jan. 25, 2019, cut off the usual flow of critical data. Agricultural industry participants lost access to reliable information from the USDA about production, demand, and trade estimates on US and global agriculture, which is often published long before many other countries’ statistics agencies report their own numbers. Most critically, the USDA delayed release of its closely watched World Agricultural Supply and Demand Estimates (WASDE) report for January.

Gro stepped in to fill the gap. With one of the world’s most comprehensive agricultural data platforms, Gro was uniquely positioned to reproduce the large number of robust forecasts contained in WASDE, and made its results available to the public free of charge. Gro forecast demand for corn, wheat, and soybeans, as well as production and usage for major world crops. In all, Gro released over 1,000 estimates covering 35 crops grown around the world.

When the USDA finally released its long-delayed WASDE on Feb. 11, the data resoundingly validated Gro’s decision to produce its own version of the report. Out of 55 separate values that Gro published on Jan. 11 and then updated on Feb. 7, Gro got the direction of USDA’s change correct on 51 of them—a 93% hit rate!

Gro’s platform continues to provide users with the resources to build effective supply and demand balance sheets, which are an essential part in understanding a commodity market and factors driving price movements. Gro Insight articles have explained how to construct a balance sheet, make forecasts for the upcoming season, and update predictions as new data is released. These articles offered a solid explanation of what good agricultural analysts, including those at Gro, do when they’re poring over supply and demand spreadsheets and modifying numbers based on industry data. 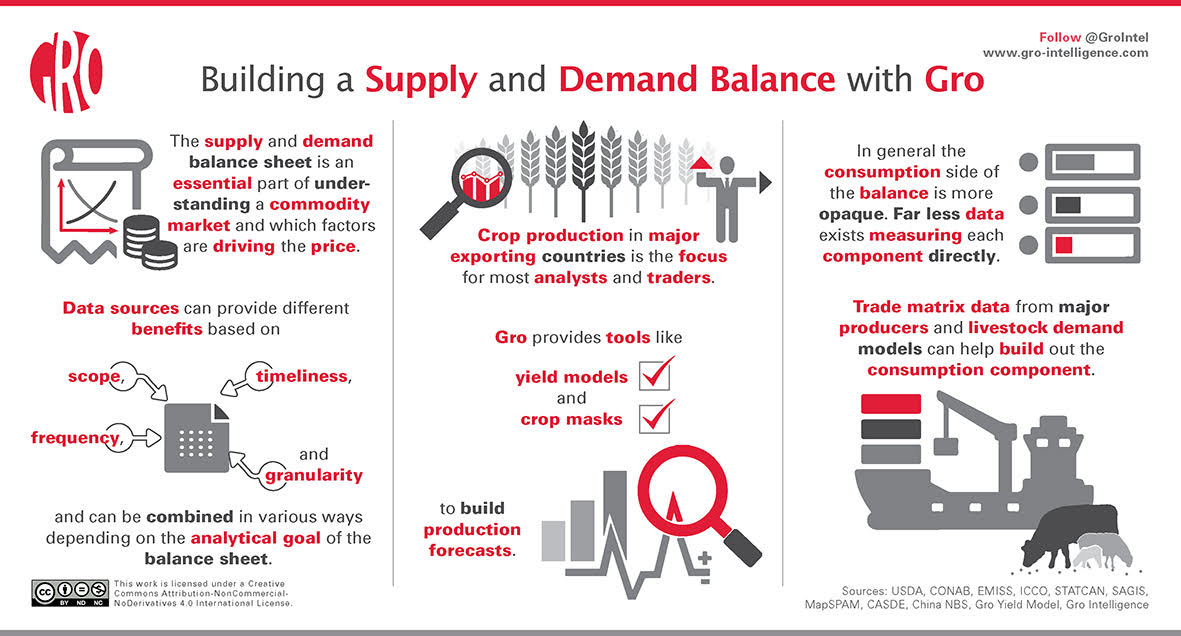 Agriculture’s mission is to feed people. If there is food insecurity somewhere in the world, the industry isn’t doing its job well. A four-part Gro series of articles on global nutrition found that much of the problem is that some regions have more food than they need while others have too little. Uninterrupted, secure transpacific and transatlantic shipping lanes are the linchpin that hold the system together. Unfortunately, the gap is widening between countries with food surpluses and those with deficits. And with that, the risk and consequences of an unpleasant surprise are growing.

For this analysis, Gro calculated daily calorie and protein balances per capita for the world’s regions, and projected the statistics out to 2050 using demographic and agricultural data from Gro, the World Bank, and the United Nations. In all four installments in the series, the magnitude of the calorie/protein geographic misalignment clearly stands out. Read parts one, two, three, and four of the series. 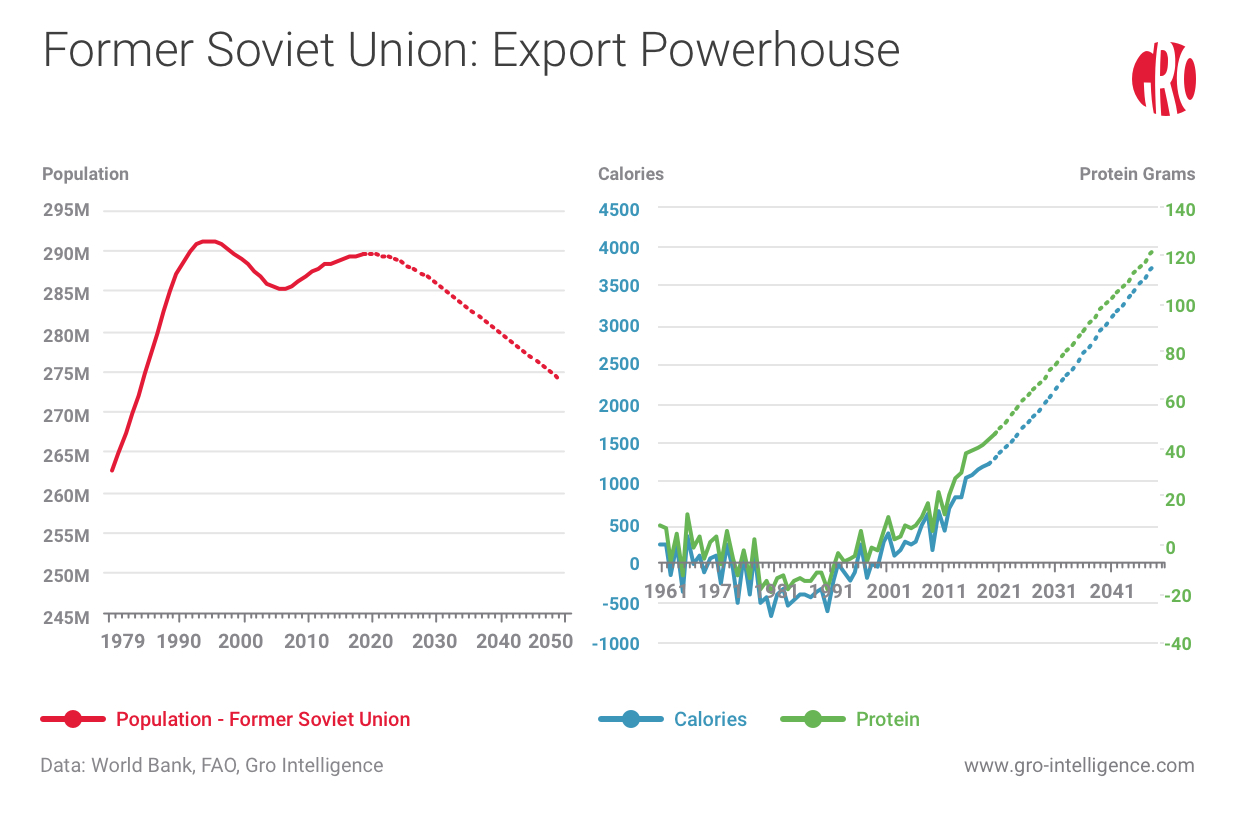 Population in countries of the former Soviet Union is expected to decline sharply in coming years (left chart). But as the region’s agricultural production booms, excess food supplies (right chart) are expected to strongly boost exports. The chart at right shows net calories and net grams of protein per person per day.

Best wishes for all of you in 2020. May it be a year of abundant joy, happiness, and high quality data!