Lemons and limes were originally brought to the Americas by Europeans, although their exact global origins are unknown. They are most likely from Southeast Asia or Australia, and they were first cultivated in different parts of Asia—lemons in India, oranges and mandarins in southern China. Trade routes expanded, and lemons are first thought to have been grown in Italy as early as 200 AD; Mexican limes, also called key limes, were introduced to the Middle East by Arab traders, then from the Middle East to Europe by Crusaders. Spanish colonists brought them to the Americas. Columbus brought lemon seeds to Hispaniola in 1493, and by 1520 Mexican limes were reported to be regularly cultivated in Haiti, eventually spreading throughout the Caribbean Islands and the Mexican mainland.

Mexico grows three main types of lemons and limes: Mexican limes, Persian limes, and lemons. Small, green-yellowish in color and with a thin peel, the Mexican lime (Citrus aurantifolia) is the most popular variety consumed in Mexico. Persian limes (Citrus latifolia), also called Tahiti limes, are slightly larger, with a thick peel that is vivid green when unripe and green-yellow when ripe. They are suspected to be a hybrid of the Mexican lime and the citron. Lemons (called Limónes italianos by Mexico’s official statistics bureau), Citrus limon, are larger than limes and yellow in color. 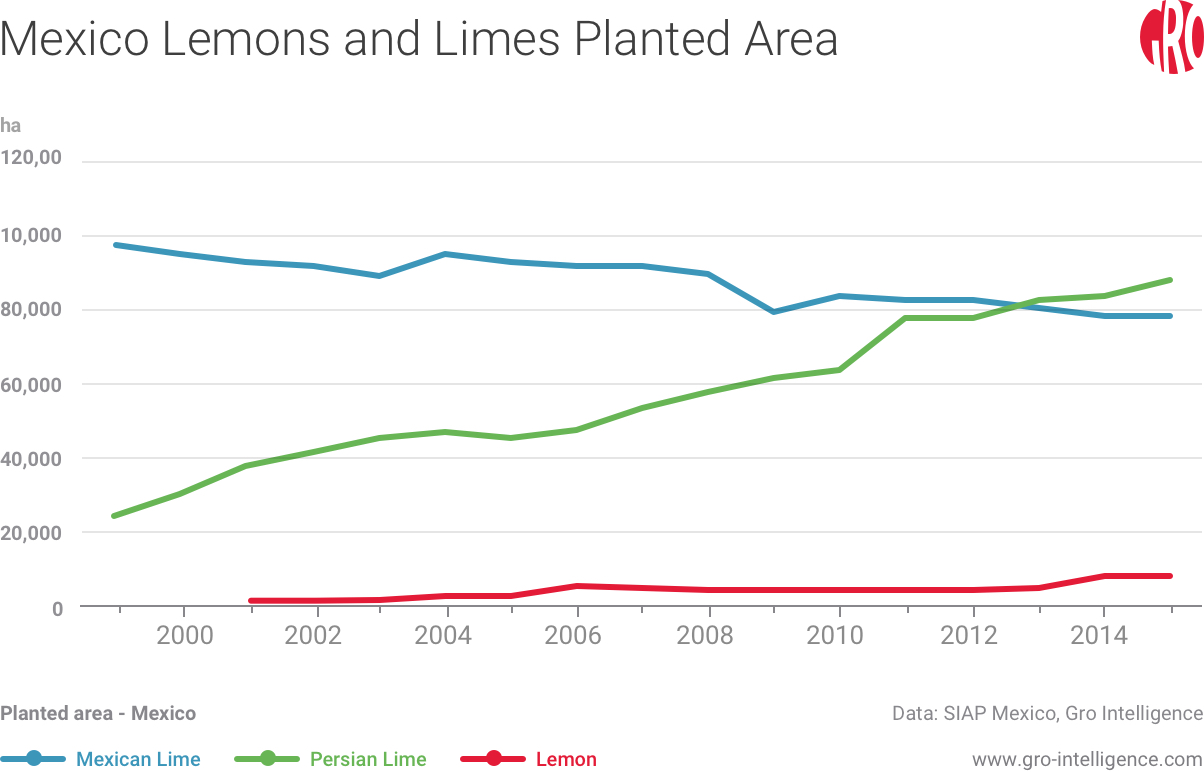 Historically, the Mexican lime has by far been the most popular of the three in the country. It’s served as a condiment to squeeze on all types of foods, including peanuts, fruit, tacos, and meat. It’s a popular garnish in sodas, beer, and cocktails, and the quintessentially Mexican margarita uses lime juice as its main ingredient. In Mexico, the fruit is also used in a number of home remedies for different ailments, such as gout, insomnia, chest congestion, and indigestion.

In recent years, however, cultivation of Mexican limes has slipped as Persian limes and lemons have become more attractive for growers due to their export potential, particularly to the United States. NAFTA opened up the US market for Mexican citrus growers. After the trade agreement was signed in 1994, Mexican lemon and lime production began to increase, followed several years later by a rise in US imports of lemons and limes from Mexico as well as US lemon and lime consumption. The US market prefers the larger, juicier, and relatively seedless Persian limes, so Mexican growers began boosting planted area of Persian limes rather than Mexican limes. Citrus production has enabled limes to become a staple of Mexican food and culture, and the fruit provides a major source of foreign exchange earnings; but citrus cultivation in Mexico and and around the world is increasingly threatened by HLB. 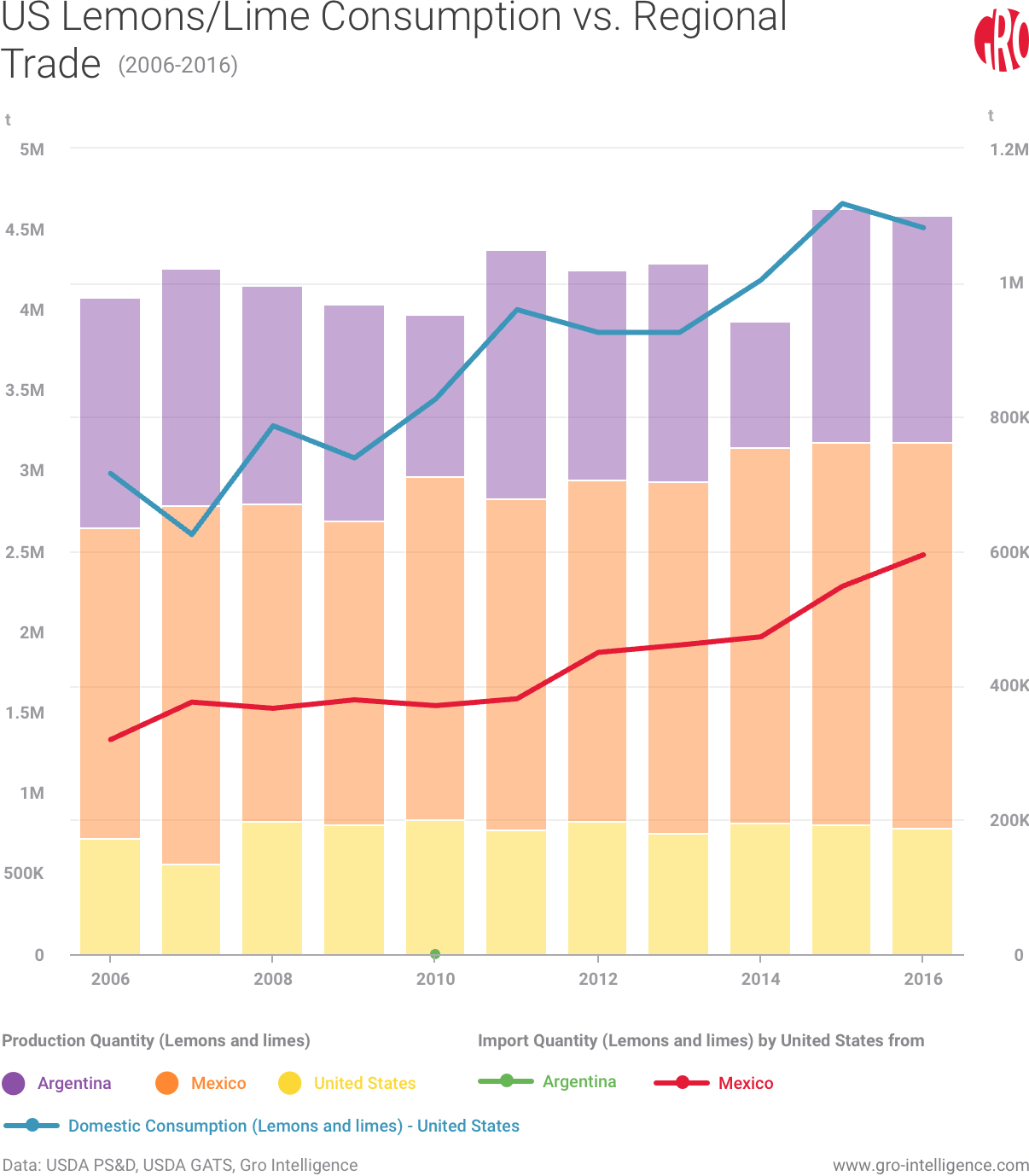 HLB, or citrus greening, caused by the bacterium Candidatus Liberibacter asiaticus, represents a major threat to citrus production worldwide. The bacteria is spread through the Asian citrus psyllid, a small insect related to aphids that eats the leaves and stems of citrus trees. The leaves of an infected tree turn blotchy and yellow, and its green fruit is too bitter to be consumed. The disease is harmless to human beings, but it is deadly to citrus trees. Without a cure or treatment, infected trees must be removed to prevent spreading to nearby trees. All citrus growing regions in the world except Australia and the Mediterranean basin have recorded cases of HLB.

HLB was first detected in Mexico in 2009 and has since spread to 23 of the country’s 31 states, in a total of 336 municipalities. This includes crucial lime-growing states such as Veracruz and Michoacan, although in many cases the bacteria is detected in psyllids without any sign of infected trees. Perhaps the worst case of HLB in Mexico has been in the state of Colima, on the Pacific coast. In 2011, Colima produced 493,686 tonnes of limes (23.1 percent of total Mexican output), with a yield of 23.88 tonnes per hectare. . Over the next several years, HLB ravaged citrus groves in the state, and by 2014 it’s production was down to 174,616 tonnes of limes with a yield of 9.43 tonnes per hectare. 2015 brought the first sign of improvement to Colima’s situation, with a modest increase of production and yield to 191,890 tonnes and 10.64 tonnes per hectare, respectively.

While citrus greening has significantly decreased lime production in Colima, the disease hasn’t spread to the point that production and yields have been reduced nationwide. Still, lemon and lime growers in Mexico have reason to be worried. Veracruz, the state that produces the largest share of Persian limes, has already experienced production shortfalls due to citrus greening, leading to abandoned orchards and an expansion of new planted area. Growers have managed to slow the spread of disease only by extreme vigilance in applying agrochemical products to prevent infection. In 2009 and 2010, strict government regulations were also instituted for the control of any citrus material to maintain high phytosanitary standards. 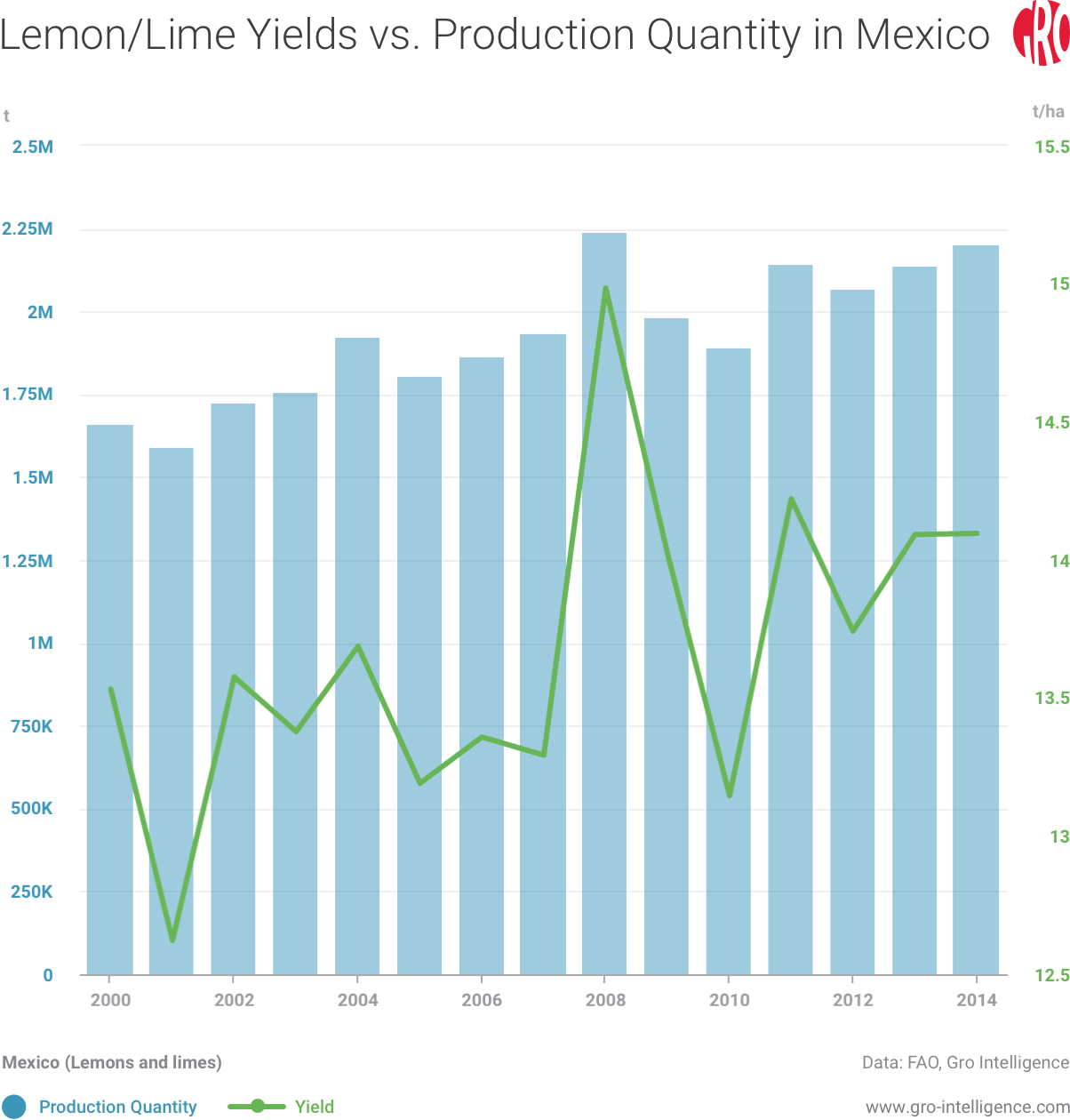 All major citrus-producing countries around the world have struggled with citrus greening in key production regions, although it has been more detrimental for Floridian orange producers. The example of US citrus production in Florida remains a constant reminder of how bad things can get when the disease isn’t proactively addressed.

Citrus greening first appeared in Florida in 2005 and has since spread to all major citrus growing regions in the state. Florida is the US’s largest producer of citrus fruit, worth a total of about $9 billion, and oranges take the largest share of this. Orange production and yield have both shown constant decline across the state in the past decade. 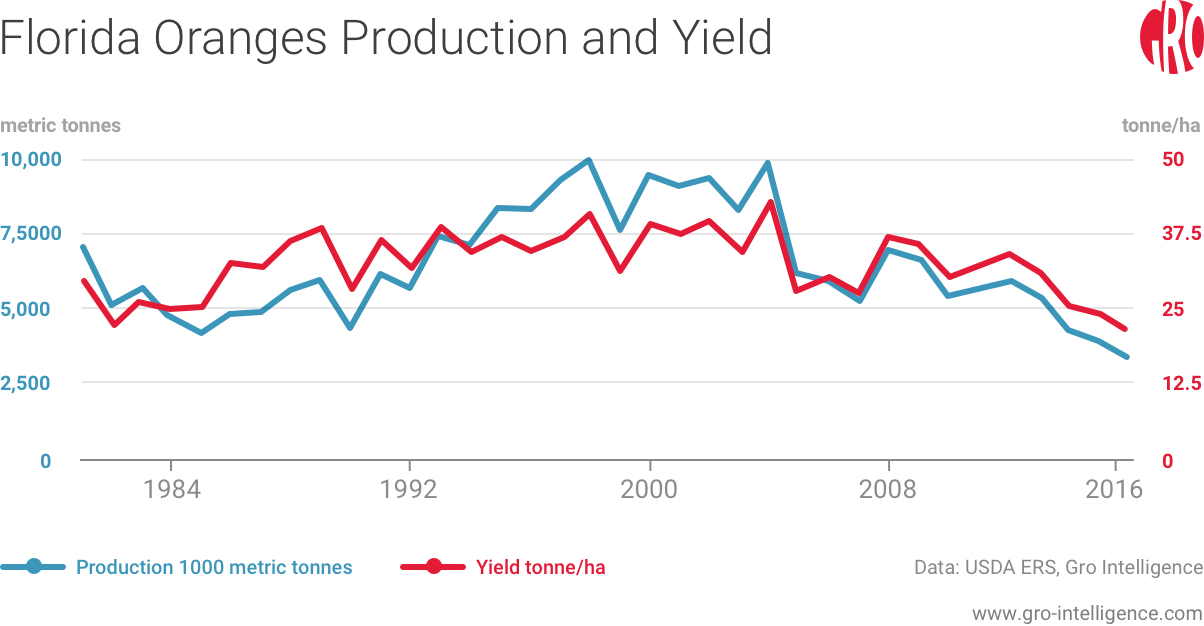 To add to Florida’s bad luck, this wasn’t even the state’s first run-in with a disease-induced citrus industry collapse. Florida had previously been a commercial producer of limes, but a 1995 outbreak of citrus canker, another major citrus disease, set off a chain of events that ceased commercial production of limes in the state. Tropical storms helped spread the disease, and the canker outbreak coincided with an infestation of citrus leafminer, which created additional entry points for the citrus canker. Eradication efforts failed to keep pace with the spread of the disease. Lime production had declined to the point where the USDA discontinued its commercial lime production estimates in 2002, and by 2006 canker eradication efforts were ceased once the disease became considered endemic to the region.

Citrus greening has advanced relatively slowly, preventing any drastic supply shocks from one year to the next, but production shortfalls caused by other challenges demonstrate just how much consumers can be affected by low supply. Heavy rains throughout major lime-growing regions in Mexico in 2013 led to a poor harvest and consequently low supply in early 2014. Mexican exports of limes to the US slowed to a standstill, leading retail prices of limes in the US to jump about 300 percent. The event made headlines in the United States leading up to the Cinco de Mayo holiday, as consumers were suddenly paying triple for limes for Mexican-themed parties.

A number of US media outlets reported that the shortage was due to violence in the state of Michoacan, where cartels and farmers were fighting over control of the lime trade. This made for great south-of-the-border crime reporting, but the story wasn’t completely true. There was cartel violence in Michoacan, but that state mainly produces Mexican limes for domestic consumption. Heavy rains in Persian lime regions were the main reason behind the price spike. 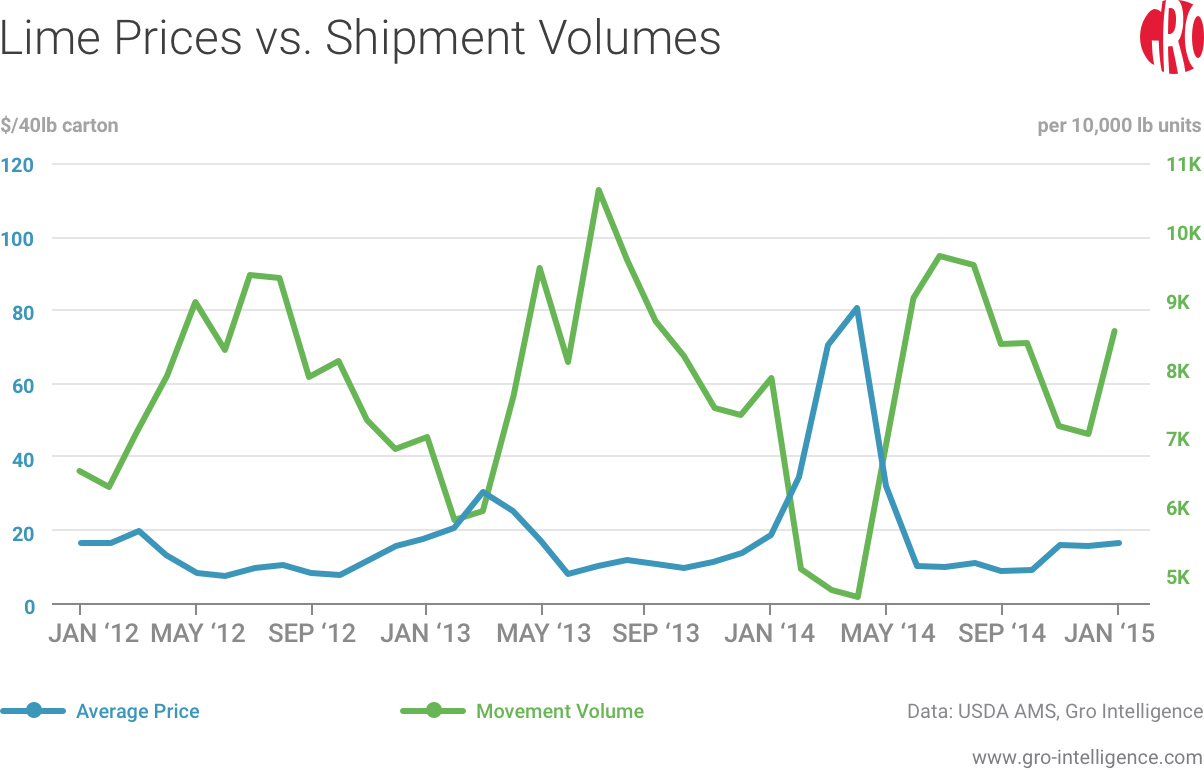 So far there is no known cure for HLB, although researchers have been pouring more resources into solving the problem. In January 2017, the USDA’s National Institute of Food and Agriculture (NIFA) awarded $13.6 million in grants to four research institutions working on cures for the disease. The four research groups will each work on a different solution: gene editing to develop disease-resistant varieties (i.e. creating genetically engineered citrus trees); creation of a chemical bactericide; harnessing naturally occurring soil bacteria to control the citrus psyllid; and chemotherapy treatments.

While these research projects are underway, the industry has already found several partial solutions, including new tree varieties, the application of new bactericides, and even the release of parasitic wasps to kill citrus psyllids.

The global citrus industry’s challenges with HLB are nothing new. Since its inception, agriculture has battled threats from disease. While we now have tools like agrochemicals to help fight the disease, pathogens can much more easily wreak havoc on a global scale in an era that relies on monocultural crop production and intercontinental trade. One of the best examples of this risk is the near-extinction of the Gros Michel banana in the 1950s and 1960s due to Panama disease, which caused the whole industry to shift to the hardier but less tasty Cavendish banana, the most widely grown variety today.

In the banana example, growers had the option to switch to a new variety, but this option isn’t viable for citrus growers since HLB affects all citrus varieties. The industry could then follow the example of another tropical fruit, the papaya. Growers in Hawaii switched to a genetically engineered (GE) variety resistant to ringspot virus after a severe outbreak in the 1990s. Today, about three-quarters of papayas grown in Hawaii are the GE rainbow variety after their introduction to the market in 1998. Despite their commercial success, the state has been heavily embroiled in conflicts over GMO legislation. Mexico has had its own legal back-and-forth with GE maize, and it’s unclear whether the industry would embrace GE lemons and limes if citrus greening continues to expand in the country.

Rightly or wrongly, consumers have serious misgivings about GE crops, but in the case of lemons and limes in Mexico, the alternatives—increased usage of agrochemical bactericides, or letting citrus production shrink across the country and watching prices spike—seem hardly more appealing. Other lemon and lime producing regions could try to pick up the slack, but with HLB attacking citrus groves around the world, there’s no guarantee any region will be able to shelter itself from an epidemic. 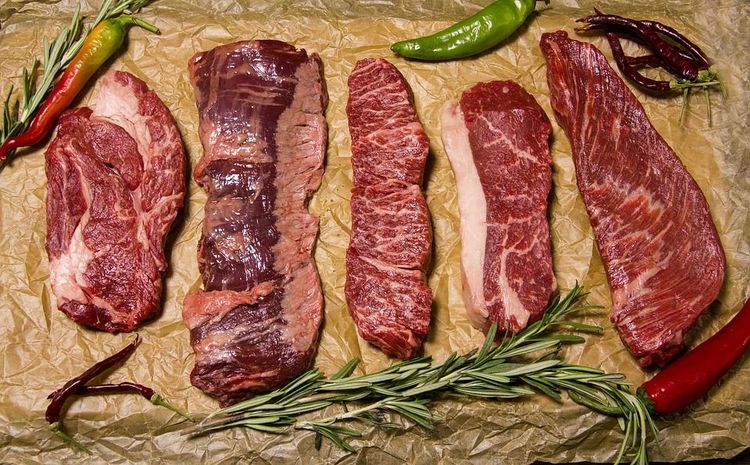 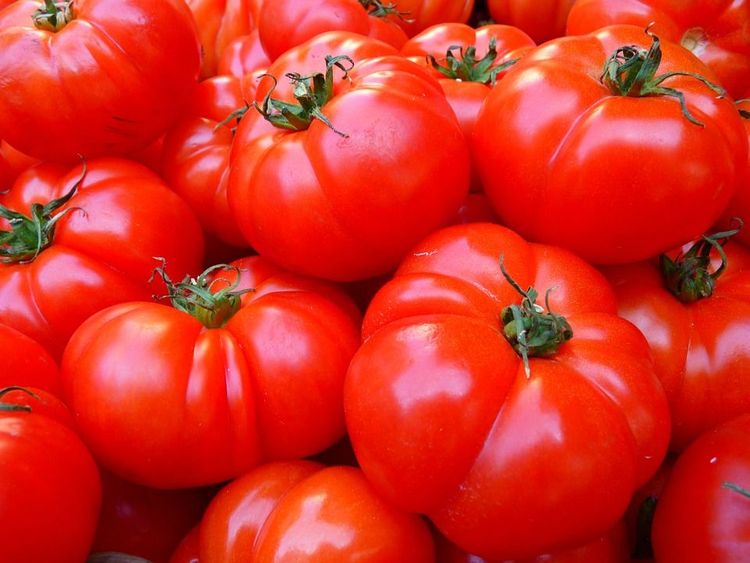 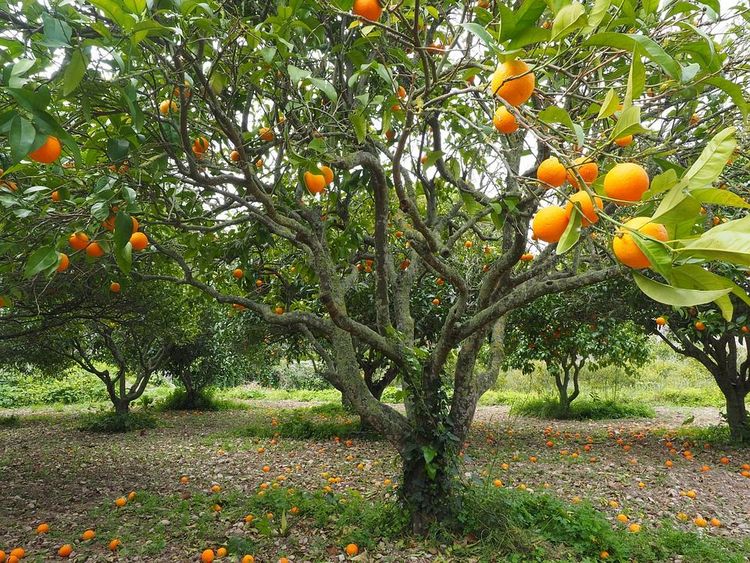