The makings of the United States' Green Revolution

Between 1860 and 1940, US maize yields remained largely unchanged, hovering around 1.6 tonnes per hectare. Production would dip in certain years due to drought or weather damage and then recover. It was not until the 1950’s that yields really started to improve. Assisted by various pieces of legislation, US farming changed during and after the Dust Bowl in the ‘30s: Mechanization improved productivity, the Agricultural Adjustment Act (which set up a system of subsidies) and Federal Crop Insurance Act provided greater stability to farmers. Additionally in that period, two world wars created a larger market for food exports. 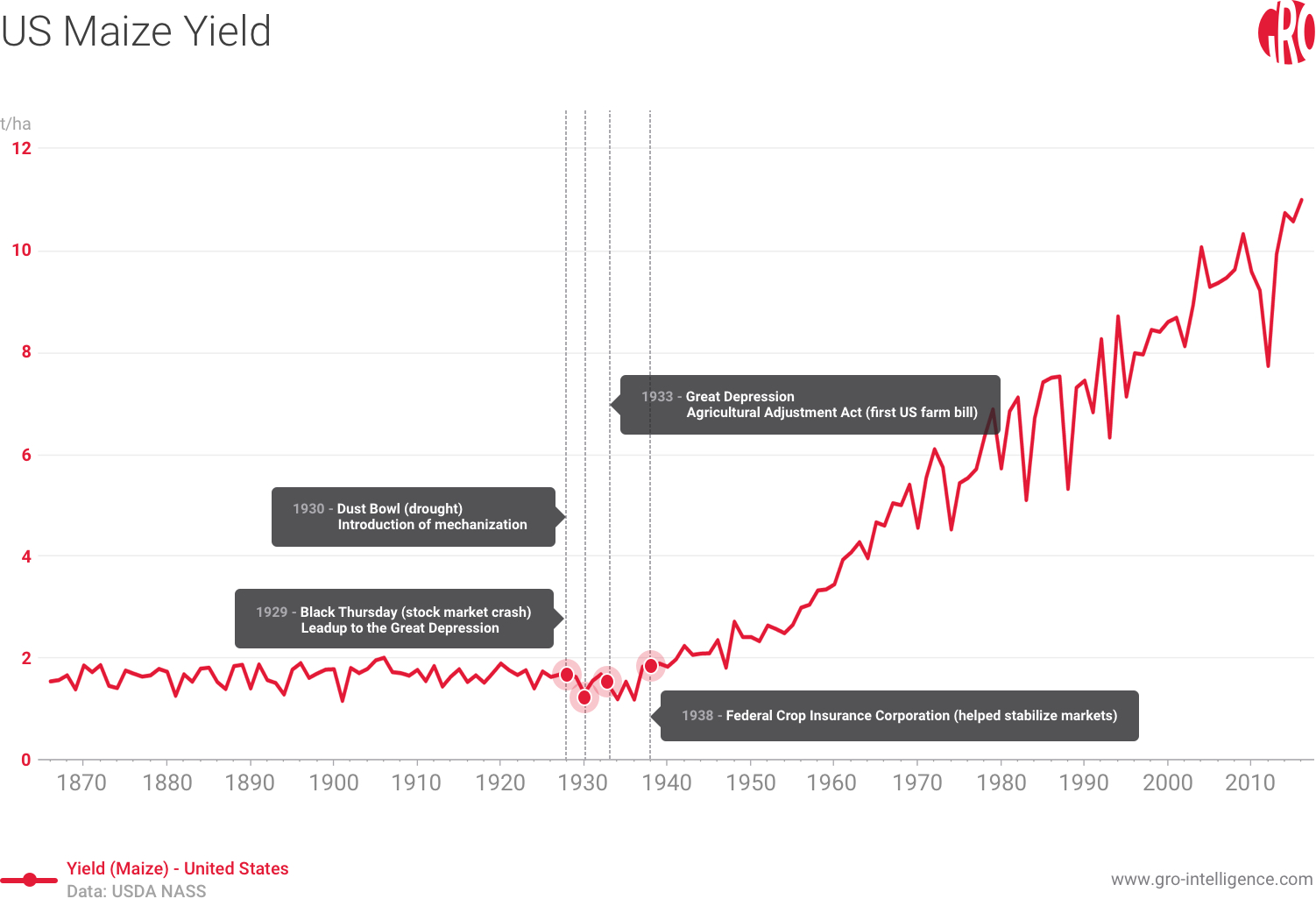 These changes put the United States on the path of much greater productivity, which really took off by ‘50s. US farmers started to adopt hybrid seed maize during World War II, and their interest accelerated through the decade. Starting in the ‘60s, US farms began to consolidate, producing economies of scale that brought down the marginal costs of growing additional crops. The Green Revolution began in earnest then too, bringing the aspects of modern farming that we’re now familiar with: greater use of mechanization, fertilizers, pesticides, hybridized seeds, and more.

Currently, the largest maize producers in sub-Saharan Africa are only about as productive as the US was before its Green Revolution (and at the peak of the Great Depression).The most productive African countries, South Africa and Ethiopia, are producing at US yields around 1960. The other major producers (Côte D’Ivoire, Kenya, Nigeria, Tanzania, and Uganda) are roughly producing at US rates before the 1950s. Even if these represent improved yields relative to previous decades, they’re still at the United States' pre-Green Revolution rates.

Here’s another angle to consider: the United State's population in 1930 was 123 million; Africa’s population today is around 1.21 billion. By the 1930s, the US managed to produce the same amount of maize that sub-Saharan Africa is producing today, to feed just one tenth of the people. 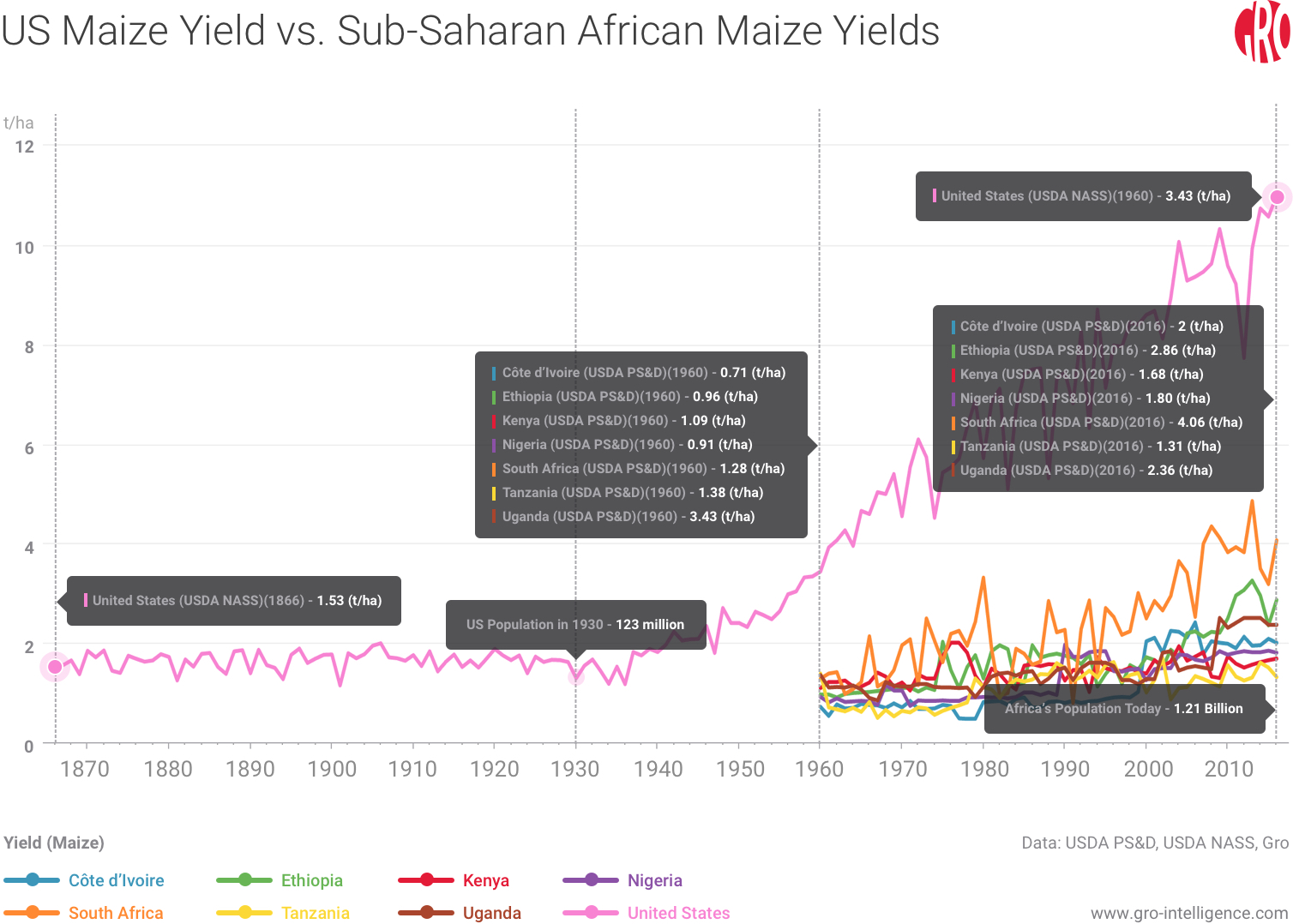 The productivity is still lower than you might think

Africa has significantly increased total agricultural production since a half-century ago. But it’s done so in a not-so-scalable way. Instead of increasing the productivity per acre, the greater production has come from increasing cultivated land. Thus countries have largely avoided tackling the problem of low productivity gains.

The challenges will become apparent soon. After a significant ramp up, sub-Saharan Africa is already dedicating as much land to growing maize as the United States is. But whereas the US is producing nearly 400 million tonnes of maize, Africa is producing only around 60 million tonnes. African farms are producing at less than a sixth of the yield of farms in the US. 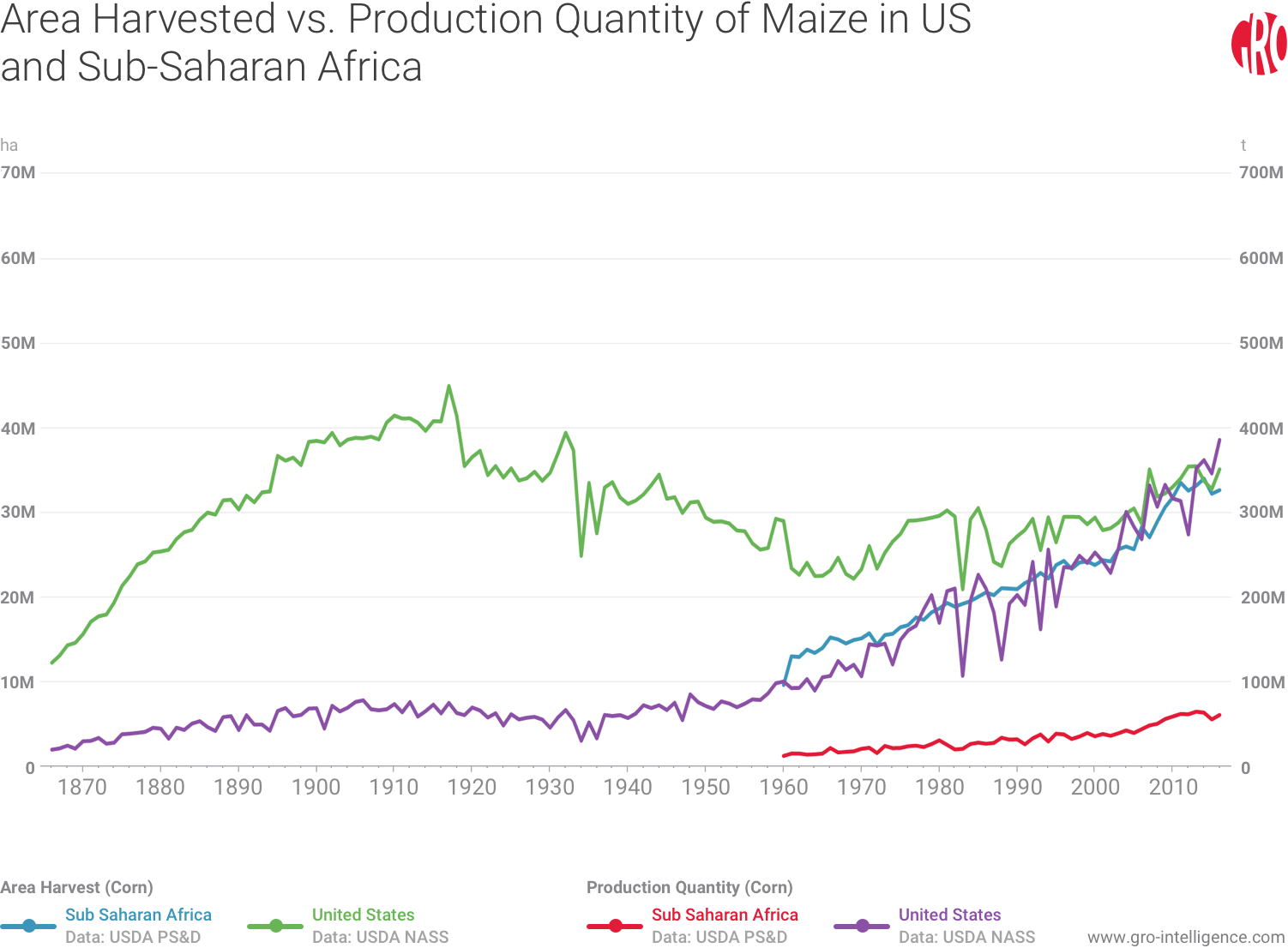 The continent can’t rely on cultivating new land forever. The sooner it deals with closing the productivity gap, the sooner it can intensively raise yields for more sustainable growth.

It’s worth noting that the US went through a similar trajectory: first dedicating a lot of land to maize, and only later on significantly increasing yield per hectare. The higher productivity meant that the US could diversify its crop base. The same thing will happen to Africa once its growth hits an inflection point.

Africa’s trajectory: Where do we go from here?

Africa faces unique challenges in improving yields. First of all, Africa consumes a more diverse range of crops. Staple crops include maize, wheat, beans, cassava, millet, rice, teff, sorghum, and more. It was simpler to make a Green Revolution work in other regions of the world, because fewer staple crops (like rice, maize, and wheat) dominate. To dramatically improve yields, researchers have to develop better strains for many Green Revolutions, nearly one for each of these major crops.

Another challenge is the lack of infrastructure. Too many rural roads are poorly maintained—if they exist at all—and it’s difficult to move large quantities of crops on them. Only about 4 percent of the arable land in sub-Saharan Africa is irrigated, leaving farmers exposed to the whims of the weather to determine annual crop production.

Mitigation of weather risk is possible if a large enough crop insurance market existed that allowed farmers to access reasonable crop insurance premiums and for banks to access insurance against loans that they extend. And yet another example of a more general constraint, sub-Saharan Africa doesn’t have anywhere close to the number of weather stations needed to support the development of insurance and credit products for small- or large-scale agriculture. Sub-Saharan Africa has 35 times the landmass of Texas, and roughly the same number of weather stations. The continent’s under-investment in weather stations is especially significant given that 65 percent of its labor force is employed in agriculture. 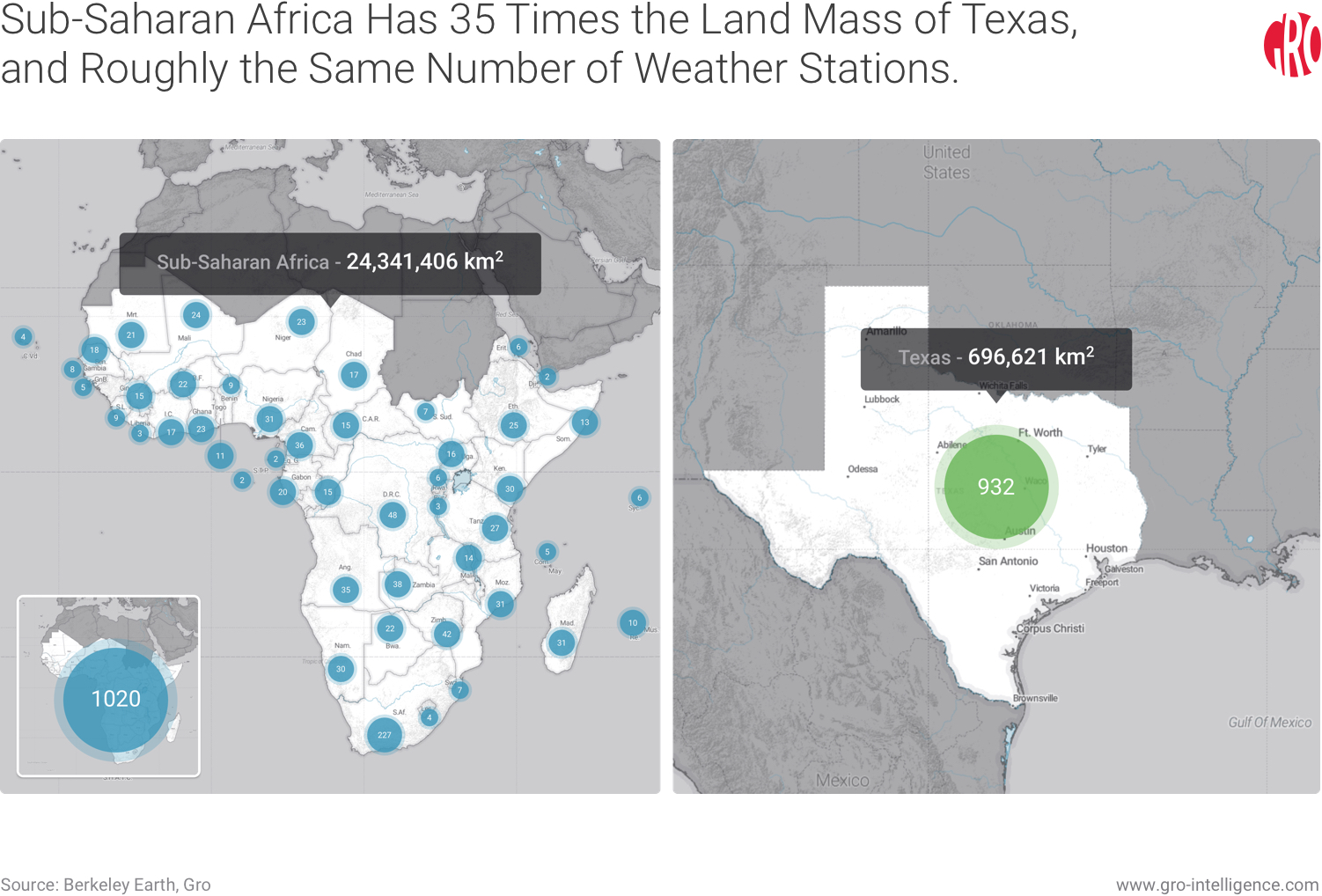 Nonetheless, we’re optimistic for sub-Saharan Africa’s outlook. Not only can the region increase productivity, with the right investment and policy support, there’s every reason to believe that it will reach large yields faster than the US did. There are many technologies and best practices on improving productivity that sub-Saharan Africa can adopt from Green Revolutions across the world. At the same time, new innovations are being created at unprecedented rates.

Sub-Saharan Africa does not have to follow the same trajectory that the United States went through starting in the 1930s. Instead it can grow even more quickly, by adopting the cutting-edge technologies that the most productive countries are using and adapt them to local conditions. Hybridized seeds that grow well in one part of the world won’t necessarily in any other. Major seed companies that tailor seed varieties to the continent, as well as fertilizer companies, will find a growing market. When these commercial efforts are coupled with the right government policies, the time it will take to achieve an African Green Revolution can be substantially less than the time it took the US.

Productivity will increase as countries adopt these technical improvements. That’s to say nothing of the social developments that are possible. Land reform can offer greater ownership right to farmers, making it more likely that they invest in better practices. A greater market for crop insurance can make it more likely for farmers to break out of tradition and adopt new practices. And better use of data can reduce the information asymmetry that increases the power of middlemen relative to the positions of farmers.

The future for African agriculture is promising. When the Green Revolution properly takes off in Africa, its growth curve will be steeper than that of the United States'.

But that’s still no reason to take growth as a given, or to delay it any further. To acknowledge that sub-Saharan Africa has significant room to grow, we first have to realize that it hasn’t increased productivity a great deal in the first place.

Most importantly, African governments have to make the right investments to put agricultural markets on a better footing. There need to be more weather stations to reduce crop risks; more roads to get crops to markets; more land reform to encourage farmers to act as owners; greater use of fertilizers to increase production; more investment in agricultural education and research and more of an acknowledgment that farming is important to the continent’s future by having governments dedicate significantly more capital and resources to the sector.

The combination of these mostly government-driven acts will reduce the cost of capital across the entire continent, unlocking access to finance that fuels growth across the entire agricultural value chain. After all, let’s not forget the critical role that US government continues to play in helping propel the Green Revolution that we take for granted.