As far as soybean production goes, the only country that can hold a candle to the US is Brazil. Brazil already leads global soybean exports, which have increased 50 percent since 2016. The USDA’s December WASDE report revised Brazil’s 2019 projected export volume up 4 million tonnes to an eye-catching 81 million tonnes, driven almost wholly by Chinese demand.

China routinely purchases huge quantities of US soybeans, but has shunned that country’s suppliers this year over ongoing trade qualms. In the interim, the US has sought out other markets to sell soybeans to including Mexico, the EU, and Argentina. The confluence of two major factors—China’s 25-percent tariff on US soybeans and the weakening real—has made Brazilian beans attractively priced to China in 2018. In the three months through November 2017, the US exported roughly 17 million tonnes of soybeans to China. But for the same period this year, exports were below 350,000 tonnes. By contrast, since the trade dispute between the US and China began in July, Brazil has sent nearly 8.6 million tonnes more soybeans to China than during the same period in 2017.

Cumulative soybean exports from the US for the past three years (right chart), beginning with the September start of the marketing year, shows the impact of stalled shipments to China in 2018 as a result of the US-China trade dispute (blue line). By contrast, Brazil’s monthly soybean export totals hit a peak in 2018 (green line in the left chart). The red line shows how Brazil’s most recent exports were dominated by shipments to China.

Brazil enjoyed bumper crops in both 2017 and 2018, which swelled soybean stocks. At the start of 2018, Brazil sat on enormous stocks of soybeans. Exporters wasted no time taking advantage of the surplus. Unclear, however, is what volume of soybean stocks Brazil still has left in reserve. This month’s USDA WASDE report revised Brazil’s beginning stocks up an additional 1.6 million tonnes, which begs the question, where are those additional soybeans coming from? Abiove, Brazil’s vegetable-oil industry association, announced last week a historical revision to 20 years of soybean stocks data, including a 5 million tonne increase to Brazil’s beginning stocks for 2018. Domestic consumption figures are often unclear, farmers don’t report stocks on hand, and Brazilian crushers’ stock data are typically delayed. These issues contribute to data lags and revisions with regard to soybean stocks.

Tight supplies have forced Brazilian crushers to work with negative margins since late September which has slowed the pace of soybean processing. Lucrative export opportunities left Brazil operating with limited supplies in early October to such an extent that Brazil imported 1 million tonnes of cheaper US soybeans to meet domestic demand.

Brazil’s soybean production in 2018/19 is expected to reach a record (blue bars). Other bars show the contributions made by Brazil’s top five soybean-producing states.

Brazil is poised to harvest a record soybean crop in 2019, and an atypical early harvest could mean competition for stagnating US soybean stocks. Early rains in parts of Brazil during the planting window got the ball rolling sooner than expected. By late November, soybean planting was 89 percent complete in Mato Grosso, significantly ahead of the five-year average of 78 percent. Harvest typically begins in late January and takes off come February. This year, however, harvest in some areas is likely to begin over the next couple of weeks; at least 5 percent of soybeans should be out of the ground by the first week of January and 20 percent by the end of January. With that schedule, nearly 25 million tonnes of soybeans could be available for sale next month.

NDVI satellite data, an important indicator of vegetative health, shows that Brazil’s soybean crop hasn’t been overly stressed by hot and dry conditions that recently hit the southern part of the country.

The December WASDE report revised Brazil’s 2019 soybean production up 1.5 million tonnes to a record setting 122 million tonnes, but the true size of the crop will not be known for the next couple of months. Conditions have been optimal in Mato Grosso state, which produces roughly 27 percent of Brazil’s soybean crop, and early harvesting is expected to begin during the second half of December. However, the story is different in other parts of the country. Parana, Brazil’s second-largest soybean-producing state, has had inconsistent rainfall over the summer and is currently in the midst of a dry spell along with other states in south Brazil. Rains returned at the end of last week to the relief of some farmers, but weather variables and NDVI will be important to monitor over the next month as the pod-filling stage begins. Weather and soil conditions during this period are generally considered to be the best predictors of yield as the crop comes into harvest.

Brazil’s geographic position gives it a shipping advantage to China over the US. It’s cheaper to ship soybeans from Brazil’s Parangua port, and around the Cape of Good Hope, than from the US Gulf. Free on board (FOB) export prices for US soybeans transported from the Gulf plummeted in June when the trade war began and declined even further when it became apparent that a US bumper crop was coming into harvest. At the same time, Brazilian FOB export prices began to climb as China scrambled to fill demand by buying Brazilian soybeans, which are priced at a premium. Today, US and Brazil prices look to be converging again, primarily due to optimism that the US-China trade dispute will be resolved in the coming months. But the Chinese tariffs on US soybeans persist, and Brazil remains the more financially logical option for the time being.

The free on board (FOB) export price for soybeans shipped from the US (green line) and from Brazil (blue line) diverged in June when the US-China trade dispute picked up steam. Lately, the prices have begun to to converge amid expectations for a resolution of the trade war.

At this time, Brazil claims to be prepared for any outcome. Outgoing Agriculture Minister Blairo Maggi said a US-China tariff ceasefire would bring greater transparency to the currently tumultuous soybean market and bring trading prices back to a normal baseline.

Going forward, Brazil shows no signs of curbing its soybean expansion. Although 2018 saw a record low deforestation rate in the Cerrado savanna, an environmentally sensitive region that has experienced agricultural conversion, Brazil’s President-elect Jair Bolsonaro has said he plans to roll back protections that he sees as economic barriers. In the 1980s, a wildly successful liming operation proved that the acidic soils of tropical Brazil could be converted to arable land. Mato Grosso, which means “thick bushes” in Portuguese, makes up part of Brazil’s western border and contains lush expanses of Amazon rainforest and Cerrado savanna, two densely vegetated ecosystems that are increasingly under threat from agricultural expansion. Today, Mato Grosso, Brazil’s third-largest state, is far and away Brazil’s largest grain and oilseed producing state.

Brazil has been sharply expanding its planted area dedicated to soybeans (right chart), often at the expense of environmentally sensitive land. The map on the left illustrates the relative concentration of dedicated soybean acreage in each of Brazil’s soy-growing states. Darker blue shading indicates more acres in soybeans.

The duration of the US-China trade dispute is difficult to predict, although markets are gradually factoring in some sort of resolution. On Dec. 1, the two countries agreed to postpone planned tariff increases for 90 days. US Agriculture Secretary Sonny Perdue expects Chinese purchases of US soybeans to resume at the start of the new year, but markets are waiting to see hard evidence of this. Last week, China purchased 1.19 million tonnes of soybeans from the US, perhaps signaling a thaw in the ongoing dispute.. On Monday, President Trump announced that a planned second round of payments to US farmers will be realized, offsetting in part their economic pain from the trade war. So, while most people continue to scratch their heads over when a deal with China will be made, US soybean farmers will be receiving some relief.

Timing will likely determine the winners and losers between the US and Brazil to see who will take the mantle of China’s primary supplier over the next few months. If the trade spat is not solved before the first of Brazil’s soybean crop is out of the ground, Brazil will have a replenished supply to sell to China and could significantly cut into the traditional US share of the Chinese market for 2019. On the other hand, if the US and China are able to resolve their differences, the US will be highly motivated to offload its mountain of soybean stocks that have built up these past months. 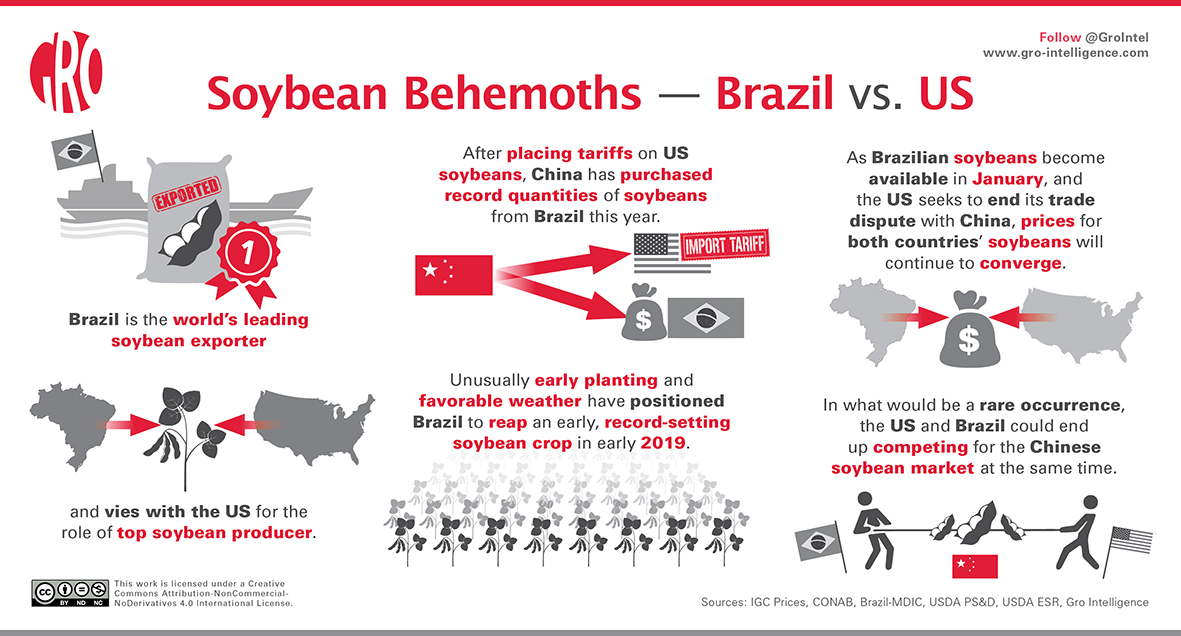