Nigeria’s long-standing policy of import substitution—essentially banning or imposing steep tariffs on food imports to encourage domestic production—seems to have had some positive impact on the country’s rice industry, the most recent data shows. More area planted to rice, higher productivity, and better milling-operation capacity have helped boost rice production to an expected 4.78 million tonnes in 2018/19, says the USDA. That represents a 2.5-percent gain from the previous year, and is up from 3.03 million tonnes in 2013.

That’s still hardly enough to satisfy domestic consumption, however, which is forecast at 7.5 million tonnes for 2018/19, up 5.5 percent from 2017, mainly due to population growth and consumers shifting away from traditional cassava and yams. Rice imports for 2018/19 are expected to reach 2.5 million tonnes, an increase of 25 percent from last year, but are well below a peak of 3.4 million tonnes in 2011. Imports have been difficult to control, says the Nigerian government, especially across land borders.

Boosting agricultural production has been a focus in Nigeria, a net food importer, over the past few decades to spur economic growth in a country that is very dependent on its petroleum exports for revenue. The Nigerian government currently imposes an import tariff of 10 percent and a levy of 60 percent, for a total of 70 percent, on imported rice.

Meanwhile, imported wheat is subject to a 5-percent tariff, and an additional 15-percent levy, for a total import duty of 20 percent. But unlike rice, wheat production has been static. The USDA forecasts Nigerian wheat production to stay at 60,000 tonnes in 2018/19, unchanged from the past few years. Consumption, on the other hand, is expected to increase 4 percent from 2017 to 5.06 million tonnes. Wheat production is restricted by the country’s struggles with the extremist group Boko Haram, which is limiting farmers’ access to the main wheat growing regions. Wheat imports for 2018/19 are forecast at 5.4 million tonnes, an increase of 4 percent from last year.

Import duties have helped Nigeria boost rice production as domestic consumption rises. Wheat production is still struggling, however, mainly due to limited access to key wheat-growing regions, and the country must import large quantities of wheat to meet consumer demand. The charts above show milled rice (on the left) and wheat (on the right), with consumption (red lines), imports (blue lines), and production (green lines) for each commodity.
Share 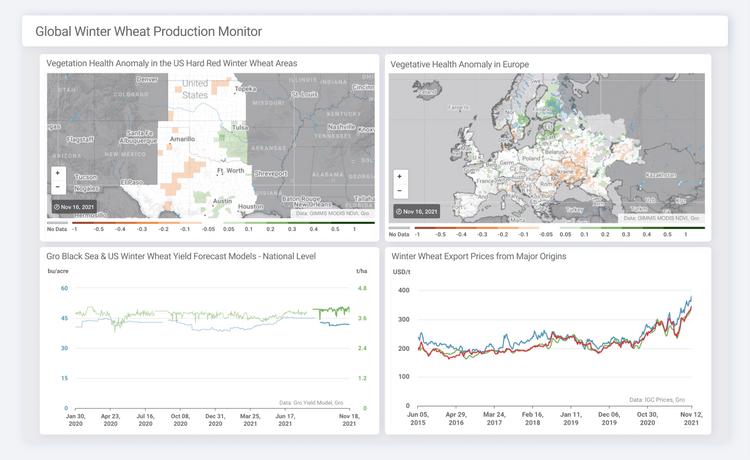 Blog
Predicting Wheat Yields in Australia, a Country Increasingly Affected by Drought
Get a demo of Gro
Talk to our enterprise sales team or walk through our platform
Request a demo