US Farm Aid Plan Could Shift More Acres Into Soybeans

US Farm Aid Plan Could Shift More Acres Into Soybeans

The Trump administration’s plan to inject $16 billion into the US farm economy is expected to increase the number of acres planted to soybeans this year. It also throws a lifeline to growers struggling under the weight of export tariffs amid the US-China trade conflict.

However, the bailout also could add to the already sizable glut of US soybean stocks, which could in turn depress market prices.

The USDA announced the farm aid package Thursday as a means of offsetting retaliatory tariffs placed on US agricultural products by China. How the payments would be calculated wasn’t detailed, and it isn’t clear if payments would be made on a per bushel basis or by some other means.

“After careful analysis by our team at USDA, we have formulated our strategy to mitigate the trade damages sustained by our farmers,” US Secretary of Agriculture Sonny Perdue said in making the announcement.

The presentation of this year’s announcement appeared similar to last year’s aid package, which featured direct payments to farmers of $1.65/bu for soybeans and 1 cent per bushel for corn. The timing was very different, however. Unlike last year, when the dollar amounts of each commodities’ aid programs were not announced until August, this year’s announcement comes in time for farmers to change which crops they plant. As it happens, farmers are behind on their corn and soybean plantings, giving them more of an opportunity to lean into USDA’s benefits.

Farmers were 49% planted in corn as of Monday, May 20, which is 31 percentage points behind their five-year average for the week. They were 19% planted in soybeans as of Monday, also significantly behind the 47% five-year average for the week. Assuming reasonable progress during the current week, there may still be as much as a 15% shift away from corn acres for soybean acres. That number, equal to 12.5 million acres, is half of the absolute maximum numbers of acres that are still available to be shifted, and represents a reasonable estimate.

Under the plan, subsidy payments won’t benefit farmers unable to plant because of extreme wet conditions in the US Midwest. 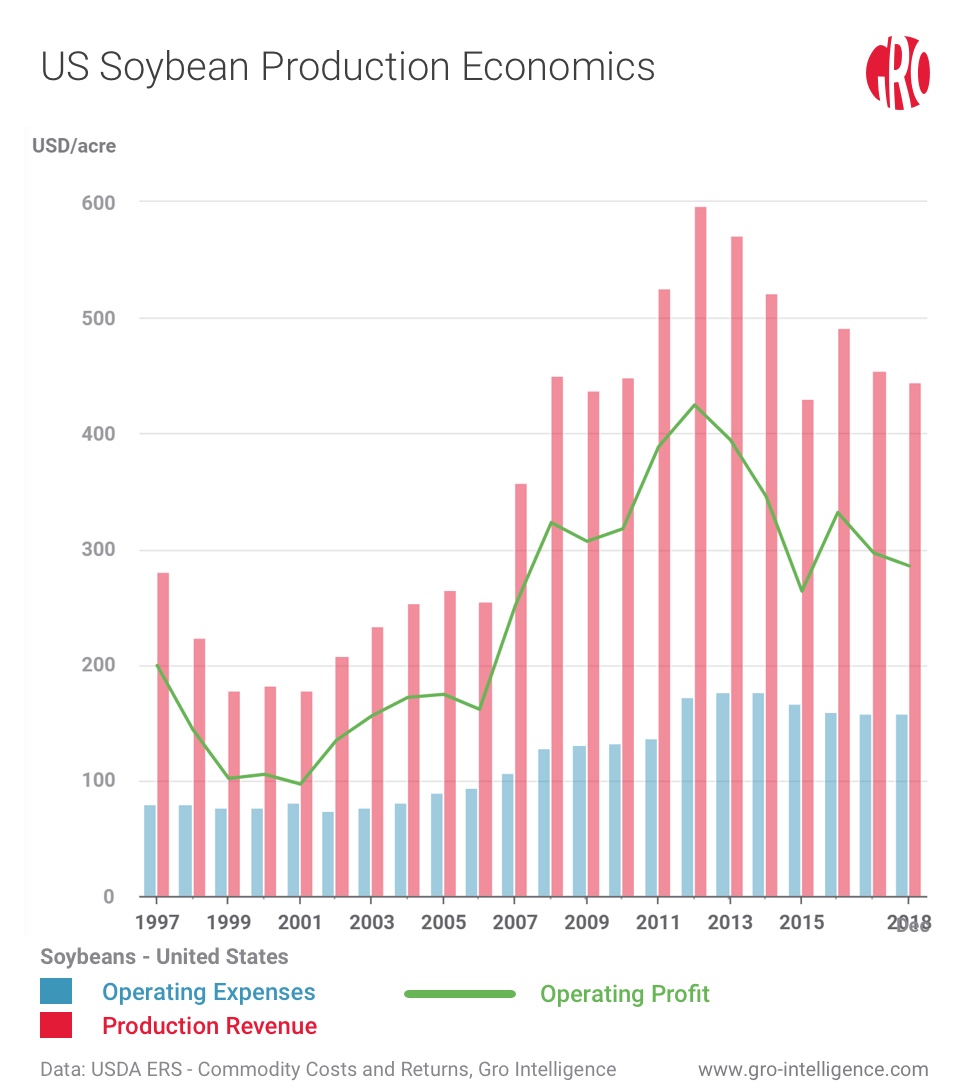 Operating profits have been falling for US soybean farms since peaking around $425 per acre in 2012.

The subsidies have the potential to make a difference for soybean production economics. In 2018, producing soybeans generated an average of $445 per acre. This year, with yields expected to fall to 45.4 bushels per acre, according to the Gro Intelligence yield model, from 51.6 bushels per acre in 2018, the outlook for producers had been looking especially grim. At current prices, producers would only expect to receive $372 per acre in revenue for their 2019 crop. A subsidy equal to last year’s $1.65 per bushel would raise expected revenue to $447 per acre, more than offsetting the decline in soybean prices and yields from 2018.

A subsidy of $2 per bushel of soybeans, which was recently rumored, would increase expected production revenue to $463 per acre, Operating expenses, which include inputs such as seed, fertilizer, feed, and chemicals, are forecast by the USDA to be $163 per acre in 2019, essentially unchanged from the $160 per acre incurred in 2018. Therefore, a $2 per bushel subsidy would lead to a nearly 50% increase in average operating profit for US soybean producers.

Any additional acreage moved into soybeans would likely add to currently large supplies. The USDA in May projected soybean ending stocks of 970 million bushels, which would be the second highest ever.