What New US Subsidies Mean for Soybean Farmers

What New US Subsidies Mean for Soybean Farmers

At the start of 2018, the soybean market in the United States looked bright. Soybean acreage exceeded corn acreage for the first time in 35 years, fueled by greater Chinese demand and cheaper production costs compared with corn. That all changed with the imposition of Chinese tariffs and a slump in market prices.

To help farmers ride out the storm, the USDA last week rolled out the $12 billion Market Facilitation Program (MFP) for producers of key agricultural products, including soybeans, corn, cotton, dairy, hogs, sorghum, and wheat. Soybean producers will get the lion’s share of the relief package, with subsidies of $1.65 per bushel. The payments will be doled out in two rounds, with $0.825 per bushel administered beginning this week and an additional $0.825 per bushel later, if warranted.

The average US farm is approximately 442 acres and the current Gro Soybean Yield Model indicates an average yield of 50.9 bushels per acre, which shakes out to roughly $18,450 per farm for the first round of subsidies. MFP payments are capped at $125,000 per person or legal entity. A decision whether to proceed with a second round of MFP payments may depend on how trade conversations are progressing, but analysts expect China to maintain tariffs at least through the US midterm elections in November. At that point, the soybean harvest price will be known and a clearer image of how farmers will fare should emerge. Gro Intelligence makes soybean production and trade data easily digestible to help users navigate the ever-changing market landscape. 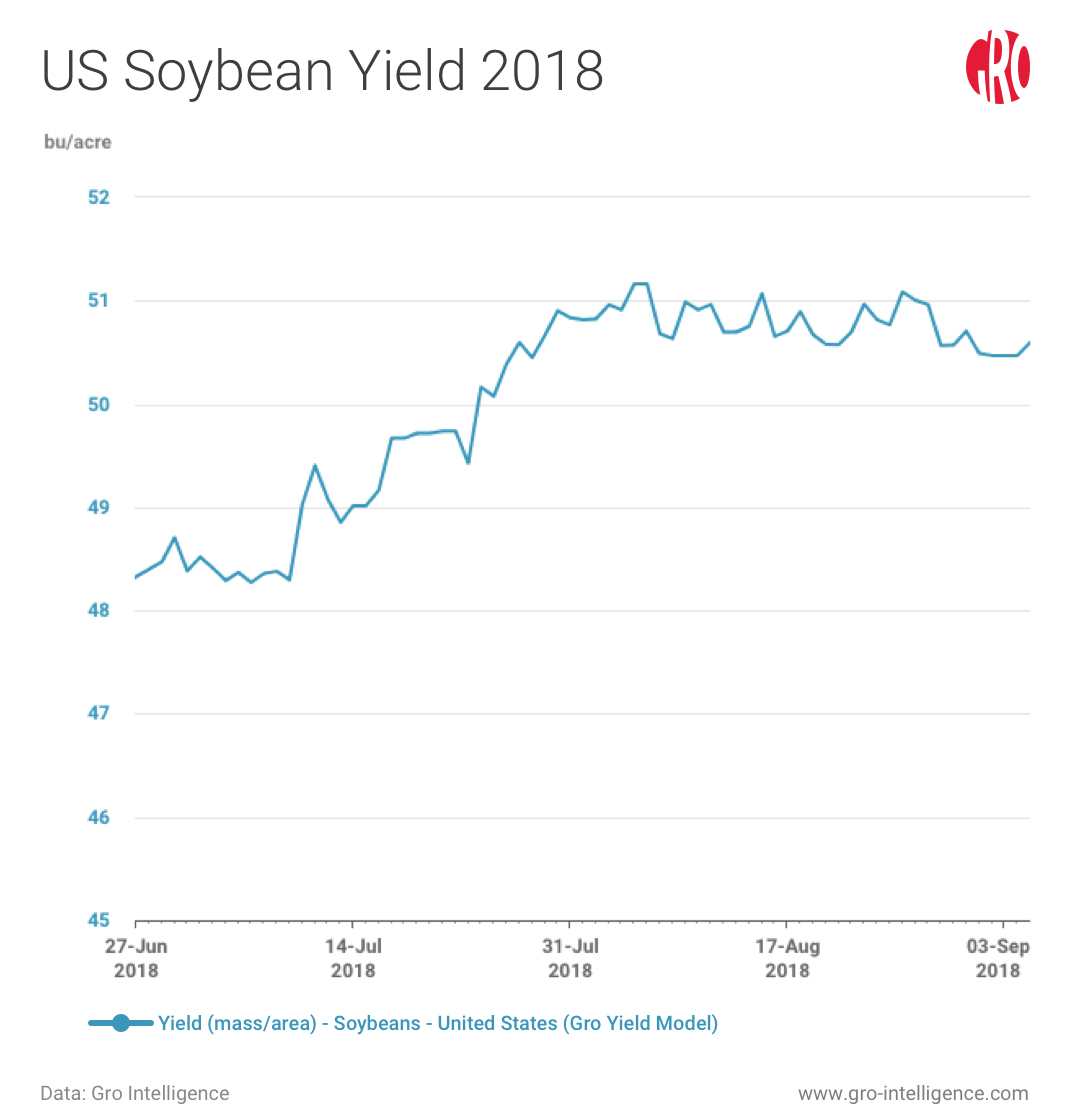 Some soybean growers remain optimistic, at least for this year. Around 50 percent of the soybean crop has been forward-contracted. That means many producers secured high prices for their crop last spring, which will help them weather the brunt of the trade war this year. John Heisdorffer, president of the American Soybean Association, suggests that the government subsidies will particularly benefit growers who did not forward-contract and could use the money to support financing next year’s crop.

Other government support programs, including Agriculture Risk Coverage (ARC) and Price Loss Coverage (PLC), are intended to protect farmers from falling commodity prices. However, crop-insurance payments are adjusted to reflect average market prices, and if prices continue to slide, farmer revenue will decrease as well. What is not known is how the current situation will affect next year’s crop insurance premiums, which farmers fear will rise accordingly if 2018 insurance payouts are large.

Most US soybean farms are insured with revenue protection, a policy that is activated when harvest revenue falls below the policy’s guaranteed revenue, at 80 or 85 percent coverage. These payments also are tied to market fundamentals, which doesn’t favor US soybean farmers. And, given this year’s expected bumper crop, high yields may disqualify many farmers from receiving crop-insurance payments.

At the moment, the majority of farmers are expected to break even or experience a loss. According to the USDA’s Economic Research Service, net cash farm income (NCFI) across the soybean farm sector is expected to decline by 8.8 percent this year, the fourth consecutive yearly decline. The agriculture sector overall is struggling with income; NCFI for 2018 is forecast to slide 19.9 percent from 2017 to an average income of $66,700 across farm businesses, the lowest level since 2009. After announcing the MFP subsidy program, US Secretary of Agriculture Sonny Perdue said the payments are not a cure-all and “will not make farmers financially whole again.” 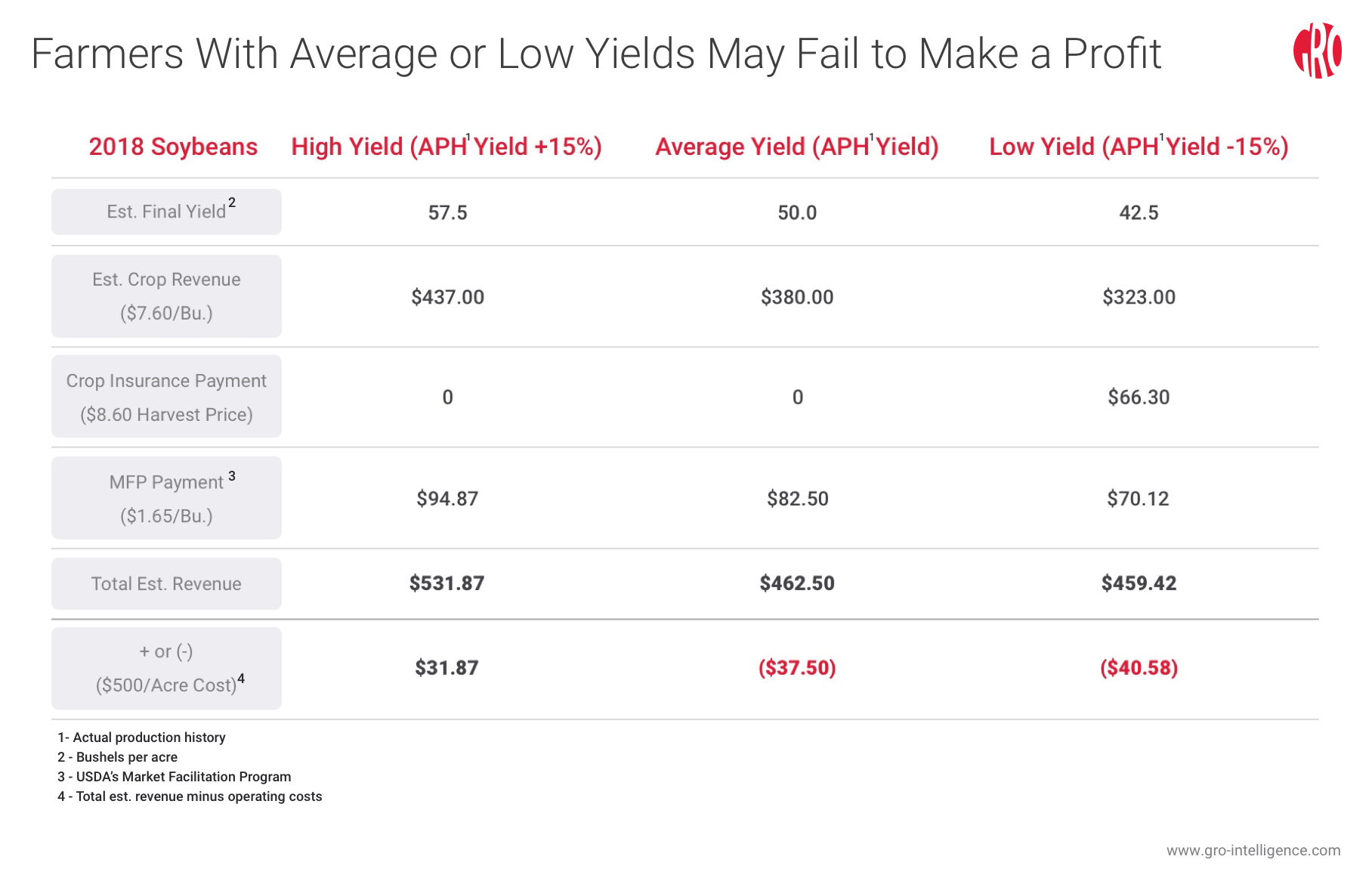 If the trade war continues into spring, forward-contracting the 2019 crop may fail to provide a security blanket to soybean growers. A new report by Farm Futures indicates a 2 percent reduction in 2019 soybean acreage planting intentions as farmers seek to diversify their crops to protect themselves against market volatility. Larger growers with greater profit margins and stable cash flow may be better positioned to endure the trade dispute as they can afford to carry their soybeans until prices rebound. Soybean stocks may reach an all-time high globally this year due to widespread market uncertainty.

Meanwhile, corn farmers have been stumped as to why corn payments through the MFP are set at a meager penny per bushel. The USDA’s official statement says the “payment rate will be dependent upon the severity of trade disruption and the period of adjustments to new trade patterns.” However, corn prices have also suffered in recent years, and this year’s crop nears a five-year low. Trade disputes have knocked corn prices by $0.44 per bushel, or an estimated $6.3 billion, and the National Corn Growers Association has been outspoken about the meager MFP payout. The prevailing theory for the USDA’s rationale is that high corn yields combined with reduced soybean exports will improve export prospects for corn. 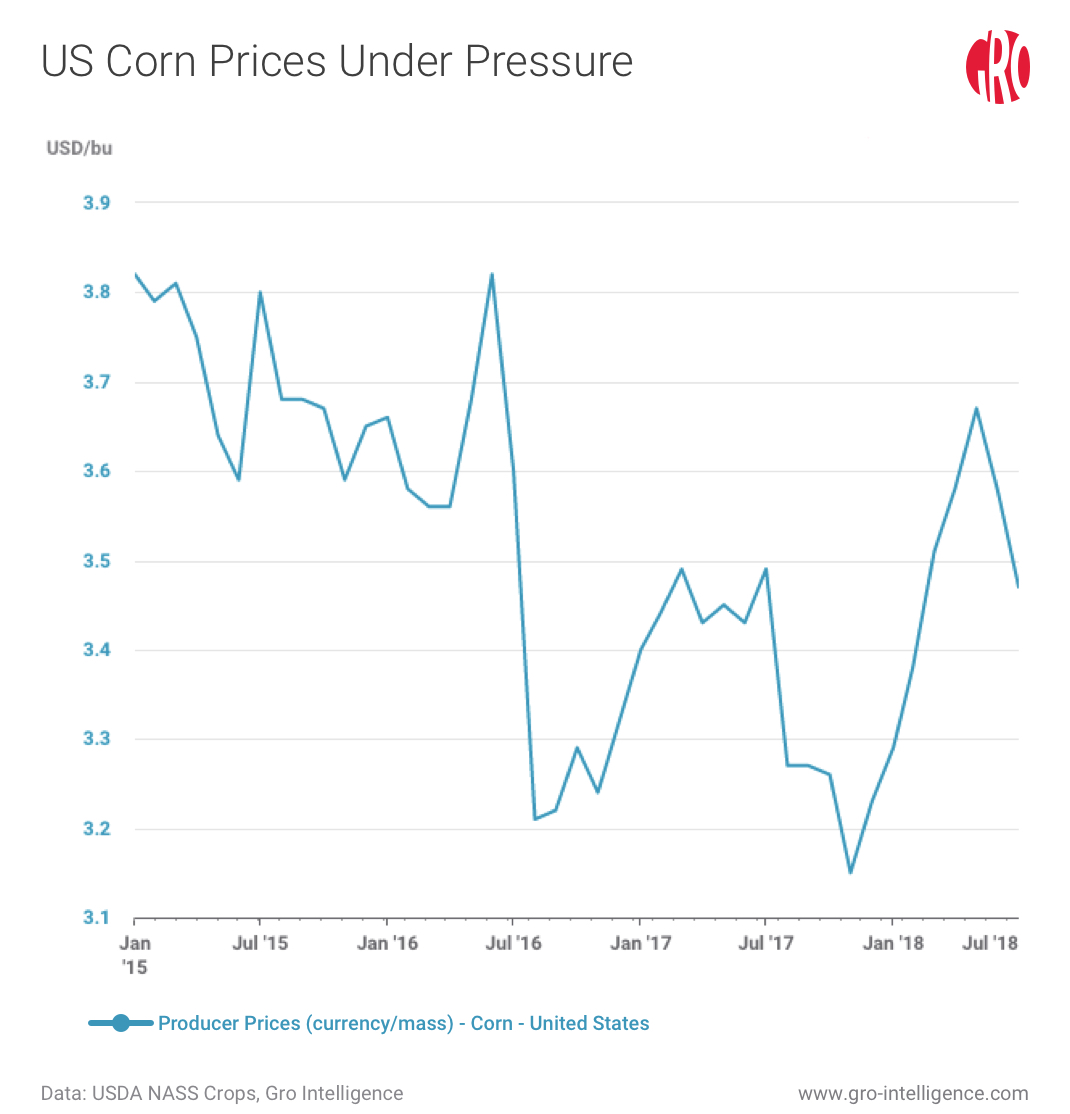 Corn producer prices, those that growers receive, have declined in recent months. Corn growers complain they are being shortchanged by the new US government subsidies.

Can China Do Without US Soybeans?

One question looms over the trade conflict—does China need soybeans from the US? The simple answer is no. According to data from both the USDA’s most recent WASDE report and the Chinese government’s parallel CASDE report, the world’s most populous country is set to import over 95 million tonnes of soybeans in the 2018/19 marketing year, or nearly two-thirds of the globe’s total exports. Despite this, China since July has been canceling soybean shipments and reselling committed shipments to Iran and Bangladesh. In 2017, the US accounted for 32 million tonnes of Chinese imports and Brazil accounted for 53.2 million tonnes, with the remainder coming largely from Argentina. Yet soybean farmers in Brazil face a mix of strict regulations and strong incentives not to cultivate new farmland. Some analysts predict that Brazil, with increasingly tight constraints on soybean output, might import soybeans from the US for its own domestic purposes in order to ship more to China. 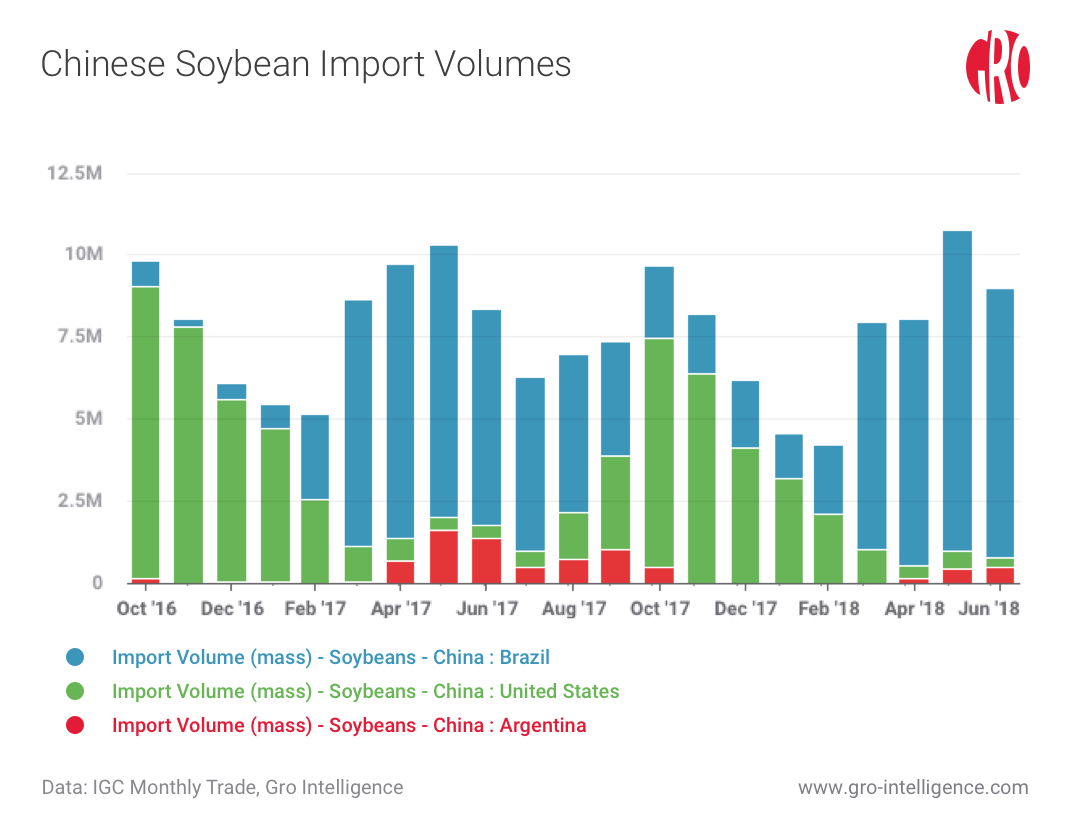 The US, Brazil and Argentina account for the bulk of China’s soybean imports. But the countries alternate seasons because of different harvest times between North and South America.

China does produce significant amounts of soybeans itself. But its 2017 domestic supply of 14.2 million tonnes barely covered the country’s total human consumption of 12.1 million tonnes. The question of whether China will ramp up domestic soybean production is not even worth considering in the larger picture of US planting intentions. That being said, last month Russia offered 2.5 million acres of arable land to China and other foreign investors in a possible bid to grab a large share of the US soybean market. If China takes Russia up on its offer, the agreement could represent a shift toward greater self-sufficiency for soybean demand, and US farmers’ fear of losing their market share may be realized. 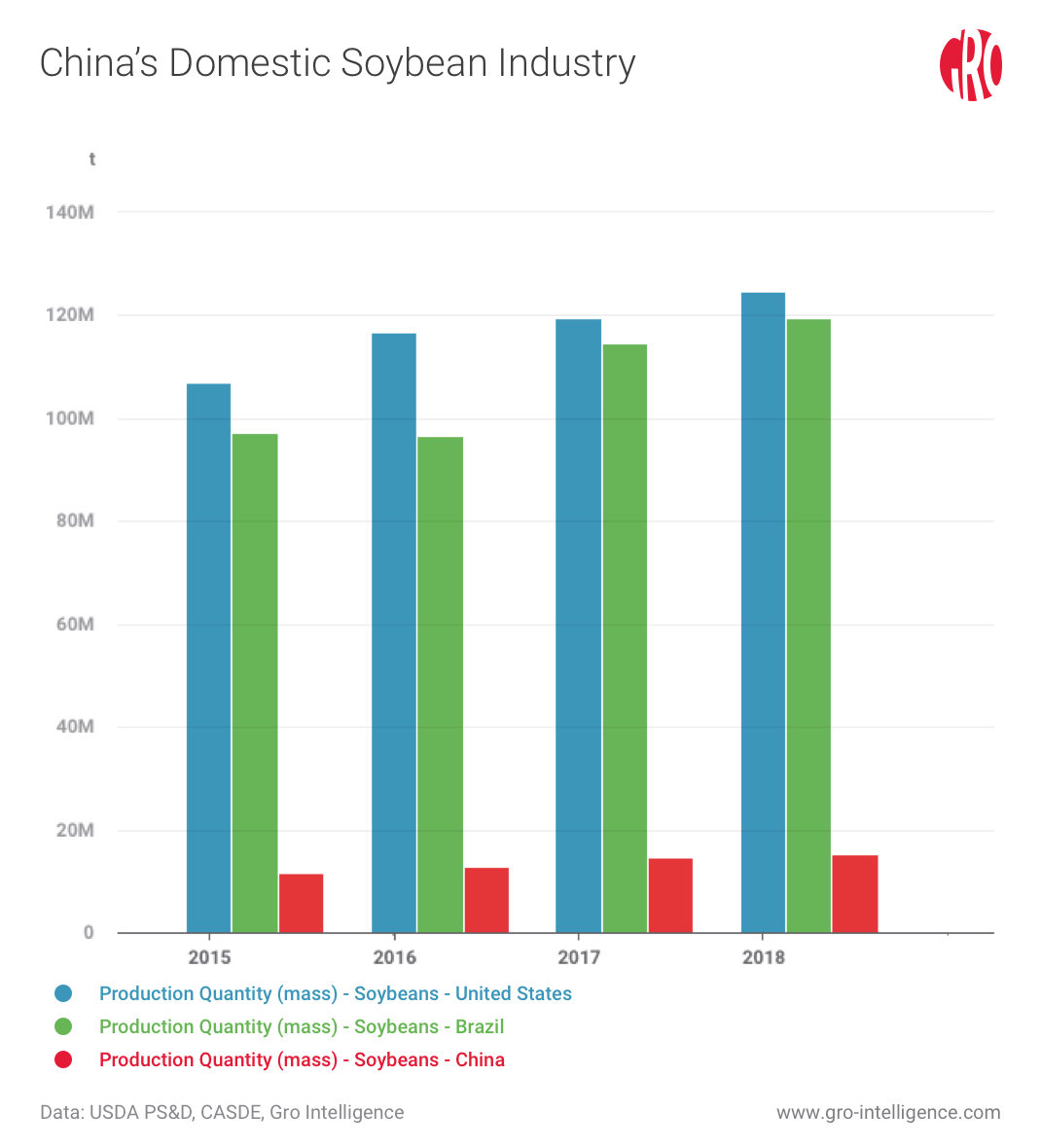 China’s domestic production of soybeans is dwarfed by that of foreign producers.

One development to watch closely is the ongoing spread of African swine fever in China, as Gro wrote about recently. With fewer hogs to feed, China may simply look to import more pork rather than their primary feed, soybeans.

Global demand for soybeans shows no sign of slowing, especially in light of rising worldwide consumption of meat for which soybean products are an increasingly popular feed source. Brazil continues to increase production and encroach on US numbers but faces new regulations on acreage planted. Differences in harvest times drive temporal separation in export sales between the two nations, which may continue to temper competition. However, new interest in China ramping up domestic production or increasing soybean acreage in lands acquired in Russia and Africa could reduce reliance on the US as a primary supplier. Closer to home, discussions about brokering a new NAFTA deal with Mexico and Canada will also shed light on the future of US soybean trade with its immediate neighbors. 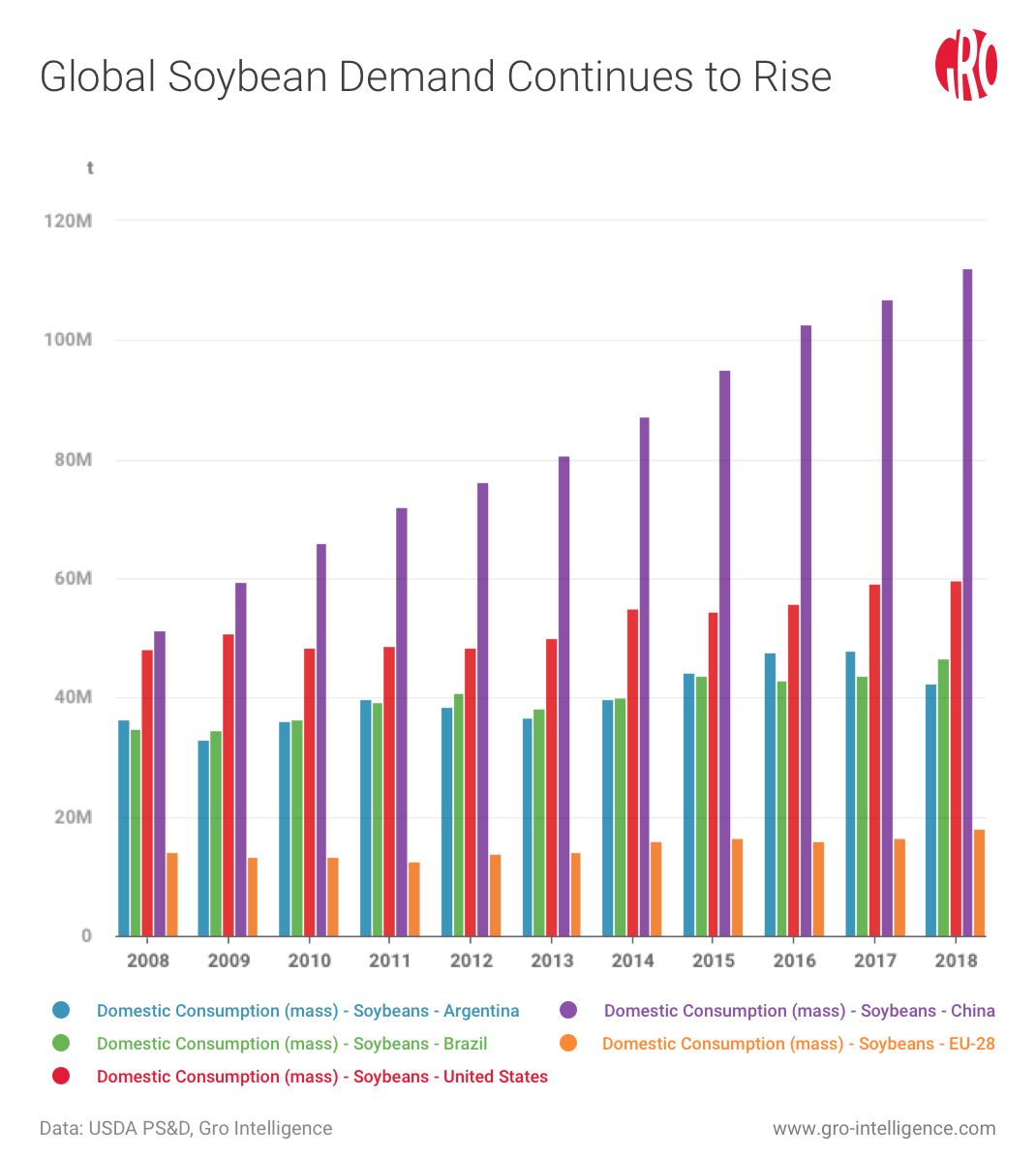 Government subsidies may be a temporary Band-Aid for US soybean farmers, but they are not a sustainable option for the future of US agriculture. As matters continue to unfold, Gro Intelligence can provide valuable insight into how the soybean market evolves in the coming years.