Webinar: A Quantitative Look at Farmer Protests in India

China’s need to secure access to agricultural products has prompted the country to pursue new foreign agricultural trade policies. The growing demand for everything from sugar to soybeans has led China to ditch measures geared toward maintaining self-sufficiency and embrace those that tap foreign agricultural resources. Most notably, outbound foreign direct investments (FDI) made through the Belt and Road Initiative (BRI) foreshadow growing Chinese agricultural demand. Although the BRI has been applauded by advocates of global free trade like the United Nations, International Monetary Fund, and the World Bank, some analysts question whether these investments will serve broader global interests in practice or whether they will prove beneficial only to the Chinese.

The Chinese government has a long history of protectionist policies aimed at improving domestic food security. China wants to reduce its import dependency for commodities it considers strategic such as sorghum, cassava, palm oil, and olive oil (upper right hand corner of the chart below). China is reliant on very few suppliers for these commodities, and those in the upper right hand corner represent very high Chinese import shares. By “going global”, China hopes to reduce supply risks by adding additional trading partners for these specific commodities. 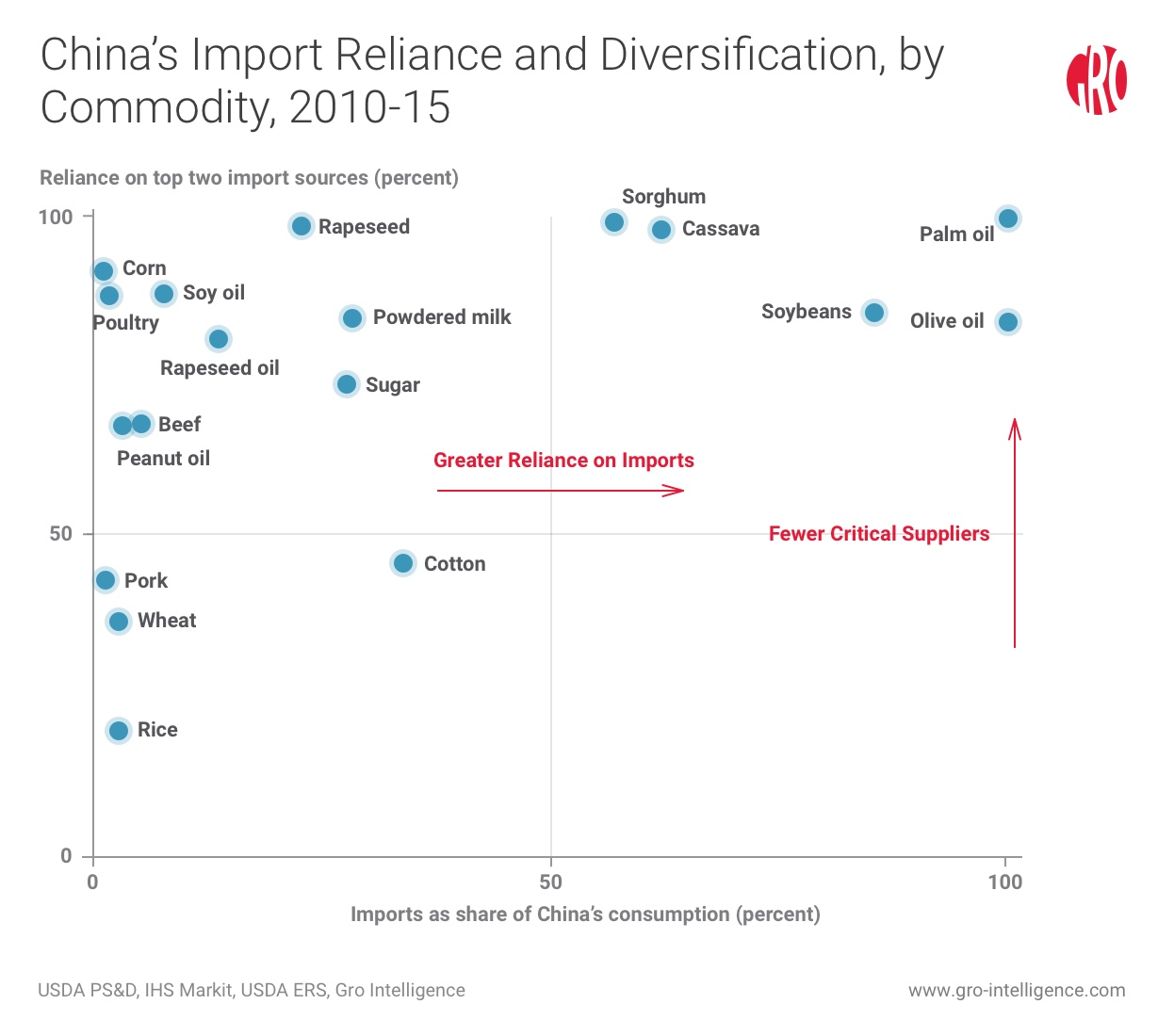 The current portfolio of import commodities demonstrates that China still prioritizes self-sufficiency in cereal grains. But in the mid-1990s, Chinese officials cut tariff restrictions on soybean meal, distiller's dried grains with solubles (DDGS), and other processed agricultural product. As a condition of joining the World Trade Organization (WTO) in 2001, China agreed to impose tariff rate quotas (TRQs) on rice, wheat, and corn and allowed lower-tariff imports into Chinese ports. Imports of these commodities are each capped at 5 percent of China’s annual consumption. Beyond the 5 percent cap, an import tax of 65 percent applies. Furthermore, importers have to comply with the TRQs on corn and wheat through a cumbersome application process. Because of the restrictions, importers prefer low-tariff commodities like DDGS, sorghum, and barley. 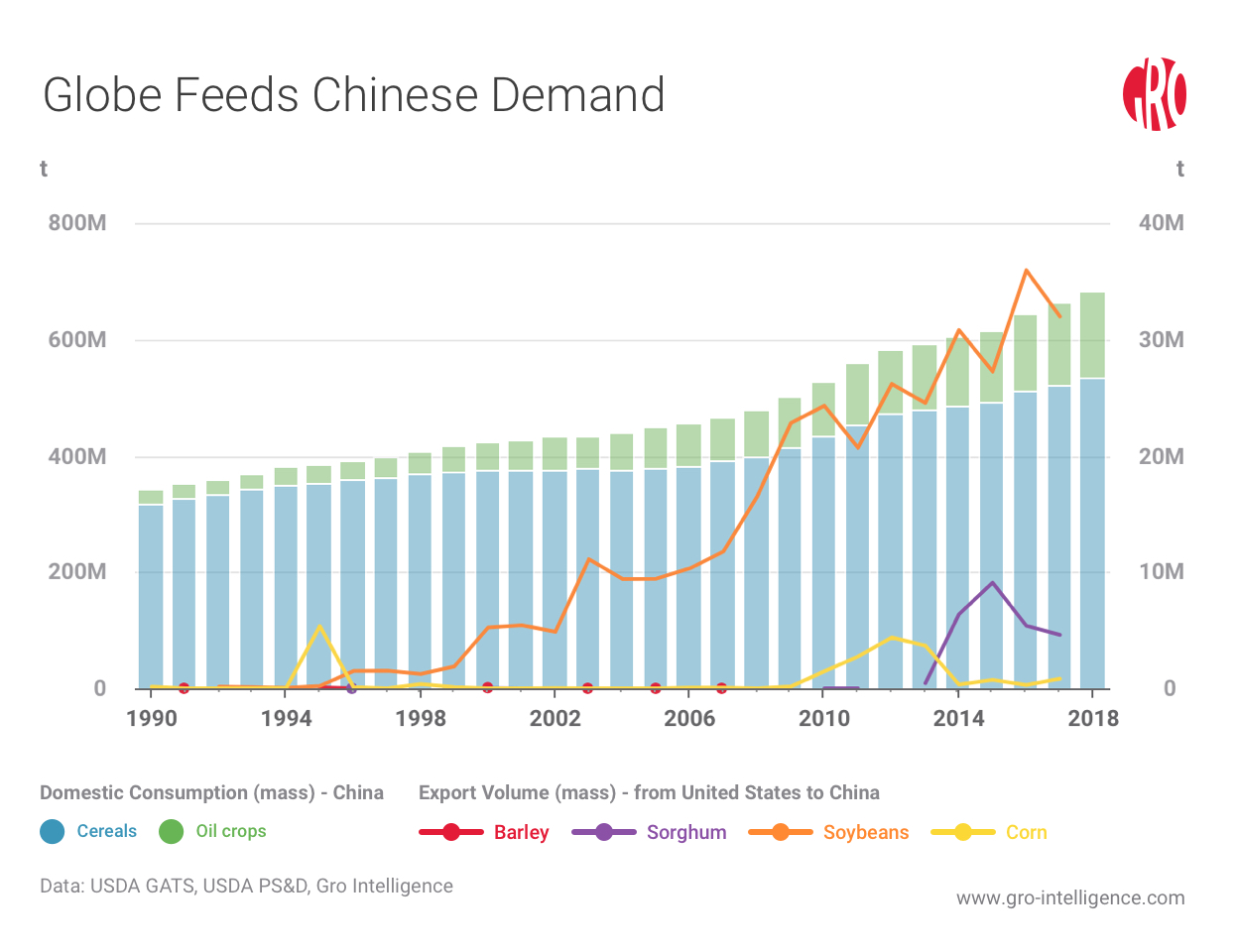 The Belt and Road Initiative (BRI), first proposed by China’s Xi Jinping in 2013, is a massive infrastructure and economic development project that will further expand trade channels across 80 countries. It’s chipping away at the Maoist ethos of strictly domestic food supply. While maintaining the country’s commitments to self-sufficiency in rice and wheat, BRI opens China up to increased imports of other food commodities historically considered to be strategic. 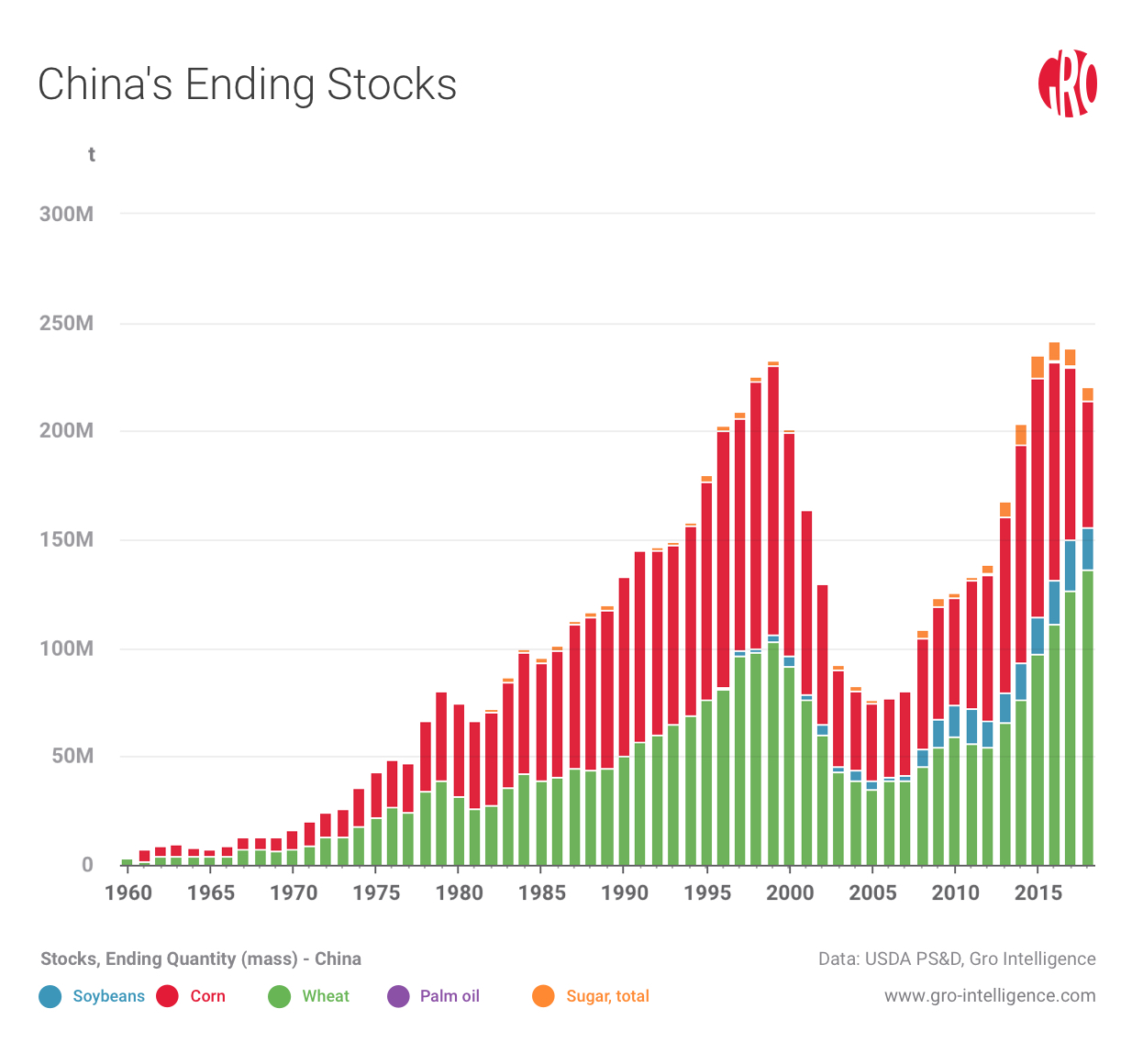 Russia shares a border with the Heilongjiang province of China, and Heilongjiang farmers have been planting vegetables and grains in Russia since the 1990s. In 2013, Heilongjiang provincial authorities lobbied the National Development and Reform Commission to gain an exemption from import tariffs during October to December each year for soybeans grown by Chinese farmers in Russia. Inspection and testing facilities at Russian border crossings were upgraded to handle agricultural products grown in Russia and procedures were established to inspect farms and products in Russia to expedite their entry in China. Chinese authorities reported upgrading and streamlining customs and inspections procedures at Russian border crossings to facilitate trade in agricultural commodities. Hengda Grain and Oil Group Co., Ltd. partnered with a local grain and oil enterprise in Inner Mongolia to import rapeseed and other commodities produced in Russia, process them at the Chinese border crossing, and then distribute the products within China. 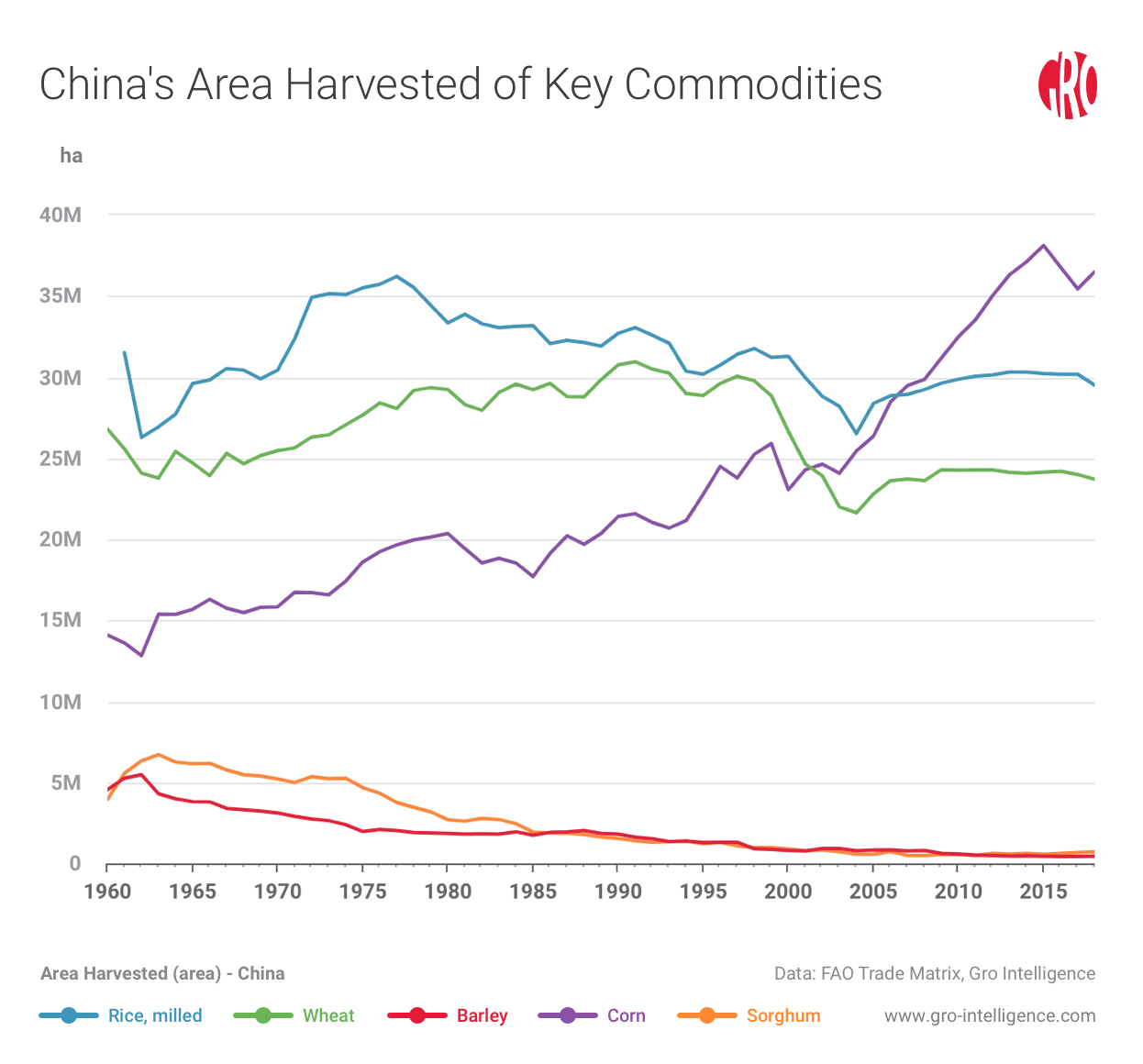 Chinese investment in Southeast Asia was $3.1 billion in 2016, according to the Chinese Ministry of Commerce. Palm oil, rubber, and cassava are the main crops that have been sourced there. In particular, Indonesian palm oil has Chinese agricultural investors salivating. Import quotas of Indonesian palm oil are set to increase to 500,000 tonnes in 2018. China’s Tianjin Julong Group also invested $56 million in palm oil plantations spanning 24,000 hectares the Indonesian island of Kalimantan. In Cambodia, one million hectares of farmland have been set aside for foreign entities to lease. Twenty four percent of the leased land has gone to Chinese firms. They are mainly interested in rubber, lumber, and other tree crops. 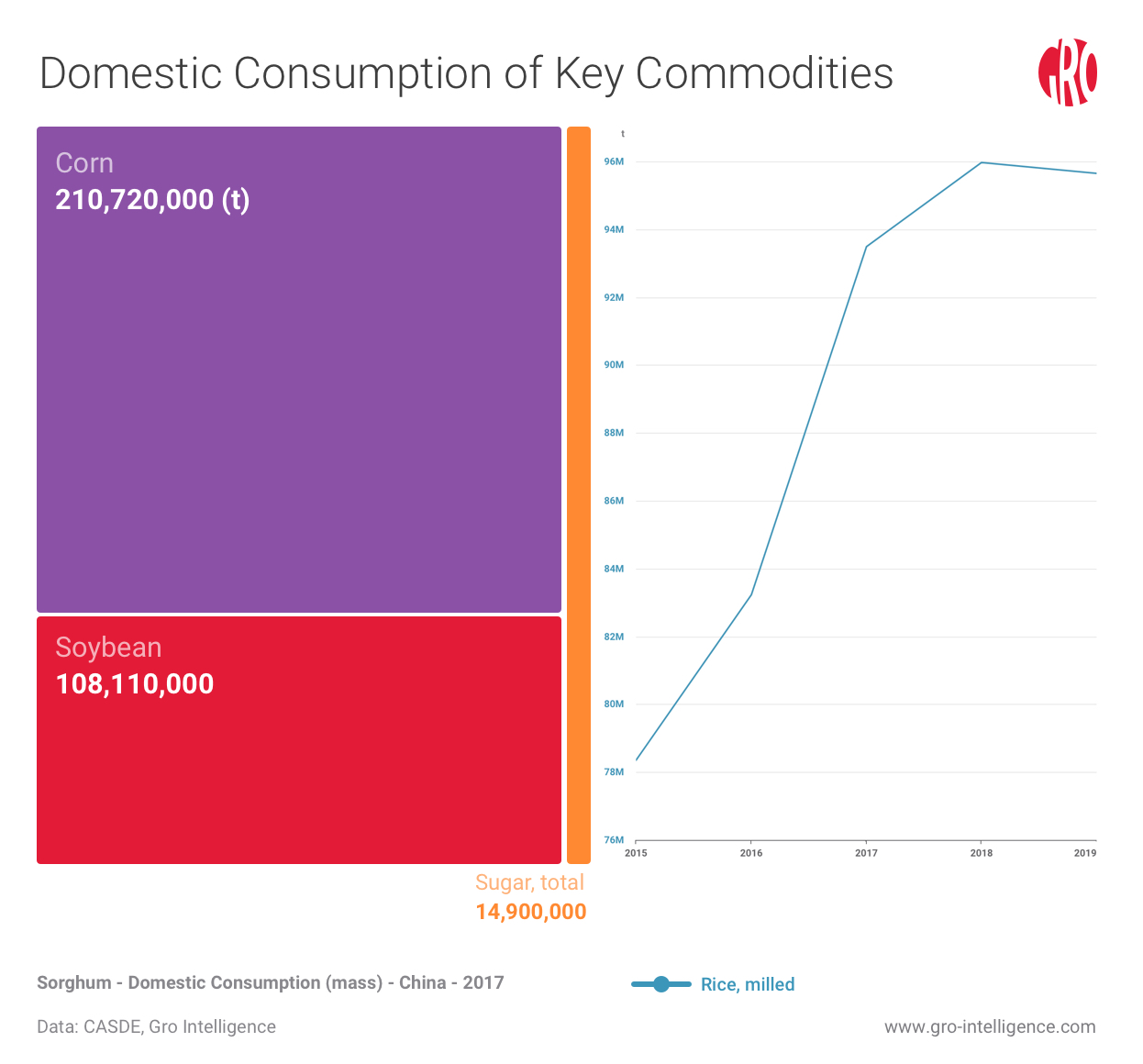 Soybeans, sugar, grains, and oilseeds remain the focus of Chinese FDI in Latin America. Brazil exported 2.07 million tonnes of soybeans to China in January 2018 alone, up 720 percent year-over-year. As part of China’s WTO commitments, 1.94 million tonnes of sugar can be imported from Brazil at a relatively low 15 percent tariff, but still any volumes that exceed the quota amount face a 50 percent tariff. At the same time, Argentina supplied China with 90 percent of its soybeans in 2017 amounting to 6.57 billion tonnes.

Protests by environmental groups and local landowners stalled two projects, one in Brazil started by Chongqing Grain Group and one in Argentina started by Beidahuang. These challenges are causing a shift toward an FDI strategy that acquisition of existing firms. One of the most notable examples of this is China’s COFCO, which gained control of grain terminals, docks, and processing facilities in Argentina, Uruguay, Paraguay, and Brazil by acquiring Noble Agri and the Netherlands-based trading company Nidera.

A study by Brautigam and Zhang in 2013 found that only around 4 percent of reported Chinese land acquisitions in Africa could be confirmed. Two projects that reported over 6 million hectares in size actually turned out to be less than 240,000 hectares. More than half of China’s acquisitions reported by Brautigam and Zhang in 2013 had inflated numbers. The inflation of the ZTE/Zongery and Wuhan Kaidi projects by 2 million hectares each in Cameroon and Madagascar were two notable examples. 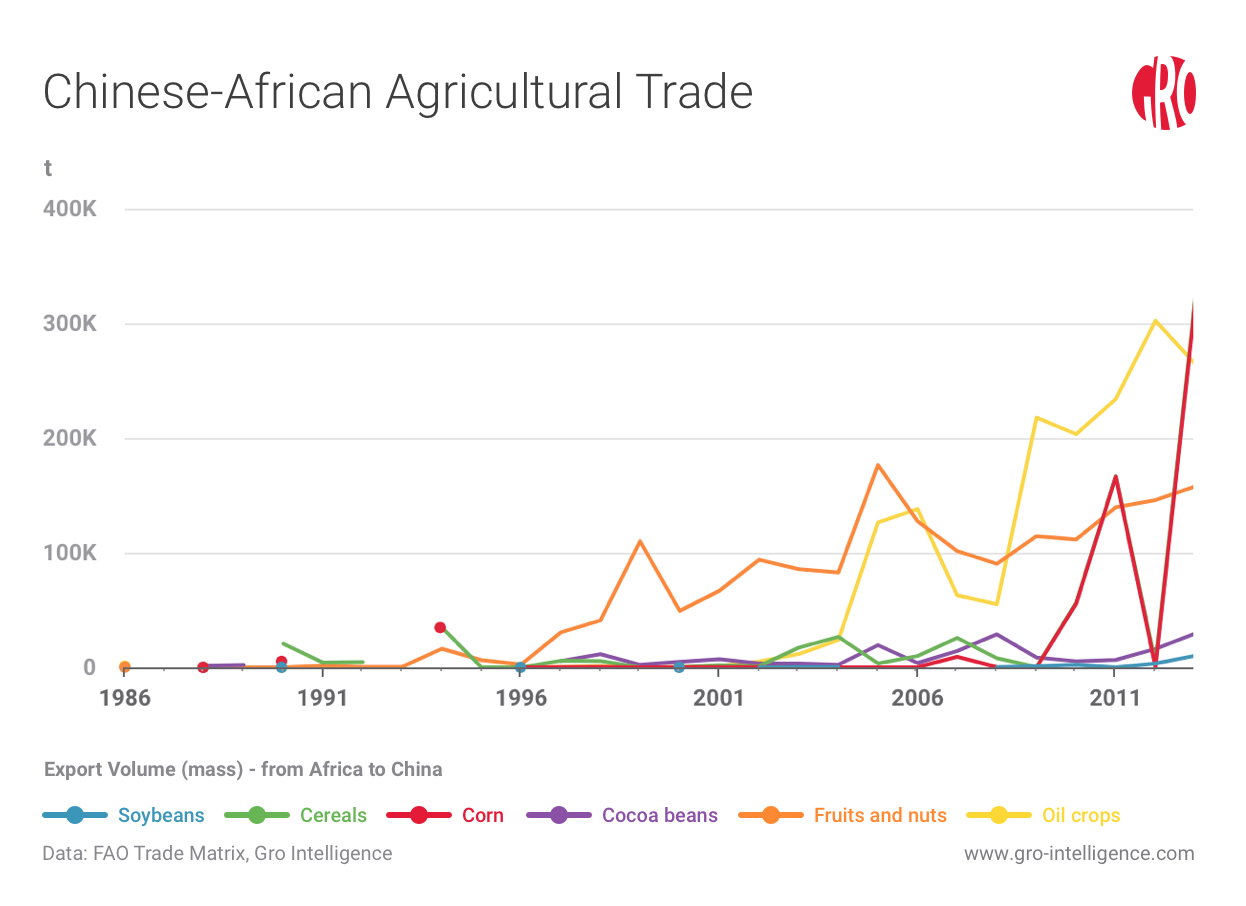 As China has expanded its FDI in agriculture across the world, analysts are questioning where current developments will leave the US, its largest partner. Recent US tariff policies imposed by the Trump Administration may spur even more Chinese infrastructure investments with competing agricultural suppliers. China only entered the WTO in 2001. Now it seems that the US—formerly seen as one of the world’s leading advocates of free trade—has decided to halt further liberalization efforts.

As heated trade war rhetoric has reverberated between Beijing and Washington, Chinese currency has depreciated rapidly. By making imports to China more expensive in local terms, this has the effect of worsening the business case for Chinese agricultural FDI. Some say that the currency decline is an intentional effort by China to make its exports less expensive in the face of rising trade barriers. If so, this implies that the authorities have accepted the undesirable side-effect of reducing the efficacy of the Belt-Road Initiative by lowering the affordability of foreign products in Chinese domestic markets. If the BRI makes commercial sense, it should function as described in its marketing materials: as a two-way superhighway for mutual trade between East Asia and the rest of the Eurasian landmass. As just another way to dump Chinese manufactured products that can travel more cheaply by existing sea lanes anyway, not so much.

A high level of complexity is the only clear thing about the situation. The entire Chinese mercantile project over the last few decades rested heavily on the willingness of the US consumer to buy inexpensive imported products. If the US significantly backs away from free trade, China’s outbound agricultural FDI effort so far will likely prove to be an inadequate alternative to supply its continued food demand growth. As reciprocal trade barriers rise around the world, the biggest beneficiaries of the retreating free trade regime stand to lose the most. The critical question is: “Who are they?”