The Chinese have farmed and consumed tea in the Wuyishan mountains for millenia. When Sino-British tea exchange began during the 18th century, the Chinese kept their growing practices a guarded secret to protect their most valuable export. This stranglehold on tea persisted until 1849, when Scottish botanist Robert Fortune successfully smuggled out plants, seeds, and invaluable knowledge on tea cultivation methods from China. This act of agri-economic espionage forever disrupted the global tea trade, as it allowed the British to circumvent the Chinese market by establishing enormous production facilities in its India colony.

Today, tea is the world’s second most widely consumed beverage, behind only water, and tea production continues to surge dramatically. Now, as conversations about developing futures and swap markets for tea begin to take place, the global tea market is poised for systematic overhaul. In this article, we will show you how Gro Intelligence’s analytics can guide users through the rapidly evolving tea market.

Camellia sinensis is a small evergreen tree or shrub species. The leaves of C. sinensis—commonly known as tea—are what dictates the plant’s colossal cultural and agricultural value.

There are four known varieties of tea and hundreds of cultivars that range in traits and environmental tolerances. Tea thrives in warm, humid, subtropical climates with acidic, well-drained soils rich in nutrients and organic matter. Factors such as soil type, elevation, precipitation, and variety or cultivar affect the overall flavor of teas, which in turn can affect price. The tea industry grades tea on quality, and superior quality teas typically fetch a higher price at auctions.

C. sinensis produces both black and green teas. Tea manufacturers oxidize tea leaves by macerating or crushing them, which introduces oxygen to cells and allows enzymes to facilitate the chemical reactions that result in black tea. Steaming or pan-firing tea leaves at temperatures greater than 150 degree Fahrenheit denatures enzymes, which prevents oxidation and produces green teas.

Global tea production increased 54.6 percent after 2006, reaching 5.73 million tonnes in 2016. The primary variable driving tea market growth is demand, which positively correlates with socio-economic factors such as income, education, and cultural background. In 2016, ready-to-drink teas surpassed sodas and other soft beverages in consumption for the first time, and markets for other popular health-conscious tea products such as matcha and kombucha continue to grow.

Demand has grown through Asian, African, and Latin American nations due to rising per capita income levels. World predictions for 2027 indicate annual production of 8.07 million tonnes, a further increase of nearly 34.3 percent from 2016. Despite this, challenges associated with climate change and crop management threaten tea production in all major growing regions, namely China, India, Kenya, and Sri Lanka, which together account for 78 and 73 percent of tea production and export volume, respectively. Tea farmers will have to adjust to changing environmental conditions, food safety regulations, and economic pressures to keep up with the ever-growing demand. 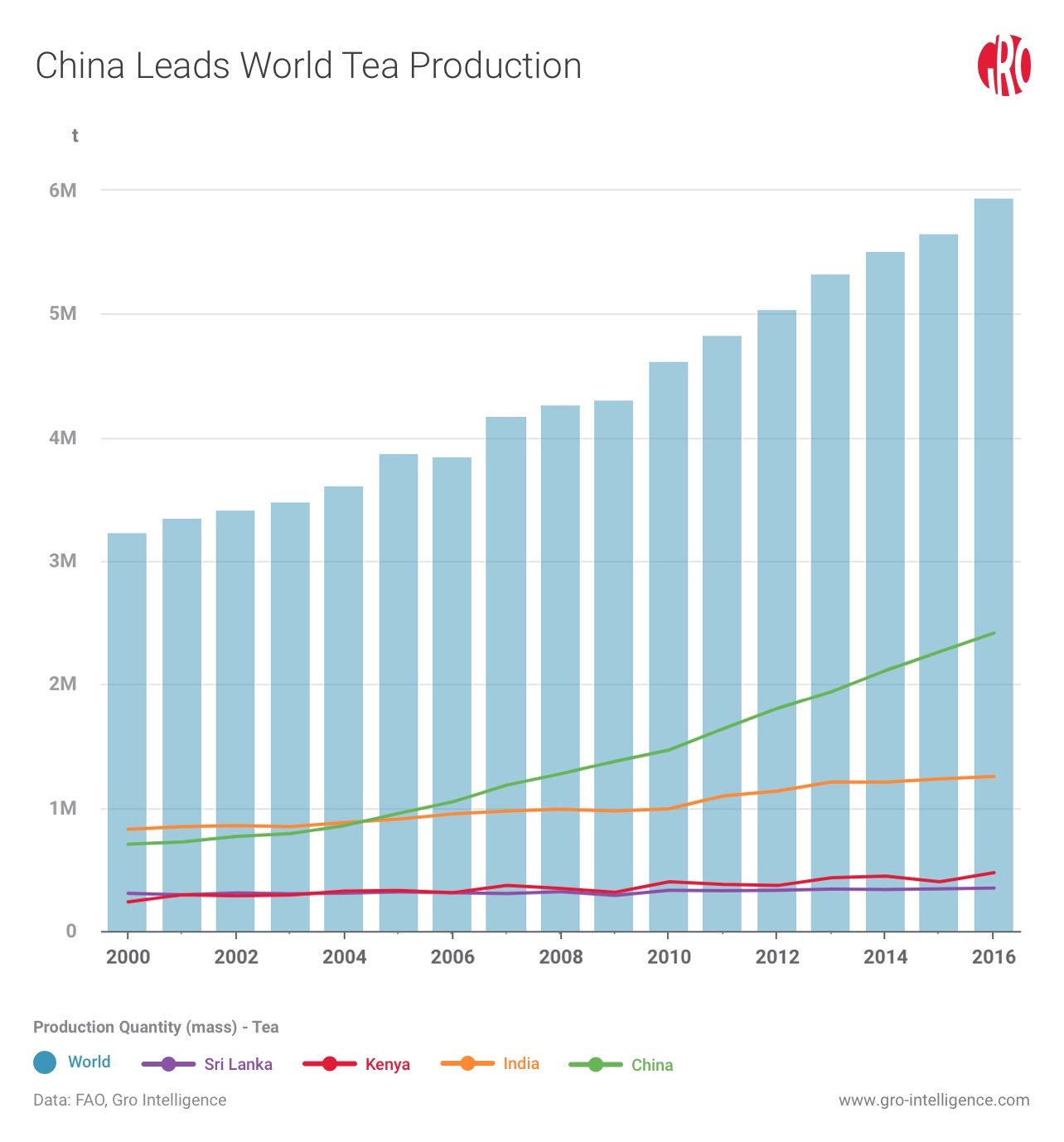 Tea traders meet primarily at three major international auction houses in Mombasa, Kenya; Colombo, Sri Lanka; and Kolkata (Calcutta), India. Price fluctuations at all auctions are common, as tea is a relatively volatile commodity, highly susceptible to changes in climate and management practices. Seasonality also greatly affects tea trade, as some growing regions are able to cultivate year round, while others are restricted to defined growing seasons. Collectively, these factors lend unusual uncertainty to tea trade, which necessitates close monitoring. 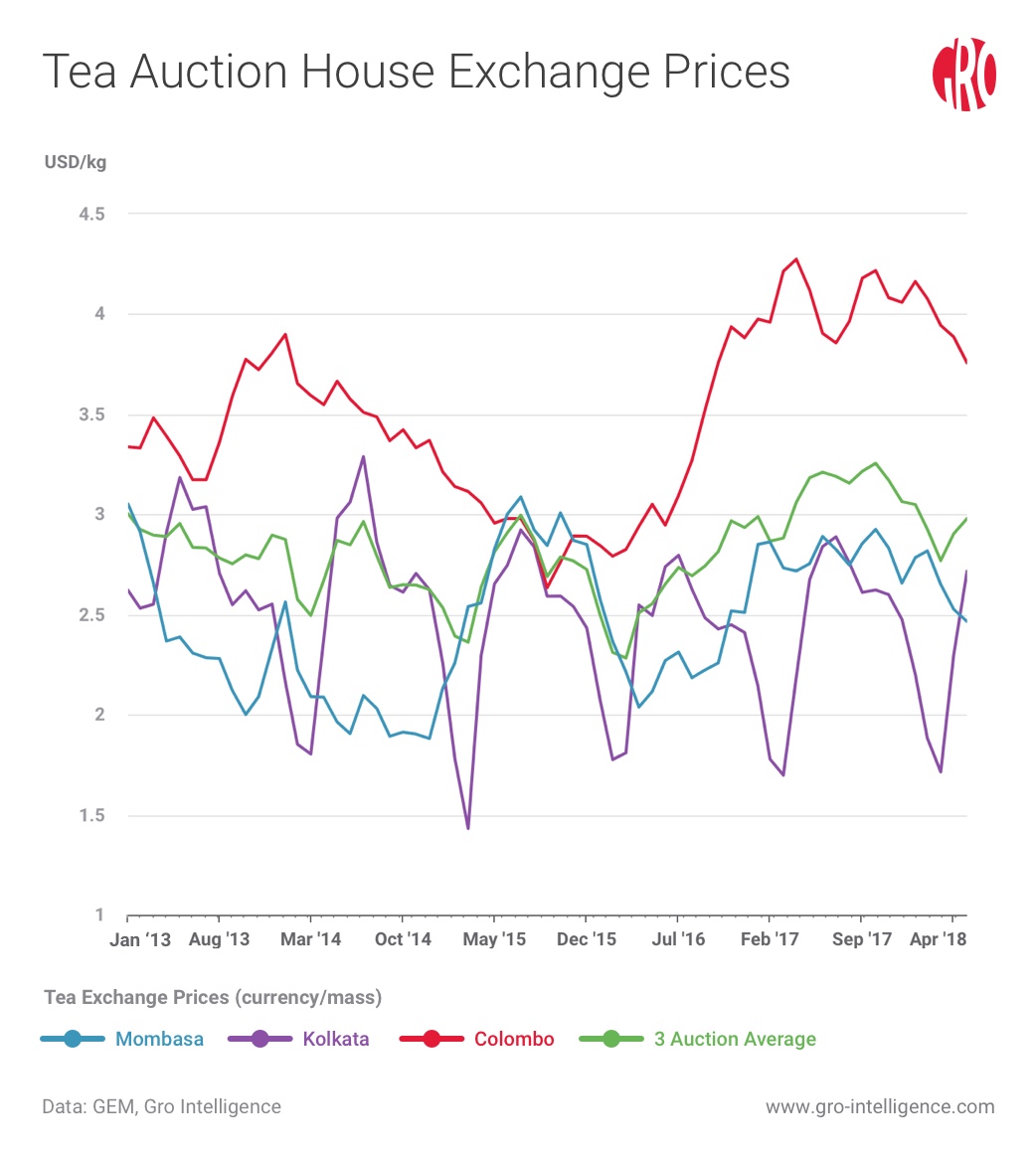 As a commodity with a long and often tumultuous history, tea has withstood the test of time and maintained its appeal over the centuries as a preferred beverage with a challenging yet bright future.

From its quiet beginnings in rural China, tea quickly became a critical geopolitical chess piece. After Robert Fortune ran off with China’s prized plants, the British began to rapidly institutionalize tea production in colonial India in order to challenge the Chinese monopoly.

Today, India is the world’s second largest tea producer. In 2016, India produced 1.27 million tonnes of tea, or roughly 22.2 percent of the global supply. Over the next decade, Indian production is poised to reach 1.62 million tonnes, an additional 27.6 percent increase through 2027.

Reaching this number does not come without challenges, however. Climate change threatens the Assam Valley, India’s primary tea producing region, which alone accounts for over half of Indian tea production. Greater frequency of extreme fluctuations in rainfall and temperature presents challenges to crop management. Sporadic heavy rainfall erodes soil, and longer dry periods increase the likelihood of pest and disease issues, all of which translate into higher costs of production. Indian exporters are also reluctant to raise prices, despite increasing production costs, as they face stiff competition from Kenya and Sri Lanka. However, approximately 80 percent of Indian tea is consumed domestically, which likely means that increasing production costs will only marginally increase international prices. 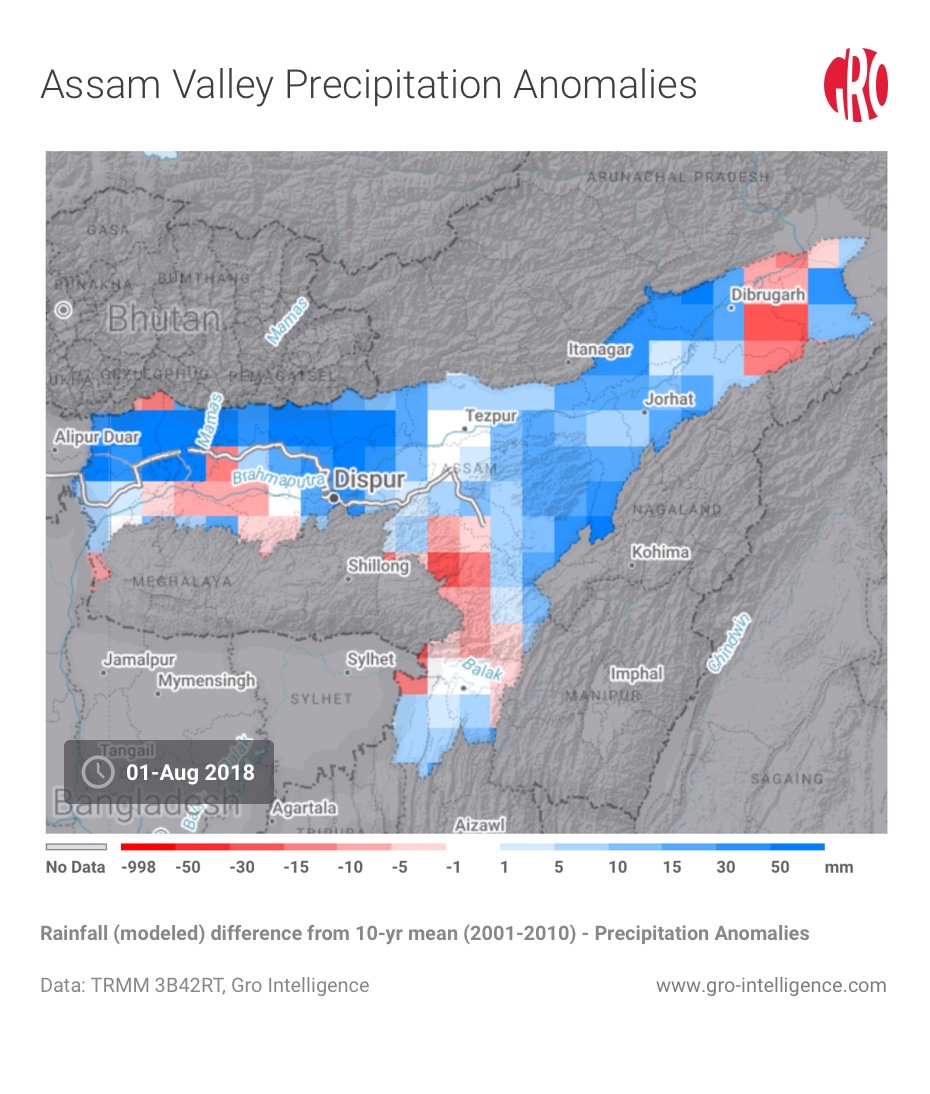 Currently, Indian traders are positioned to challenge the Sri Lankan black tea market as the island nation faces issues with production and crop quality. Higher wages in Sri Lanka have increased costs of production, and Russia and Japan returned recent exports citing pest and pesticide residue complaints. Sri Lankan black tea currently trades at $3.83 per kilogram whereas India prices sit nearly a whole dollar lower at $2.87. One of Sri Lanka’s largest export markets is Iran. India trades with Iran in rupees, but Sri Lanka bills in dollars, which may tack on additional costs and difficulty when US sanctions hit Iran later this year. This confluence of factors may allow India to grab part of Sri Lanka’s export market in Iran as well.

As it stands, Sri Lanka is experiencing financial woes. Currently $250 million in debt to Iran for previous oil purchases, Sri Lanka wishes to cover the cost using the equivalent value in tea exports instead of dollars to avoid US sanctions, as bartering tea is not addressed by those rules. Last year Iran imported roughly 27,400 tonnes of Sri Lankan tea, but the aforementioned production issues could incentivize Iran to look more favorably toward India. 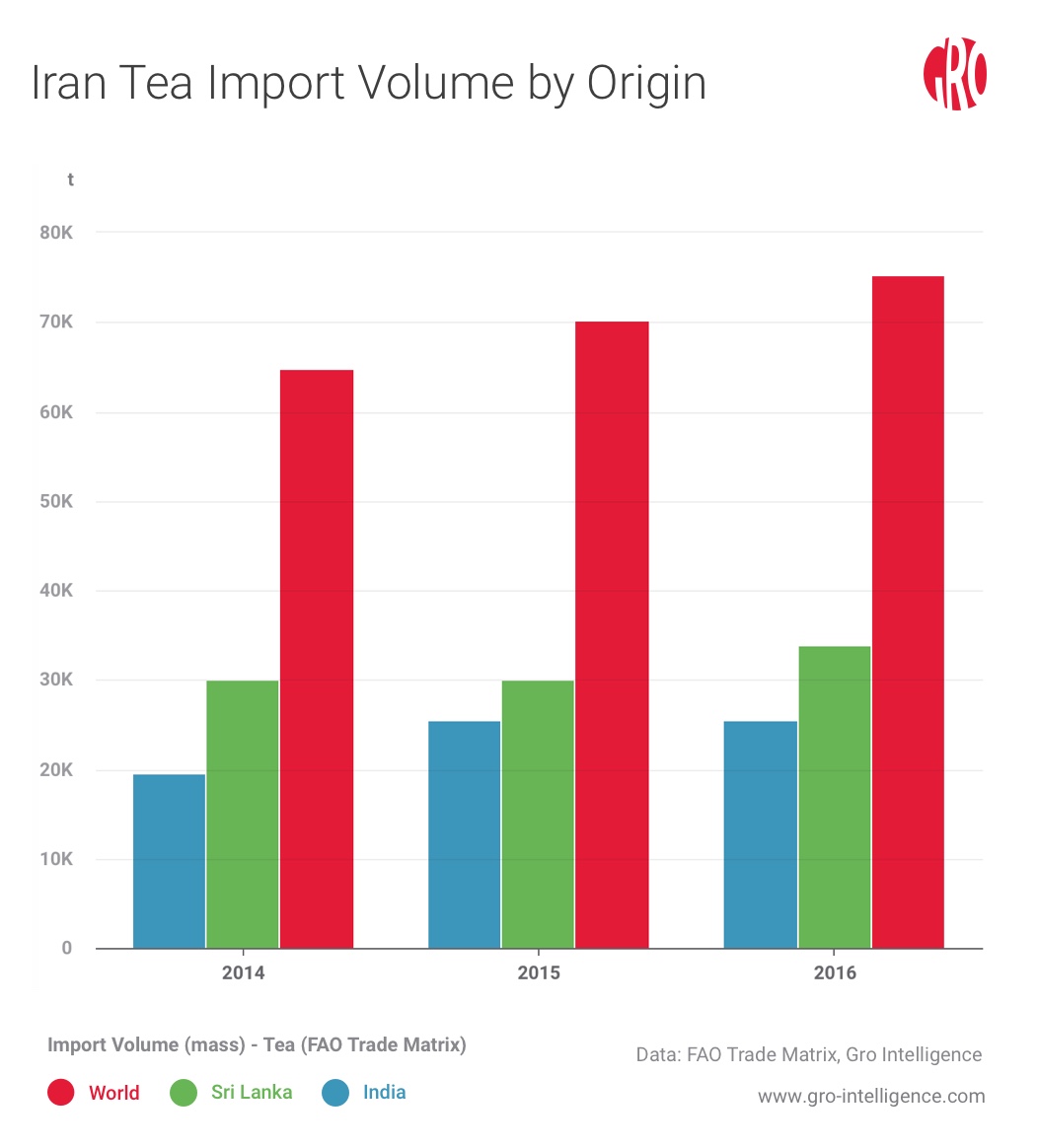 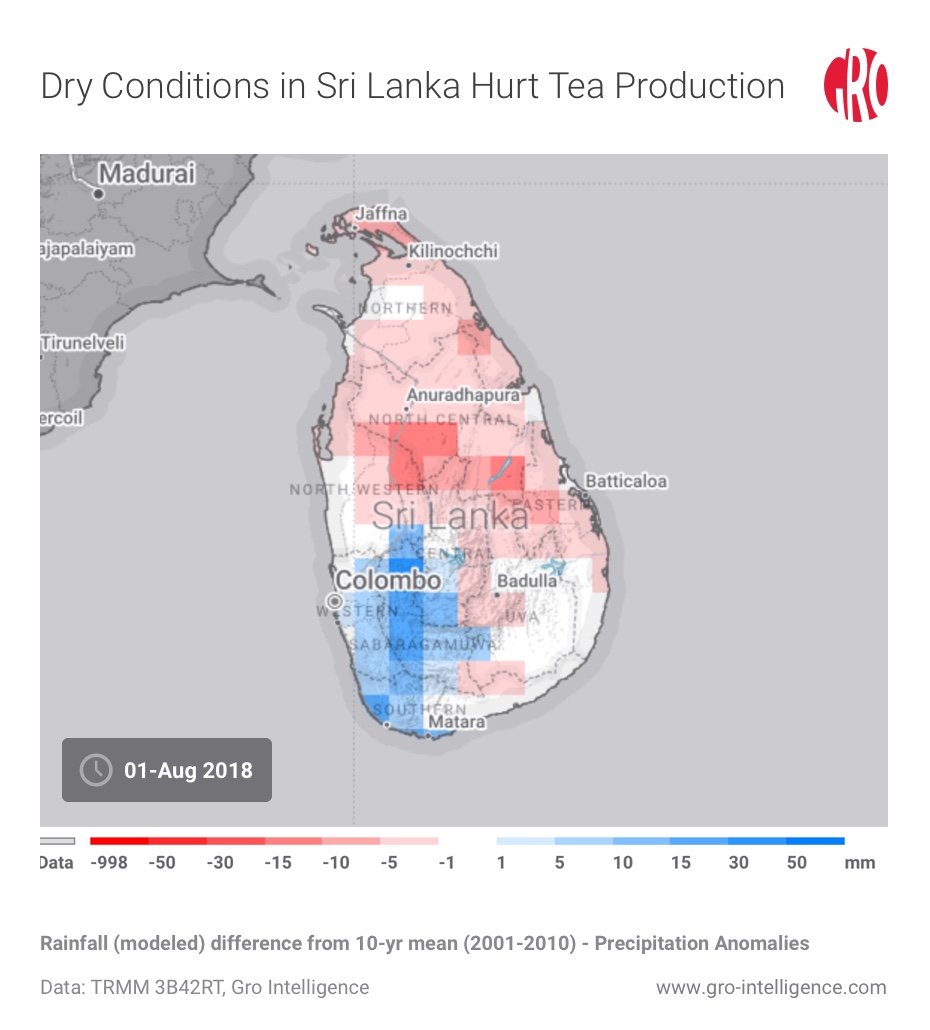 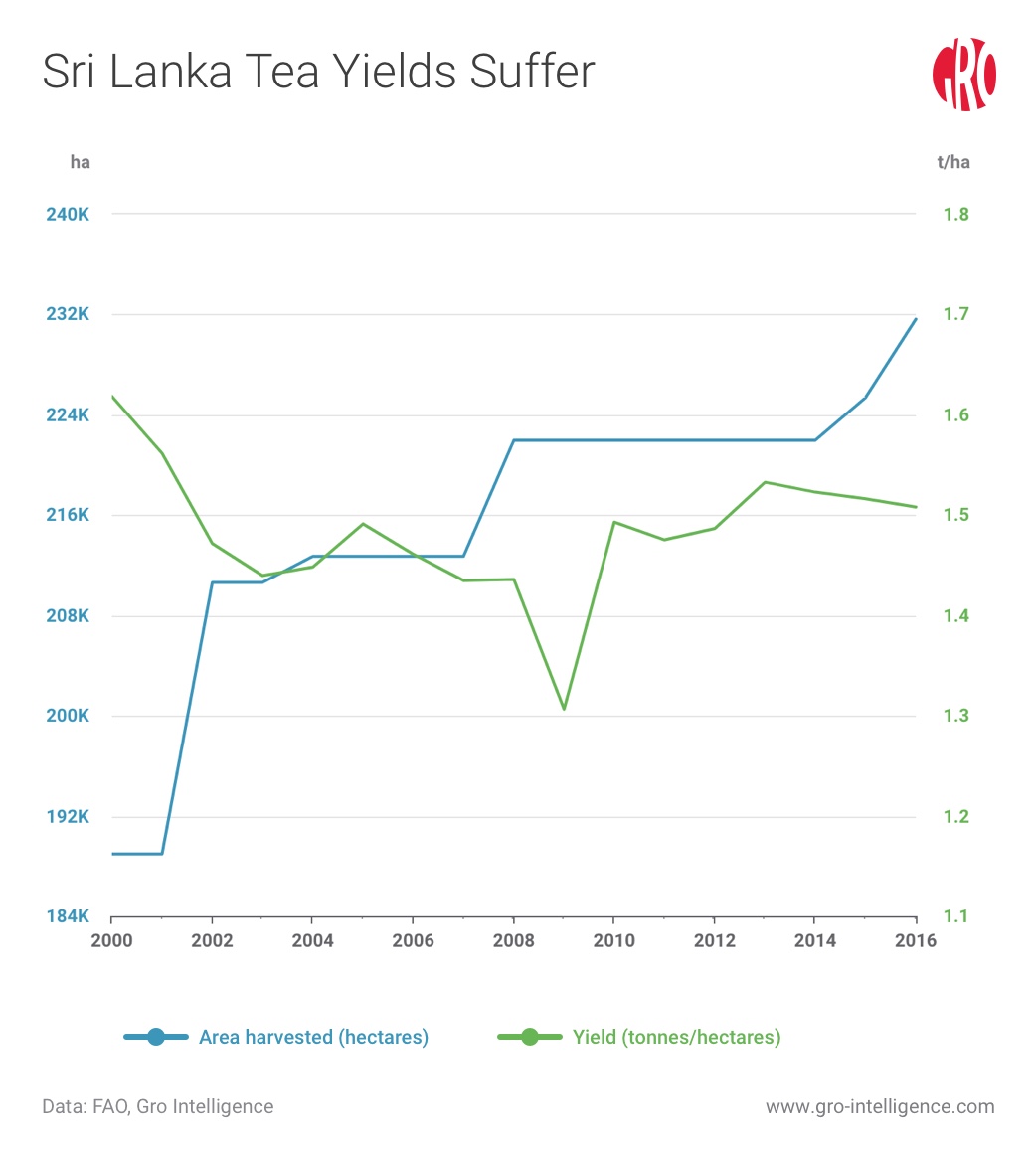 Sri Lankan tea production in 2016 reached only 295,300 tonnes, one of the lowest figures in the past decade. Climate change and restrictions on fertilizer use have hurt production in recent years, however, this figure is expected to grow to 370,000 tonnes by 2027. Yield has declined while area harvested has increased, but these results may be due to a number of additional factors which hamper tea production, including declining soil quality and aging tea plants. Most tea production facilities in Sri Lanka are not irrigated, and soil water deficit issues are common outside of monsoon season. Adapting to climate change by enhancing irrigation and altering land management practices threatens to further increase production costs, which may forecast additional price increases for Sri Lankan tea.

Tea is vital to the Kenyan economy, as it is the country’s chief single commodity foreign exchange earner. Like Sri Lanka, Kenya exports most of its tea. In 2017, Kenya exported approximately 415,700 tonnes, maintaining its status as the world’s largest tea exporter. Kenyan tea production has doubled over the past two decades, due in part to dedicated acreage doubling as well. The Kenyan tea market is expected to expand even further through 2027, as annual production and exports are projected to increase 2.7 and 2.8 percent, respectively.

Kenya, like Sri Lanka, has a larger dependence on tea trade than most other exporting nations. Both Kenya and Sri Lanka routinely finance over half of their food imports via their tea exports. This reliance imparts urgency to addressing domestic factors that may limit tea production and sales, such as climate change. A familiar climate trend appears in Kenya, in that unpredictable rainfall distributions and rising temperatures could negatively affect future Kenyan production. 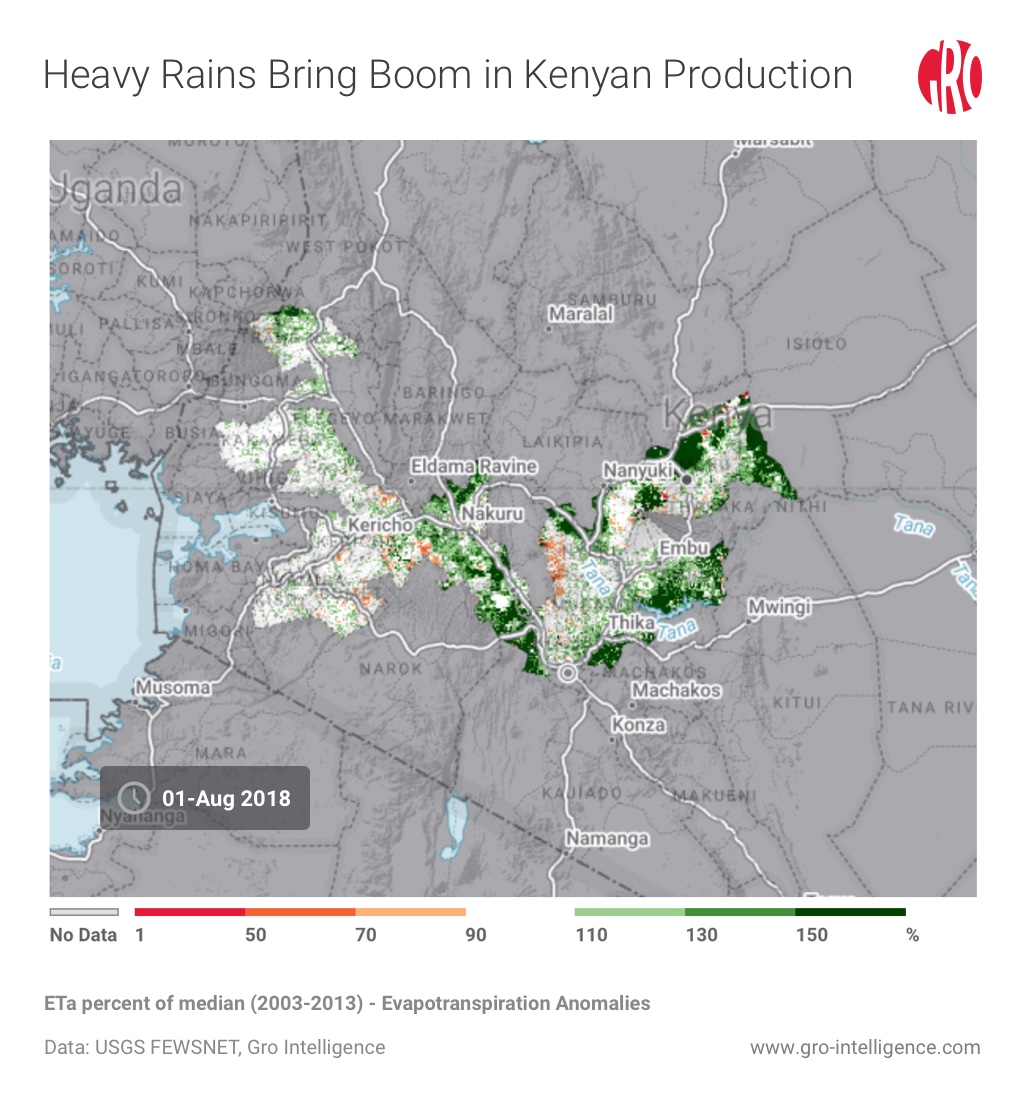 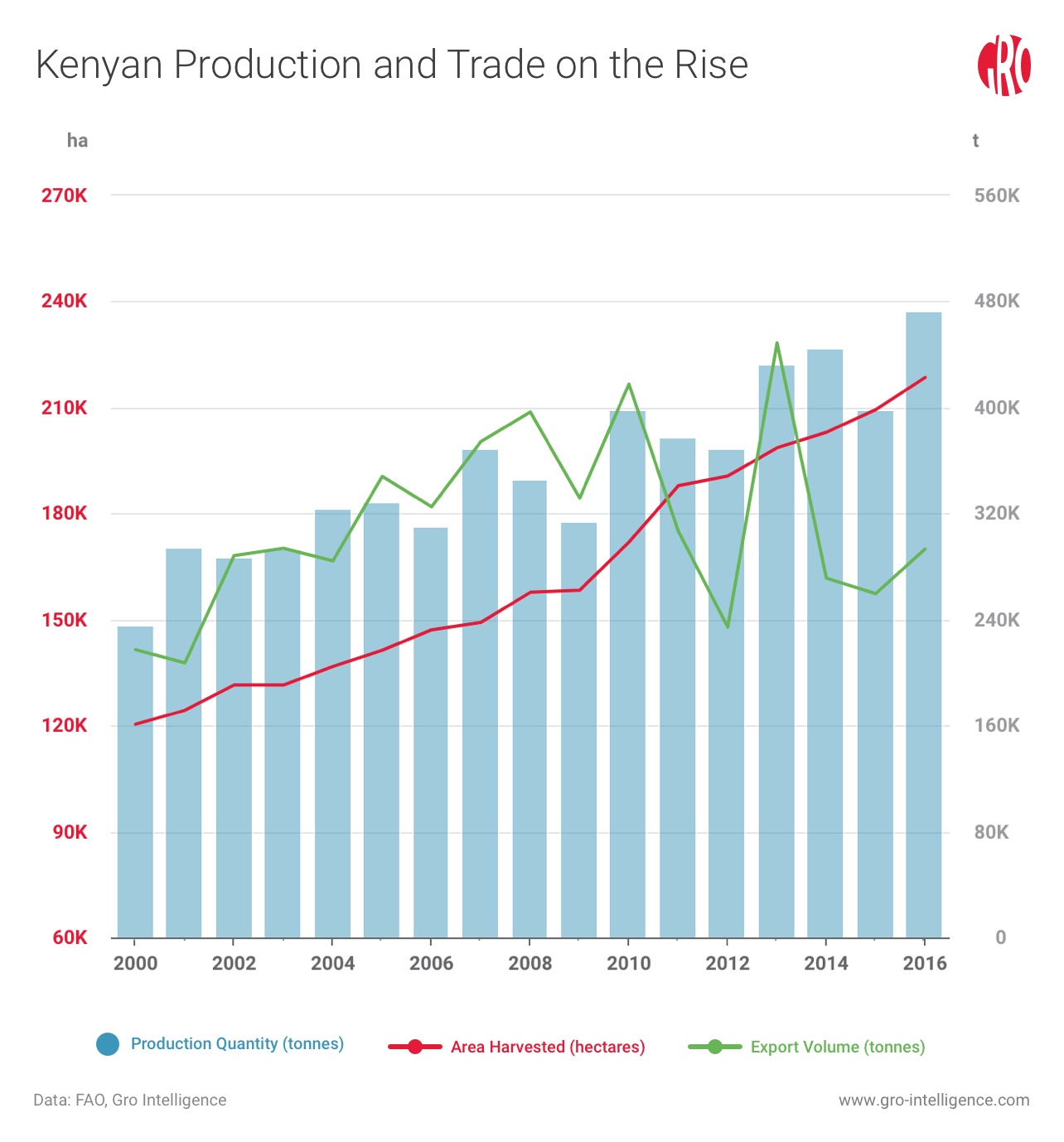 Favorable weather has boosted Kenyan tea production in 2018, but prices have also dropped in tandem. The onset of rains drives production in Kenya, and recent increases in precipitation boosted this year’s crop 17 percent compared to 2017. However, this excess has caused a 13 percent drop in prices at the Mombasa auction over the past month. On top of that, new rules on aflatoxin testing enforced in 2017 halved exports to Pakistan, Kenya’s largest export destination.

China has long been the world’s leader in tea production and is still expanding. Production doubled from 1.17 million tonnes in 2007 to a whopping 2.44 million tonnes in 2016. This recent growth has been spurred on by burgeoning domestic demand, as consumption in China has increased at an annual rate of 10.1 percent over the last decade. 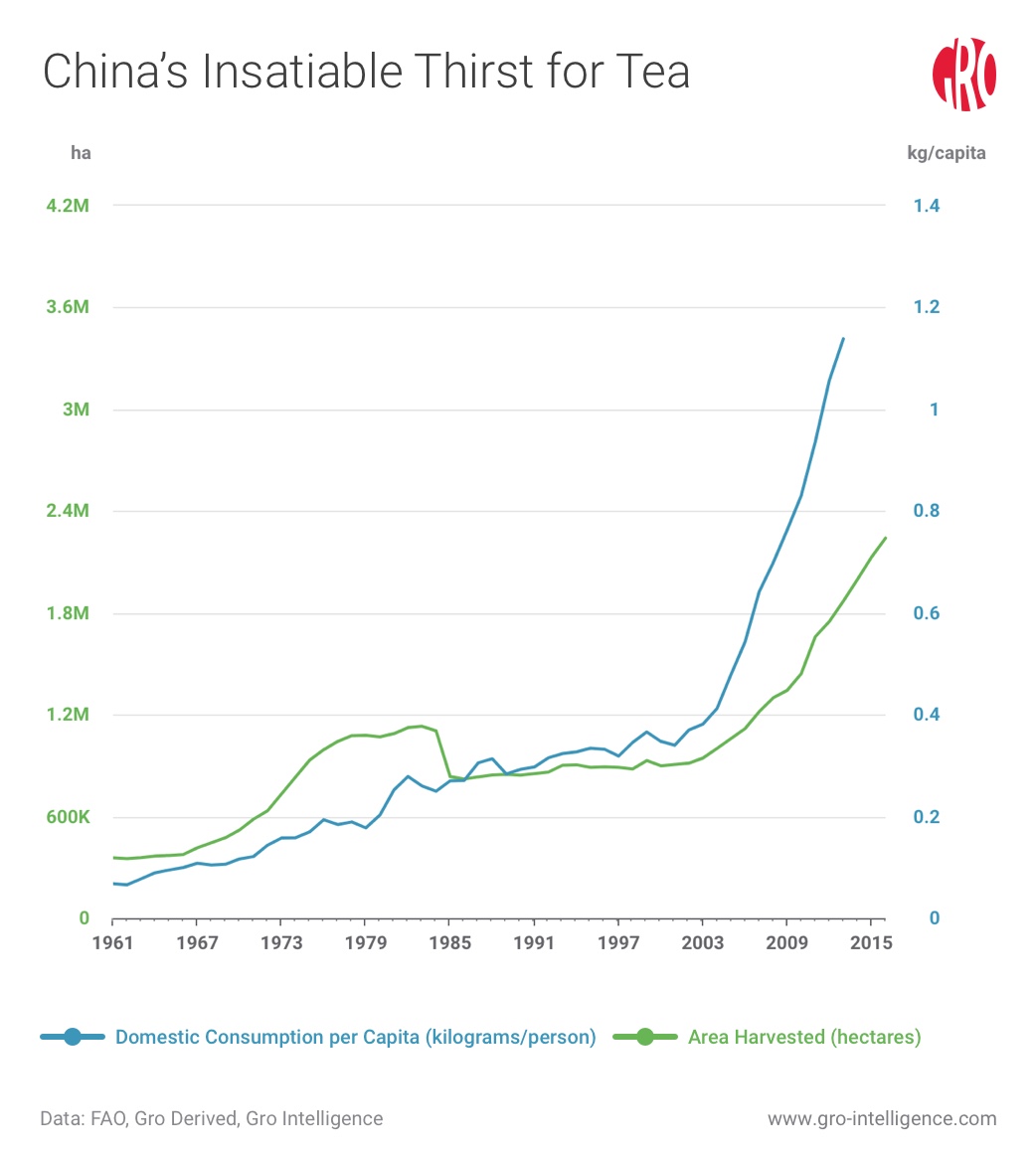 China produces 42.6 percent of the global tea supply and will continue to reign as the world’s primary tea producer for the foreseeable future. Tea is grown over a wide geographic range in China, and climate change is expected to affect key production centers in varying ways. However, the effect on production is not so much a concern as is the effect climate change has on the quality of Chinese teas. Chinese smallholder farms grow tea with rich cultural histories at varying locations and elevations through different seasons on a wide array of soil types. This heterogeneity has promoted the development of unique tea types. As climate change adjusts the range of tea growing zones, smaller tea production areas will experience disproportionately greater growing pains in efforts to conform to new conditions.

Today, only 6 original Dahongpao tea bushes—the ancient and prized variety stolen by Robert Fortune—remain in the Wuyi mountains, but now China keeps a closer eye on its tea crop. Newly implemented environmental regulations targeted at removing illegally planted tea bushes and managing tea supply have driven up tea prices to applause from smallholder farmers. To taste a sip of Dahongpao today, buyers must be willing to shell out an estimated $1,400.

“We find tea one of the neces­sities of life in the strictest sense of the word,” wrote Robert Fortune in his China travelogue centuries ago. This sentiment still holds true today, as tea stands as an aspirational good with demand growing throughout the world. Global tea consumption increased over the past decade to 5.5 million tonnes in 2016—an annual rate of 4.5 percent—and shows no signs of slowing.

The global tea market carries an estimated $15 billion value, and with the composite price of tea rising 22.6 percent in 2017 to a record high of $3.15 per kilogram, conversations about developing a futures and swap market for tea have gained more traction. But implementation introduces various hurdles. Nearly 3,000 tea varieties, which vary in grading and quality, are currently traded on the market and contribute to commodity heterogeneity. There are also issues with market segmentation, as separate sub-markets exist for Chinese green teas, Colombo orthodox black teas, and crush, tear, curl (CTC) teas from various locations. Despite this, new discussions are looking towards similarities in coffee and cocoa futures markets as models to adopt.

Tea is a volatile commodity, but having tea futures contracts would enhance price transparency and assist in mitigating risk. This development might also contribute to food security and rural development in nations like Kenya and Sri Lanka where much of the production is dictated by smallholder farms. Smallholder farms produce 70 percent of the world’s tea, but sometimes production costs exceed the prices received for leaves. Futures contracts can mitigate this trend by enabling farmers to hedge out pricing risks.

Today, Gro Intelligence is providing advanced data and analytics for users to read the leaves of global tea trade by visualizing the varying factors influencing tea production and prices. Coverage extends over the key geographic regions outlined above as well as smaller or more specialized origins in real time. Using Gro, traders and analysts stay current on market movements in this complex and ever-evolving global market.