Initiatives to produce large amounts of ethanol in the United States first began in 1978 with the Energy Tax Act, part of the larger National Energy Act. The legislation exempted gasoline with at least 10 percent ethanol from a 40 cent excise tax. More forceful steps by federal authorities followed with the Energy Policy Act in 2005, which famously mandated that gasoline be blended with increasing amounts of corn ethanol and other biofuels. Like petroleum before it, corn’s relative ubiquity, and the ease with which its starchy kernels can be transformed into ethanol, made it the obvious choice as the first large-scale, commercially viable biofuel. By 2015, corn ethanol already accounted for roughly 80 percent of all biofuel production in the United States.

Corn ethanol has so far proven to be the cheapest and cleanest method of increasing octane ratings when blended into traditional fuels. By blending ethanol with gasoline, the fuel burns more efficiently, and fewer premature explosions occur—a phenomenon more commonly known as “engine knock.” Corn ethanol has replaced other products intended to increase octane ratings such as benzene and MTBE, which are not only more costly but also environmentally harmful to the air and water.

Corn ethanol has even become a product for export. In 2014, the US exported over 800 million gallons of ethanol to countries such as Brazil, China, South Korea, and the Philippines. The corn ethanol industry has also made use of the processes byproducts, such as dried distillers grains (DDG) which are commonly used as feed for livestock. In 2015, over 44 million tons of feedstock were produced as a result of the ethanol industry. In a few short years, corn ethanol has become a highly lucrative industry, contributing roughly $44 billion to US GDP in 2015.

When gasoline consumption unexpectedly declined in the US in 2014, the auto and oil industries vigorously raised concerns that the amount of mandated ethanol to be mixed into gasoline would violate the so-called blend barrier—a claim that an ethanol content above 10 percent in fuels will damage engines in most cars. The EPA’s decision, which was also in response to supply shortages from a historic drought in 2012, lowered its initial corn ethanol mandate by 500 million gallons a year to prevent breaking the blend barrier and has lent credence to an idea that many ethanol producers and corn growers reject.

Meanwhile, the EPA’s decision also reflects how current standards have not yet revolutionized renewable fuels. Drafters of the RFS hoped to foster a revolution in cellulosic or advanced biofuels where non-starch biomass could be converted to fuel, which might help mitigate CO2 pollution. Rather than using corn kernels, which inflates the prices of an essential foodstuff, some forms of cellulosic biofuels also use undervalued and underutilized parts of corn plants, such as the cob and stalks. Unfortunately, the past decade of ethanol mandates has not brought about scalable commercial success. As EPA air chief Janet McCabe admits, some of this failure is due to the fact “that technology for advanced fuels, made from cellulosic feedstocks … have not developed as fast as Congress anticipated.”

Part of the discontent with the Renewable Fuel Standard can be attributed to a tumultuous energy landscape. When the RFS was first created in 2005, an ongoing war and rising gas prices made both short- and long-term energy security in the United States a pressing need for lawmakers.

Short term relief, however, ultimately came in a very different form. Since the turn of the century, progressive innovations in hydraulic-fracturing, or “fracking”, has made access to gas from bountiful shale fields commercially viable. As a result, the shale revolution has contributed to declining gas prices, which have slid from highs of $4.13 per gallon to lows well under $2.00 per gallon. While the United States is still far from energy independent, a renewed sense of energy security has helped alter the perceptions and discussion of merits behind a flagging fuel standard.

Simultaneously, environmentalists and oil lobbyists alike have begun to vigorously question the efficacy of the Renewable Fuel Standard’s mandate, a key intention of which was to create an environmentally friendly form of fuel. Specifically, studies that take into account the inputs necessary to produce ethanol have undermined many of the central arguments behind the RFS.

Some scientists have argued that conventional biofuels such as corn ethanol have a comparable or potentially worse environmental impact than gasoline. A 2008 study published in Science found that over thirty years, greenhouse gas emissions will double due to increased inputs and land-use change for corn ethanol production. However, a 2012 study conducted by the Department of Energy found a quite different result, stating that corn ethanol would cut carbon emissions by 34 percent in 2015.

Analyzing the environmental impact of any fuel is difficult. Fortunately, the EPA recently announced that it would be performing its own study to attempt to rectify conflicting opinions about the environmental effects of corn ethanol.This study will be critical because the RFS subsidizes corn ethanol due to its classification as a conventional biofuel, or fuels that have proved to reduce greenhouse gas emissions (GHG) 10 to 20 percent compared to a baseline lifecycle GHG. If research proves that this reduction won’t be realized, then the EPA can act on its own to waive the mandate.

In the meantime, farmers have jumped at the fiscal opportunities presented by inflated demand for corn, regardless of the potential impacts on the environment. As prices have stabilized between double and triple their pre-mandate levels, farmers across much of the Midwest have switched to planting corn or have converted grassland to corn fields (and sometimes both). In the Western Corn Belt, which covers five states and accounts for half of all corn produced in the US, roughly 1.5 million acres of grassland have been converted to soy or corn since 2006.

Most prominently, the country’s largest corn and ethanol-producing state, Iowa, has witnessed nearly 376,000 acres of grassland converted into corn or soy fields—which are often grown in rotation with each other—by just 2011. Given the region’s long history of corn production, it should be unsurprising that the majority of this converted grassland and new corn fields have been in previously overlooked, suboptimal areas around the fringes of the core corn-growing regions.

To mitigate the risks associated suboptimal growing conditions, some farmers have turned to using increasing amounts of chemicals. Buoyed by a 10 percent increase in nitrogen fertilizer use and an 18 percent increase in herbicide use on corn between 2005 and 2014, both agricultural chemical and fertilizer expenditures in Iowa have seen astounding increases—in the same period, chemical expenditures jumped from $580 million to $1.08 billion while fertilizer expenditures ballooned from $930 million to $2.3 billion. Moreover, between just 2005 and 2010, freshwater withdrawals for irrigation in Iowa jumped from 33.3 million gallons of water per day to nearly 43 million gallons per day, an increase of over 22 percent. 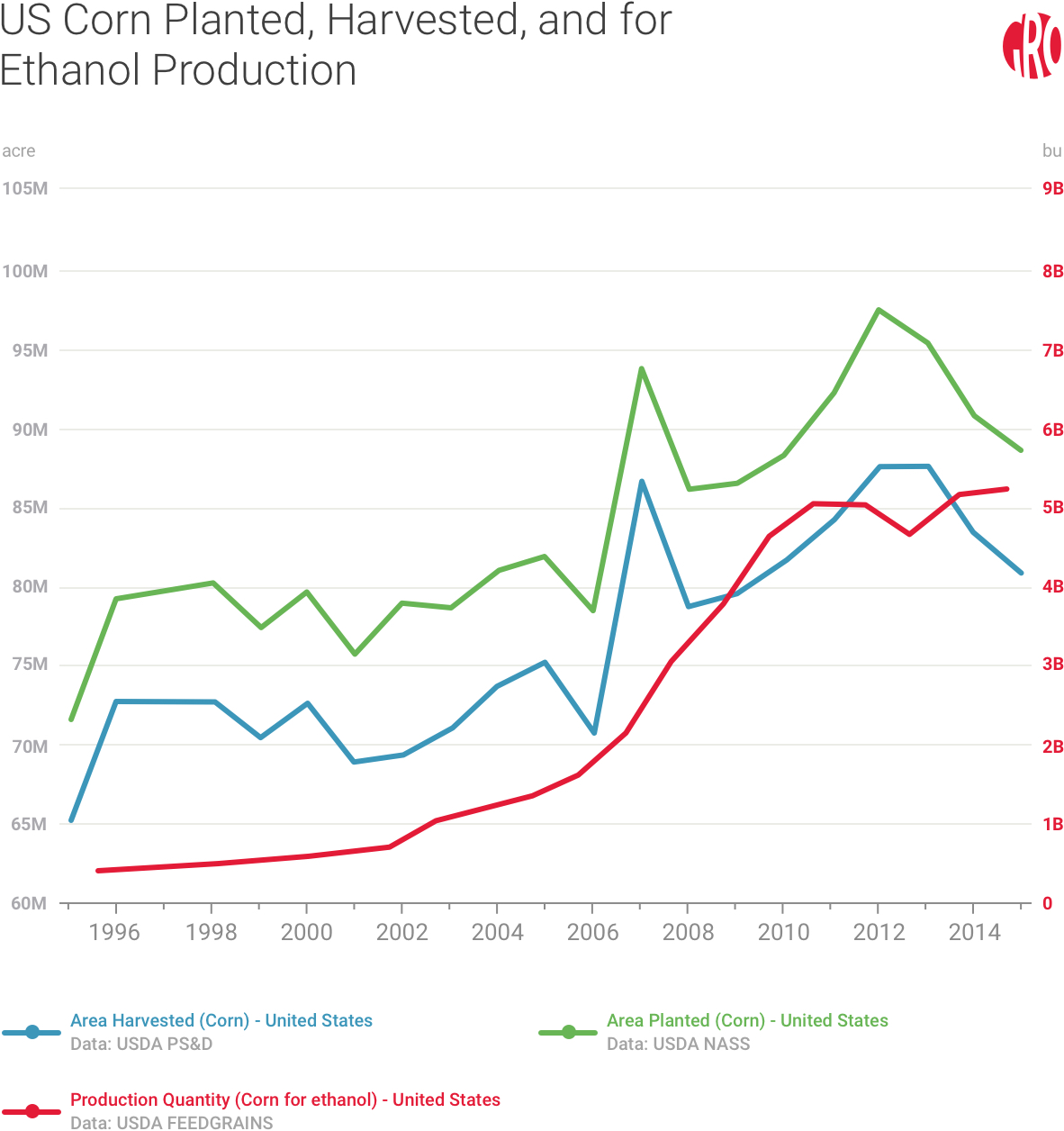 Regardless of the result of the EPA study, conventional biofuels likely won’t completely replace fuel as we know it. The Congressional Budget Office has already stated that corn ethanol has only “limited potential” for reducing carbon emissions. Furthermore, the founding principles of the 2005 Renewable Fuel Act were based on the assumption that advanced biofuels would carry the day and become the major form of biofuel produced in the US. The major report put out in the National Resource Defense Council that provided the justification for the act has warned that corn ethanol would simply “replace one set of challenges created by oil with another” and instead placed faith in using switchgrass, the native plant of the Midwest, as a source for advanced biofuels.

The large supply of nitrogen fertilizer needed to produce corn is just one of the many “sets of challenges” that would arise if the US attempted to use corn ethanol as its main form of fuel. Nitrogen fertilizer and its systematic overuse causes a host of problems including destroying the soil that it enriches, creating dead zones in water, and contributing greatly to global warming.

Thus, with bills ranging from complete repeal to minor modifications being proposed recently, the Renewable Fuel Standard is likely to change in the future as the government hopes to create a program that facilitates the development of a truly sustainable and environmentally responsible fuel source.

Will the corn bubble pop?

Depending on the outcome of the forthcoming EPA report, two likely scenarios emerge.

First, if the study definitively finds that corn ethanol is in fact at least 10 percent more efficient than traditional petroleum-based fuels, ethanol production and consumption will mostly continue unabated. Currently, both major US presidential candidates have expressed support for the mandate, making a top-down change unlikely., In this case, environmentalists may even attempt to ramp up support for other more environmentally friendly forms biofuels, such as cellulosic ethanol, in an attempt to spur their commercial viability.

Second, if the study finds little environmental benefit from either corn ethanol or the Renewable Fuel Standard as a whole, consensus will quickly build among environmentalists, oil companies, livestock farmers, grocery manufacturers and politicians alike to repeal or lower the law’s mandate. In this case, although corn futures might take a momentary hit, US corn ethanol production will not disappear. As mentioned previously, corn ethanol has become a highly lucrative industry in just the past decade, contributing roughly $44 billion to the US GDP in 2015, as a result of having taken advantage of the federal subsidies. Due to a reliance on 800 million gallons of exported ethanol, and both domestic and international feed byproduct demand, the ethanol industry is likely to survive even a full repeal of the mandate.

With or without the mandate, and thus the blend wall, ethanol still provides a benefit to gasoline-operated cars by functioning as an octane-booster. The detrimental effects of MTBE and benzene use assure that corn ethanol will still be the preferred oxygenate for fuel. The Energy Information Administration (EIA) projects that daily gasoline use will decline only 100,000 barrels to 9 million barrels per day between now and 2020. Converting for the number of gallons in a barrel and the number of days in a year, US gasoline demand will decline slightly to 137.5 billion gallons a year. Depending on the political status of the RFS, federal authorities or the free market may decide that a blend barrier anywhere between 3 percent and 10 percent is the optimal amount of corn ethanol in gasoline for car engines.

Assuming the US continues to export about 750 gallons a year and that the USDA’s conversion of 2.8 bushels of corn per gallon of ethanol generally holds true, corn demand for ethanol in the United States could be anywhere between 1.7 billion and 5.1 billion bushels of corn in 2020 and 1.6 billion and 4.9 billion bushels by 2025. In a 5 percent blend wall scenario, as already seen in Sweden, corn demand for ethanol is likely to drop 2.5 billion bushels by 2025 at an absolute maximum—a significant amount, but still well above pre-mandate levels. In other words, despite the vacillating tides of the global and US energy landscape, corn ethanol is likely to weather whatever storm proves to be on the horizon.