Saving the Planet, and Your Big Mac Too

Saving the Planet, and Your Big Mac Too

China, India, Brazil, the United States, and Indonesia are the top five polluting countries for agricultural greenhouse gases, but the sources of their emissions vary. In China, nitrogen fertilizer use and rice cultivation account for 45% of the country’s nearly 700 million tonnes of agricultural greenhouse gas emissions as of 2016, the latest data available. China’s rampant overuse of fertilizers and its big share of global rice production push emissions from crop growing well above those from raising livestock, which accounted for 24% of total pollutants. 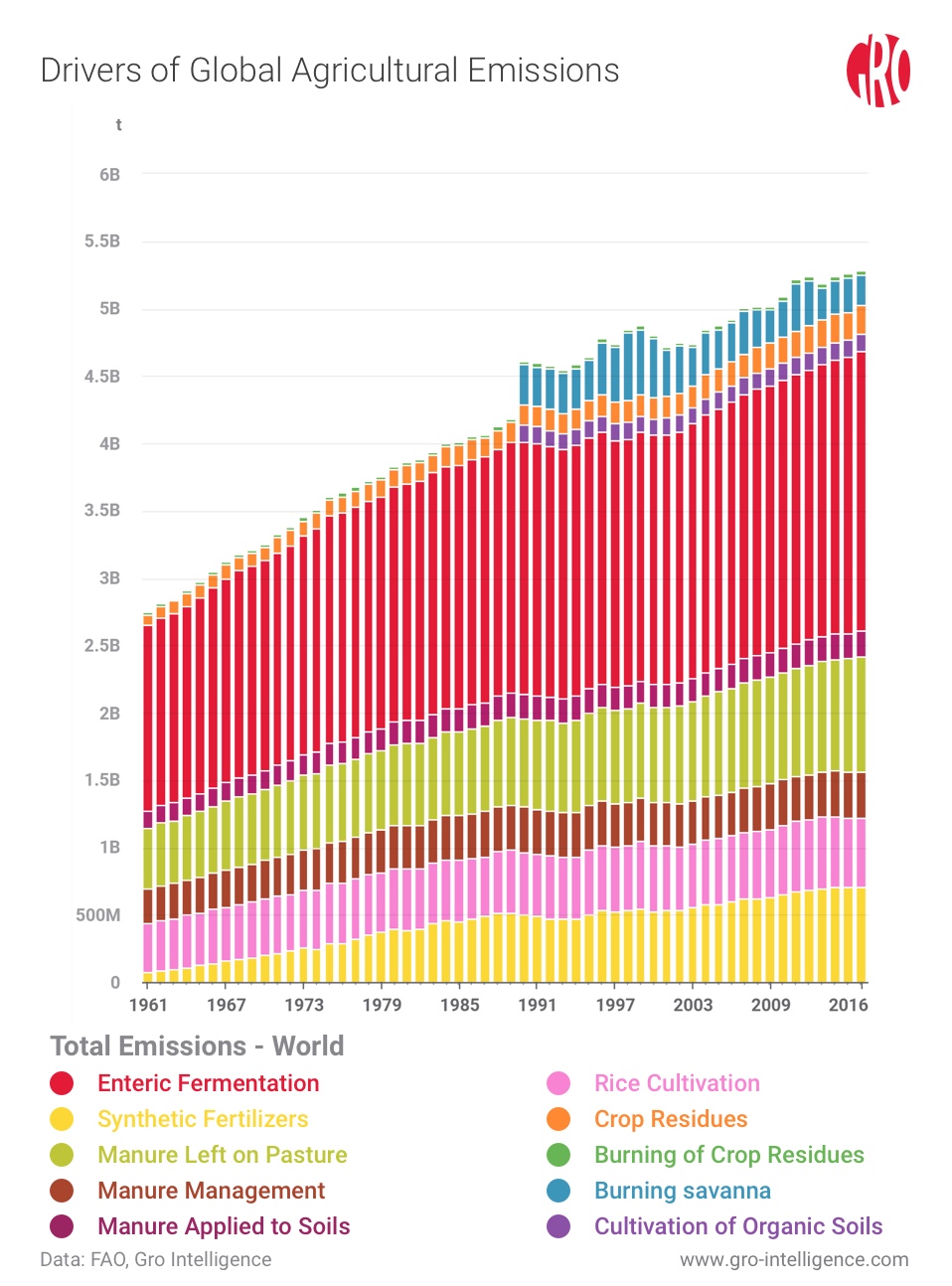 Raising livestock is the biggest cause of agricultural greenhouse gas emissions, including from enteric fermentation and manure. Rice cultivation and synthetic fertilizer use are also major contributors.

Indonesia is the world’s third-largest rice producer, and emissions from that sector contribute 37% of the country’s 170 million tonnes of agricultural greenhouse gases. Most greenhouse gas emissions from rice cultivation result from the decomposition of organic matter in rice paddies, which produces methane gas.

In India, Brazil, and the US—among the world’s largest beef and dairy producers and exporters—greenhouse gas pollutants stem largely from livestock raising. The biggest problem is enteric fermentation, a normal digestive process in animals that produces methane. Enteric fermentation accounts for 45% of India’s agricultural greenhouse gases, 60% of Brazil’s, and 35% of those in the US. In all, manure management, animal processing, and enteric fermentation of livestock contributed emissions of 3.5 billion tonnes of CO₂ equivalent in 2016.

Feeding a growing world population, while averting dangerous degrees of climate change, will require radical changes in how food is raised and what people eat, a recent research paper concluded. The paper, published in the journal Nature, found that the average person will need to eat 75% less beef, 90% less pork, and half the number of eggs, while at least tripling consumption of beans, pulses, nuts, and seeds.

Other scientists, including at the Colombia-based International Center for Tropical Agriculture (CIAT), have been looking at ways to reduce agricultural greenhouse gas emissions while still producing enough meat and dairy to satisfy demand-growth expectations.

Although much of the world’s cattle consume grain as their main food source, pasture-feeding is widespread in many countries in Central and South America and Africa and in Australia. Switching to more-nutritious pasture-grass varieties has been found to reduce greenhouse gas emissions per unit of beef and cow milk produced. Deep-rooted grass varieties also can sequester much greater amounts of carbon than naturally occurring grasses, according to a 2010 research paper published in the Proceedings of the National Academy of Sciences.

One grass genus that has been widely studied as a more efficient feed is Brachiaria. Studies cited in the research paper found that Brachiaria-fed cattle produce up to three times as much beef and milk as traditionally raised cattle, allowing for a smaller overall herd size. Adoption of new grass varieties, along with other changes to livestock management recommended by the researchers, could result in an overall 7% reduction in greenhouse gas emissions from livestock in Central and South America. More realistically, emissions could be cut by about 4%, based on historical adoption rates of new techniques.

“Agriculture and livestock in particular are likely to be required to play a much greater role than they have hitherto in reducing GHG [greenhouse gas] emissions,” the researchers wrote.

Another study in Brazil, conducted in 2012-2014 in collaboration with Imaflora, an environmental NGO, found even greater potential for reducing greenhouse gases through improved feed mix and better pasture management, such as alternating land use between crops and livestock. The study, which tracked five separate cattle farms, found a doubling in beef production and a 60% decline in the amount of emissions produced per kilogram of beef. Imaflora noted that Brazilian government subsidies have helped to restore damaged pasture in the country and that educational efforts have contributed to a fourfold increase in Brachiaria seed sales from 2010 to 2015.

Reducing antibiotic use in livestock, which is administered to prevent disease, also might decrease greenhouse gas emissions. Research published in Proceedings of the Royal Society in 2016 showed that manure of cattle given antibiotics can produce nearly twice as much methane as that of untreated cows. In addition, the antibiotic residues in dung lessen the natural ability of dung beetles to reduce emissions from manure.

Boosting rates of carbon sequestration in soil and pastureland can go a long way to reducing agricultural greenhouse gas emissions. Indeed, a practice called multipaddock grazing, which involves grazing cattle for short intervals in several fields, can more than offset greenhouse gas emissions produced by the livestock themselves, according to a 2018 study published in Agricultural Systems. Multipaddock grazing aims to protect soils from erosion and promote more forage recovery than continuous grazing, where cattle feed off of the same pasture for an entire season.

In the US, grass-fed beef represents just 3% of the total US beef market, partly because it requires more land than feedlots. But the practice if expanded could help slow the rise of greenhouse gas emissions.

Crop production contributes one-third of global greenhouse gases from agriculture and is the biggest such pollutant in several countries. China applies nitrogen fertilizers, which emit nitrous oxide into the atmosphere, at a rate 25% greater than the worldwide average. Applying appropriate amounts of nitrogen to soil could decrease greenhouse gas emissions without compromising crop yields, as would greater use of rotational planting of corn and soybeans to fix atmospheric nitrogen.

Rice growing also generates large quantities of greenhouse gases, especially in China and Indonesia. Researchers have tested alternative rice production methods that involve draining water from rice paddies during the growing season to reduce methane emissions. One method, called System of Rice Intensification, requires less water and chemical use, but more manual labor to support crop growth and weed control. The technique has caught on in some countries, but some critics say that claims of higher yields are overstated.

Emissions caused by cropland burning, a traditional method of clearing and fertilizing, have fallen by nearly half in the past two decades. Studies have shown that controlled burns early in the dry season, when the land is less arid, can lead to a reduction in methane and nitrous oxide emissions, as well as fewer unplanned fires.

Modeling Emissions, a Gro Use Case

Currently available data on greenhouse gas emissions makes it difficult to track greenhouse gas emissions in a timely manner. The data, reported by the UN and other agencies, generally represents annual averages and is published with a lag of about three years. Data available in Gro, however, could be used to keep up-to-date on important factors affecting emissions levels and to build predictive models to be used with market-based approaches to curbing carbon pollution.

For example, data on livestock herd size in the Gro platform can be used together with methane-conversion ratios from the US Environmental Protection Agency to estimate total enteric fermentation in each country by animal type. Gro also has extensive data on planted area of various crops, including rice, which can enable our users to estimate emissions from rice cultivation and decomposition of crop residues. Emissions from nitrogen-fertilizer use also can be calculated from our data on nitrogen-fertilizer application rates. The Gro platform also has extensive satellite data that can help identify savanna and other areas where crop residue is being burned.

The agriculture industry is a major contributor to global greenhouse gas emissions. As the world’s population grows and incomes rise, more and more resources will be needed to meet global demand for calories and protein. Altering dietary habits to promote a healthier planet is a worthy endeavor, but there are also supply-side practices that can contribute to mitigating greenhouse gas emissions from agriculture. For a complex problem such as climate change, it is important to look for solutions in all areas of the food system.